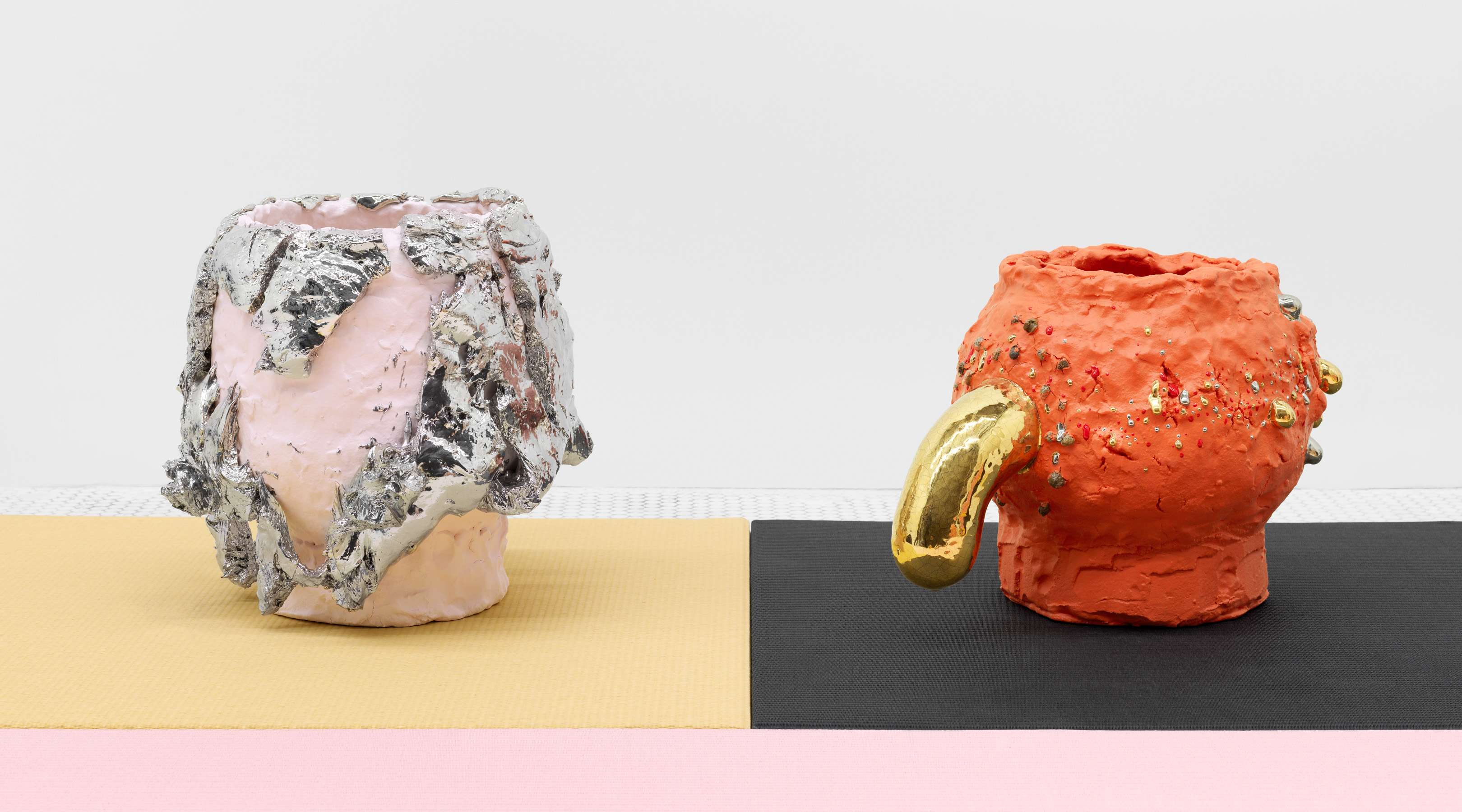 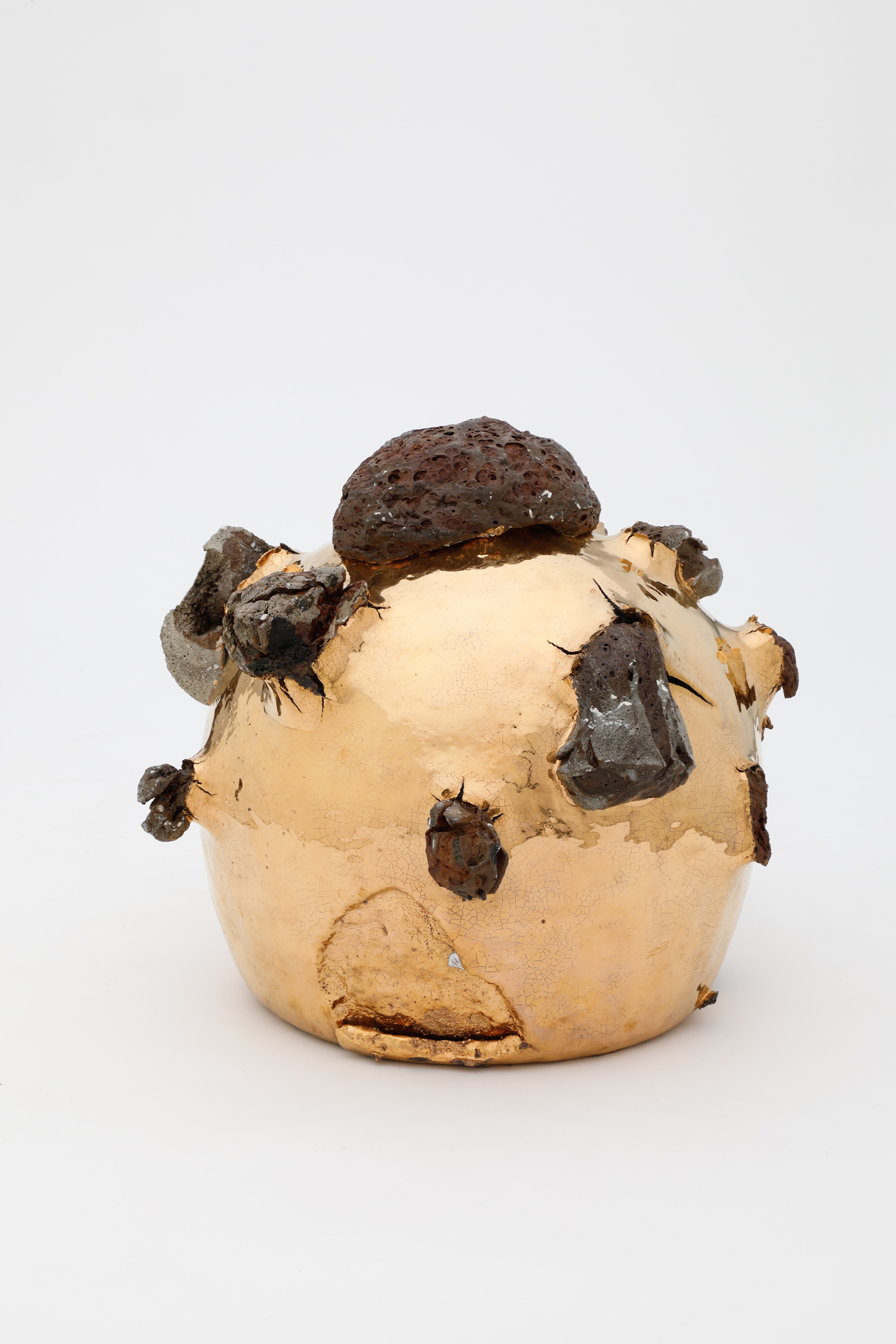 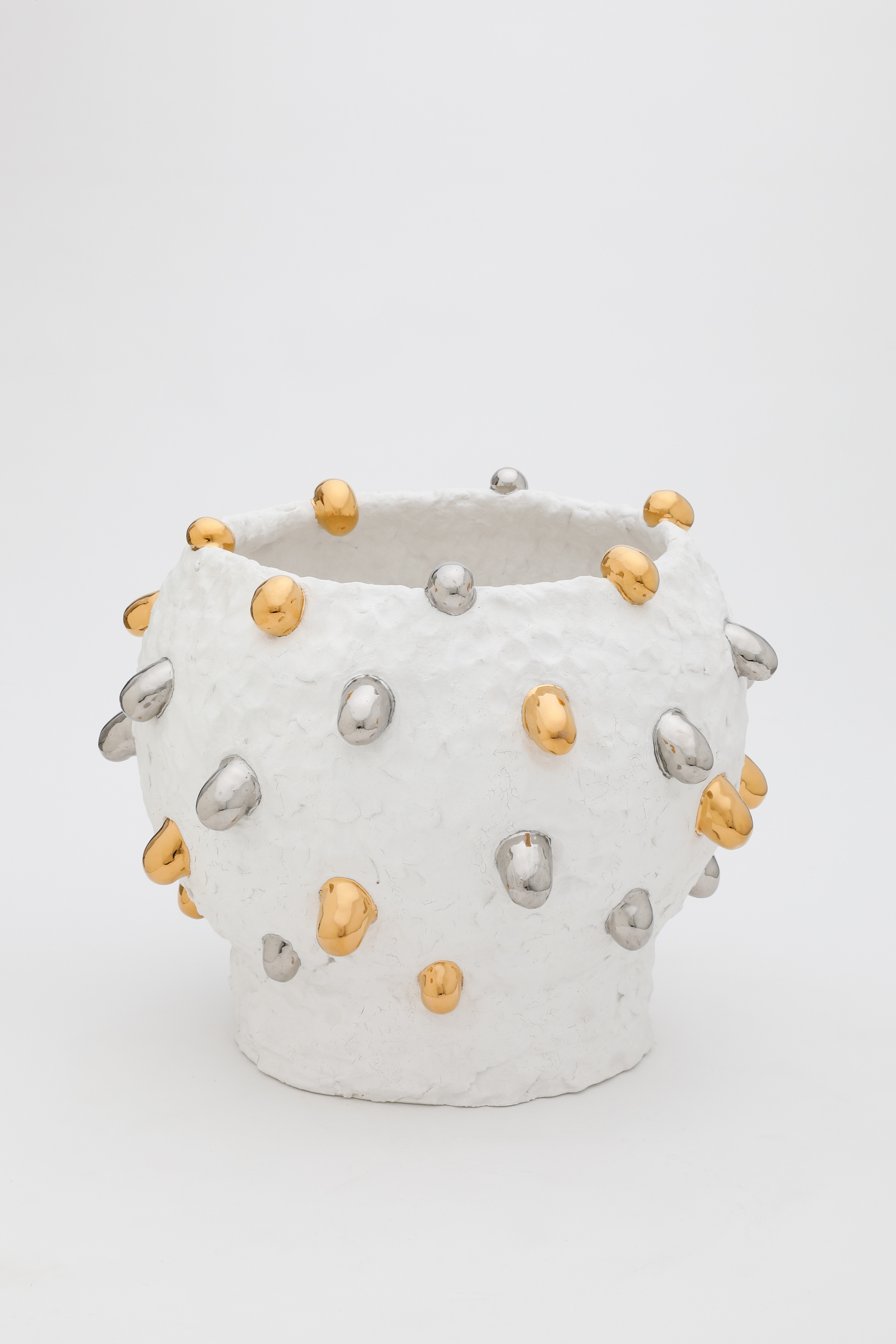 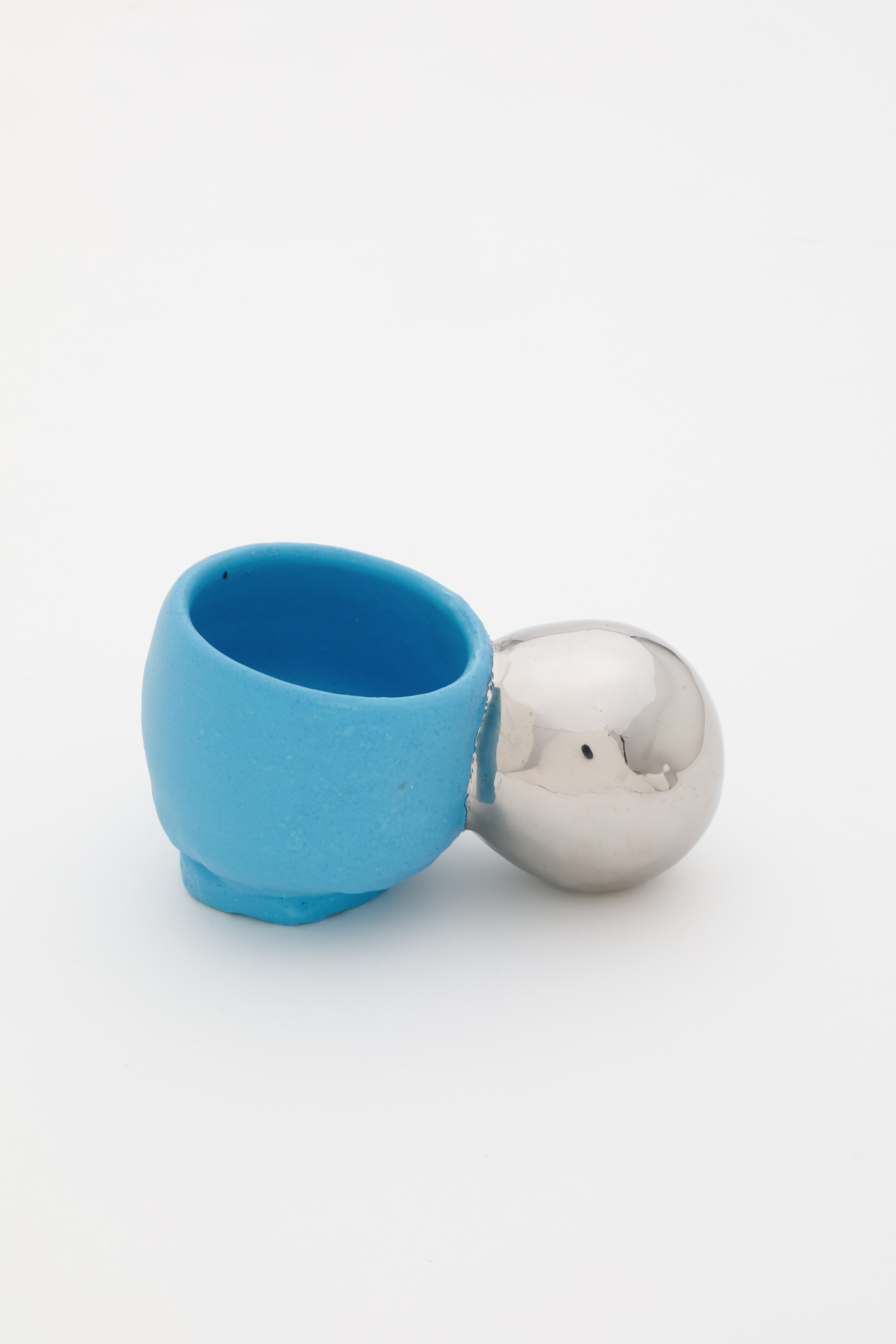 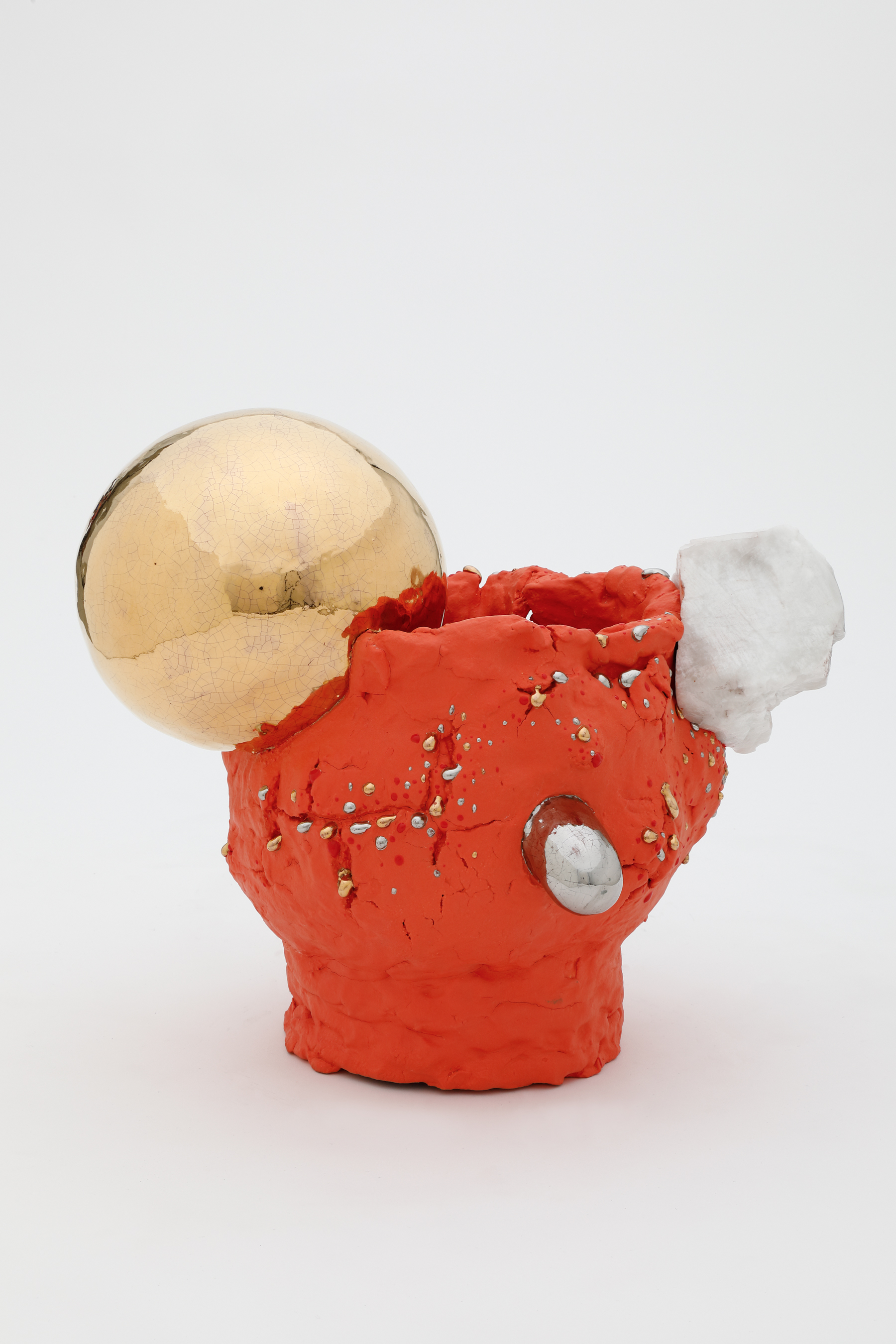 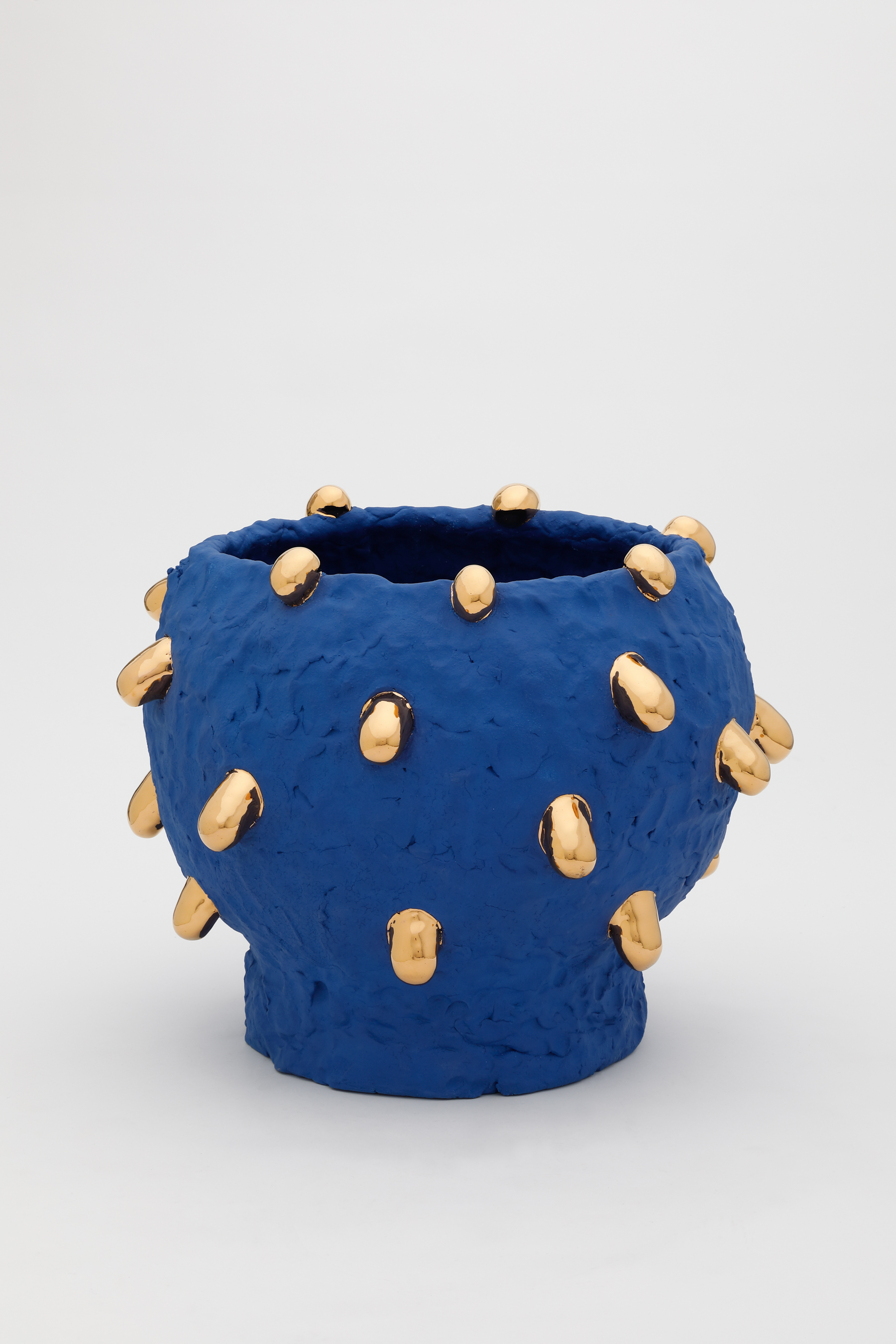 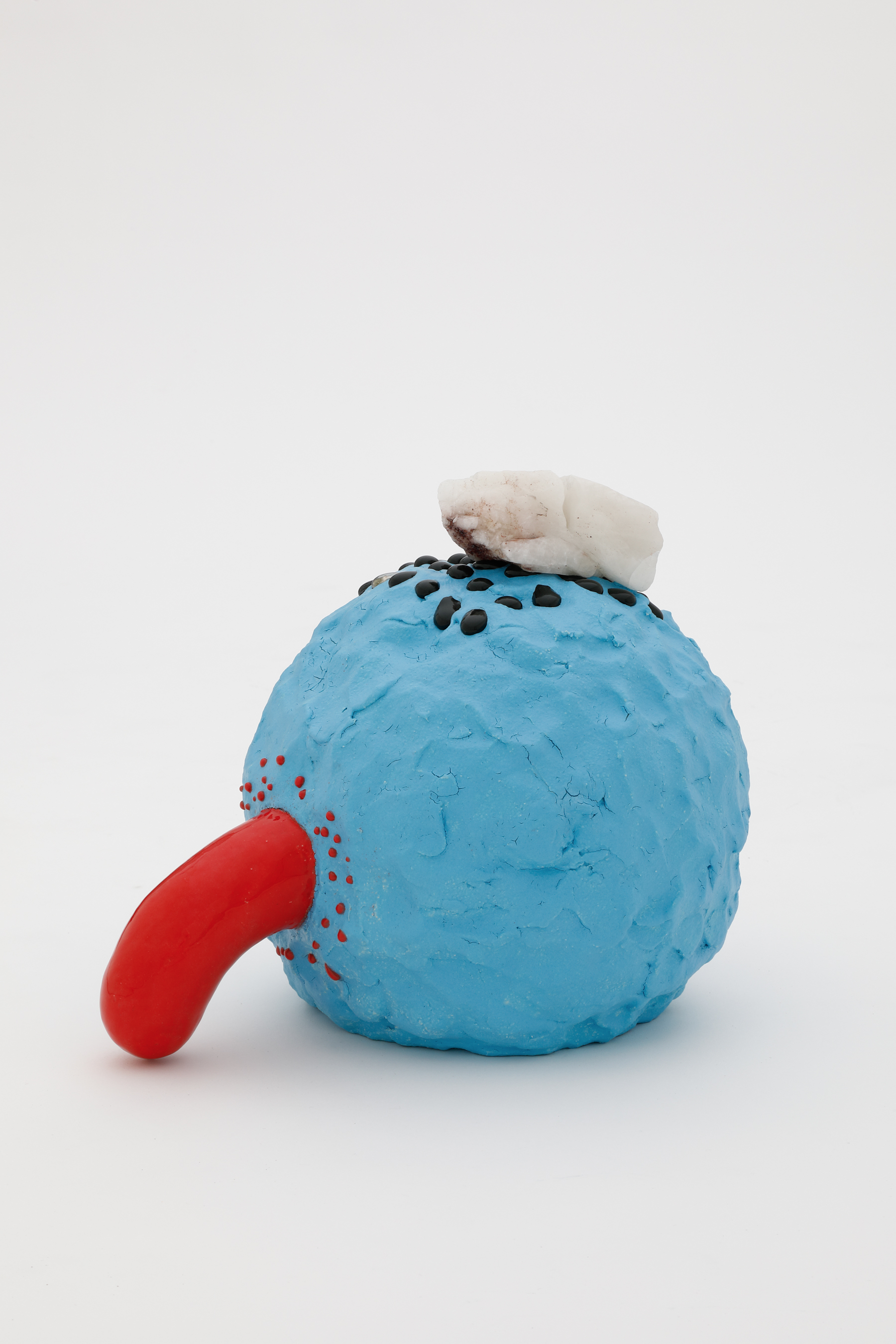 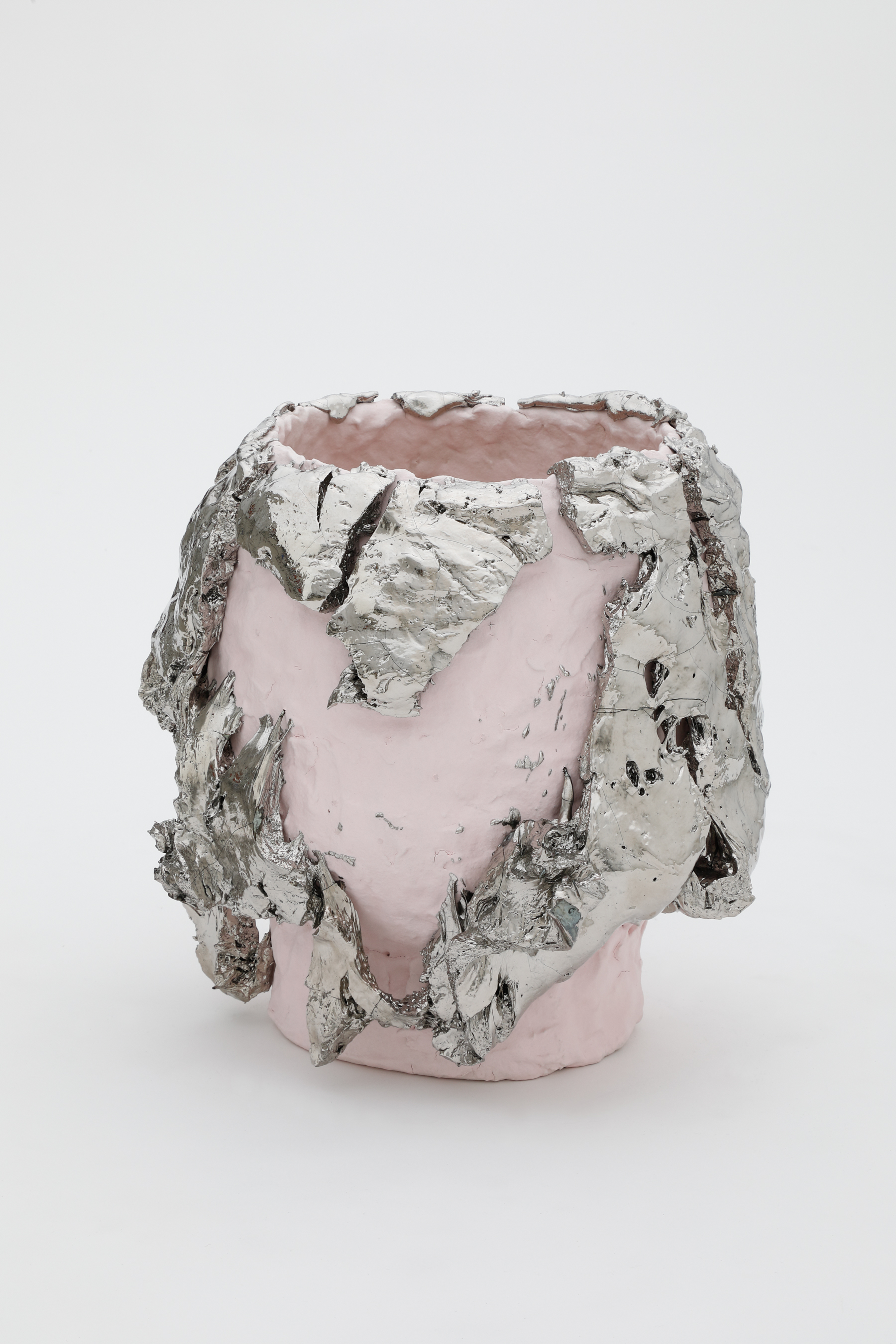 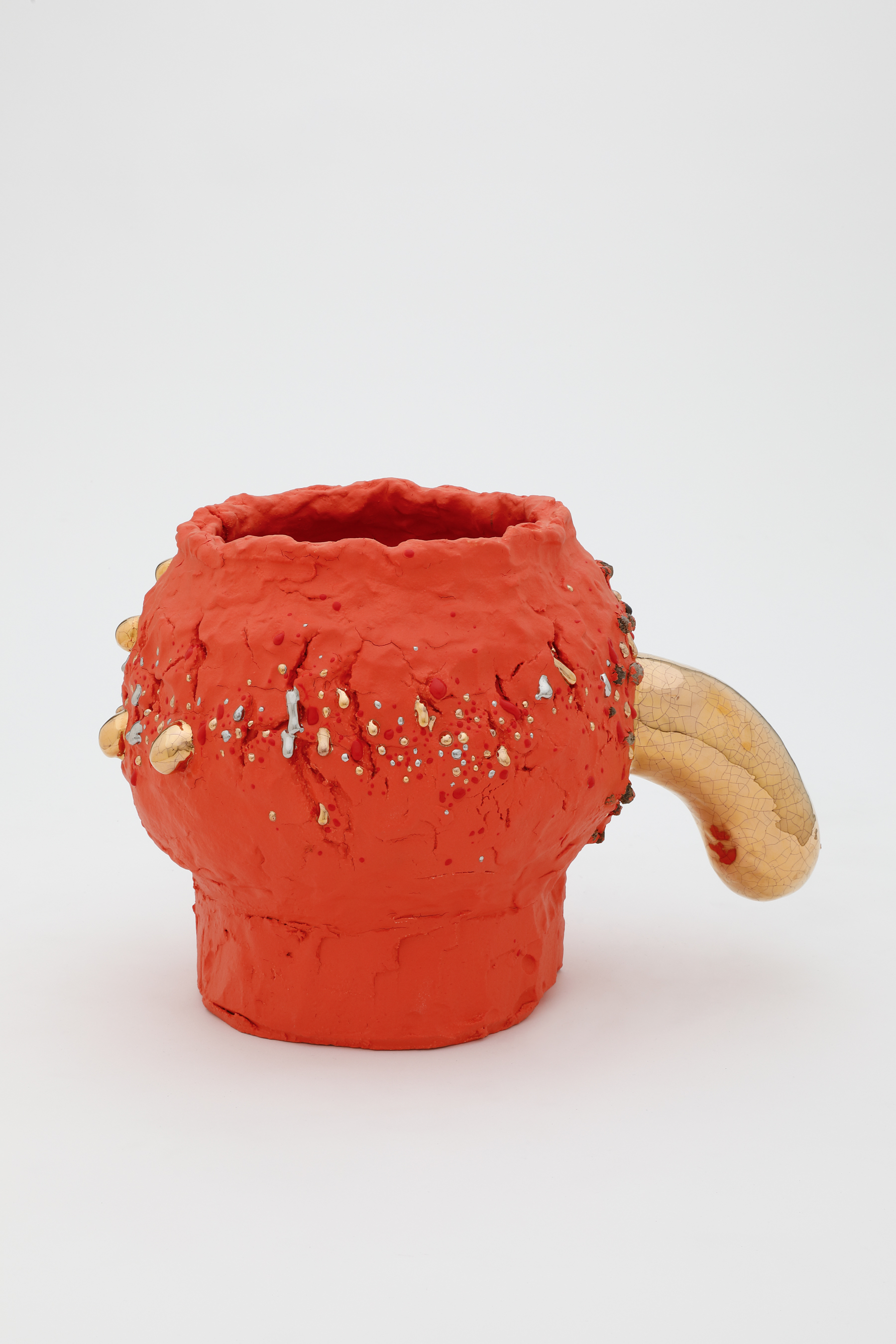 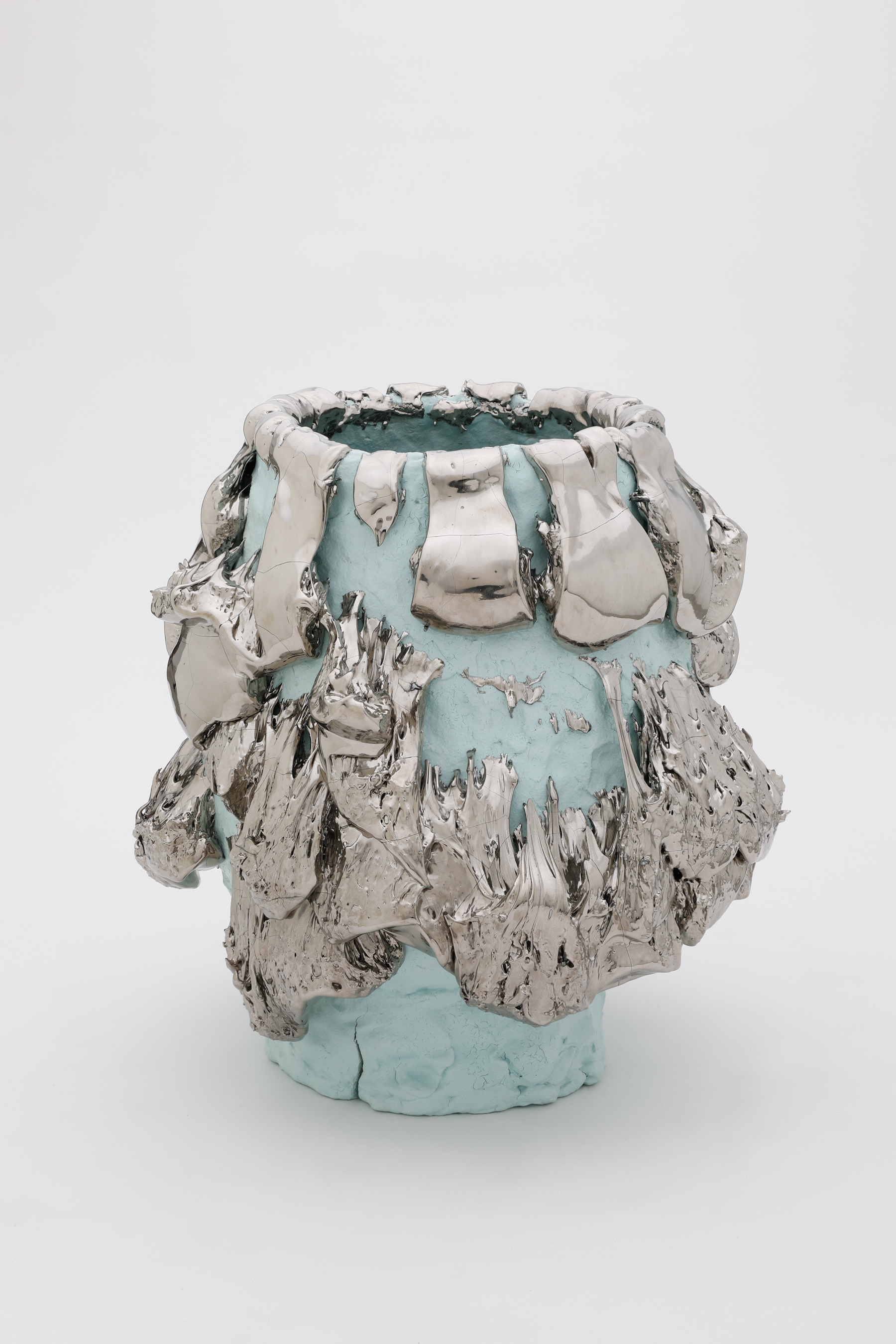 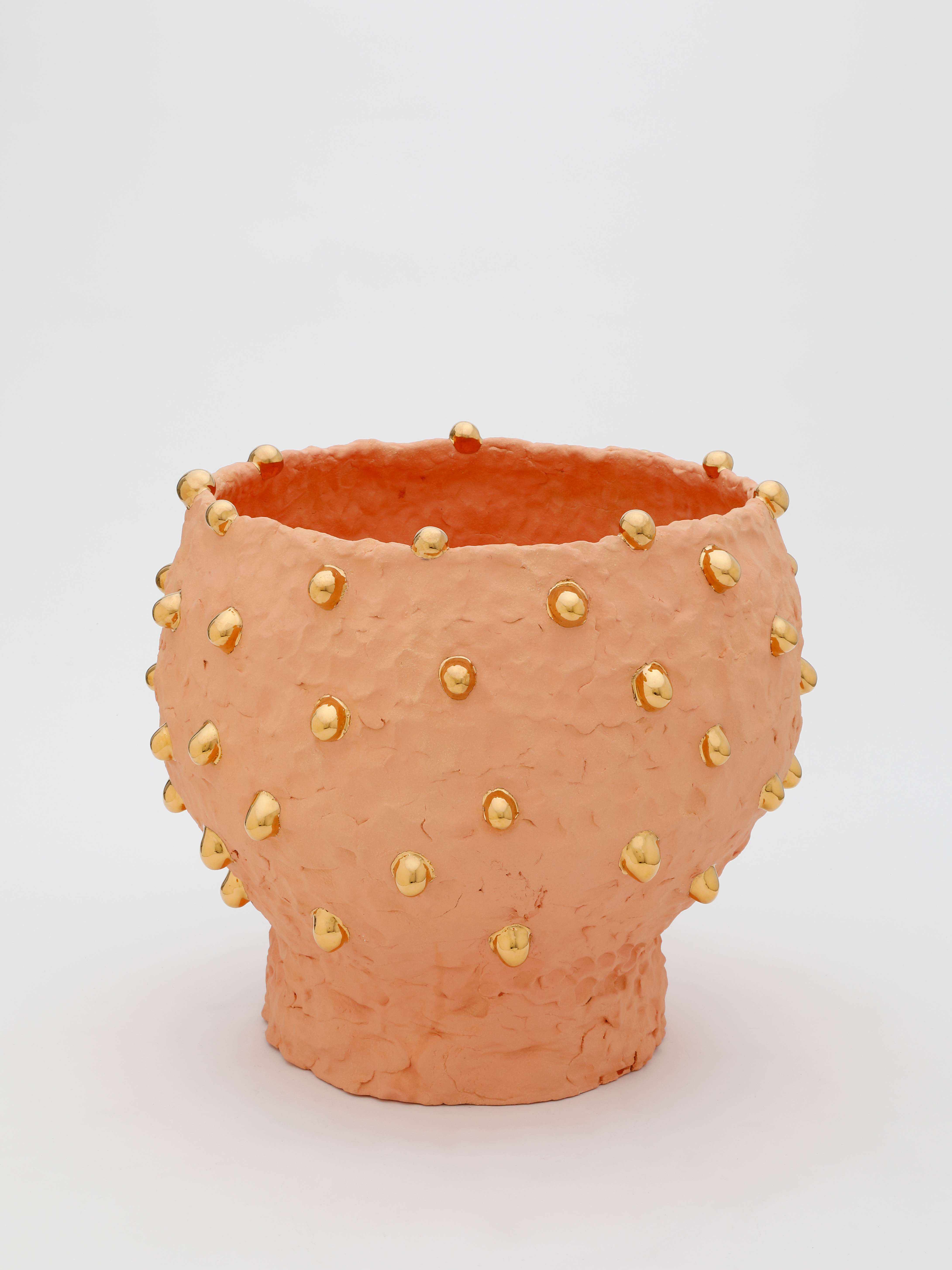 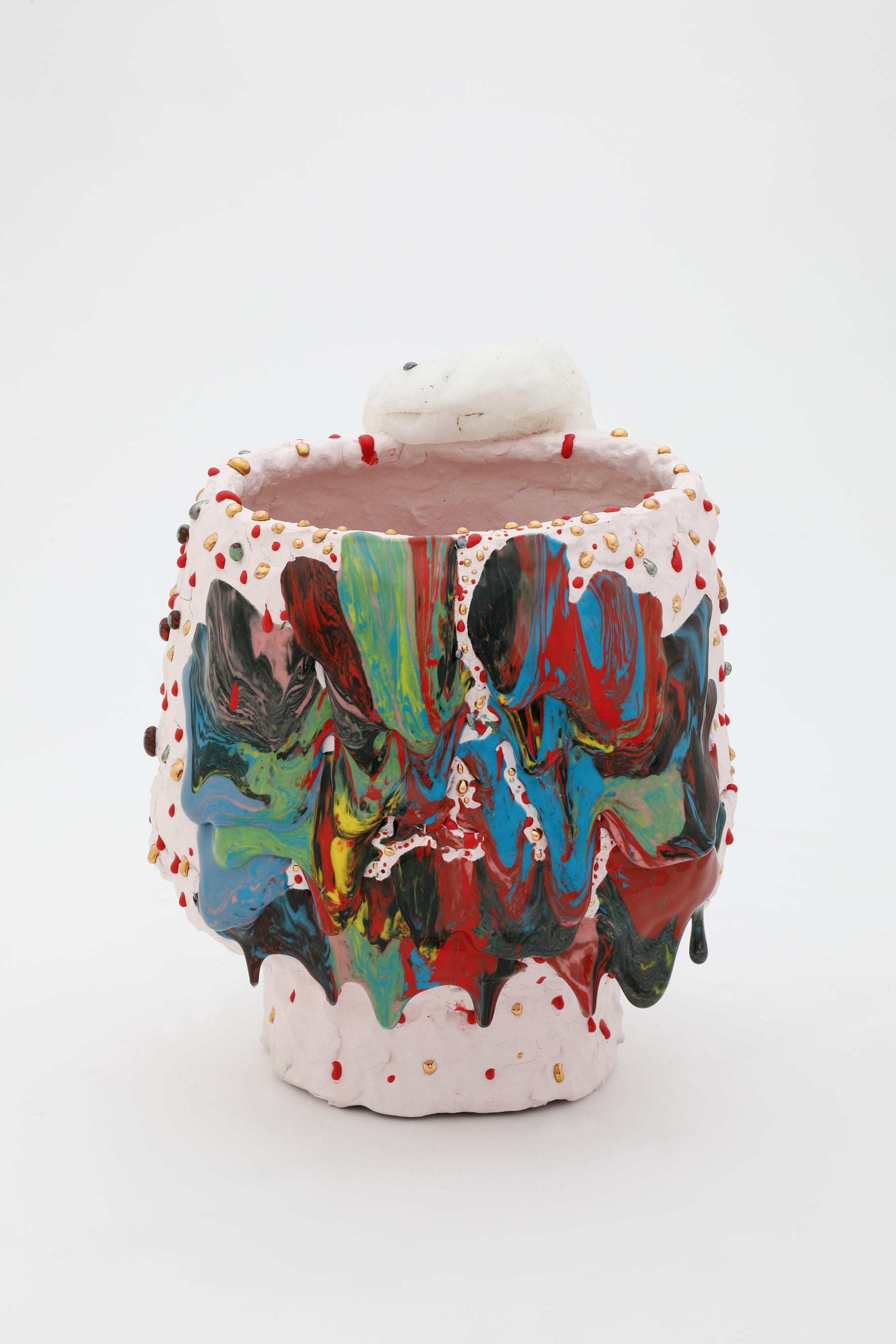 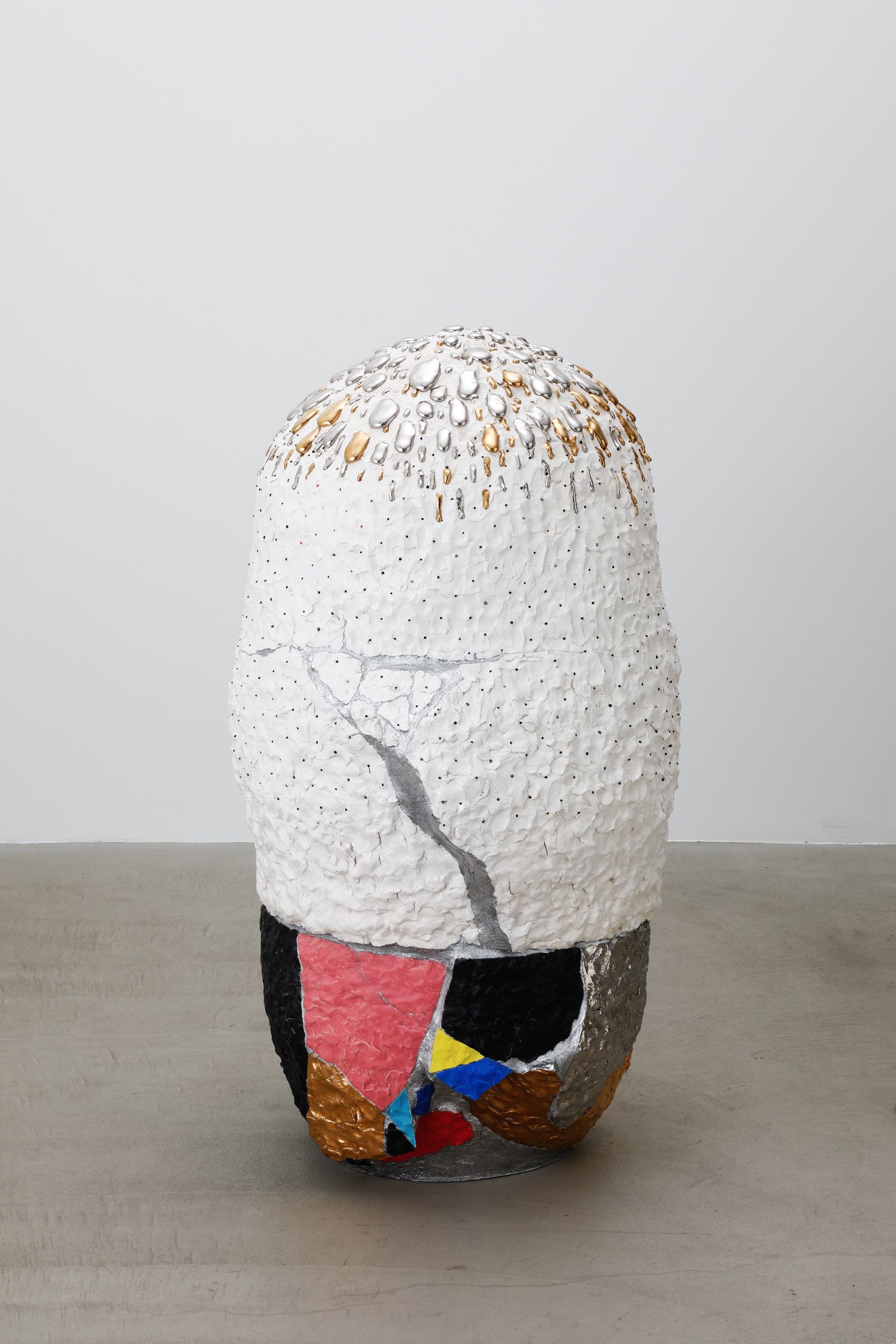 The act of handling, and feeling with my own hands a new interesting material, witnessing the transformation during and after a firing is important to my creative practice. The experience of touching the materials and the process provide inspiration for new works. More, it allows me to recall how I felt the earth when I was a child, as I take back some of that energy. A sculpture might come out of the kiln warped into a shape different from when it went in. I enjoy the transformative part of this process. — Takuro Kuwata, 2021

Installed in the ground floor Brick Room of 3 East 89th, this exhibition is our fourth with Takuro Kuwata (b. 1981, Hiroshima, Japan). Inspired by his 2019 exhibition at the Kiyomizu-dera Temple in Kyoto, Takuro Kuwata: Zungurimukkuri presents new work in which tatami function as a pedestal. For Kuwata, the exhibition space and the ceramics studio are both spaces for ritual; each are sites for his ongoing performance of reinventing the ancient shape of the tea bowl.

Kuwata is a serious student of chanoyu, the Japanese tea ceremony. He deploys many of the characteristic features of teaware in his work: asymmetry, intentional cracking and drips, and the celebrated technique of kintsugi, in which breaks are repaired with gilt lacquer, drawing attention to their chance beauty. In Kuwata’s work each of these aspects is heightened and exaggerated to punk extreme. Instead of the gentle wonkiness of traditional teawares, his compositions often lurch sideways, drunk on their own energy. His surfaces are deeply fissured, and instead of a single drip down at the base (as is common in historic kairagi glazed pots), Kuwata’s works feature a whole surface full of pendulous drops whose bright metallic luster glazes refer to kintsugi without literally replicating it. In one work, the large Untitled (2021), a fifty-inch-high linga, Kuwata embraces the cracks that had happened during the first firing, brightly coloring and infilling them before refiring.

As these various transformations suggest, Kuwata is not interested in simply perpetuating the past. “The Japanese used to sit on the floor; now we sit on chairs,” he points out. “Our culture is always changing—our pottery should too.” It is a telling analogy, for Kuwata is also strongly influenced by Western culture. He dates this back to a trip he took to London in his early twenties. Like Dorothy in Oz, he could not get over how colorful everything was, even the seating on the Underground. When he returned to Japan and headed home on the Shinkansen, everything seemed muted in comparison. He identifies Western abstract painting, with its bold, take-no-prisoners palette, as an important point of reference.

Yet if Kuwata’s work stages a head-on collision of worlds – tea ceremony in Technicolor – it is also more than the sum of those parts. He shows that rigorous experimentation is not incompatible with sheer pleasure (the laugh-inducing quality that the Japanese call tanoshii). And his most recent work is his most adventurous yet, with elements that emerge unbidden from its walls. For Kuwata, these improbable forms are a development of the drips that have long festooned his surfaces—he is always interested in the dynamics of growth, and the possibilities of scale shift. His works have a Surrealist quality, as if his pots had sprouted poking fingers or lolling tongues. A contrary note is provided by his incorporation of slabs of feldspar, a mineral that is ground up and used in many ceramic glazes, including kairagi. By incorporating this raw material into his compositions, Kuwata underscores his ongoing commitment to fundamentals, the means of his own production.

It’s a typically counterintuitive move for this most unpredictable of contemporary ceramists—an artist for whom accident and intention seem to have fused, becoming a generative method, equally connected to the historic Japanese wabi ideal (the acceptance of imperfection) and Dadaist chance operations. Kuwata lodges himself at such cross-cultural meeting points, making work that faces in multiple directions at once. Deadly serious and delightfully slapstick, slyly elusive and sparklingly gratifying: Kuwata is all these things and more. There’s not another like him, anywhere.

Takuro Kuwata was born in Hiroshima Prefecture, Japan in 1981, and is currently based in Gifu, Japan. Following his graduation from Kyoto Saga University of Arts in 2001, in 2002 he began studying under ceramic artist Susumu Zaima. In 2007, he graduated from the Tajimi City Pottery Design and Technical Center. His works have been exhibited globally in cities such as Brussels, London, and New York, and he was a finalist for the LOEWE Craft Prize 2018. Kuwata’s works have been acquired by various international public collections including the Rubell Family Collection, the Palm Springs Museum, the Boca Raton Museum of Art,the 21st Century Museum of Contemporary Art, Kanazawa, and the University of Michigan Museum of Art.

In the fall of 2021, his work will be featured in the exhibition The Flames at the Museum of Modern Art, Paris.