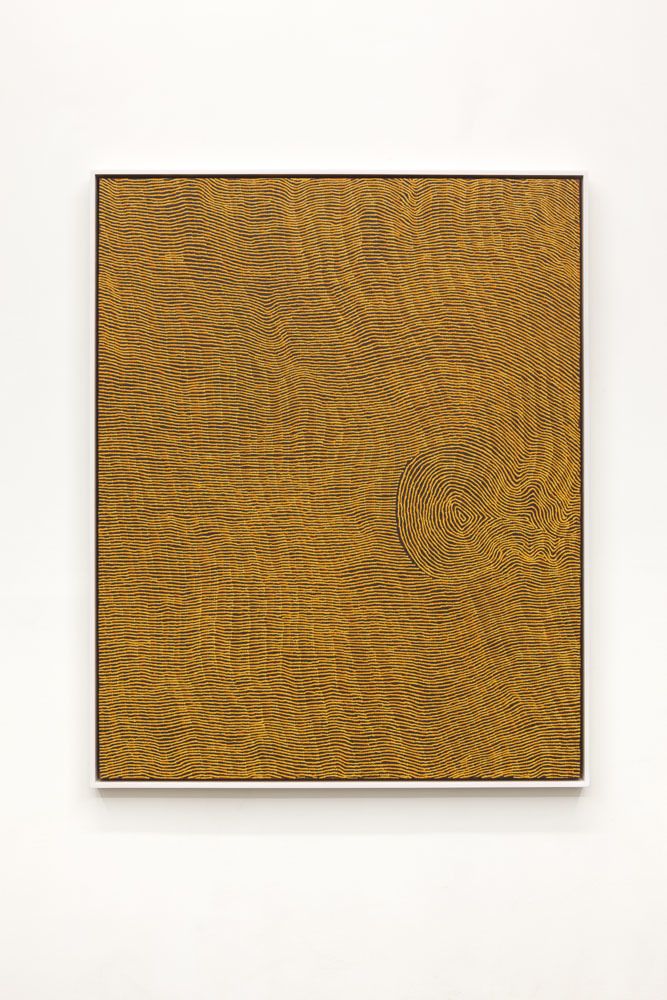 Ten years after New York University’s landmark exhibition Nganana Tjungurringanyi Tjukurrpa Nintintjakitja: We Are Here Sharing Our Dreaming, Salon 94 is pleased to present the first US solo exhibition of one of its featured artists, Yukultji Napangati. Celebrated in her native Australia as a leading figure of the contemporary Aboriginal painting movement, she has received numerous awards including the Art Gallery of New South Wales’ 2018 Wynne Prize for Landscape Painting. This exhibition focuses on a series of paintings which connect tradition, mythology, and personal history with contemporary landscape practice. Country and canvas become intricately connected in a dialectical dance of pulsating tonal compositions and potent cultural signifiers.

For more than twenty years, Napangati has created gorgeous, shimmering paintings which evoke the vast Western Desert where she was born. Minimalist in palette and formally abstract, her epic paintings draw on ancestral myths that were passed down to the artist from her mother and her mother’s mother – their “Dreamings”. These narratives told again and again, are symbolically embedded in the architecture of the interconnected lines and dots that cover the picture plane. Her paintings feel sequential, as if one begets another, yet each holds a dynamism and rigor all to its own.

The country that Napangati paints is the remote Gibson Desert in Western Australia, north of Kiwirrkurra near the great salt lake Wilkinkarra (Lake Mackay), the heart of the Pintupi homelands. She was born there and lived nomadically with her small family of nine until the age of fourteen, when they were sighted and subsequently reunited with her Pintupi kin. Making national headlines as the last of the desert nomads, “The Lost Tribe” (or “Pintupi Nine”) generated a media sensation when they were discovered in October 1984 living independently and without contact to the outside world. But despite the attention, they insisted that they were not lost, merely living off the land as their ancestors had for millennia.

Yukultji Napangati began to paint in 1996, as part of a burgeoning initiative amongst Pintupi women to create work independently of their male relatives. It had been nearly 25 years since the founding of Papunya Tula Artists, the community art center established in 1972 that heralded the birth of the contemporary Aboriginal art movement in Australia. During those first two decades, there were only “painting men”, although women sometimes assisted their husbands or other close male relatives with a painting’s background. Women began to paint collaboratively, and then on their own, bringing confidence, skill and a renewed energy into Western Desert painting. Most importantly, they found a unique and powerful means to express and preserve their cultural inheritance, and in so doing, develop an aesthetic language all of their own.

Napangati’s paintings often depict the land associated with her Dreamings such as the site of Marrapinti located to the west of Kiwirrkura where a large group of ancestral women camped at a rock hole and performed ceremonial activities before continuing their travels east. In these works, nature is transposed into sinuous, undulating lines, sometimes interrupted by amoeba-like forms which disrupt the rhythmic totality of the composition, creating a fissure – a new story line. Even in the more Minimalist linear compositions, her mark making wavers between small tight strokes and slightly looser indentations, which create the odd impression that the paintings are breathing. While this is a result of their visual opticality, Napangati’s deft combinations of color, line and form create complex, living landscapes that are far removed from the tradition of Op Art made famous by Bridget Riley and Victor Vasarely. For Napangati, the physical cannot be separated from the emotive and symbolic references within the work and the world outside. Her practice is both particular and syncretistic, relating to one of the oldest traditions known to man while remaining defiantly contemporary.