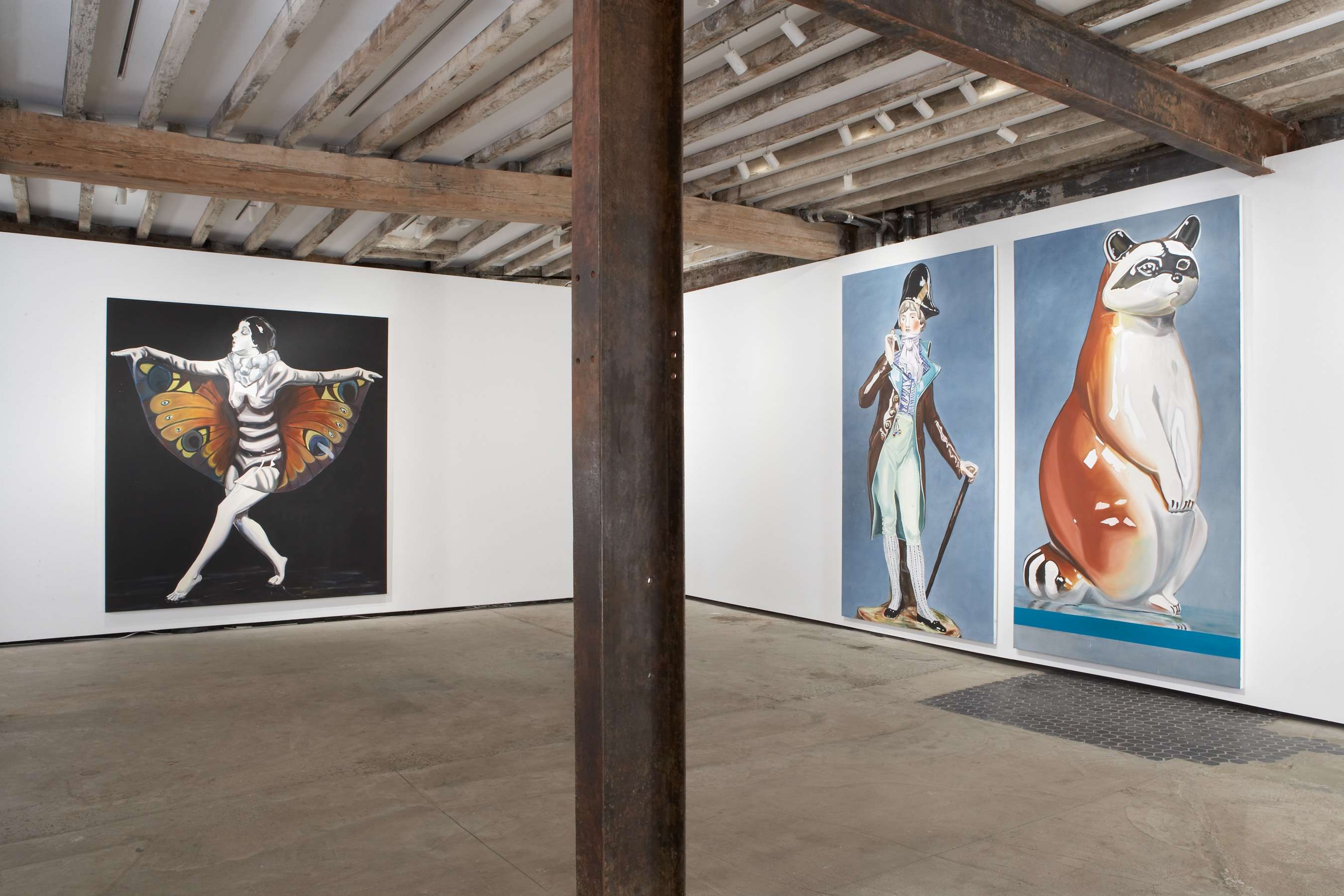 Salon 94 is pleased to present With Friends Like These, the first New York solo exhibition of Los Angeles based painter Amy Bessone. The two-part exhibition at Salon 94 and Salon 94 Freemans will be the artist's first show with the gallery.

At Salon 94 Bessone will exhibit three paintings of semi-clad women who mimic the poses of classical sculpture. At Salon 94 Freemans, each painting depicts a character from her own theatrical troupe, including Faust, a white-faced Josephine Baker stylized dancer, a dandy, a raccoon, and a eunuch.

Bessone's paintings depict small porcelain figurines blown up to monumental size against monochromatic backgrounds resembling photographic and theatrical backdrops. The figures are assigned a new layer of meaning by Bessone. Originally functioning as tchotchkes or collectibles, figurines such as these serve as religious and secular devotional objects. They are placed on mantles and in cluttered curio cabinets. They make up motley crochet. By rescaling and decontextualizing them, Bessone creates for the figures their own isolated psychic spaces. While they engage the viewer in a performative, almost animated way, they remain frozen, detached as a function of Bessone's brush. Like Picasso's saltimbanques, they appear removed from the show they are meant to perform. The original nature of these figurines as kitschy fetish objects shifts to a new, more monumental aloofness. As fetishes in the Marxist sense, they appear unattached from their origins, free-floating and deceptive. The nudes take on another role as highly desirable sexual fetish objects.

While Bessone's paintings serve as a wry comment on the fetishism and collectibility of the art object, they are not ironic paintings. They are in fact humorously democratic; the raccoon and the nude and the literary devil are all enlarged to the same scale. In a sense the paintings are psychological studies of cultural tropes. By translating diminutive, lifeless figurines into overblown portraits, Bessone evokes the pathos in the eunuch and the dancer, and the cold, hard sexuality of the nudes. The nudes share a sensibility with feminist artists such as Cindy Sherman and Laurie Simmons, who similarly question the representation and objectification of women.

The formal qualities of the works reify their fetishistic nature and isolated space. The porcelain skin of the female figures is luminous, tactile, but cold, contrasting with their seductive postures. The flatness and uniformity of the paint condense the figure and its ground, enhancing the artificiality of the scene. The paintings are rich with art historical references; the theatrical figures in space resemble Watteau's baroque performers by way of Manet's isolated, frontal portraits. The nude females hearken back to Roman sculpture with their posture and draping.