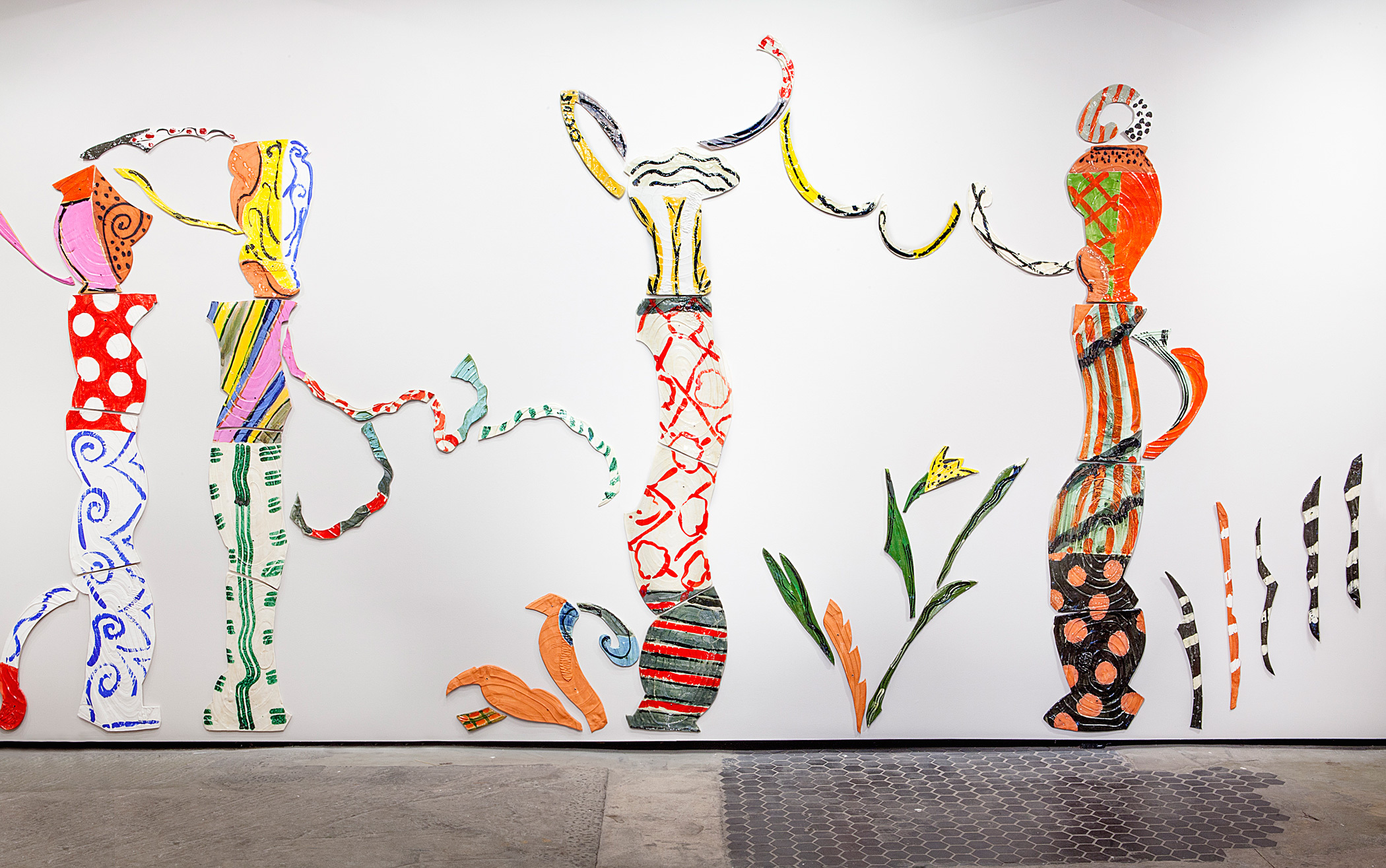 Windows, Carpets and Other Paintings

With the splashy bright color and curvaceous line she is known for, Woodman presents a theatrical vision of home, courtyard and garden. Her installation at Salon 94 Freemans divides the gallery into ideas about “inside” and “outside”. One side of a wall contains vases, figures, shells and bouquets, where the flowers too are rendered in glazed ceramic. A small, flat silhouette in the shape of a vessel is painted on one side with a nude female Venus figure, and on the other side with abstract patterns in washy colors—a careful method with a quick look inherited from Modern painting masters. This is the home’s interior, defined here as a place for the presentation and display of objects and vessels.

Woodman stages the other side of the space like a walled garden or interior courtyard with paintings on canvas and ceramic hung on the walls framed as “windows.” Paintings with ceramic lie flat on the floor like “carpets.” The domestic objects are made both lively and strange. Clay segments are taken from the left-over bits and scraps of vases, shells, and other shapes that require cut-outs in the studio. The recycled remnants are used like “ready-mades”, existing pieces found in the studio and collaged into new pieces with a raucous surface orchestration that recall the paper cut-outs of Matisse. The canvas grounds of the floor works, referencing mid-century expressionistic monochromes, are brushy, wet and bright, as the surfaces are loaded with gestures rather than figures. Recycling her own materials and laying them out as both surface decoration and structural armature, Woodman underscores her trademark vision of domestic objects that marry three-dimensional components to flat surfaces. Her wall pieces perform a similar union of painting and sculpture—the central element of the painted canvas is a plinth that juts out from the belly of the composition to support two unglazed vases, comically crude and overscaled, as if to present an ultimate form.

A large site-specific mural done in the artist’s freewheeling drawing style fills the back wall. Flat yet textured ceramic fragments represent columns topped with vases and vines, where vaulting arabesques and clashing patterns perform like lively human surrogates. The horizontal composition fills the width of the gallery and functions like a horizon line, or a view out onto the garden, as if from a window or terrace. Moments of bare ceramic and fractured line point to the sophisticated use of absence within the composition. Woodman’s pieces activate the space like a stage, stretching out beyond the picture plane and spilling onto the floor, charging every surface and negative space with the audacity and exuberance of her eccentric forms.

In another buoyant gesture, Woodman presents a new “wallpaper” work, a composition assembled from over 90 small ceramic cutaway pieces that are the recycled fragments removed from larger forms like the wings of vases and the periphery of the mural. The artist sometimes refers to these leftovers as “bones” as if they provide an essential structural framework to a body where non-ceramic wall space is a connected surface or flesh. Glazed, arranged and displayed, these fragments are then offered to the public for the taking. The individual elements will be given away on a first-come, first-serve basis to any viewers who would like to have them. The gesture reiterates the act of recycling, and also reflects a deeper archeological history of ceramics, where individual pieces—most often vases and vessels—are taken by their finders, individual parts divided amongst separate museums around the world. The performance of dispersal and the act of gifting is an enthusiastic staging of something like a ritual that engages what will eventually be a blank wall in the gallery, situated in between interior and the outside world.

This is Woodman’s third solo exhibition at Salon 94. A catalogue on the occasion of the exhibition will be published in June 2013, and will include a conversation between the artist and art critic Barry Schwabsky. Woodman's work was the subject of a major one-person retrospective at the Metropolitan Museum of Art in 2006. It is in the collections of over 50 museums worldwide. Her solo presentations include the Stedelijk Museum, Amsterdam; the Gulbenkian Museum, Lisbon; the Gardiner Museum, Toronto; Wadsworth Atheneum Museum of Art, Hartford, Connecticut; and the Musee des Arts Decoratifs, Paris among many others. Woodman has been the recipient of honorary doctorate degrees from the Rhode Island School of Design, the Nova Scotia College of Art and the University of Colorado.