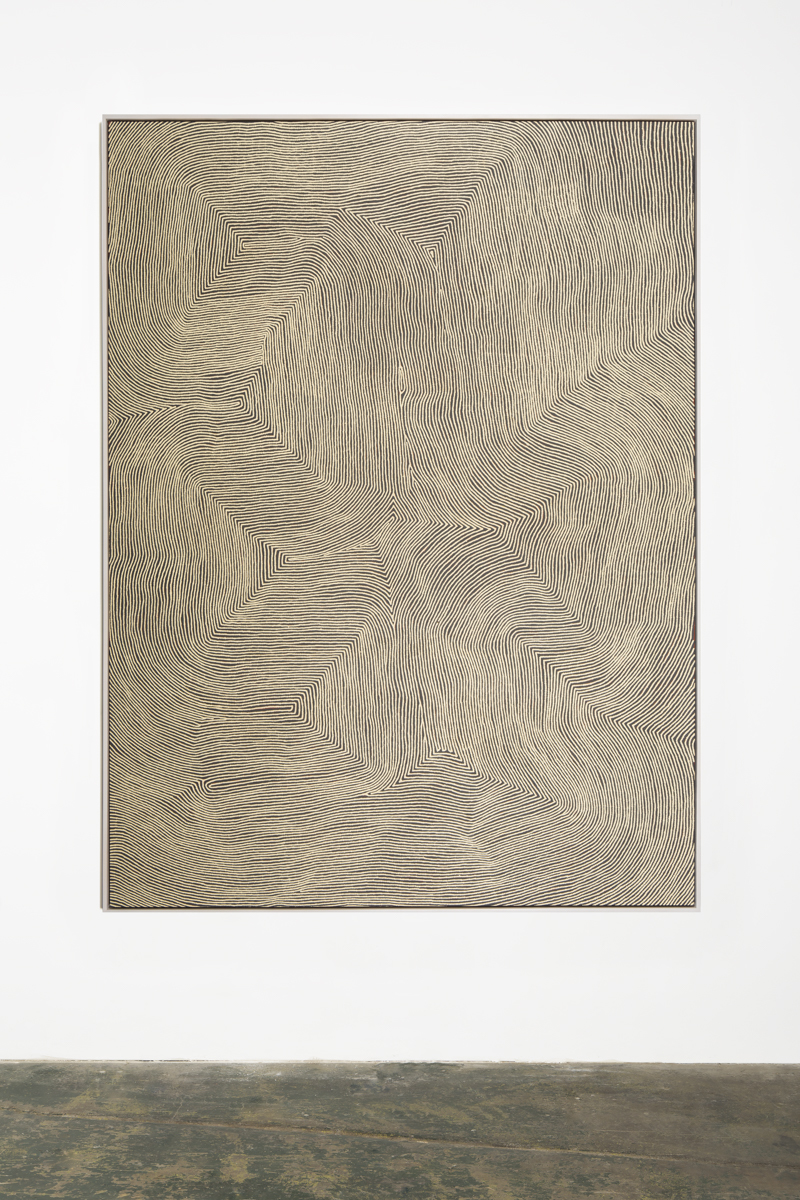 ​Salon 94 is pleased to present the first US solo exhibition of Warlimpirrnga Tjapaltjarri. Warlimpirrnga is one of Australia’s most acclaimed contemporary Aboriginal artists and a leading figure of the Aboriginal Australian painting movement.

Few painters can match the optical intensity found in his paintings. Shimmering like a mirage, they pulse and swirl, hovering between the canvas and the eye like an electromagnetic field. At times the effect is so powerful that the only human response is to turn away: to shield one’s eyes from their radiant energy. Amongst his Pintupi kin in Australia’s Western Desert, Warlimpirrnga is considered a powerful maparntjarra (ritual healer)—a claim that is easy to accept when confronted with the alchemic force of his paintings.

Born around 1958 on a hillside near the great salt lake Wilkinkarra (Lake Mackay) in Western Australia, Warlimpirrnga lived nomadically with his family until 1984, when the family was spotted in the remote desert by the artist Pinta Pinta Tjapanangka and his son Matthew Tjapangati, who were camping nearby. The discovery of a “lost tribe,” the Pintupi Nine caused a media sensation, but the family was quick to point out, they were not lost: they were living on the country of their ancestors. This was land they knew intimately, trekking daily between scarce living water, and chasing clouds to stay beneath life-giving rains.

With their “discovery,” Warlimpirrnga and his family were thrown into a new world. As the senior male of the group, Warlimpirrnga led his family into this world; drawing on all of the survival skills he had learned as a hunter-gatherer. Despite his relative youth, Warlimpirrnga’s upbringing made him a formidable repository of 40,000 year old knowledge; he quickly assumed a position of authority within the Pintupi, admired for his prodigious knowledge of healing, law and ceremony.

By 1984, painting was an established and central part of modern Pintupi life. It was over a decade since the founding of Papunya Tula Artists—the community art center that sparked an artistic renaissance in Aborginal painting. Three years after settling at the community of Kiwirrkurra, Warlimpirrnga began to paint. Under the tuition of a senior artist in the community, he produced his first painting in April 1987. His first 11 works were exhibited in Melbourne at Gallery Gabrielle Pizzi in 1988, with the entire body being acquired by the National Gallery of Victoria (in Melbourne).

Warlimpirrnga’s principle influences were the artists George Tjungurayi and Tjampu Tjapaltjarri, from whom he learned the stark, linear style synonymous with Pintupi painting at Kiwirrkurra. But Warlimpirrnga took this style to dazzling new levels of opticality. Swirling lines of dots shimmer across the canvas like a mirage, evoking the shifting movement of desert sands. The pulse and gleam of these works is a powerful visual metaphor for Tjukurrpa (Dreaming)—the ancestral power that the Pintupi believe runs through all things.

The epicenter of the power in Warlimpirrnga’s paintings comes from his great muse Wilkinkarra (Lake Mackay). Wilkinkarra is a vast glistening expanse spanning 1,350 square miles between the Gibson and Great Sandy Deserts of Western Australia. Warlimpirrnga’s depictions are usually focused on the site of Marawa—a claypan found at the Lake’s northern end. This is a site of particular significance in the journeys of the Tingari—a group of ancestral beings who travelled over vast stretched of the country during the Tjukurrpa. During these travels, they performed many rituals and created many sacred sites. The stories of the Tingari are commemorated in many important song cycles and ceremonies. As events associated with the Tingari and of a secret nature, little additional detail can be offered to outsiders when artists like Warlimpirrnga describe their work.

Traditionally, the journeys of the Tingari were recounted in the designs used on pearl shells and kurtitji (ceremonial shields)—the prized possessions of ritual healers. In Warlimpirrnga’s paintings there are echoes of these designs, but they are transformed into the artist’s own unique visual vocabulary. Warlimpirrnga mines the innate power of these designs as a way of crossing cultures, in order to imprint their power onto a new audience. In essence, Warlimpirrnga’s paintings are an attempt to harness the energy of two worlds: of the ancient knowledge of Tjukurrpa that still structures Pintupi life, and the new power of the art world into which these paintings are deliberate infiltrations.