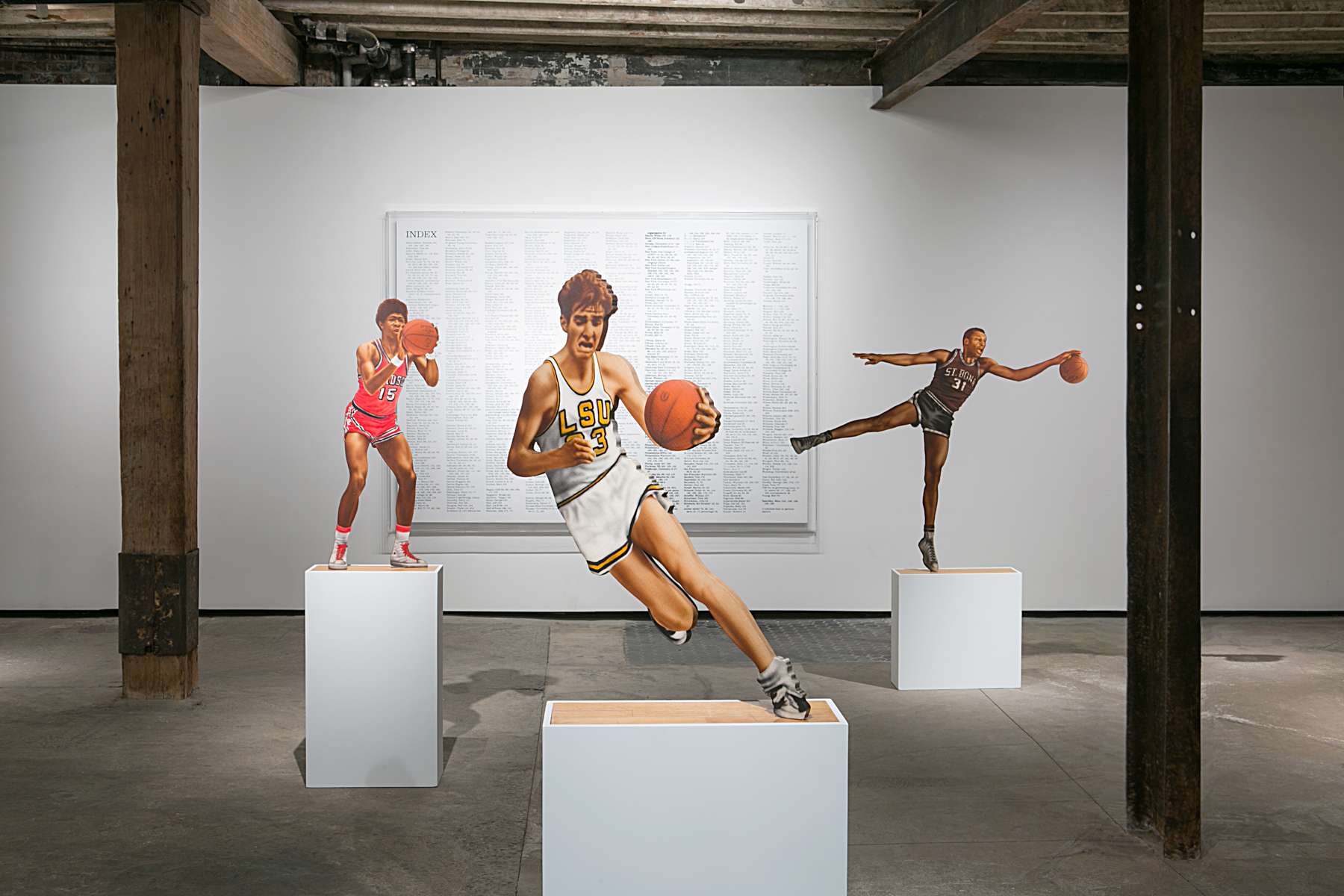 A snapshot into the parallel evolution of basketball and civil rights in America during the mid to late 1960s.

Salon 94 is pleased to present Transition Game, a group exhibition curated by Fabienne Stephan and Adam Shopkorn. The exhibition serves to provide a snapshot into the parallel evolution of basketball and civil rights in America during the mid to late 1960s.

In 1969, while America was reeling from assassinations, racial strife and an unpopular and costly war, something beautiful was happening on basketball courts across the nation. Basketball was not only becoming increasingly integrated, but also transitioning into a place where black individual expression was welcomed, even revered and imitated by one of the country’s most talented white players, 'Pistol' Pete Maravich. While the "Great White Hope" syndrome persisted in the Indiana heartland with Rick Mount, African American players like Charlie Scott of University of North Carolina and Mike Maloy of Davidson College were starring at major universities in the south and elsewhere. This shift set the stage for the coming years when black talent would dominate and create a major cultural ground shift in athletics, media and entertainment.

Kanovitz found the rhythms, fluidity and grace of basketball highly exciting. In the late winter of 1968, Sports Illustrated sent Kanovitz to seven college campuses to shoot preliminary photographs of the best players of the year in action. Then, back in his studio on New York’s Lower East Side, he arranged and rearranged the stances of each player, isolating individual styles, spirits and idiosyncrasies. Once his drawings were complete, Kanovitz laminated canvas “skins” onto lumber or special plywood boards, cut out the raw figures and meticulously painted them in acrylic. At a glance, the figures appear to be fully photographic. Even at close inspection, the painstaking brushwork is barely evident.

In addition to these works, the exhibition includes works by Richard Avedon, Lorna Simpson, and Lucien Smith that also feature the players of this time, Kanovitz’s subjects.

Avedon's portrait of Lew Alcindor (later to be known as Kareem Abdul-Jabbar) from 1963, suggests the photographer's appreciation for unmistakable bodily elegance. Grace and ease are on full display in Alcindor's pose as he effortlessly palms the basketball. He stands supremely as the consummate new world athlete. Soon after Alcindor's 1966 entry into the college game at UCLA, the NCAA voted to ban the slam dunk, the move that Alcindor had come to master. The slam dunk was not reinstated by the NCAA until 1976. As a player, he changed the rules of the game and would accelerate and continue to trigger the game's evolution.

Lorna Simpson’s Poets is an installation composed of 19 hand-altered photographs of high school basketball players from the 1950’s through the 1970’s that are paired with 19 aluminum sculptures. The Poets were and continue to be a basketball team from the Paul Laurence Dunbar High School in Baltimore, Maryland. In 1940, it was the second school in the city to graduate African American students. Simpson reprinted the found archival photographs, adding in by hand the crop marks that appeared on the original photos. The documents are paired with aluminum counterparts that reference the placement of the basketball but not the player. Emphasizing the pattern and presence of the ball alone, Simpson also underscores the pose of each player as it relates to the ball, associating posture with the construction of identity.

Lucien Smith’s Ark (Basketball) painting appropriates its indexical text from Bill Gutman’s book The Pictorial History of Basketball. The book details the origins of basketball from the collegiate to the professional game and illustrates it with black and white and color photographs. The silkscreen of the book’s index is framed behind protective Plexiglas, marking it for preservation like an “ark,” as a vessel that protects against extinction. The painting includes the names of all the players that Kanovitz depicted in the show, as well as Lew Alcindor.

Howard Kanovitz (1929 - 2009) was included in the Whitney Museum of American Art’s seminal survey of New Realist painting in 1970 alongside artists such as Robert Bechtle, Chuck Close, Richard Estes, Malcolm Morley and Philip Pearlstein. He also had a major solo exhibition at The Jewish Museum in New York in 1966. His work will be exhibited at the Museum Ludwig in Cologne in October 2014.

Richard Avedon (1923 - 2004) began work as a fashion photographer for Harper's Bazaar in 1945, eventually joining rival Vogue magazine, where he would remain on staff until 1988. In 1992 he was named the first staff photographer for The New Yorker. He is included in the collections of MoMA, the Smithsonian, and the Metropolitan Museum of Art, along with countless other museums and institutions worldwide. He is the only photographer to have had two major one man exhibitions at the Metropolitan Museum of Art, in 1978 and 2002.

Lorna Simpson (b. 1960) has participated in such important international exhibitions as the Hugo Boss Prize at the Guggenheim Museum, New York, and Documenta XI in Kassel, Germany. Her first mid-career survey was exhibited at the Los Angeles Museum of Contemporary Art, the Miami Museum of Art, the Whitney Museum of American Art, New York, the Kalamazoo Institute of Art, Michigan, and the Gibbes Museum in South Carolina. Her recent traveling European retrospective curated by Joan Simon, premiered at the The Jeu de Paume in Paris in spring 2013, traveled to the Haus der Kunst in Munich and is currently on view at the BALTIC Centre for Contemporary Art in Gateshead.

Lucien Smith (b. 1989) graduated from Cooper Union in 2011, and has since mounted solo exhibitions at OHWOW in Los Angeles, The Suzanne Geiss Company in New York, Salon 94, New York, and Bill Brady in Kansas City. He will premiere a new body of work at Skarstedt Gallery, New York in May. His work is included in the collection of the Los Angeles County Museum of Art.