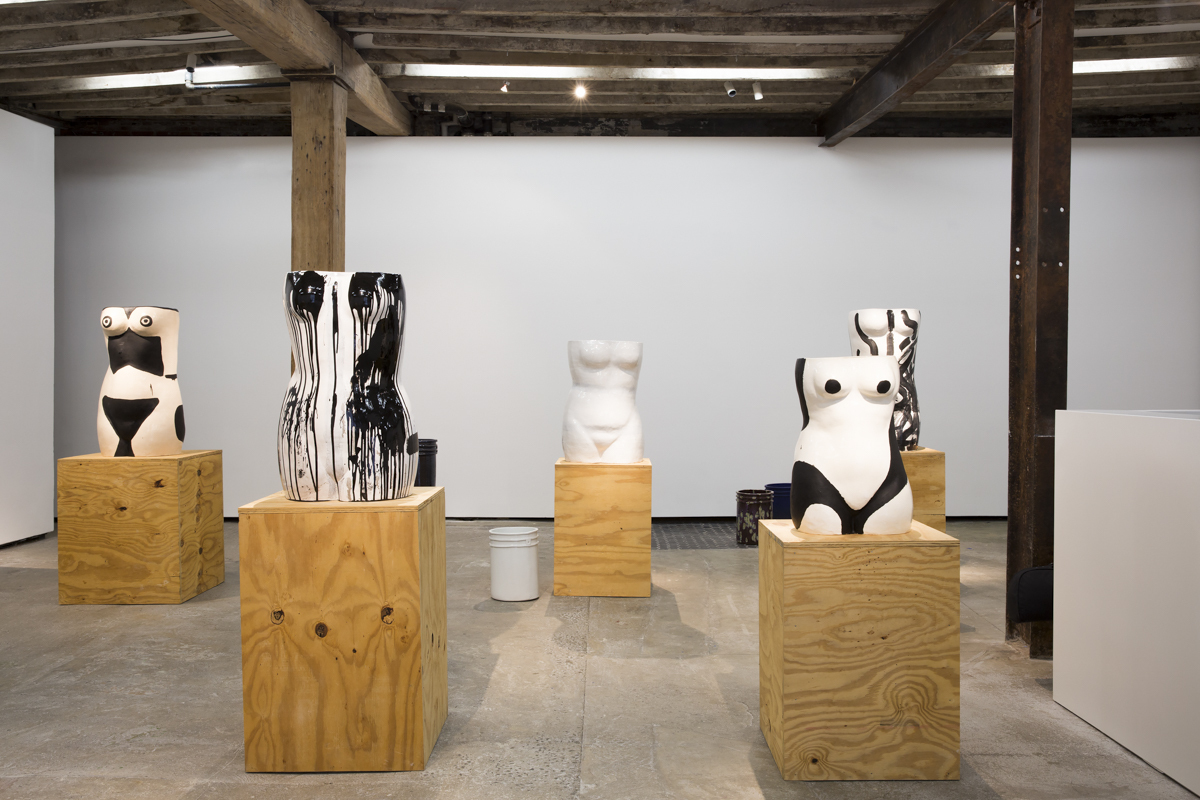 Amy Bessone and Matthias Merkel Hess present delightfully new and strangely familiar works—the Torsos by Bessone and Buckets by Merkel Hess both use the empty vessel as blank canvas for painting, and as containers that lack.

Salon 94 pairs two LA based artists, Amy Bessone and Matthias Merkel Hess this summer. Both artists present delightfully new and strangely familiar works. The Torsos by Bessone and Buckets by Merkel Hess both use the empty vessel as blank canvas for painting, and as containers that lack. Humor and play of utility and futility of a body is embedded in their work. Referring to standard types, the torsos and buckets are hand-made, imperfect and idiosyncratic constructions. Bessone’s work deals directly with the space the female body takes up, and the female body as a cultural construction. Merkel Hess deals deftly and concretely with our physical relationship to everyday utility objects.

Amy Bessone is known for her oil on canvas paintings of female forms, from abstracted outlines with mask-like faces, to figurative “portraits” of small figurines rendered larger than life, to bodies dis-assembled to flat puzzle-like pieces. Her persistent development of the female figure as fetish, construction and a site for looking has here evolved into sculptural form. Bessone’s six slightly over-scale female torsos, installed on knotted plywood vary in shape, size, and glaze. Bessone strips down her palette to variations on black and white. The Ruben-esque busts bulge imperfectly, painted graphically to highlight T&A.

The various ceramic “Bucketry” (the artist’s portmanteau of buckets plus pottery) of Matthias Merkel Hess – including buckets, trash cans, milk crates, gas cans, oil jugs, squatty pottys and more — is an homage to a history of labor. The plastic vessels turned sculptural objects can now be used for flowers instead of for paint or building materials. In changing their use-value he looks to the space inside. The modest utilitarian bucket is both Pop object and readymade. “Potters make pots and artists make art,” writes Leah Ollman, “if you cling to party-line thinking, which Merkel Hess does not. He messes with boundaries and adopts multiple causes. Utility and futility appeal to him equally and at the same time.”

Bessone (b. 1970, New York) completed her studies at De Ateliers, The Netherlands in 1995 and since then has mounted numerous exhibitions including solo shows at Veneklasen Werner, Berlin (2012), Praz-Delavallade, Paris (2011), David Kordansky Gallery (2010), among others. Her work is included in the collections of the Museum of Contemporary Art, Los Angeles, Frac Bretagne, Chateaugiron, France, The Saatchi Collection, London, UK, Rennie Collection, Vancouver, Canada, and the Rubell Family Collection, Miami. She has had two solo exhibitions at Salon 94, and is slated for an upcoming solo show at Gavlak Gallery, Los Angeles next year.

Merkel Hess (b. 1978, Cedar Rapids) received his MFA from UCLA in 2010. Since then his work has been exhibited at Salon 94, New York, ACME, Los Angeles, Volume Gallery, Chicago, the Nerman Museum of Contemporary Art, Kansas City, White Columns, New York and Pacific Design Center, Los Angeles, among many others. His work is included in the collections of Cedar Rapids Museum of Art, Cedar Rapids, IA, Hallmark Art Collection, Kansas City, MO, the Museum of Fine Arts, Houston, Houston, TX, and the Nerman Museum of Contemporary Art, Overland Park, KS. The artist recently relocated from Los Angeles to New York City.