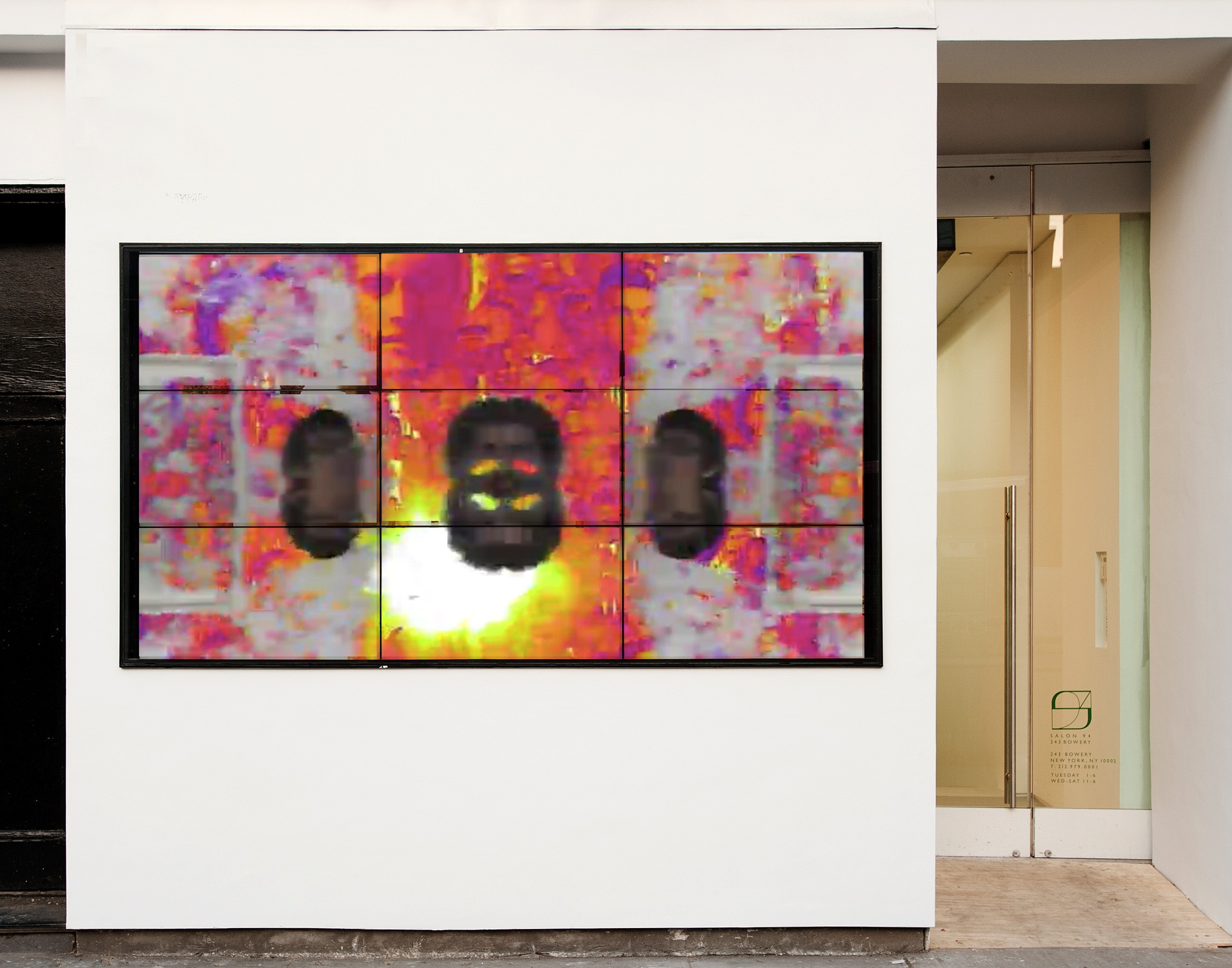 Salon 94 Bowery is pleased to present Jon Kessler's The Blue Period (2007/2011), an immersive installation featuring kinetic machines, surveillance cameras, video monitors and life-size cardboard figures. This video-drenched panopticon is the culmination of Kessler's longtime interest in surveillance, alienation and spectacle. First shown in Berlin in 2007, this is the work's first installation in the US.

The Blue Period is a spiritual descendant of Society as Spectacle, Guy Debord's seminal 1967 critique of the ascendant consumer culture, and the general passivity and isolation it engenders. Riffing on Debord and his fellow Situationists, Kessler has constructed a controlled environment in which social relations are mediated through images of a fabricated, inaccessible reality. Cameras capture real and fake spectators in a maze of monitors against blue splattered walls creating a fleeting sense of community and interconnection. Processors displace this blue with wave after wave of smiling catalog faces, setting the viewer adrift in a sea of the real and the imagined: a constant feedback loop that has a paradoxically liberating effect. This feeling is fleeting as the viewer becomes trapped in the immense accumulation of images, locked in an endless cycle of passivity and voyeurism.

At the installation's center an inverted mode - a gallery within a gallery - is surveyed with a miniature camera. Large collaged portraits from Kessler's residency at Dieu Donne hang on the walls, supporting Kessler's idea of the portrait as a metaphor for captivity. A bank of box monitors imprisons familiar actors in blue-face such as Jean-Luc Godard's Pierrot le Fou, Mel Gibson's Apocalypto and sequences from the Blue Man Group. Like the viewer, these characters unwittingly become part of the work, and the act of looking and being seen becomes the de facto subject. The upstairs gallery exhibits four recent small-scale sculptures, each featuring a different human organ and its prosthesis: Hands (2012), Ear (2012), Foot (2012), and Eye (2012).

Jon Kessler was born in 1957 in Yonkers, New York and lives in New York City. He received a BFA from SUNY Purchase and attended the Whitney Museum Independent Study Program. He has had numerous solo exhibitions worldwide including MoMA PS1, New York; the Carnegie Museum of Art, Pittsburgh; the Phoenix Kulturstiftung/Sammlung Falckenberg, Hamburg, Germany; the Louisiana Museum of Moderne Kunst, Copenhagen, Denmark, and most recently, the Fisher Landau Center for Art, New York. In 2011, he collaborated with artist Mika Rottenberg on SEVEN, a performance and installation work for Performa 11 and is currently working on a large-scale multi-media commission for the Metamatic Research Institute in the Netherlands. Since 1994, Kessler has been an influential studio art professor at Columbia University's Scool of Visual Arts, and plays guitar with the X-Patsys, a band he formed with actress Barbara Sukowa and artist Robert Longo.