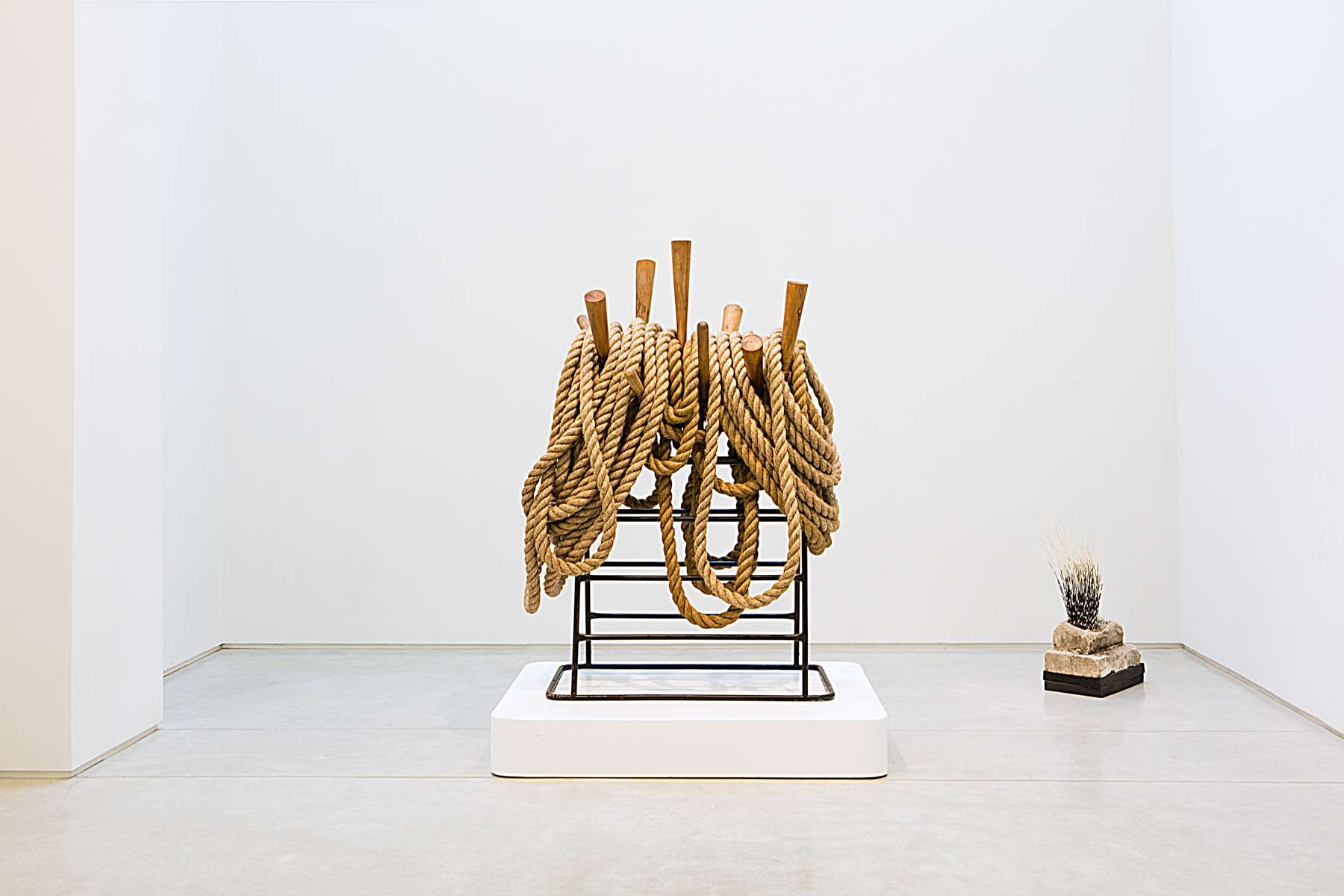 A recital that treats the legacies of George Washington Carver (1864-1943) and Yves Klein (1928-1962), focusing on unfamiliar aspects of both men—revealing surprising similarities, intersections and common denominators.

Salon 94 is delighted to present the work of Terry Adkins in both of the gallery’s downtown locations. Adkins is an interdisciplinary artist and musician known for engaging with historical narratives, often reinventing and reintroducing biographies through installation based experiences called ”recitals”. His approach to art making is similar to that of a composer, and his installations are conceived as scores that punctuate and demarcate space, creating interplay among pieces in different media.

For his first New York gallery solo show in ten years, Adkins presents Nenuphar, a recital that treats the legacies of George Washington Carver (1864-1943) and Yves Klein (1928-1962), focusing on unfamiliar aspects of both men. On the surface, the biographies of Carver and Klein could hardly be more different. Born a slave, American educator Carver rose to such prominence as one of the world’s most revered agricultural chemists and inventors that it has tended to overshadow his artistic advances. He was an award winning painter, musician and creator of numerous pigments, dyes and paints that were extracted from minerals in the soil of Tuskgegee, Alabama. Notable among them is the 1935 Dr. Carver’s Egyptian Blue 9th Oxidation, which matches an ancient hue found only on certain artifacts from the tomb of Tutankhamen and approximates the color and pigment saturation levels of International Klein Blue (IKB). French Nouveau Realist Yves Klein is famous for his color experiments, monochromes, fire paintings, body works, performances and revolutionary ideas and essays. Nonetheless, his early influences from Eastern philosophical and religious doctrines, Japanese culture and Rosicrucian esoterism - traditions that form the foundation of his visionary project - are often downplayed or even denied in an effort to tout his impervious originality. Many of Klein’s innovative concepts can be directly traced to his study of The Rosicrucian Cosmo-Conception by Max Heindel and Klein’s own Les Fondements du Judo (The Foundations of Judo) 1954, which bears witness to the depth of his involvement with the Japanese belief systems on body and space.

In Nenuphar, Adkins has drawn out and illuminated these lesser-known Carver/Klein particulars, revealing surprising similarities, intersections and common denominators. These include references to botany, agriculture, nautica, religion, music and ancient Egypt that are materially filtered through the sieve of the four elements (earth, fire, air, water). In his sculpture, video and photography Adkins transforms and repurposes a range of found materials, archival imagery and reclaimed actions in a process that he calls “potential disclosure”. The artist aims to reveal the dormant life in inanimate objects, historical facts and figures of thought with the ultimate goal of rendering the material immaterial. For example, in Harvest, irregular spheres of mirrored glass have been hand-blown through the wire teeth of an apple picker—a found farm tool used as a readymade. The gesture of breath into the mouth of the harvesting device instills the rugged tool with handmade minimalist sculpture, and suggests a re-invention of the tool as a collector of “air” and the immaterial. The sculpture also marries Klein’s interests in the Void, the monochrome, minimalism and performance, alongside Carver’s research and promotion of alternative crops to enrich the soil and as a way for farmers to improve their quality of life outside the monoculture of cotton. Modeled after illusory nature of Klein’s 1954 first public gesture Peintures, the folio Progressive Nature Studies reimagines Carver as the creator of a series of large monochrome paintings originating from infinitesimal realm of organic phenomena that he observed through the lens of his microscope. The video wall houses Glorioso, a dual screen 3D projection of wreaths, crosses and floral arrangements that personify Carver, Klein and acts of membership and memorialization.

The raw and abstract sculptures incorporate found and fabricated materials in idiosyncratic ways. Adkins is attracted to articles that are often weighty and weathered—this includes utilitarian and industrial items like leather straps and shipping ropes; historically evocative commodities like textiles and the farm tools, customized musical instruments and equipment that hold the dynamic potential for sound and rhythm. He employs reinvented narratives such as the Carver/Klein story as a way to intensify the original functions of his materials, as well as to disguise them entirely. Engaging in the history of readymade from Marcel Duchamp to assemblage, Arte Povera and abject art, his works suggest that reclaimed materials should be recreated. Texture, contrast, tension, color and surface are all part of his theatrical considerations. In the past, Adkins’ recitals have paid homage to the legacies of a number of immortal and enigmatic figures such as Bessie Smith, W.E.B. Du Bois, John Brown, Matthew Henson, John Coltrane, Jimi Hendrix, Zora Neale Hurston, Ralph Ellison, Ludwig van Beethoven, Jean Toomer, and Sojourner Truth, among others. Adkins’ immersive research not only intends to resuscitate his chosen subjects from historical erasure, but also to shed light on willfully neglected or lesser-known aspects of their biographies.

For decades Adkins has been known for his modified instruments, including immense eighteen-foot tall horns called Akrhaphones-installed as sculpture and activated in front of an audience through performance. Born in 1953, Adkins grew up deeply invested in visual art, music and language. He emerged in the mid-80’s in his native Washington D.C., where he began making installations and reconstructing instruments to accompany his simultaneous practice as a musician. Playing woodwinds, contrabass, and electronics, Adkins started out as a charter member of Harmolodica with fellow saxophonist Yahya Abdul-Majid, played in Don Cherry’s Community Orchestra, and collaborated with performance artist Sherman Fleming’s AFRO (Anti Formalist Reclamation Organization). During a yearlong residency in Zurich in 1986, Adkins and his cohort Blanche Bruce founded The Lone Wolf Recital Corps, a multimedia performance collaborative of rotating members that continues to stage emblematic concert performances. Activating his sculptures with sound, Adkins engages and re- enacts the revised stories he assigns to history.

This is the artist’s first exhibition at Salon 94. Adkins has exhibited his work widely since his first show in 1980 in Washington, D.C. His work is included in the public collections of The Hirshhorn Museum and Sculpture Garden, Washington D.C., The High Museum of Art, Atlanta, Studio Museum in Harlem, The Metropolitan Museum of Art, New York, and The Museum of Modern Art, New York. Most recently, Adkins’ work Muffled Drums (Darkwater) was acquired by the Tate Modern, made possible by the Outset/Frieze Art Fair Fund. In the spring of 2014 Prestel will publish Recital, Adkins’s first career-spanning volume surveying three decades of his multimedia installations and performances with contributions from Anthony Elms, Okwui Enwezor, Cheryl Finley, Charles Gaines and George E. Lewis.