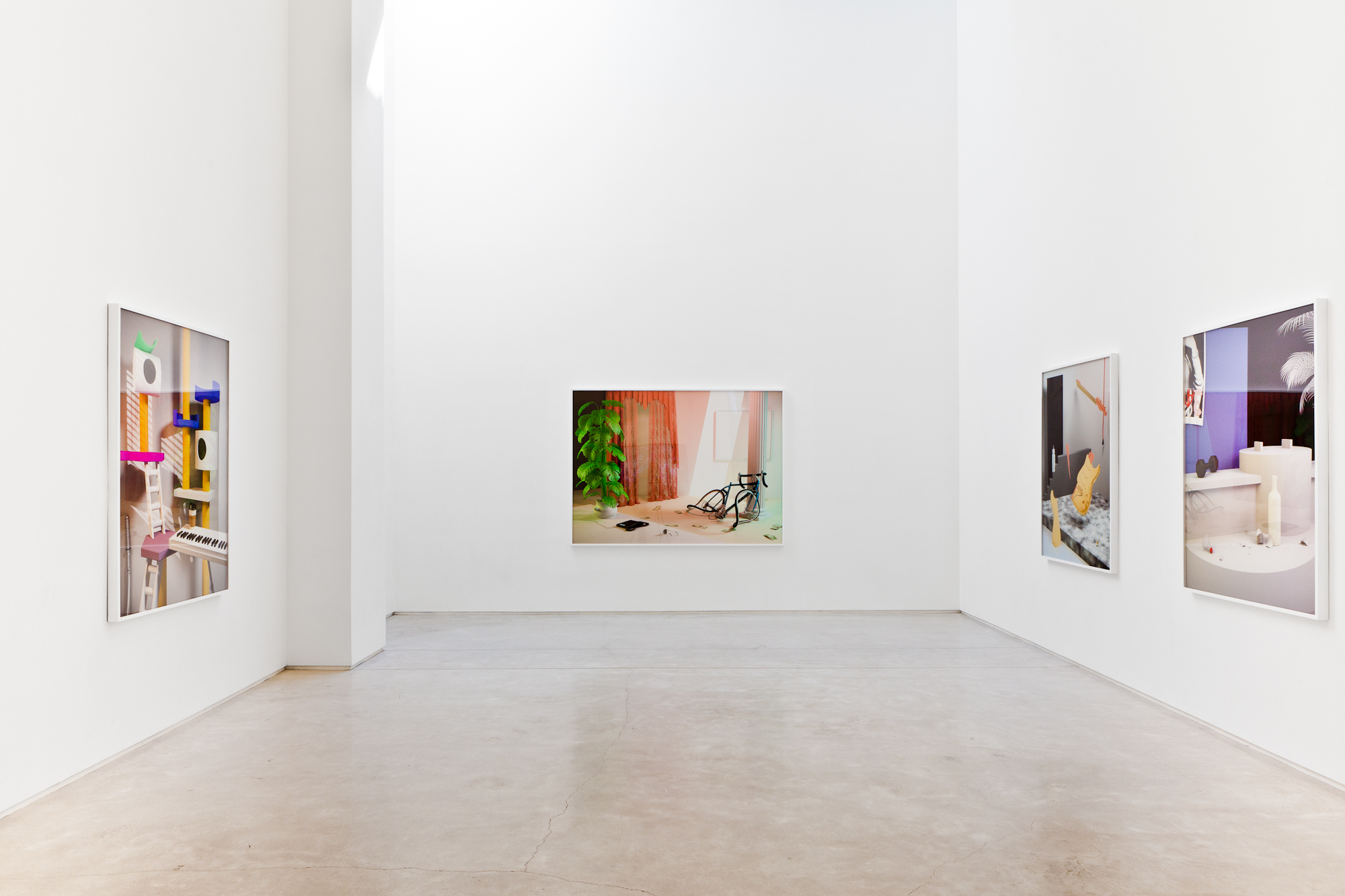 Famous for his pioneering “data mosh” and abstract videos, whose style reverberated on MTV and the net for the past decade, Murata's new work uses his trademark application of homemade technology. Beyond a tech whiz fan base, Murata engages the art history buff with a constructed world of hyper real interiors and still lives.

His images display the technological innovations that invade our 21st century lives: sports drinks, antidepressants, Apple products, brand- name snacks, and exercise equipment. The objects have either been immaculately sculpted through computer programs or purchased as ready-mades from 3D web malls. Without access to a Hollywood animation studio, Murata relies on a shared knowledge from the online community including YouTube tutorials. Using the Open Source model of production, Murata creates digital pictorial spaces hovering between waking life and the dream world, i.e. conceptual photography and surrealism. The product of Murata’s trademark DIY high tech vocabulary, these contemporary still lives conjure at once Pixar’s Toy Story, Salvador Dali’s The Persistence of Memory, and the online 3D game Phosphor Beta 2.

By juxtaposing the high-end digital fidelity of Hollywood and video gaming industries with found underground methods, Murata’s “folk” versions appear as the leftovers of everyday life - the crumbs left behind. His process is an amateur’s personal immersion and examination of the “new normal” - a cinematic and brutal HD.

In Bullseye, a blue screen is the backdrop for a disparate collection of objects: stacked pills, empty pill bottles, blue dice and a failed game of darts. The product placement here points to the allure of hyper-reality, signaling how synthetic images invade our visual surroundings. Each work shows a “party” scene - but it is unclear what has been played out; a knocked over chessboard, scattered dollar bills, a half empty glass of wine. Elements of badminton, weights and darts hint to the leisure games we play and gamble (accentuating the origin and purpose of the graphics). And more, the objects point to the artist’s personal vocabulary – baby bottles, musical culture and 80s vintage movie posters.

In Murata’s new video, a collaboration with Billy Grant, he remains on the same playing field as his still images, looking for the perfect place between randomness and intentionality. Computer generated scans are utilized to recreate his every day environment in high tech 3D. The video starts in his studio, where his computer, desk and chair are “haunted” - dissolving and reforming in a myriad of mirrored shapes, going from recognizable to abstract to obliterated. The scans blend with Murata’s own computer rendered fragments, further emphasizing the high and low, real and unreal. The result can be seen as an homage to both Walt Disney’s The Sorcerer’s Apprentice and Bruce Nauman’s Mapping the Studio.

Takeshi Murata (born 1974 in Chicago, lives and works in Saugerties, NY) graduated from the Rhode Island School of Design in 1997 with a B.F.A. in Film/Video/Animation. Murata has exhibited at The Museum of Modern Art, New York; Tate Modern, London; The New Museum, New York; Museum of Contemporary Art, Los Angeles; Museum of Fine Arts, Houston, Texas; Taka Ishii Gallery, Tokyo, Japan; New York; Bergen Kunsthall, Norway; and Ratio 3, San Francisco. In 2007 he had a solo exhibition, Black Box: Takeshi Murata, at the Hirshhorn Museum and Sculpture Garden in Washington, D.C. In 2013, his work will be included in a survey exhibition of New York artists curated by Alex Gartenfeld and Norman Rosenthal, at the Palazzo delle Esposizioni Rome.