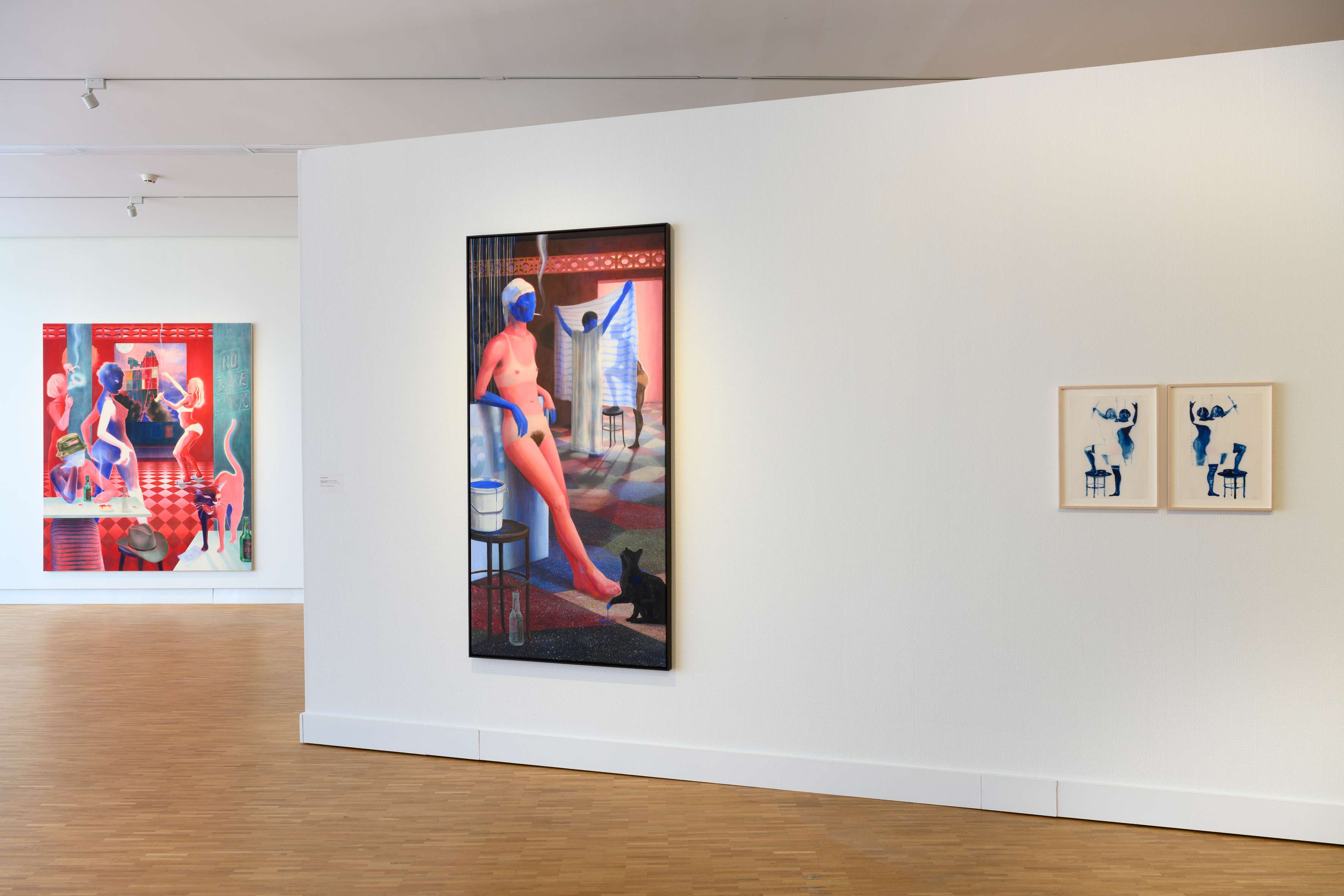 “As a figurative painter it is significant that historical figuration seems invariably created by white men for an audience of predominantly white men.” - Lisa Brice

KM21 proudly presents her first museum exhibition in the Netherlands. Lisa Brice (b. 1968, Cape Town), who divides her time between London and Trinidad, paints and draws women, often naked and absorbed in everyday activities – lingering in front of the mirror, perhaps, or casually smoking a cigarette. Depicting them with sketchy faces and sometimes striking blue skin, Brice deliberately obfuscates their identity.

Lisa Brice’s paintings and works on paper unfold like scenes from a film. We encounter mostly naked women at apparently unremarkable moments, empty and unscripted. These women appear to be between takes, staring into space, lingering in front of the mirror, in conversation, a cigarette in hand.

The women’s poses often refer to compositions by famous 19th century artists like Édouard Manet, Felix Vallotton and Pablo Picasso. Brice pendulates between object and subject. While women were for centuries depicted as passive figures by and for the male gaze - something also pulled into question by said painters - Brice shifts the perspective even further in her work, no longer serving the viewer’s gaze, but rather directing it: from casual voyeur to uninvited guest. There’s nothing to see here.

Brice’s recent work features women painting. Interested in the way in which female artists represent themselves, the self-portrait is an important theme in the exhibition. A number of new pieces in Smoke and Mirrors refer to female painters of the past, to whom she relates both as a woman and as a painter. They were the ones who paved the way. Brice includes herself, too, in her studio in Trinidad. She juxtaposes the female self-portrait with the art historical tradition of the female nude, as a way of reclaiming control of one’s own image.

The striking blue in Brice’s work emphasises the shapeshifting motif. It not only symbolises the transition from day to night (the ‘blue hour’), it also refers to the Blue Devil, a Trinidadian character who announces the start of carnival during a nocturnal ritual. Elaborating on the layered constructions of artists like Manet and Vallotton, mirrors, doors, stolen glimpses and curtains prevent any straightforward reading of the image. Brice’s work lingers in the space between what is, and what appears to be.

Lisa Brice studied at the Michaelis School of Fine Art in Cape Town. In 1998, after a residency at Gasworks, she settled in London, where she still lives and works. Over the past 20 years she has spent extended periods working in Trinidad, following a workshop in Grande Riviere in 1998, and a residency in Port of Spain the following year with artists Peter Doig, Chris Ofili and Andy Miller. During this time, friendships and working relationships were formed with Trinidadian artists such as Adele Todd, Che Lovelace and Emheyo Bahabba aka Embah (1937- 2015), who was particularly influential. Her work has recently been shown at Making and Unmaking curated by Duro Olowu at Camden Art Centre in London (2016), Salon 94 in New York (2017), Stephen Friedman Gallery in London (2017 and 2019), Tate Britain in London (2018) and Hepworth Wakefield (2020).