Salon 94 Presents Elizabeth Neel: In the Belly of the… | Salon 94 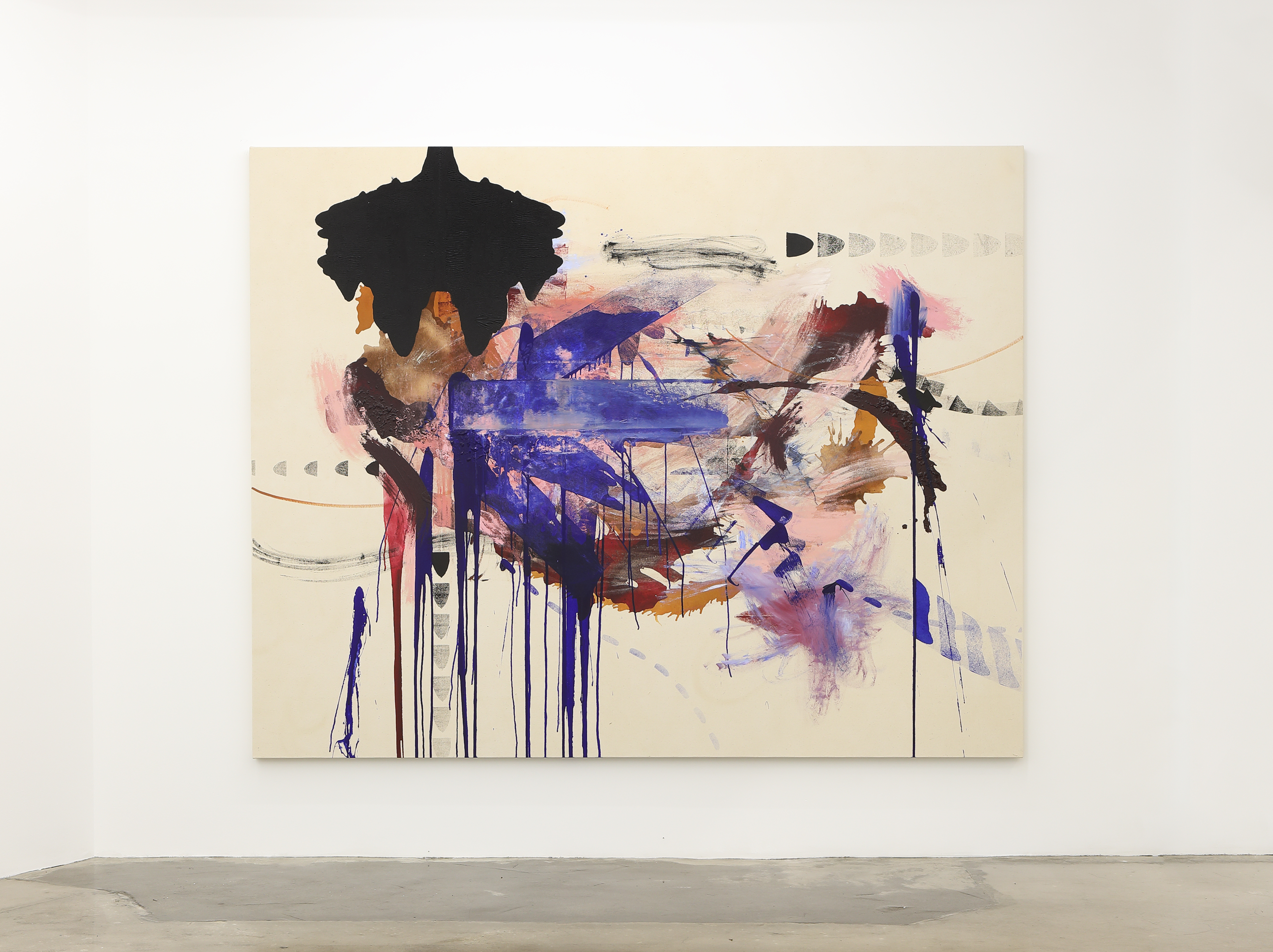 American painter Elizabeth Neel’s latest exhibition, In the Belly of the Whale, is a hypnotic gateway into the beguiling pull of abstraction and a bow to Sansu painting. Neel’s inaugural solo show in Asia, and Salon 94’s first collaborative show with Various Small Fires, bursts with unexpected hues and notations from nature–showcasing 4 grand landscapes, alongside 8 smaller paintings on paper.

An intensely physical painter, Neel’s mysterious shapes, symbols and strokes in acrylic are poured, brushed, printed, folded, stamped, rolled and dragged onto raw canvas, only to be stretched after completion. As if tilling, harrowing, and leveling a field, it is not surprising that these paintings, made over the long Covid months, were wrought in a barn on her family’s farm in Morristown, Vermont.

In traditional East Asian Art and Sansu painting, landscapes are a treasured subject, representing both nature itself and how we view it. Here Neel honors these principles, depicting her surroundings in color, negative space, composition and marks.

Neel’s red is the particular mix of blood and mud that soaks a newly born calf, or the rusty clay seeping through her toes after a summer pour. A heroic and joyful painting, Captivity shows off a bouquet of burgundy and crimson reds, hot pinks and dusty roses, and, as if left alone in the barn at night, small animals seem to have left their trace, as their imagined footprints march across the canvas muddying and swirling together the wet paint. And, as if a sudden change of season- speckles of white paint pepper Captivity, like a dusting of snow.

The granddaughter of iconic American portrait painter Alice Neel, and sister of filmmaker Andrew Neel, Neel has honed a painting practice that consistently draws from everything around her. She works both in rural Morristown, and urban Brooklyn. Her city studio is covered in an abundance of images culled from the internet – exotic flora, animal X-Rays, medieval mosaics, human anatomy diagrams, gothic architecture, and more. Her painting titles Chewing Air and Field Guide further embed quirky and subtle inspirations gleaned from sources from field manuals, contemporary science fiction novels, and Jazz music.

The show’s title In The Belly of the Whale references the Jonah myth (in the Hebrew Bible, Christian Bible and Koran) in which a man (Jonah), reluctant to serve his master (God), is consumed and imprisoned by a giant sea creature. Neel’s interest in this story stems from the visual, tactile metaphor of a body trapped within a body; a mind trapped within a mind. This layered and doubled state of suspension is part of what Neel describes as a “transcultural human attraction to transformation myths”. Peeling the layers of myth, Neel’s paintings, embedded with nature’s clues to the hidden language of abstraction, encourage us to move around its choreography.

An intimate presentation at Various Small Fires, we are welcomed to meditate, and to absorb the texture, color and mark making that dance across each work. Yesterday’s red is the color of pain, today the color of a cut persimmon, tomorrow the color of love and liberation.

Elizabeth Neel received a Bachelor of Arts from Brown University, Providence, in 1997; A Diploma from the School of Museum of Fine Arts, Boston, in 2002; and a Master of Fine Arts from Columbia University, New York, in 2007. Neel has had solo and group shows at galleries and museums around the world, including the Sculpture Center, Long Island City; Neuberger Museum of Art, Purchase; Saatchi Gallery, London, Mary Boone, New York, Suzanne Vielmetter, Los Angeles, and was included in the Prague Biennial 5. Neel is represented by Salon 94, New York who debuting In the Belly of the Whale at Various Small Fires, Seoul, South Korea until October 24, 2020.