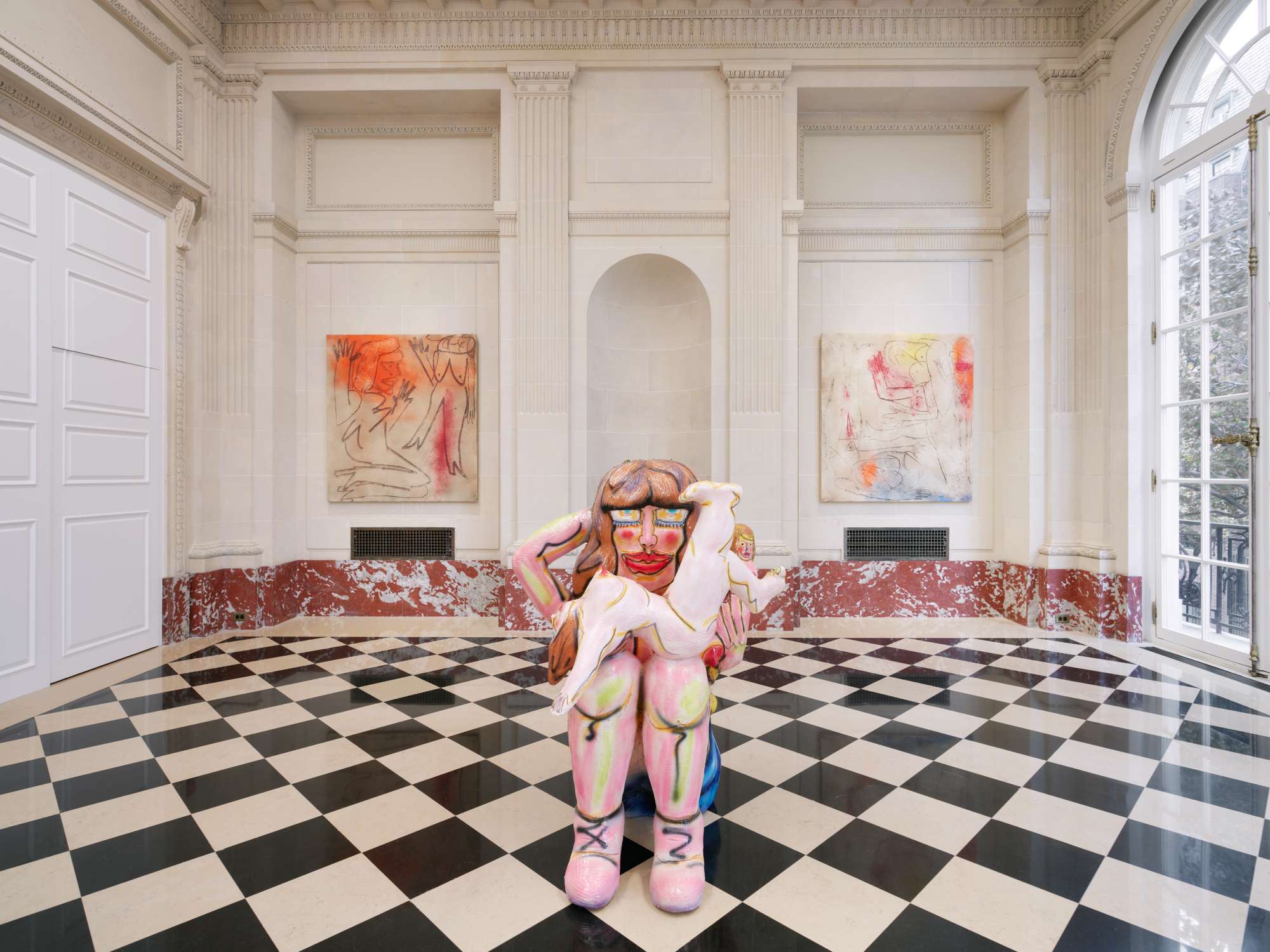 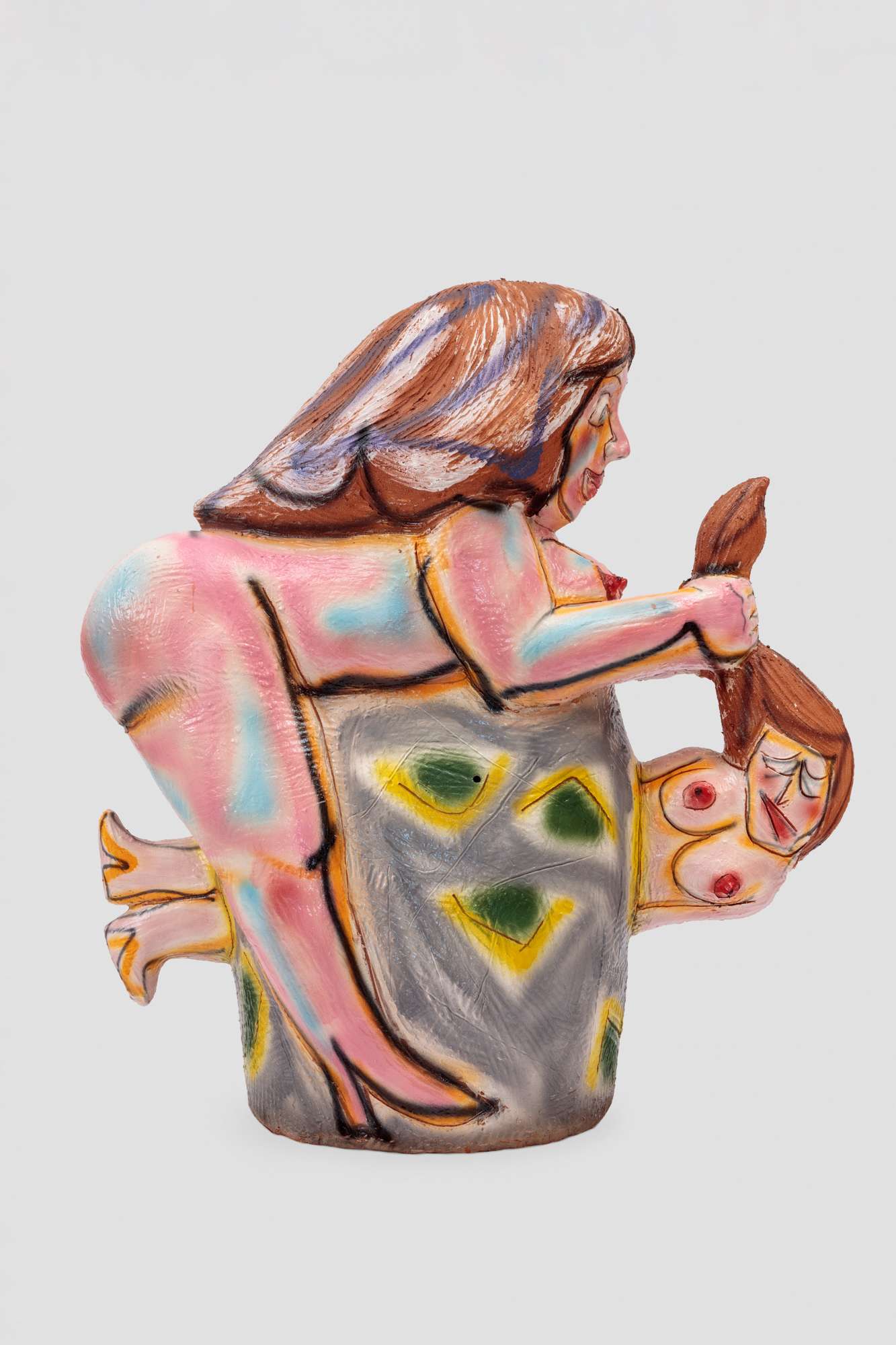 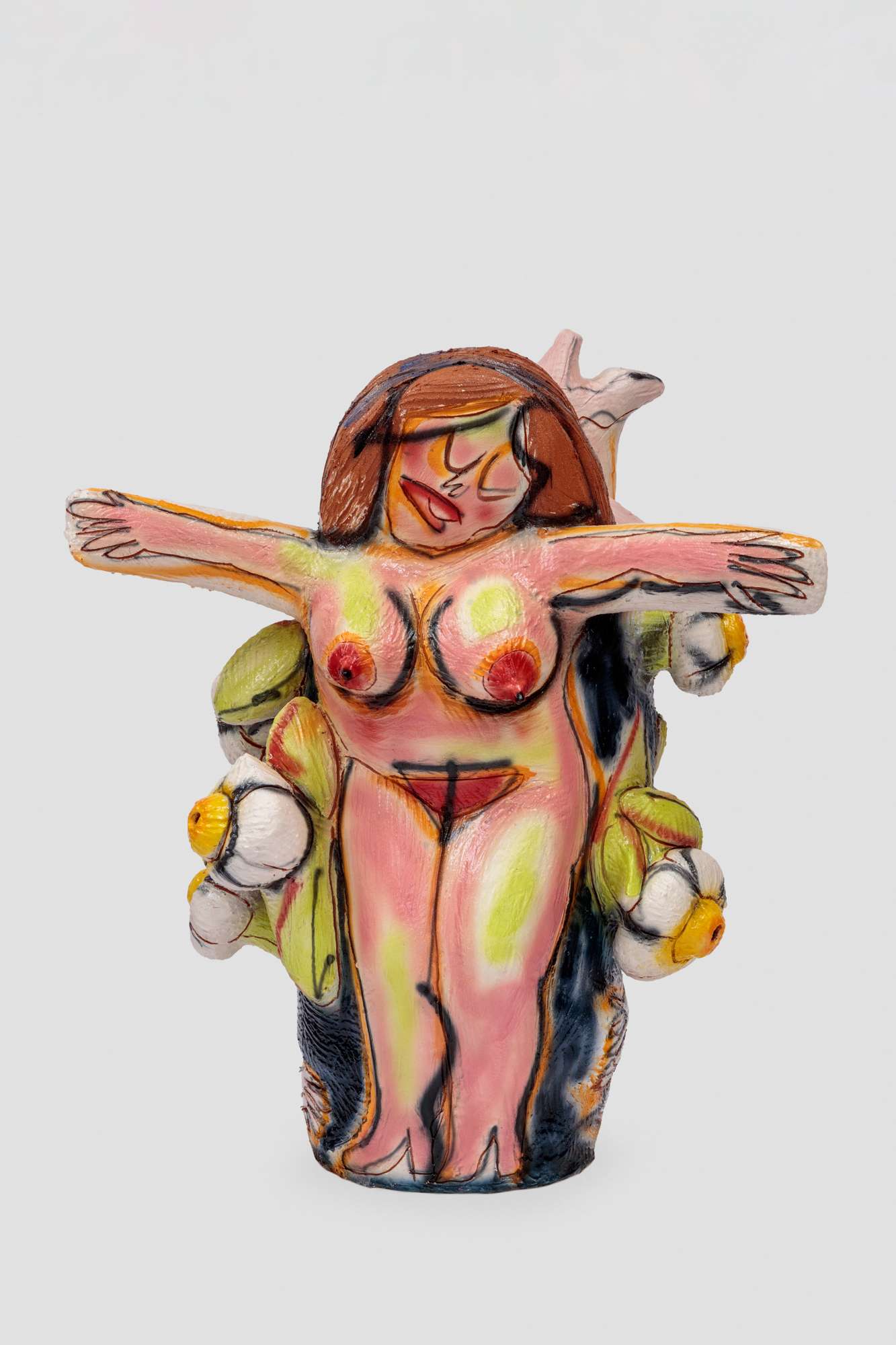 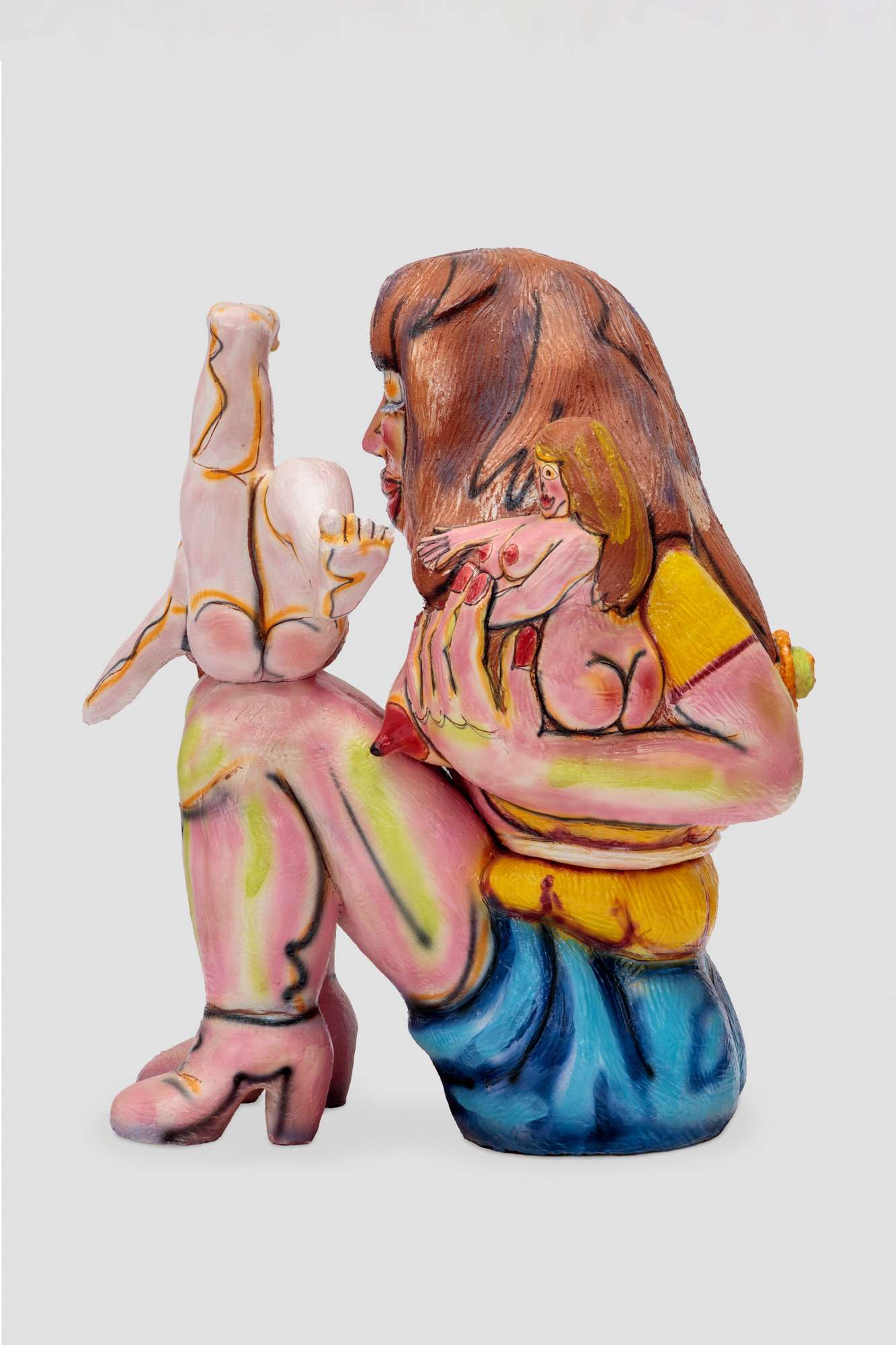 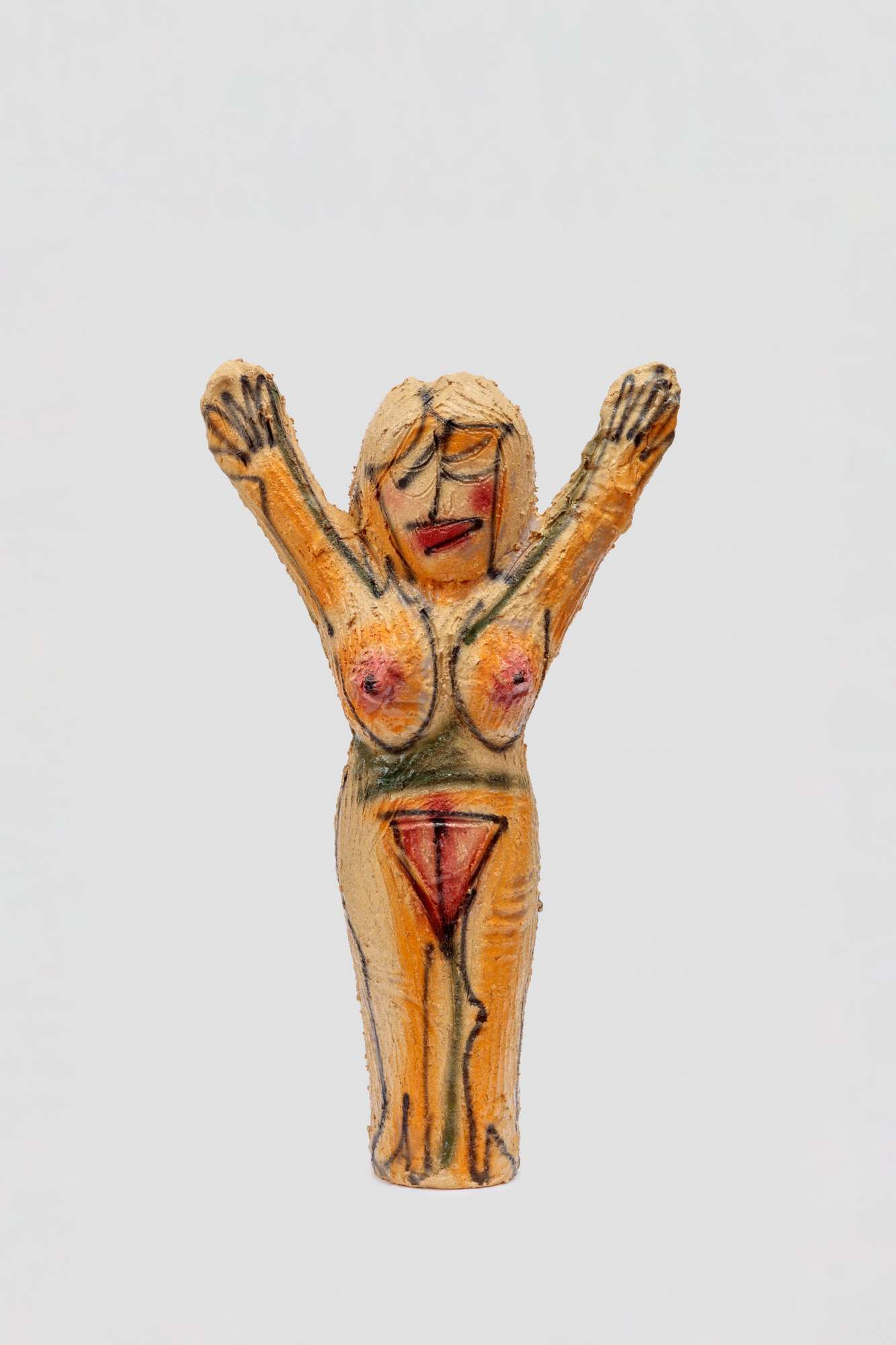 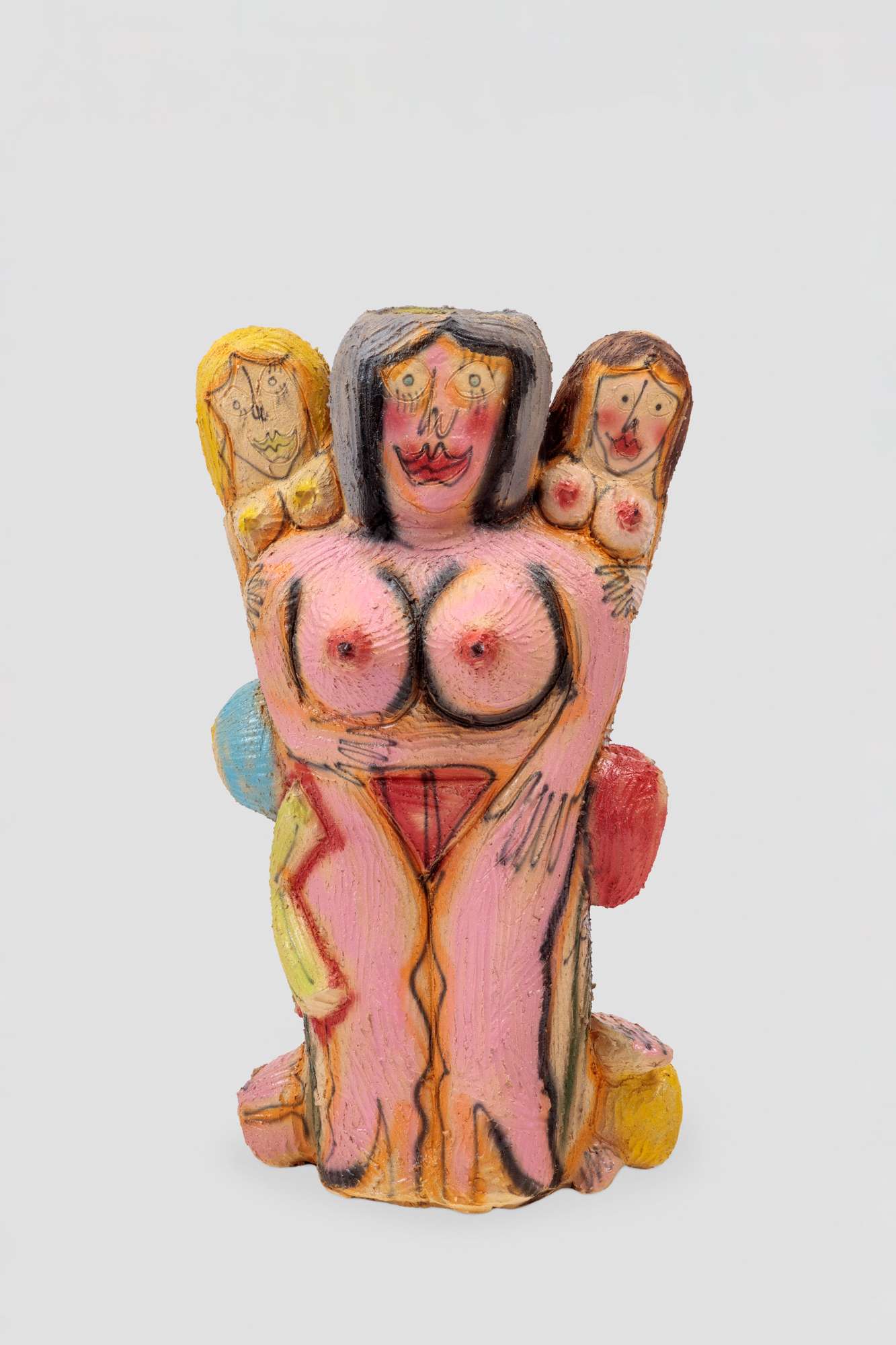 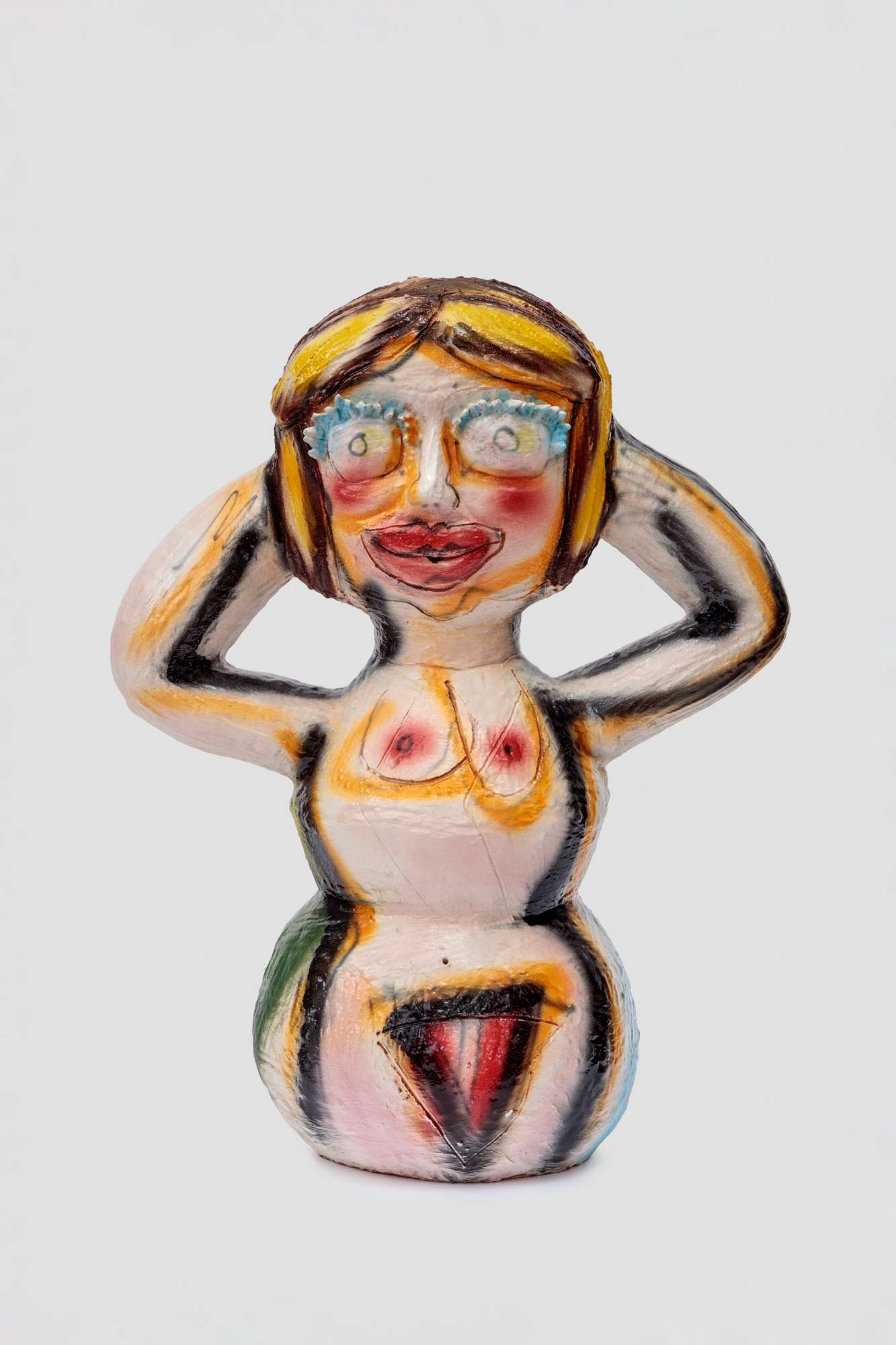 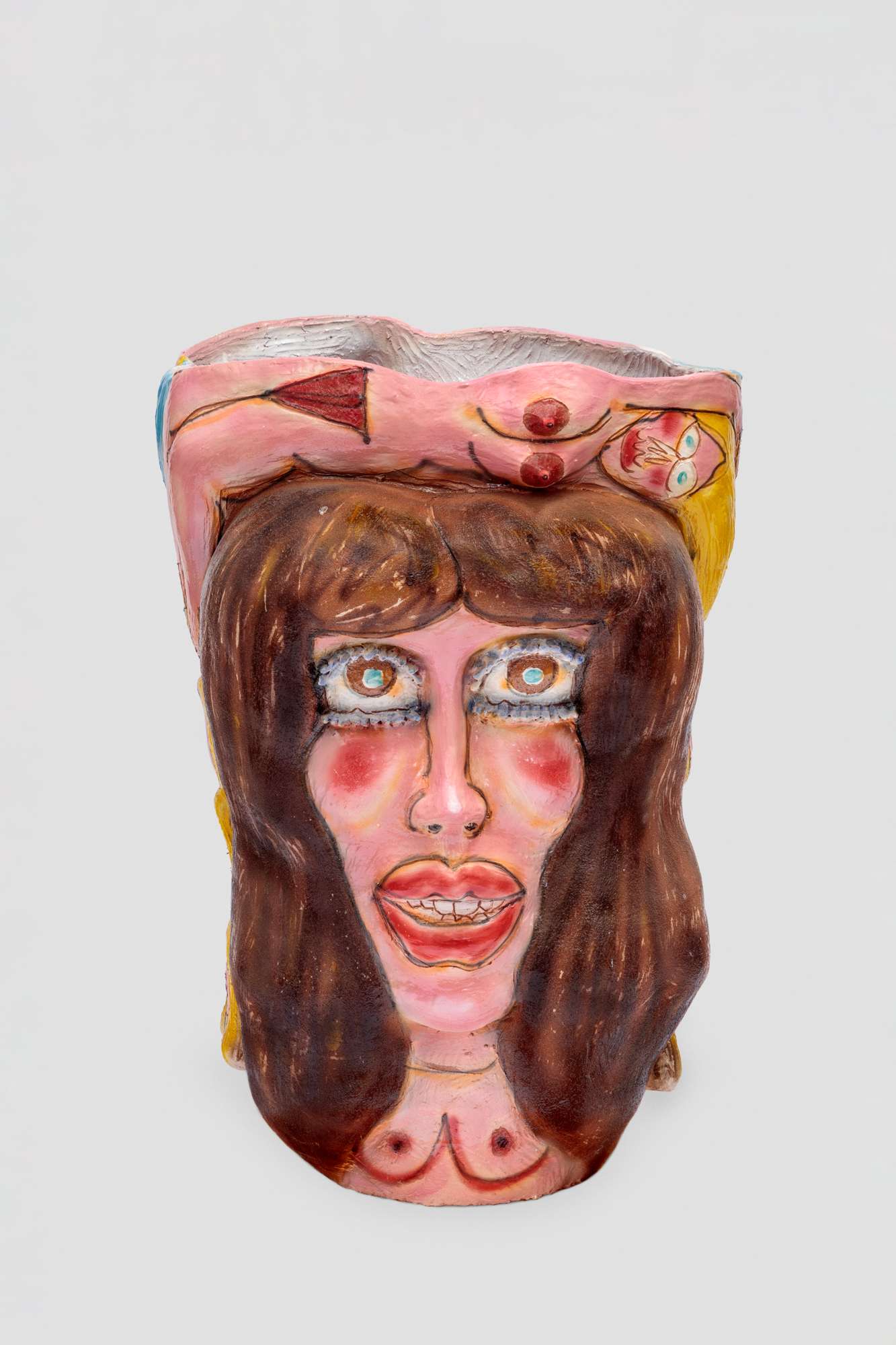 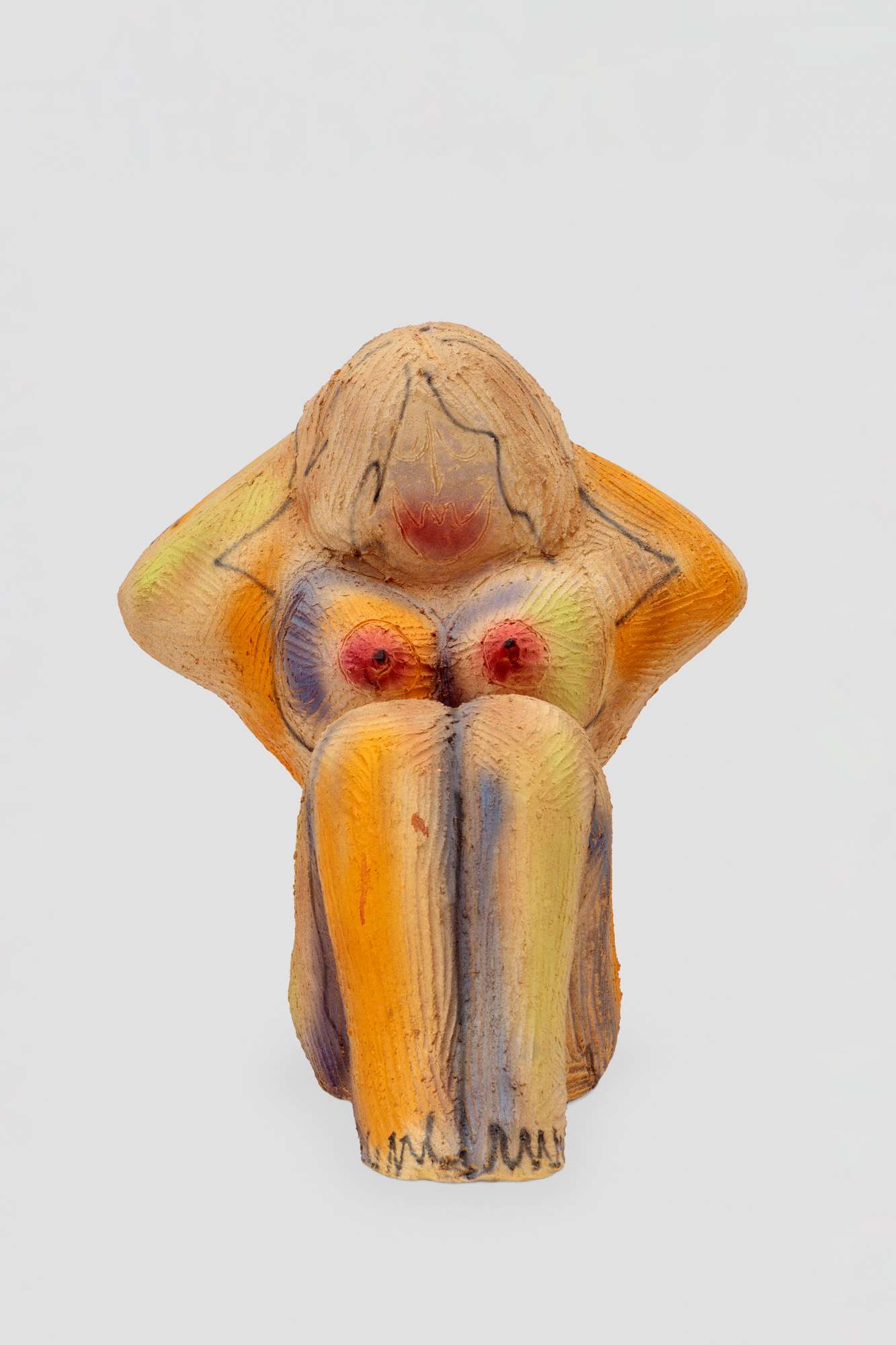 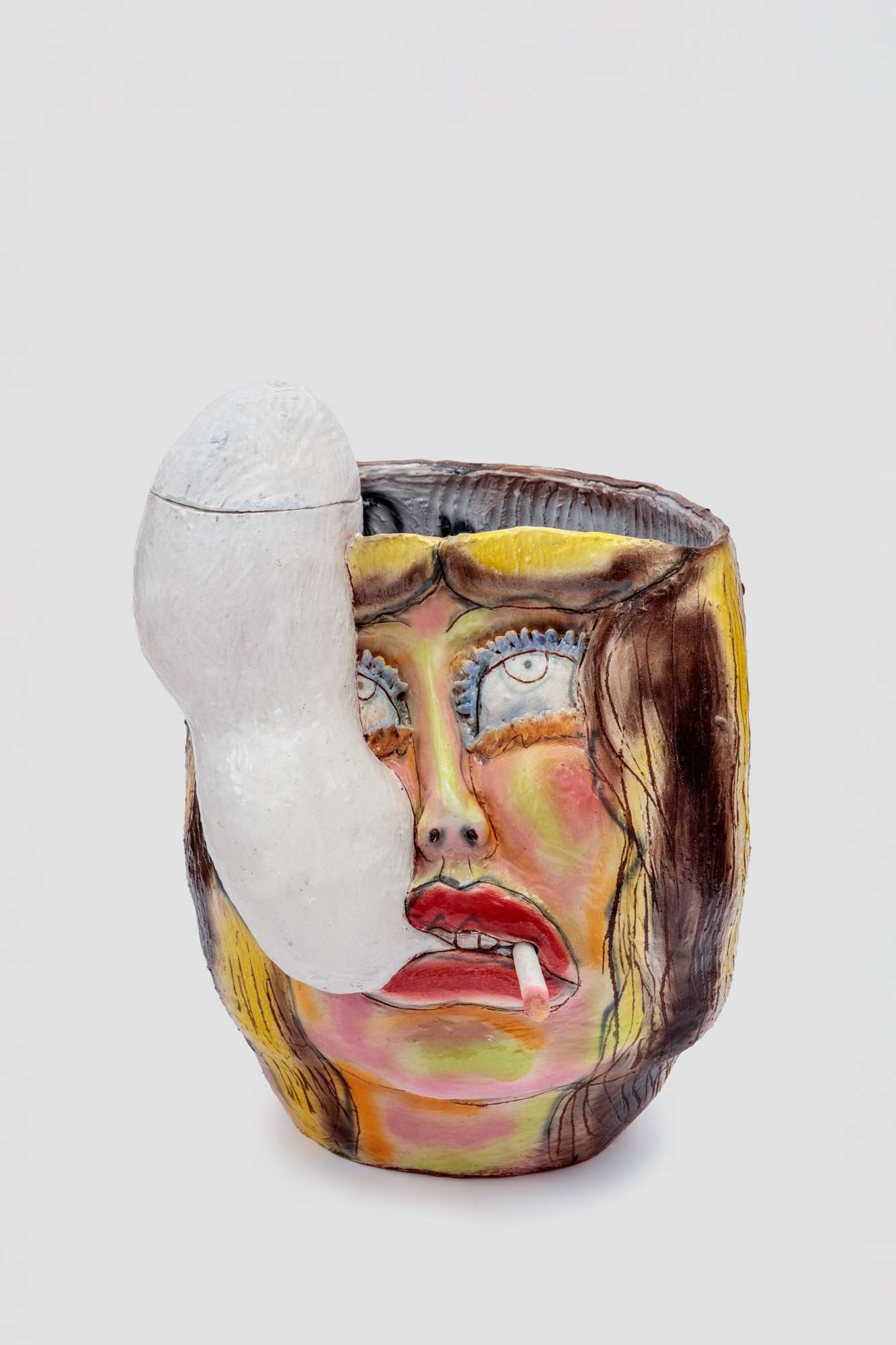 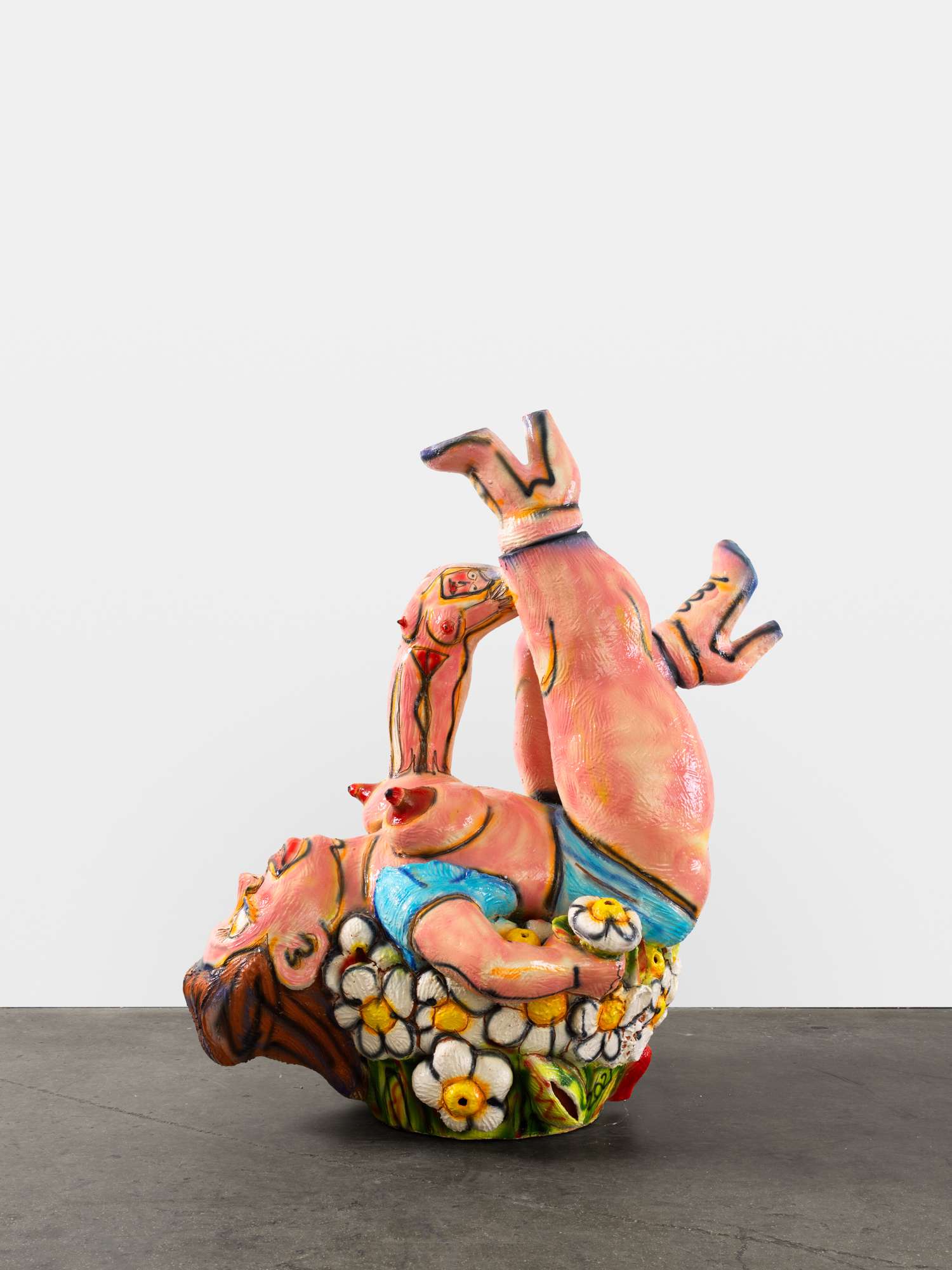 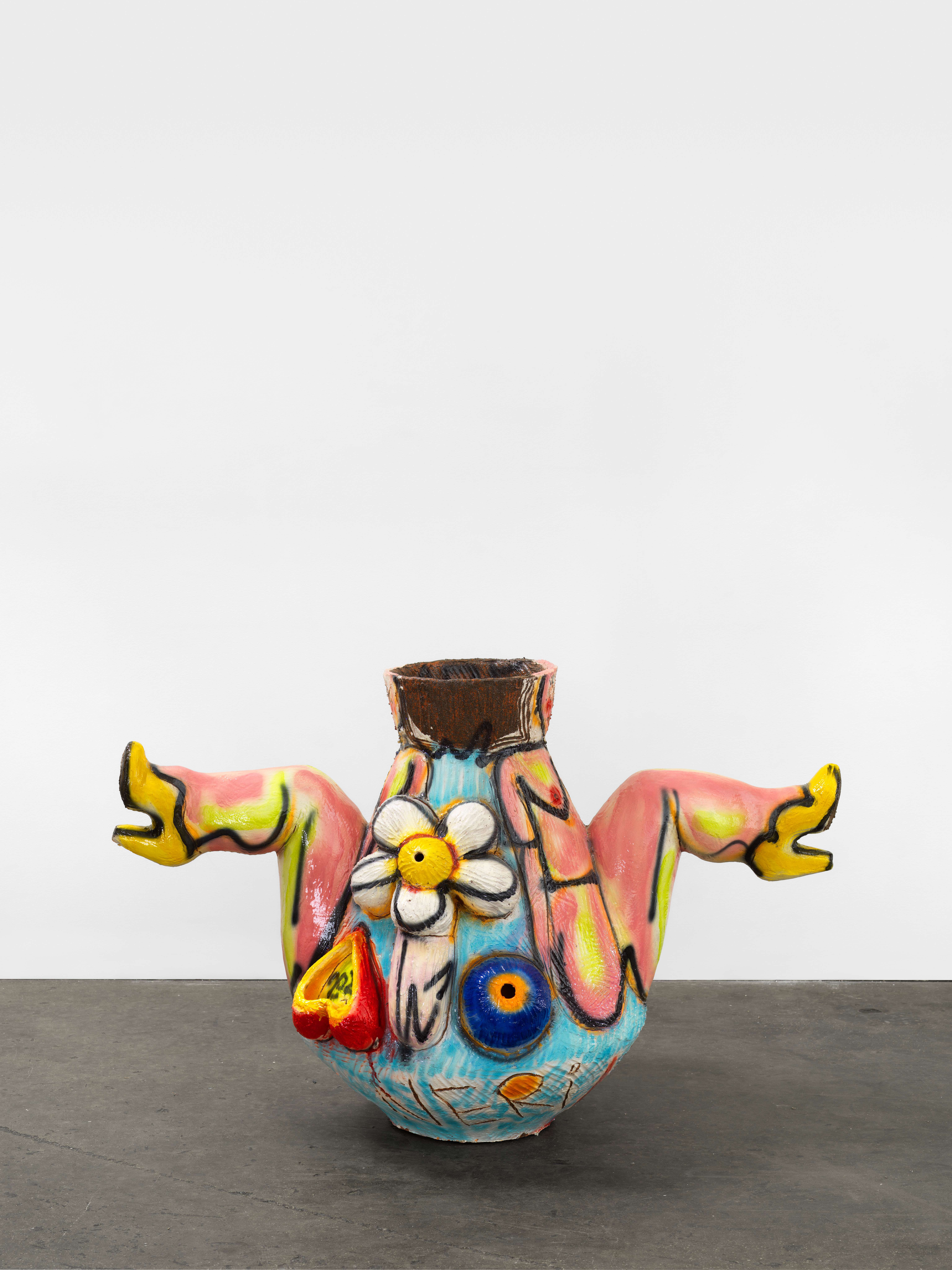 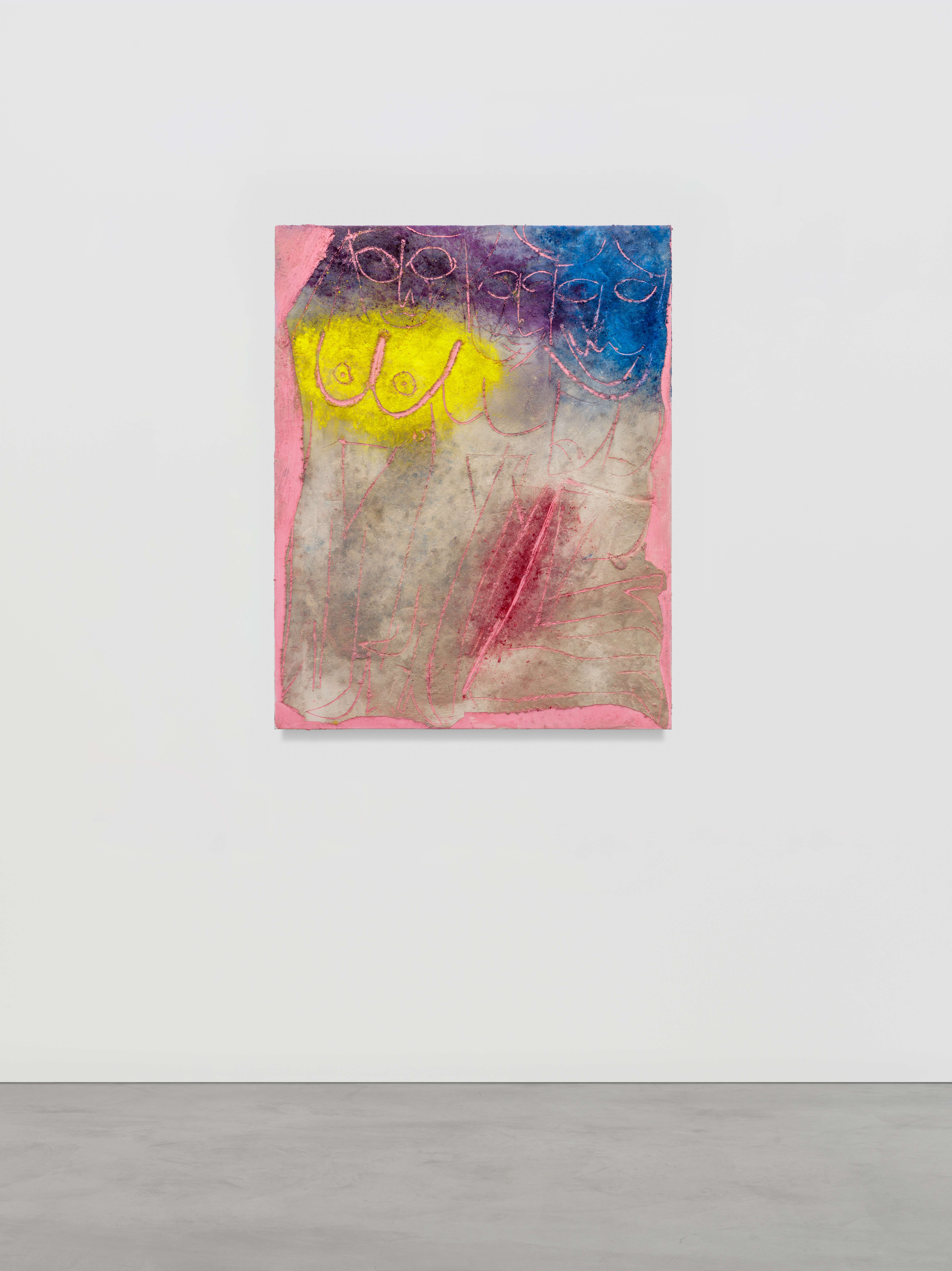 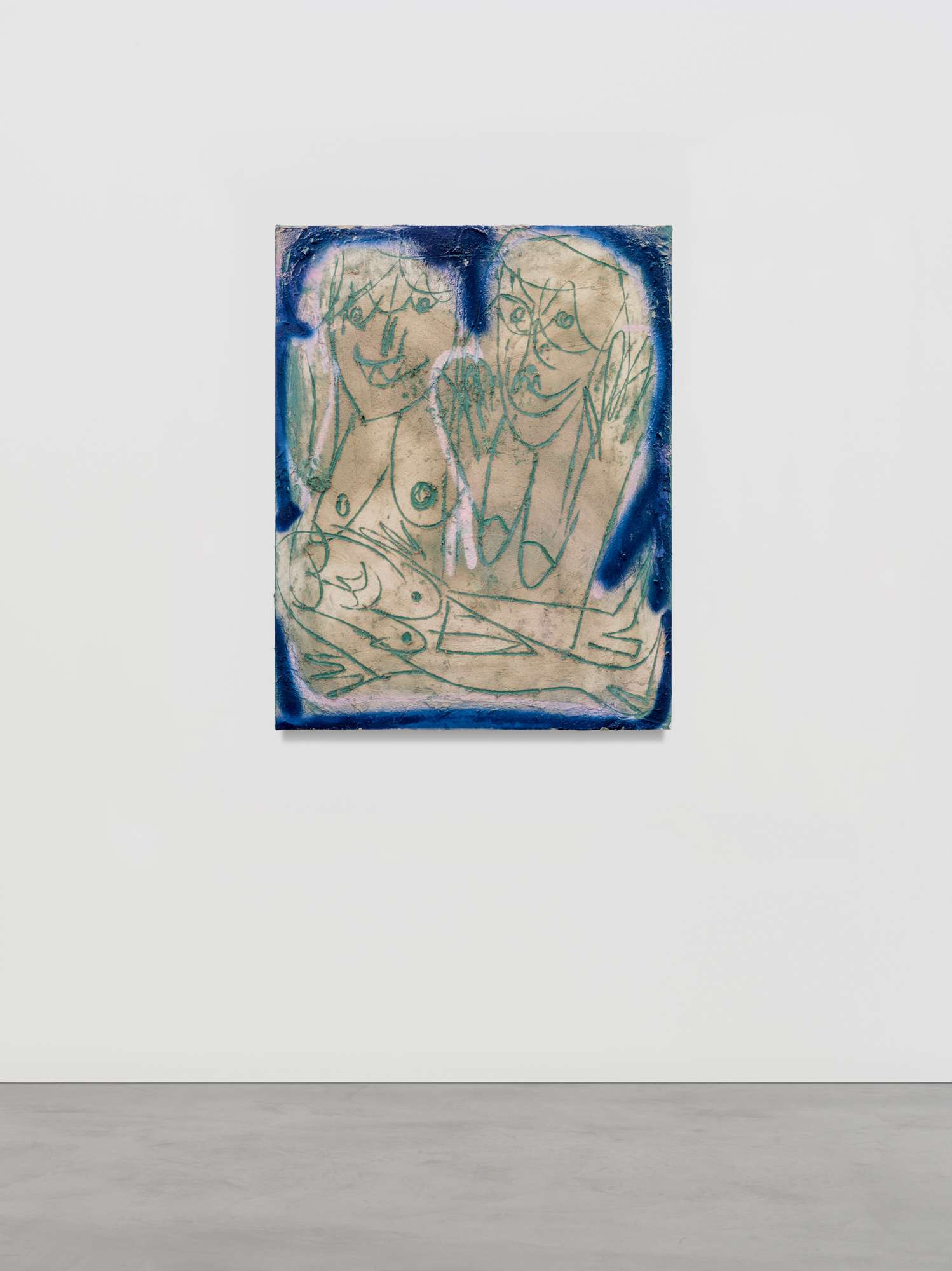 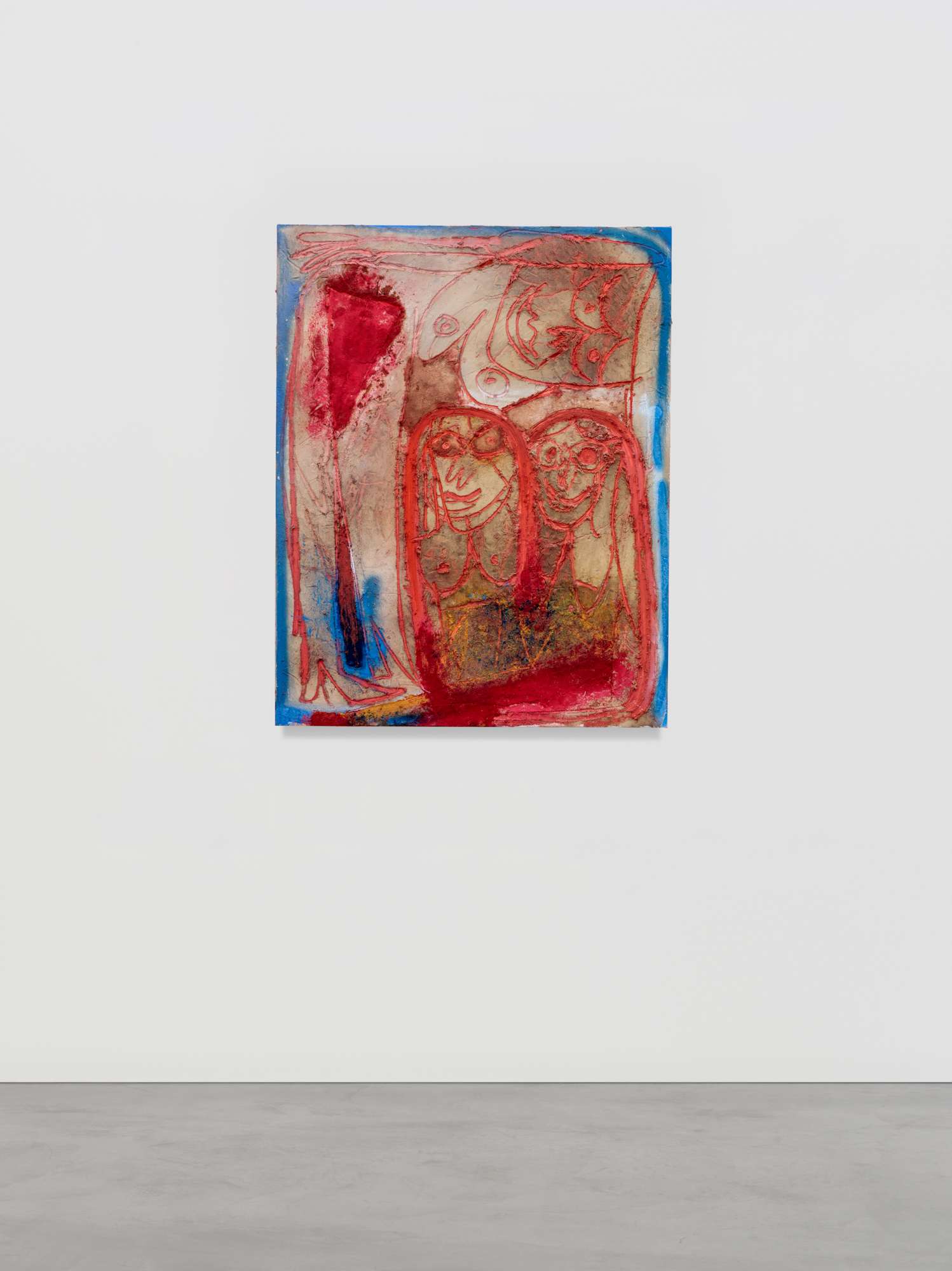 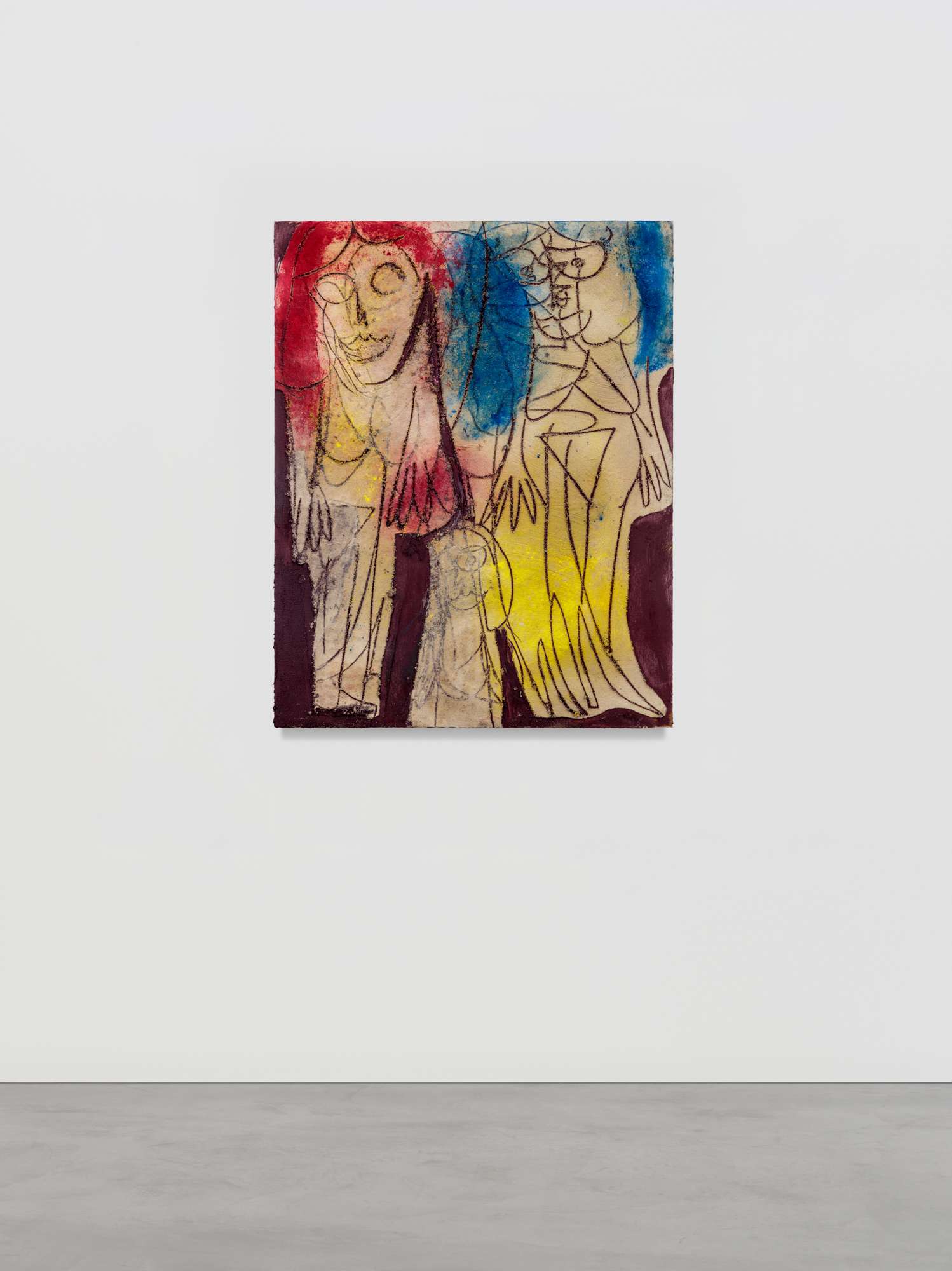 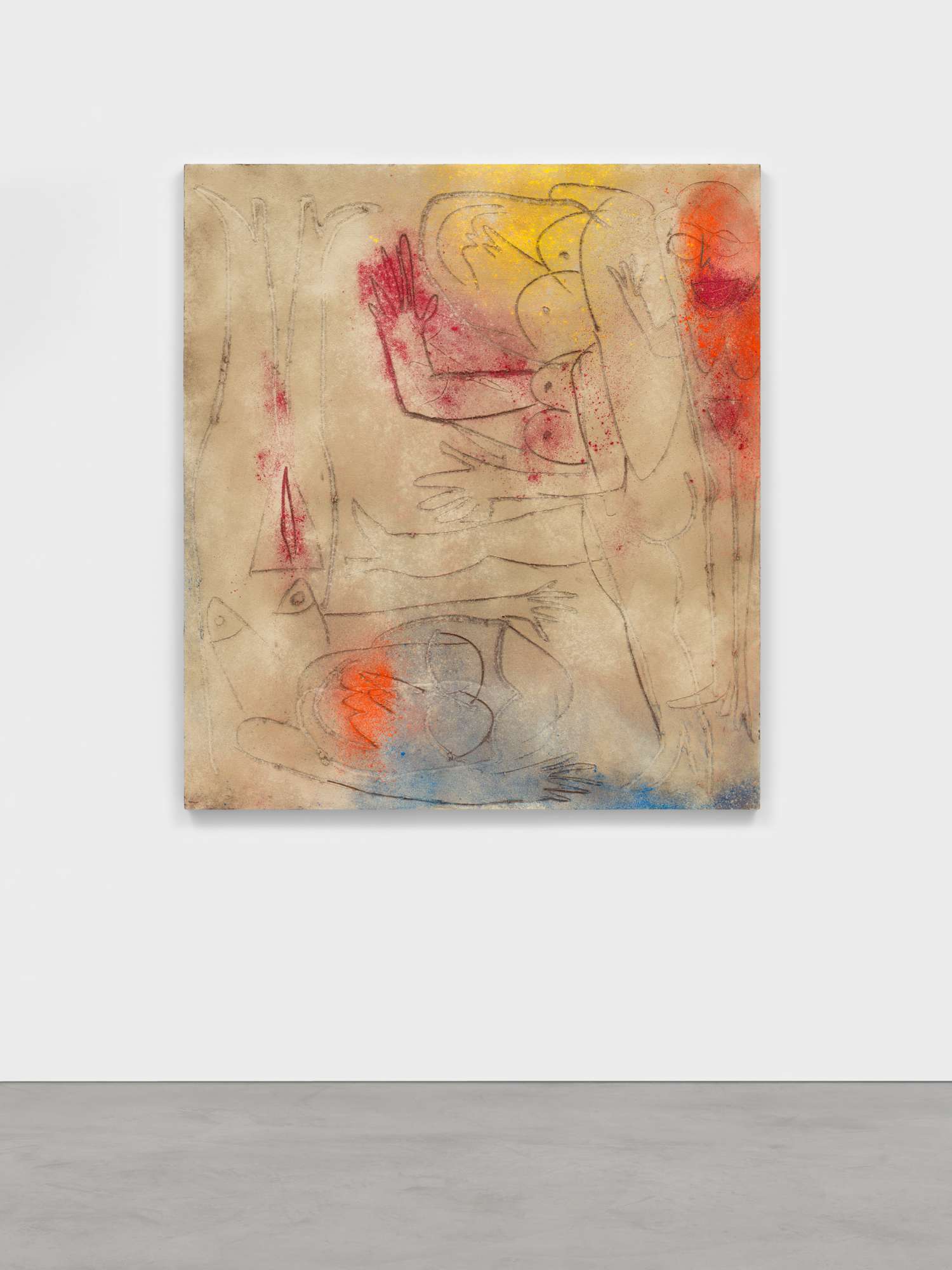 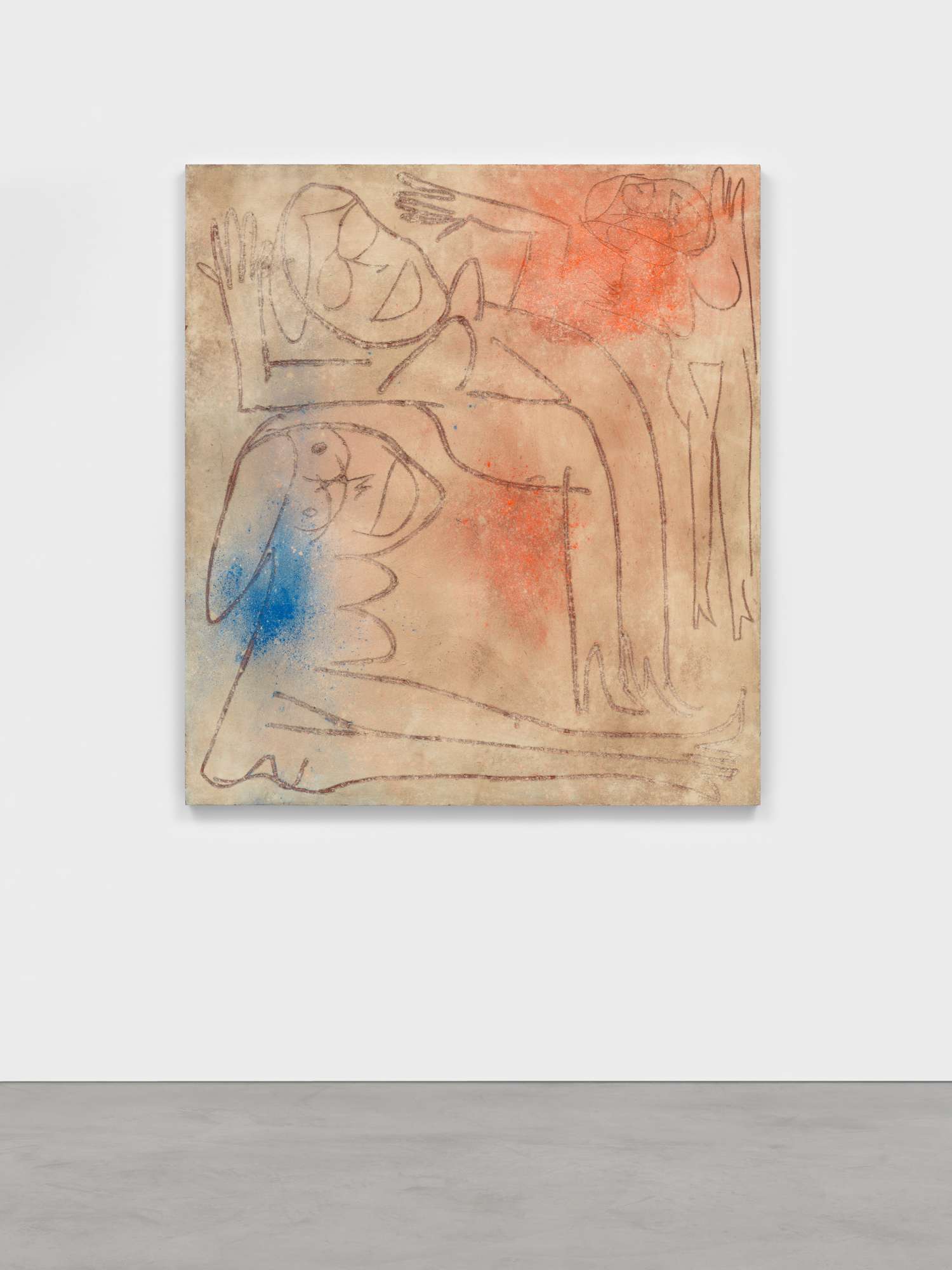 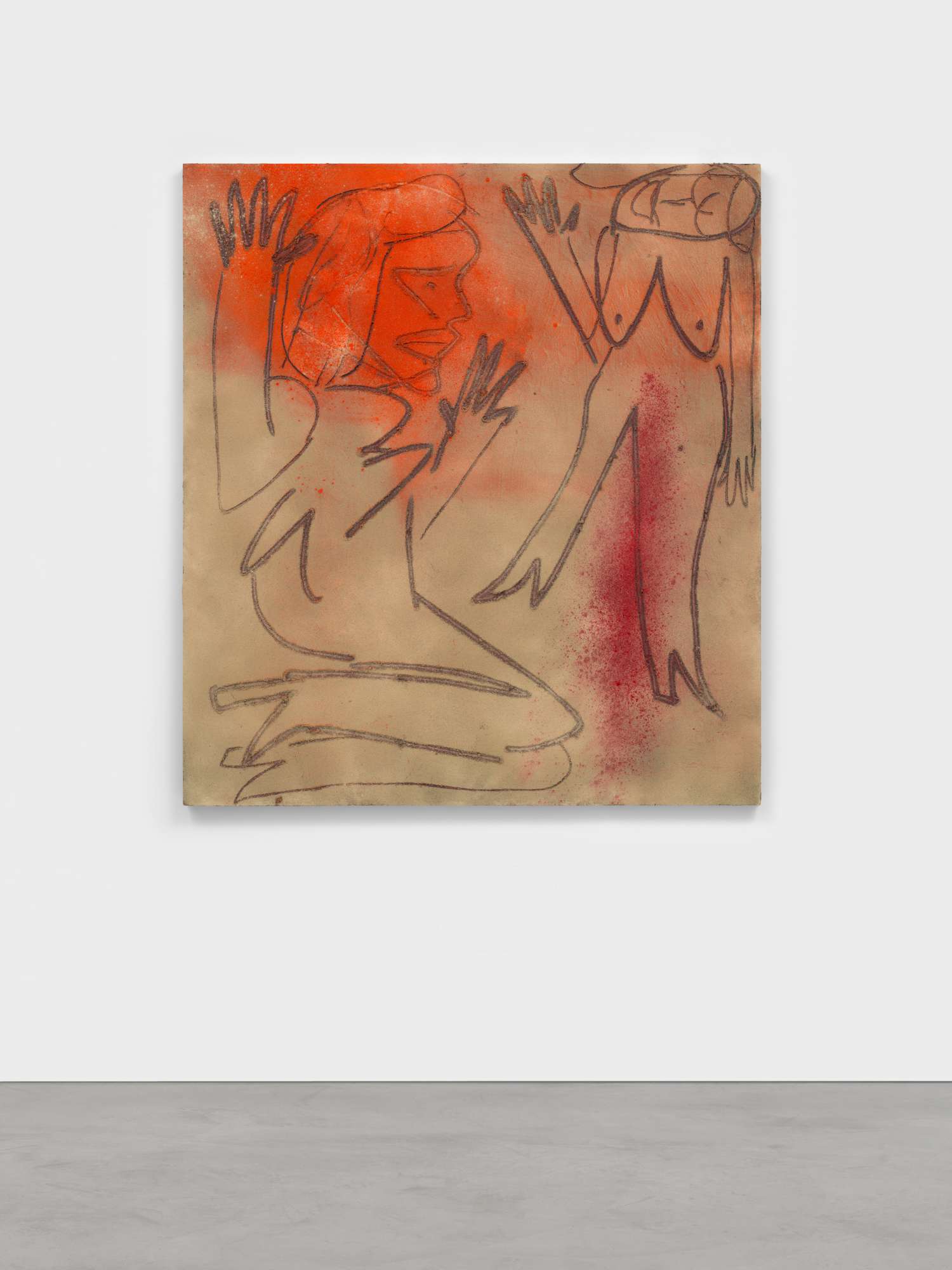 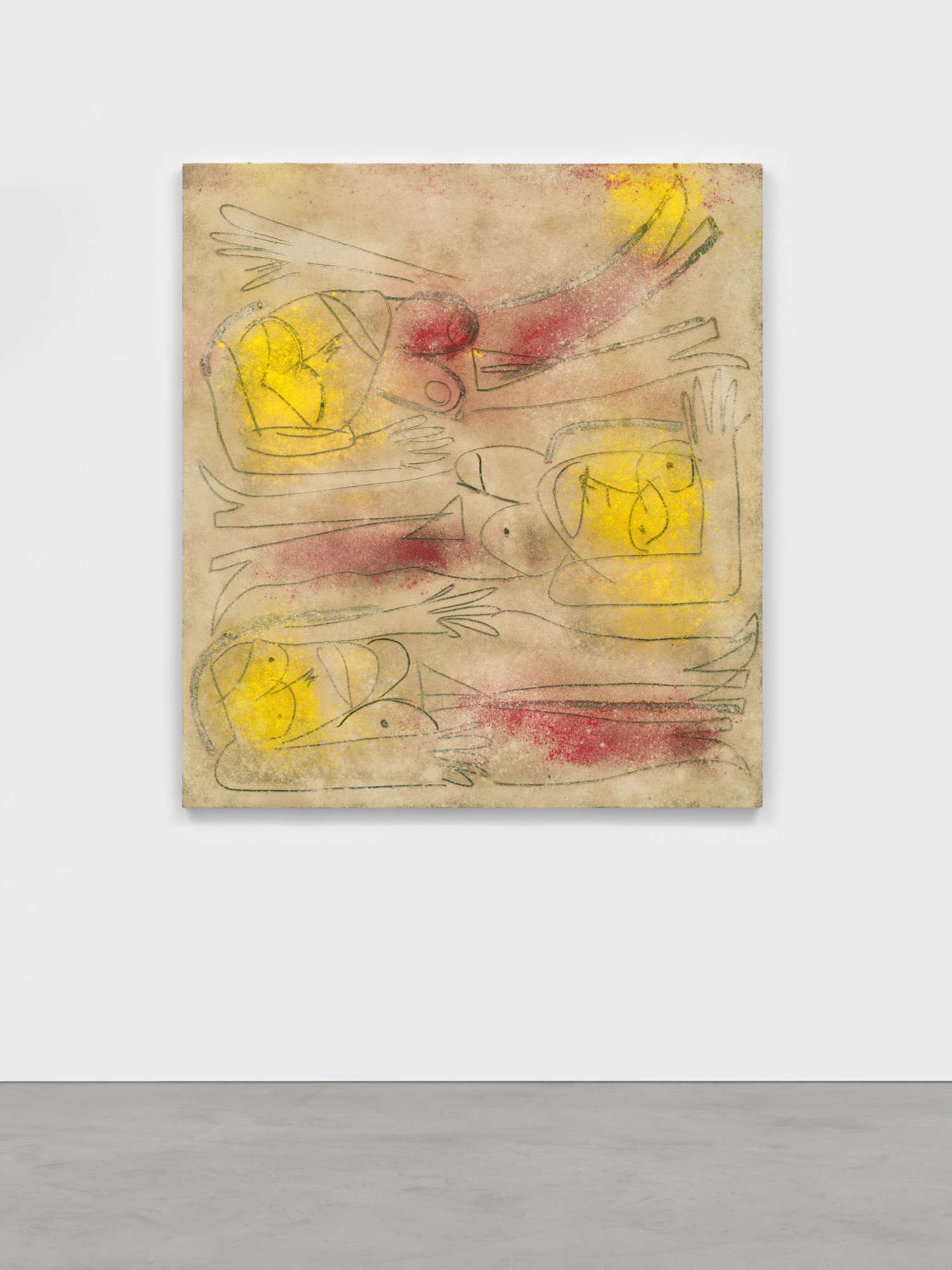 Salon 94 is proud to announce the opening of Leveled, an exhibition of new paintings and sculptures by the Los Angeles–based artist Ruby Neri. This is Neri’s second solo exhibition at Salon 94.

On the frontier between utopia and dystopia, Neri creates a world exclusively populated by wildly animated women. Neri offers that the works in this show were catalyzed by our current political moment, with reproductive rights under attack. Leveled explores the artist’s thinking about women against women, and women for women. “I wanted to create a world outside the male gaze,” Neri explains.

Hand-built using a coil technique, a dozen figures are fashioned from clay, then glazed in Neri’s signature airbrushed or sprayed glaze technique—gesturing to her early years as a graffiti artist in San Francisco. “I can’t stand paintbrushes,” Neri professes. Neri’s idiosyncratic visual style is further intensified by her distinctive palette of pinks, yellows, and blues, which plays off the strong chromatic qualities of her materials—including various types of clay with different intrinsic hues as well as white porcelain slip.

The intense visuality of Neri’s work bolsters the frenetic narratives suggested by her figures. In sculptures ranging in size from pedestal-bound to larger-than-life, her phalanx of female protagonists is rendered in dynamic states, whether in absurd interaction or direct conflict. Almost all of the voluptuous characters are either nude or in a suggestive state of undress, as if the corporeality of the clay enables their unbridled sexual agency. Many of Neri’s recent works humorously play upon well-known art-historical tropes. Excalibur (Pulling One Through), for example, subverts the classical Arthurian legend, transforming the knight into an Amazonian nude who pulls a smaller female character out of the sorcerer’s stone. Matriarch portrays a standing nude giantess who supports two smaller nude women on either shoulder and stands upon a third nude figure who wraps along her feet like a base—her sculptural embodiment of feminist utopia. A second standing nude with raised arms, entitled Distressed, conjures a libertine female version of the iconic sculpture Christ the Redeemer that overlooks Rio de Janeiro.

In addition to this ambitious group of ceramic sculptures, Leveled also marks the debut of a new series of paintings that Neri has made in direct relationship to her sculptural practice. Neri begins by mixing oil paint with dry clay, which she applies to a panel. The surface is then dusted with more dry clay and dry pigments, and Neri scores into the painting’s surface to create images, recalling the ancient technique of sgraffito. The resulting works present multifigure scenes of nude bodies rendered with raucous urgency, magnifying the energies of the three-dimensional works.

Neri’s riotous practice of figuration conjures a host of art-historical precedents—from the Bay area Funk Art that she grew up around and the gestural scribblings of de Kooning to Niki de Saint Phalle’s curvaceous Nanas and the cartoonish irreverence of Hairy Who artists Gladys Nilsson, Jim Nutt, and Karl Wirsum.

On view simultaneously to Neri’s exhibition is Betty Woodman’s monumental wall mural, House of the South. Woodman (1930–2018) was an early pioneer in the world of ceramics who for over sixty years created a hybrid of sculpture and painting that was highly inventive and unmistakably contemporary. Extending her work into the world around her, she created installations that evoked courtyards, rooms, and gardens. She depicted imaginary rooms of the artists she admired—Fra Angelico, Picasso, and Bonnard, to name a few—and found inspiration in the landscape, light, and colors of Italy, where she maintained a studio and home.

House of the South (1996) spans over twenty feet of wall and comprises dozens of vessels in the round, as well as flat relief cutouts. The euphonious swirl of flattened and deconstructed vase forms suggests a room redolent of columns and balustrades; the spaces in between the sculptures are as important as the elements themselves. House of the South was featured in Woodman's groundbreaking exhibition at the Metropolitan Museum of Art in 2006, The Art of Betty Woodman, which was the artist’s first major exhibition in the US and the Met’s first solo presentation dedicated to a living woman artist. The work has not been on public view since this seminal show.

Salon 94 is honored to provide a platform for intergenerational dialogue between Woodman and Neri. Both artists have challenged traditional hierarchies between art and craft and have expanded the conversation around gender, representation, and visual pleasure.

For information about the exhibition, please contact Alissa Friedman at alissa@salon94.com.

To schedule an appointment to view the exhibition, please visit salon94.com/visit