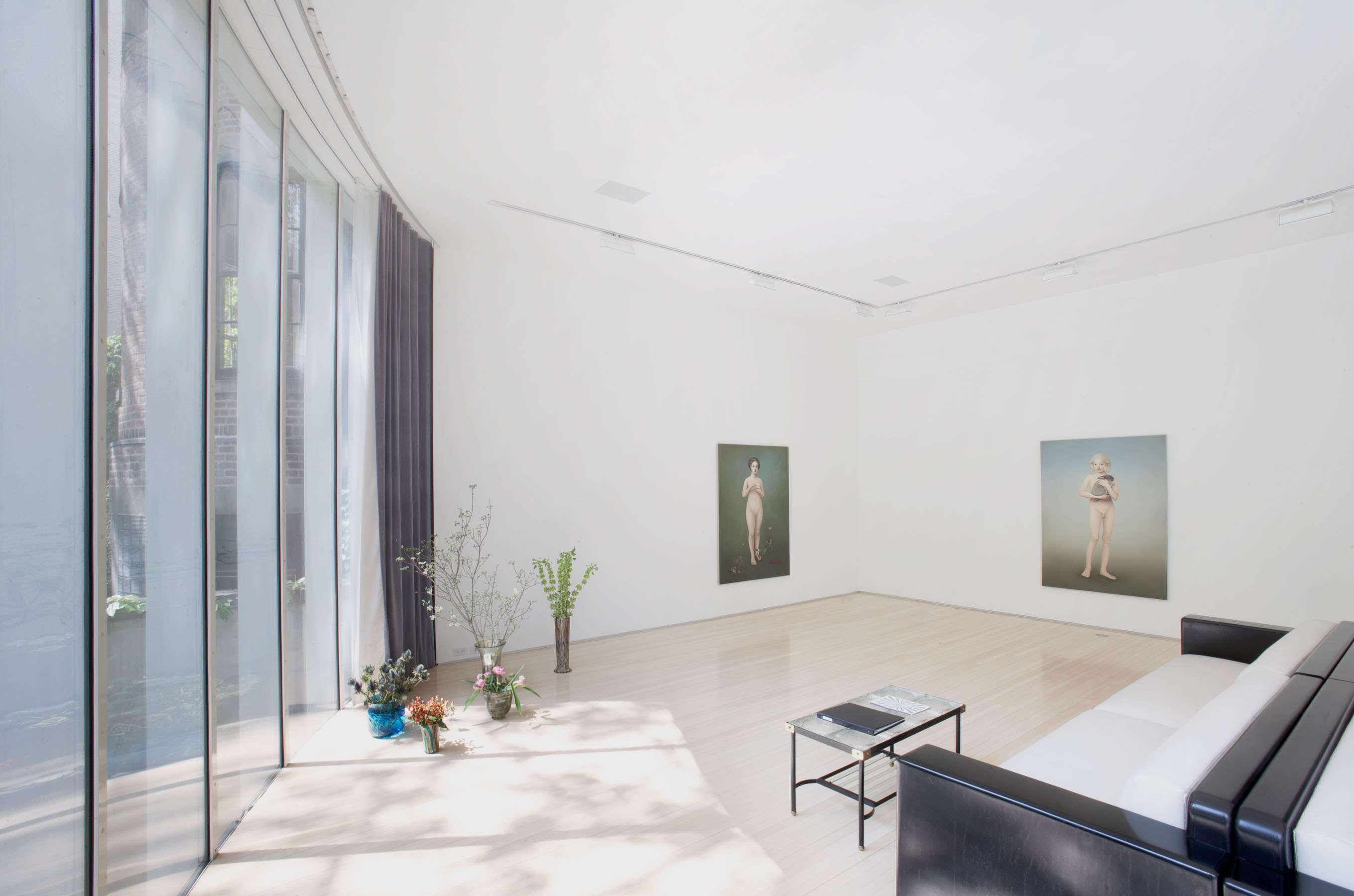 Richard Wathen The Valley is Broken

Salon 94 is pleased to present “The Valley is Broken,” a New York debut exhibition of London based painter Richard Wathen. The exhibition will feature two full-length nude portraits, one of a young boy, and the other a girl, paired with a large-scale idyllic landscape painting, a small portrait of a young woman and a self-portrait. Classic, yet arcane, the images invoke the Garden of Eden. Iris (2005) stands with a handful of flowers, while two butterflies and a snail dance at her feet. These scarce landscape elements, floating on the uniform green background, exist in her imagination- a protective landscape, her real space. Erin (2005) too stands within a flat barren space, holding a grey rabbit, a strange, neutral and expressionless pet. The characters in both portraits are lost yet contained in their own worlds, in a state of contemplation. The paintings hold names rather than titles. Who Iris and Erin are, their age, gender, time period, place, remains unanswered. Defying the tradition of the commissioned portrait, these names only hint toward an identity, in its most general terms.

“I am interested in how I can locate my own experience through a wide scope of seemingly arbitrary images and how they configure through the process of painting to create a specific state of loneliness. Often these states are expressed through the vacant resignation of a small creature, such as a rabbit or a perched kestrel, where the actual figure remains a mute and vulnerable prop.“ Richard Wathen

In A.R.W. (2005), the artist creates a ghostly image of himself, with traits of what he imagines his ancestors resembled: self-portrait, mixing past, present and future. As in Iris, the nature element lingers, and one can not help to notice the stillness of the garland, frozen, as if a whole life, from birth to death is conflated into one image. Created from multitudes of details from sources as eclectic as Jean-Antoine Watteau, François Boucher, Botticelli, Edward Hicks, Victorian photography, Jan Brueghel, 1970’s encyclopedias, and his own photographs, Wathen’s paintings hover between the familiar and the unknown.

Over The Moor (2003) is delicate half length portrait of a woman in a misty country landscape. Wearing a light pink dress and holding a bouquet of spring flowers, she could have jumped out of a Watteau painting. Her familiarity soon fades into something more uncanny, as her torso fades and through it appears the landscape surrounding her.

Lower Kingdom (2005) is part of an ongoing series of animals in landscapes by the artist. The series references Edward Hicks, Peaceable Kingdom, a painter and Quaker minister fromPennsylvania, who made several versions of the same image inspired by a psalm, Chapter 11 by Isaiah, extolling a message of peace between animals and humans. Wathen gathers in a ‘non-place’ animals from various biotopes, leaving out humans. The stillness of the animals brings to mind dioramas and taxidermzied animals, rather than live ones. This desirable, utopian landscape exists as an imaginary one. Like Wathen’s undressed human subjects, most of these animal stare out of the canvas, gazing at us. Here they question our presence as much as we scrutinize theirs.