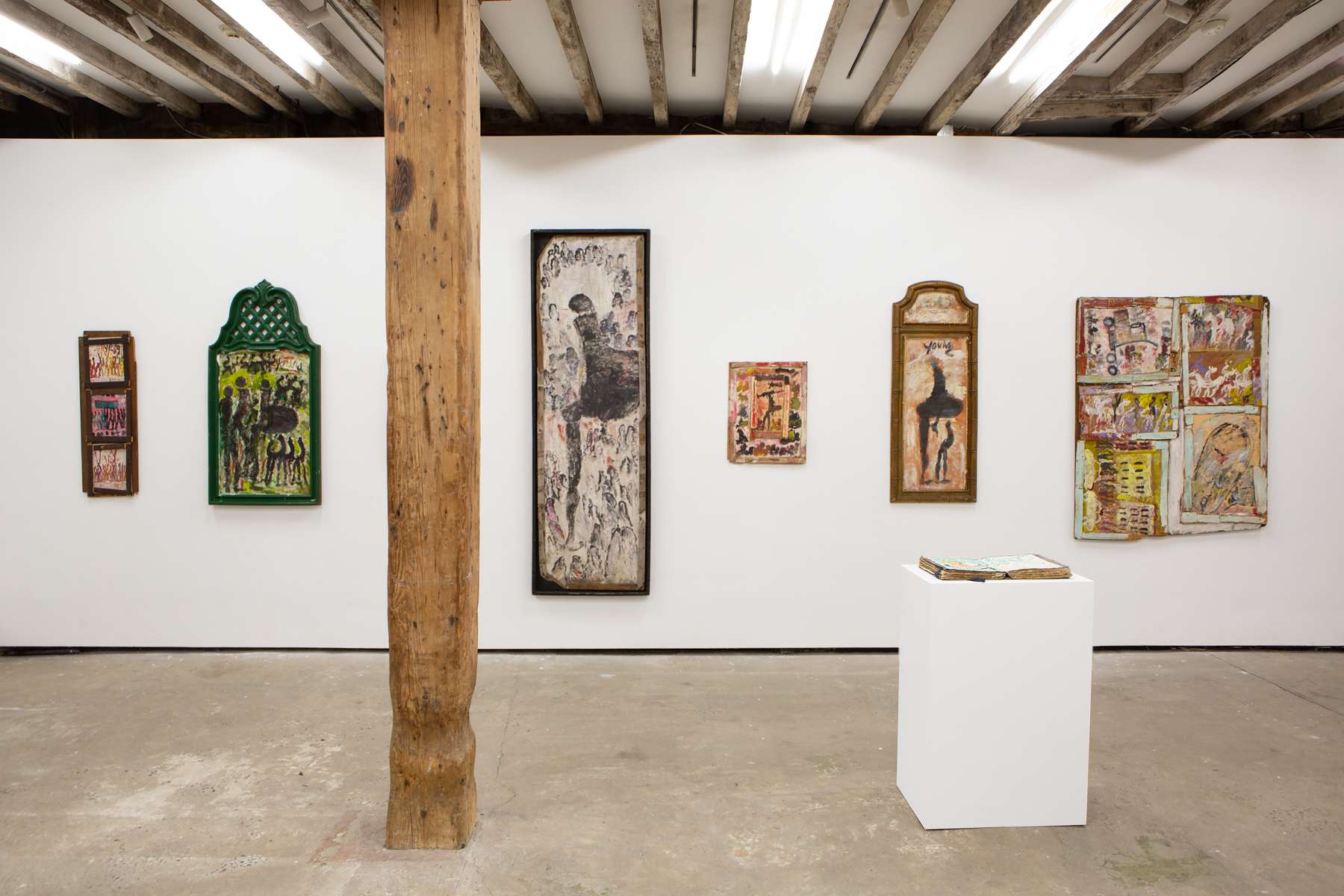 “The art of Purvis Young is equal parts calligraphy, music, and graffiti. Its basic themes bump, collide, and eventually unite to reveal the chaotic and cacophonous dance of birth, death, and all that transpires in between in the artist’s world.” — William Arnett, excerpted from his essay published in Souls Grown Deep, 2000.

Salon 94 is pleased to present an exhibition of paintings and artist’s books by the late Purvis Young. After years of being labeled an “outsider artist”, Young’s beautifully rendered expressionist tableaux have captured the zeitgeist and imagination of contemporary audiences worldwide. With a major exhibition of his work on view at The Rubell Family Collection in Miami and a special exhibition to be held during the Venice Biennale, Young firmly enters the ever-expanding canon of art history. This exhibition marks his inaugural exhibition at Salon 94 and his first solo show in New York in a decade. To mark the occasion, James Fuentes Gallery located three blocks away will mount a concurrent exhibition of Young’s work.

Born in Miami in 1943,Young became a local cultural icon as an entirely self-taught artist who dealt with the plight of the underprivileged and the consequences of racism and daily violence through a highly distinctive visual idiom. Purvis Young lived his entire life in the Miami neighborhood of Overtown, once an entertainment destination as well as a designated black neighborhood in the segregated South. In the 1950s, the town would experience a stark economic downturn, becoming a hub of destitution and crime that would last well into the 1990s. It was in this climate that Young found his artistic voice transforming urban decay into allegories of dignity and hope.

Purvis Young began poring over art books while serving a three-year prison sentence for breaking and entering in his late teens, meanwhile developing his own visual lexicon. Masters like Van Gogh, Rembrandt, and El Greco rekindled his early love of drawing, something his uncle had introduced him to as a child. After his release,Young found inspiration in the Chicago and Detroit anti-Vietnam War murals he had seen on the news and began to paint. These movements would help him grapple with the poverty, urban decay, economic injustice, and unequal access to education around him. AsYoung has said in interviews with William Arnett and Larry Clemons in 1994 and 1995: “I seen people protesting. I seen the war going on. Then I found out how these guys paint their feelings up North, paint on walls.” Dilapidated structures—social as well as physical—would become his materials and, in a sense, his subjects. With a gestural approach and a complex symbology, his art began to attract attention beginning with Good Bread Alley, a derelict alley that in 1971 became the site of Young’s most extensive project. “I wanted to express my own feeling. I wanted the peoples to see it,” he said of the site, which at its peak comprised a dense patchwork of paintings on reclaimed wood which Young had affixed to the boarded-up storefronts.The alley soon drew tourists and eventually even attracted art-world patronage, most notably the support of the collector and Miami Art Museum founder Bernard Davis, who brought Young into the wider public eye.

The first images Young made as an adult were of angels and holy men who sometimes hovered above cityscapes or floated alone on a panel. He saw these figures as symbols of salvation for humankind. Pregnant women were another frequent subject for the artist as they represented hope, creativity but also the ever-present danger of living amongst drugs and urban decay. Protestors, funerals, warriors and wild horses were some of the other motifs that Young employed. In addition to a selection of paintings which draw on many of these motifs, Salon 94 will feature artist’s books which Young created from repurposed tomes found in the Miami public library. These books present a fascinating dialogue between traditional academic texts, illustrations and his own poetic language.

His characteristic use of reclaimed materials has drawn comparisons to modern assemblage artists like Joseph Cornell, Robert Rauschenberg, and Bruce Conner. While Young’s work has much in common with such art-world luminaries, his artistic concerns were quite apart, perhaps necessarily so;Young’s work channels Western art history, and yet it was compelled by the visceral sense of struggle surrounding him. His rich visual lexicon combines profound spiritual sensitivity and virtuosic skill into nuanced works of art that are as sophisticated as they are primordial and immediate.This sensibility results, according to William Arnett, in “a resolute and ambitious vision from a man who has appointed himself Overtown’s resident historian…He searches for truth and accuracy, so that his own art will not misinform or mislead.” At the end of the day, though, Young himself says it best: “I make like I’m a warrior, like God sending an angel to stop war. I think, like, I’m one of the figures in my art.”

“I make like I’m a warrior, like God sending an angel to stop war. I think, like, I’m one of the figures in my art.” — Purvis Young

A large-scale exhibition featuring over 100 of his paintings will be on view at The Rubell Family Collection in Miami, FL until June 29, 2019. On the occasion of the 2019 Venice Biennale, a solo presentation of the work of Purvis Young titled Personal Structures will be on view from May 11 - November 29, 2019 at the European Cultural Centre, Palazzo Mora.