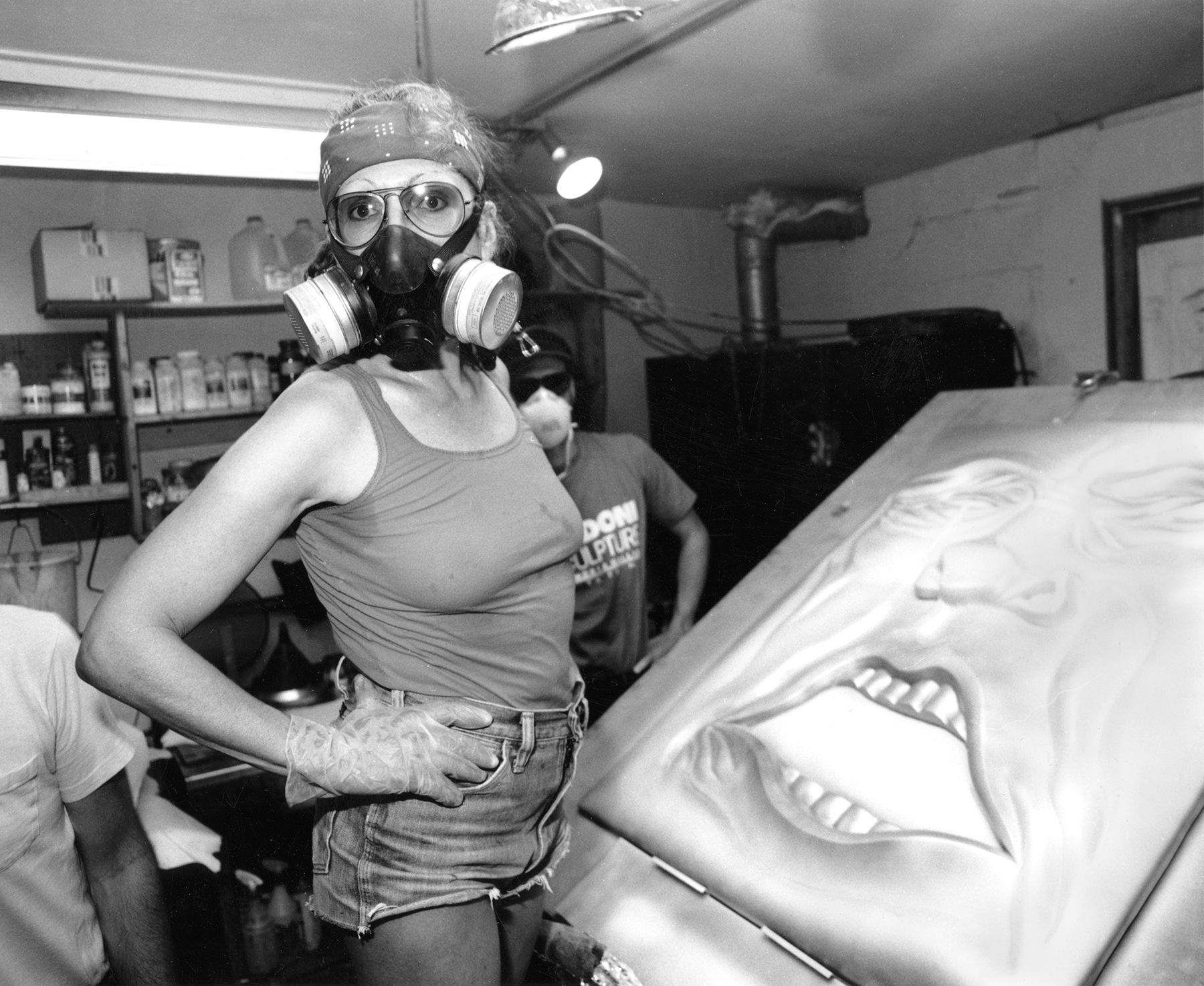 From 1982 through 1987, the celebrated and iconic feminist artist, Judy Chicago, created a body of work examining the gender construct of masculinity. In a series of drawings, paintings, cast paper and bronze pieces, she explored how prevailing definitions of power have affected the world in general — and men in particular. More than thirty years after Chicago completed PowerPlay, Salon 94 is proud to present a select group of works from this prescient series in Chicago’s inaugural exhibition with the gallery.

Four monumental paintings will be on view at Salon 94 Bowery. After the furor and acclaim that she received from The Dinner Party (1974-79), with its decidedly female subject matter and evolving feminist iconography, and while simultaneously working on Birth Project (1980-85) which explored aspects of the birth process from the painful to the mythical, Chicago turned to an entirely new subject: man. While traveling through Italy in 1982, Chicago was inspired by the style and scale of Renaissance painting. Having already mined several art forms including minimalist sculpture, large-scale installation, ceramics and china-painting, textile-based works, performance and even auto body painting, Chicago developed a new painting technique which sought to reproduce the vibrant color and luminosity of the Renaissance precedents. The technicolor figures pop off the Belgian canvases- a combination of a clear gesso base, sprayed acrylic under paint, and thin layers of oil paint on top.

In preparing for PowerPlay, Chicago executed extensive drawings of the male nude, which she recalls as being frightening and difficult due to only ever having access to female models during her art education. With the PowerPlay series, Chicago paved an early path for many female artists who came after her, by appropriating and reversing the male gaze that men had used for centuries to depict the female figure. As she stated the year she began the series, “I knew that I didn’t want to keep perpetuating the use of the female body as the repository of so many emotions; it seemed as if everything – love, dread, longing, loathing, desire, and terror – was projected onto the female by both male and female artists, albeit with often differing perspectives. I wondered what feelings the male body might be made to express.”

Chicago recognized in Renaissance painting, the conflation of the birth of modern society with that of the ubiquitous male hero. Her stylized sinewy male bodies are decidedly reminiscent of the Socialist Realism used in Soviet-era art, particularly in propaganda used by the Russian government to invoke nationalistic pride and to glorify and propagate the ideologies of authoritarian leaders. Rather than portray the male figure as a hero in her own work, Chicago pulls back the curtain to reveal an uglier side of man that is alarming, revolting and eerily predictive. In typical Chicago humor, her fallen heroes are drunk with patriarchal power as they drive destructively, "piss on nature", pull hair, pick their noses and stick out their tongues. In the centerpiece of the show, the massive triptych titled Rainbow Man, the worst deed of all is preformed, the “bait and switch”, which Chicago likens to the Trumpian tactics used in the 2016 election.

When PowerPlay was first shown in 1986 at ACA Galleries in New York, it received scant attention and continued to be her least recognized body of work. Though now, more than thirty years later, her depictions of the male figure in various states of acting out in unscrupulous ways could not be more relevant to our contemporary dialogue on the abuses of power that we are experiencing and witnessing first hand.

Also on view for a limited time at 1 Freeman Alley, Salon 94 will present a group of unique cast bronze and paper wall sculptures and a series of fiercely colored small paintings. The scowling, contorted and forlorn male faces evoke the embellished facial expressions of an operatic chorus. They collectively call out like lost souls, giving one the sense that they are in a purgatorial state of suffering; victims of their own misdeeds.

On January 13, 2018, Salon 94 hosted a conversation at Salon 94 Bowery with Judy Chicago, Jonathan Katz and Michael Kimmel. Jonathan Katz is an activist, art historian and writer working with the intersection of art history and queer history, particularly during the Cold War era. He is currently the director of the doctoral program in Visual Culture Studies at State University of New York (SUNY), Buffalo. Michael Kimmel is a leading expert on men and masculinities and is currently the SUNY Distinguished Professor of Sociology and Gender Studies at Stony Brook University. A recording of this event is available on request.

Born Judy Cohen in Chicago, Illinois, in 1939, Chicago, whose influence and worldwide recognition are remarkable, is at once an artist, author, feminist and educator with a career now spanning fifty years. She attended the Art Institute of Chicago and the University of California, Los Angeles and her early Minimalist work was part of the landmark Primary Structures exhibition in 1966 at The Jewish Museum in New York. In the late sixties and early seventies, after a decade of professional art practice during the height of the male-dominated Minimalist and Light and Space movements, Chicago began to make a conscious departure from abstraction and move toward figuration. She also changed her last name to Chicago after the town of her birth, shunning the patriarchal and societal construct of taking the father’s last name, and pioneered Feminist art and art education through a unique program for women at California State University, Fresno, a pedagogical approach that she has continued to develop over the years. In 1974, Chicago turned her attention to the subject of women’s history to create her most well-known work, The Dinner Party, which was executed between 1974 and 1979 with the participation of hundreds of volunteers. This monumental multimedia project, a symbolic history of women in Western Civilization, is permanently housed at the Brooklyn Museum as the centerpiece of the Elizabeth A. Sackler Center for Feminist Art. Roots of “The Dinner Party”: History in the Making is currently on view at the Brooklyn Museum through March 4, 2018. In early 2018, Salon 94 will publish a fully illustrated catalog to coincide with and expand on the Roots exhibition.

The artist’s works are held in museum collections throughout the world, including the British Museum, London; Moderna Museet, Stockholm; Tate Gallery, London; Metropolitan Museum of Art, New York; National Gallery of Art, Washington, D.C.; Los Angeles County Museum of Art; Museum of Contemporary Art, Los Angeles; Hammer Museum, Los Angeles; Getty Trust and Getty Research Institute, Los Angeles; San Francisco Museum of Modern Art; and over twenty five university art museums including Brandeis, Cornell, Harvard, Illinois, Michigan, UCLA, Canterbury (New Zealand), and Cambridge (UK). Over the past several years Chicago’s works have been included in a broad range of major group exhibitions such as Pacific Standard Time: Art in L.A., 1945–1980 organized by the The J. Paul Getty Museum, Los Angeles, Ends of the Earth at Haus der Kunst, Berlin, Pretty Raw: After and Around Helen Frankenthaler at the Rose Art Museum, Waltham, MA and The World Goes Pop at Tate Modern, London. Chicago’s traveling solo exhibition Why Not Judy Chicago? was also recently on view at the Musée d’Art Contemporain in Bordeaux, France. Her solo exhibition Inside the Dinner Party Studio at the National Museum of Women in the Arts, Washington, D.C. was on view from September 17, 2017-January 5, 2018 and Roots of “The Dinner Party” History in the Making at the Brooklyn Museum will be on view through March 4, 2018. Forthcoming, Chicago’s works will be the focus of the group exhibition Tuer l'ennui, The Sixties in SoCal at the Villa Arson in Nice, France, opening in June, 2018. The Institute of Contemporary Art, Miami, will present a major survey of her work opening in December, 2018. Her forthcoming monograph will be published by Scala in January, 2019. Chicago lives and works in Belen, NM.