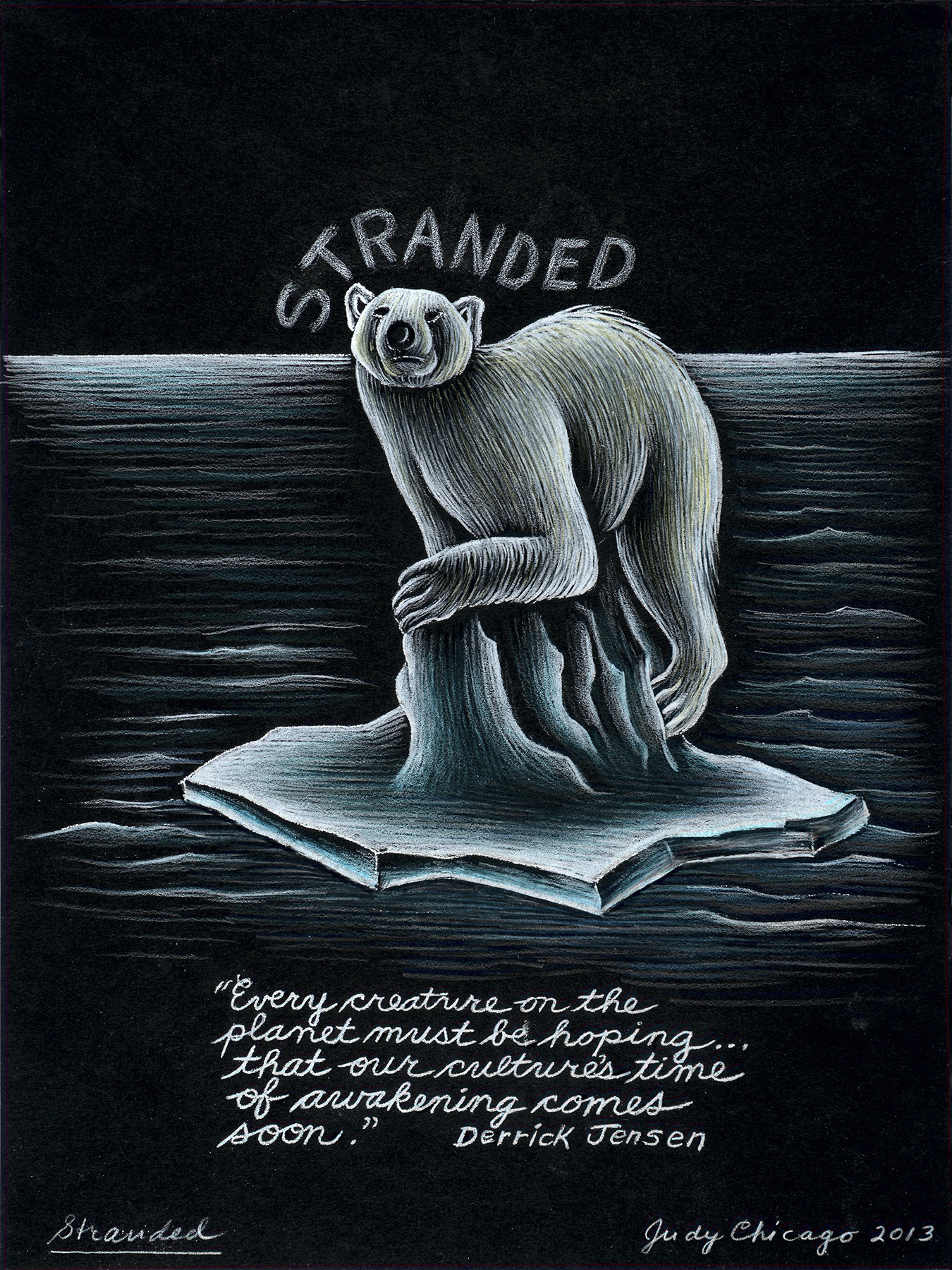 Picturing Extinction: Studies for The End

Throughout her celebrated career, pioneering artist Judy Chicago has tackled a series of subjects that are either taboo or absent in the art historical discourse, usually decades before these subjects have been addressed by other artists. These include menstruation (the “Menstruation Bathroom); women’s history (“The Dinner Party”), birth (the “Birth Project”), the construct of masculinity (“PowerPlay”), the Holocaust (the “Holocaust Project:) and inter-species relationships (“KIttyCity”). She has also worked in diverse mediums; painting, sculpture, needlework, porcelain, fireworks and, more recently, glass.

Given her history as an artist, it is no surprise that she has addressed mortality and the impending extinction of multiple species in her most recent project six years in the making. “The End: A Meditation on Death and Extinction”, is currently on view at the National Museum of Women in the Arts (NMWA) in Washington, D.C. Comprising nearly forty works of painted porcelain and glass, as well as two large bronze reliefs, “The End” required extensive drawings, a number of which Salon 94 is proud to present in its Freeman Alley Gallery.

Judy Chicago: Picturing Extinction; Studies for The End includes studies for the “Extinction” section and selected glass pieces from “The End.” In these drawings, Chicago presents a grouping of species and living things who exist without any clear possibility of survival. From elephants killed for their tusks to trees flayed of their bark for medicinal purposes, the artist offers her lament for the harm human beings are inflicting world-wide. Chicago’s handwriting, which has long been part of her artistic practice, becomes an integral part of the composition of these drawings. The artist pictures a foretelling of extinction, presenting a grouping of species who exist without any clear possibility of survival: each work is titled with epithets including: Stranded, Vulnerable, Poached, Silenced, Smothered, Battered, Finned, Debarked, Targeted, Harvested, Smuggled, Bleached, Collected, Declining, and Doomed. In (Study for) Stranded, 2013 Chicago portrays a lone polar bear stranded on a shrinking piece of ice and quotes environmentalist Derrick Jensen, “Every creature on the planet must be hoping…that our culture’s time of awakening comes soon.” Chicago’s trailblazing work in the 20th and 21st century has time and time again reminded the public that self-correction must be addressed with immediacy.

In conjunction with the opening of this exhibition, a major monograph will be premiered; “Judy Chicago: New Views”, which was published by Scala (in partnership with NMWA) with support from Salon 94 and features a number of essays that provide new insights into Judy Chicago’s fearless career. On October 21, the artist will be in conversation with Sarah Thornton at The Cooper Union at The Great Hall to mark this occasion. An image from Picturing Extinction will also be included in Luma Foundation’s IT’S URGENT!, a billboard art show organized by Hans Ulrich Obrist that focuses on politically urgent subjects. The billboards will be on display from August 31 to November 10, 2019 at Luma Westbau in Zurich, Switzerland. Concurrently Chicago’s The End: A Meditation on Death and Extinction, at National Museum of Women in the Arts—on view through January 20, 2020—hosts over 40 works of painted porcelain, kiln-fired glass, and bronze.

For exhibition preview or more information please call (212) 979 0001 or email allison@salon94.com. For all press inquiries, please contact Sophie Wise at sophie@companyagenda.com or call 212-358-9516.

This exhibition produced in part by Public Hotels, New York.

10% of all proceeds generated from the sale of artworks in Salon 94’s exhibition will go toward Project 0 whose mission is to highlight the urgent need to restore and protect the Mediterranean Sea.