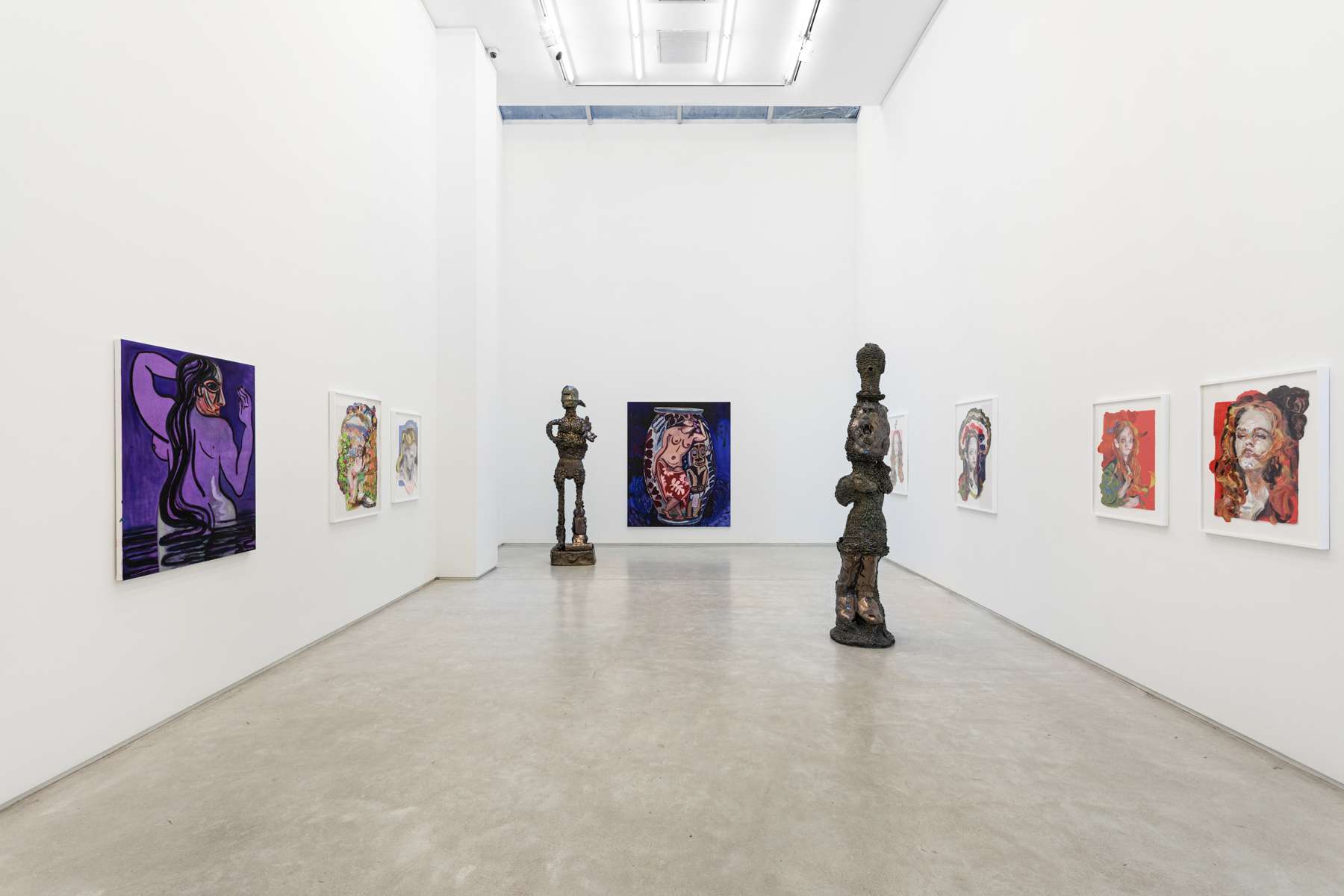 Pushing the boundaries of painting and sculpture, these three artists are revisionists who turn up the volume. Their bold, utterly singular styles reimagine art history, fairy tales, folklore and popular culture. Shared between them is a common subject matter: the female form, rendered in twisting and torquing dynamism, vivid colors and oozing with attitude. In all three bodies of work, raw brushstrokes and meticulous handwork convey a world of women who oscillate between anxiety and autonomy, aggression and vulnerability, kitsch and class. 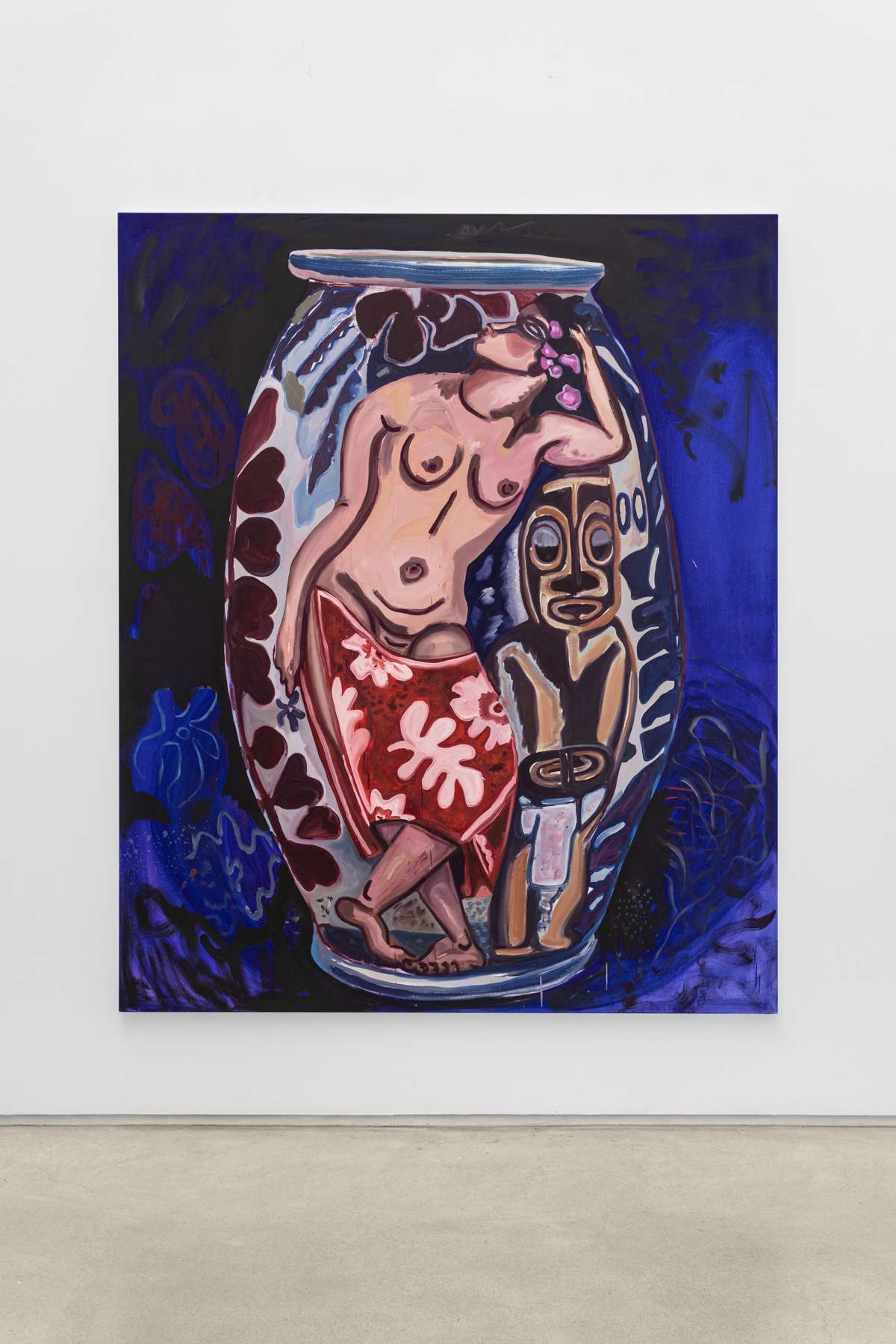 From Greco-Roman marble nudes to the odalisques of Picasso and high modernism, Amy Bessone mines the cultural representation of women throughout history, paying attention to dichotomies such as tragic and comic, abstract and figurative, dark and light. In Bessone’s recent oil on canvas paintings, vibrant color infuses figurative lines to yield mask-like faces, bodies composed of abstracted elements, and uncanny “portraits” of small figurines rendered larger than life. There is a sensuality to the work that alludes to the notion of the fetish, evident in the artist’s handling of the paint and the depicted bodies. Considering the rich history of female figuration, Bessone reinvents popular motifs including the bather, the mother, and the muse with her signature vision of high and low, exalted and kitsch. 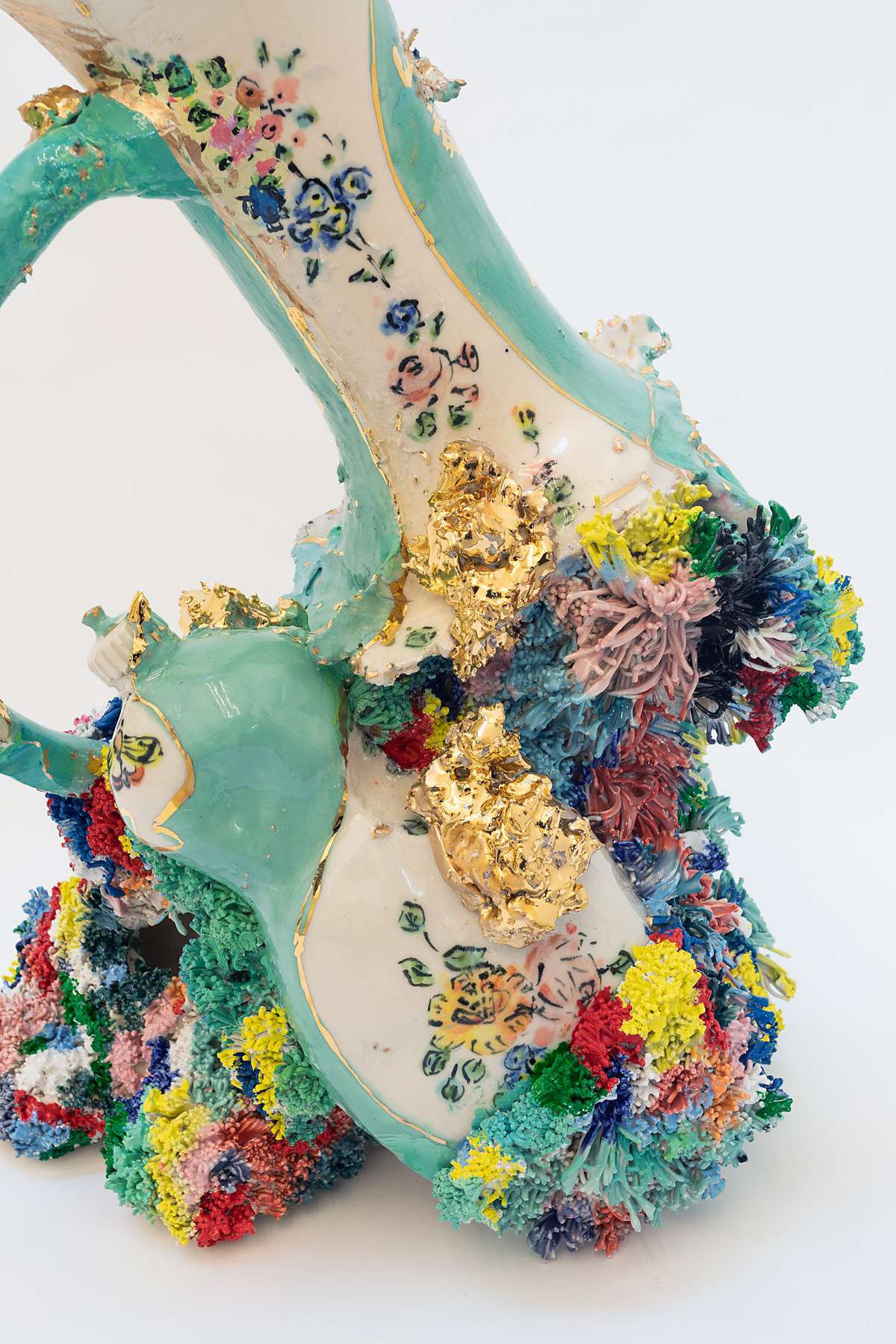 Similarly, Francesca DiMattio’s new porcelain sculptures combine elements of animal and human, masculine and feminine, classical and contemporary, high and low art. Mimicking the Caryatids of ancient Greece, these architectural totems defy easy categorization. While the history of ceramics remains her starting point, DiMattio’s sources range from second century BC bronze memorials to everyday utilitarian forms such as a pillow or suitcase. As with her paintings, DiMattio transposes traditional techniques from the history of craft such as basket weaving, wedding dress appliqué, and even shell art into intricate porcelain ropes and pebble-like jewels or other encrusted surfaces. In using traditionally “female” references and techniques, DiMattio rebrands how we see the feminine. Elements typically taken for adornment or decoration are translated into large imposing forms that embody strength. Contemporary kitsch similarly infiltrates her work and DiMattio enthusiastically embraces excess in order to push discordant visual connections and disrupt preconceived histories. 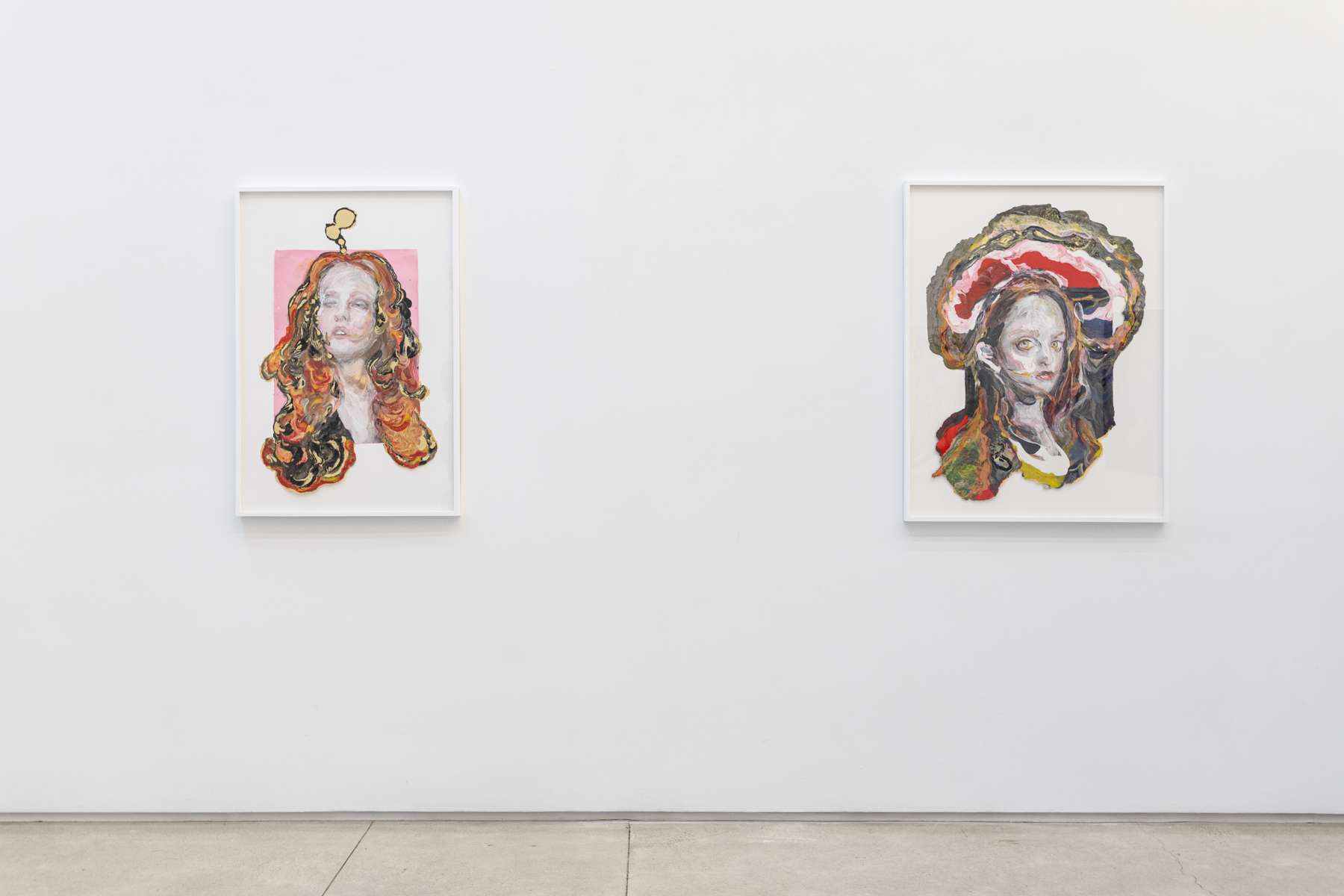 For Natalie Frank, drawing and painting are both intimate and expansive. She began her professional career as a figurative painter: large-scale works on canvas portrayed domestic scenes and power dynamics, particularly within sexuality, gender identity, history and religion. She continues to hone a unique practice focusing on feminist tales and fables using vibrantly charged figuration to reveal powerful voices of resistance in iconic literary works. In paper pulp painting, Frank fuses her layered approach to drawing and its intense color with her paintings’ gestural and rendered hand. By pouring, moving, dividing, or combining viscous hand-pigmented paper pulp with brushes, spoons, and sticks, and using it as paint, Frank sculpts intimate portraits of anxious females, some eating their hair, others closing their eyes in anguish or peace. Frank’s approach is painterly, working against the natural tendency of paper pulp to settle, she agitates these surfaces with bravura brushwork. These paper pulp paintings were made at Dieu Donné through their illustrious Sponsorship Program.

Amy Bessone (b. 1970, New York) completed her studies at De Ateliers, The Netherlands in 1995 and since then has mounted numerous exhibitions including solo shows at Veneklasen Werner, Berlin (2012), Praz-Delavallade, Paris (2011), David Kordansky Gallery, Los Angeles (2007 and 2010), among others. Her work is included in the collections of the Museum of Contemporary Art, Los Angeles, Frac Bretagne, Chateaugiron, France, The Saatchi Collection, London, Rennie Collection, Vancouver, Canada, and the Rubell Family Collection, Miami.

Francesca DiMattio (b. 1981) lives and works in New York. Recent solo exhibitions include Boucherouite at Salon 94 (2018), Francesca DiMattio: Housewares, at the Blaffer Art Museum, Houston (2014) and Vertical Arrangements, at the Zabludowicz Collection, London (2013). Her work is in the permanent collections of The Perez Art Museum, Miami; The Frances Young Teaching Museum and Art Gallery at Skidmore College, Saratoga Springs, NY; The Ruth and Elmer Wellin Museum, Hamilton College, Clinton, NY; The Saatchi Gallery, London and The Zabludowicz Collection, London.

Natalie Frank (b. 1980 Austin, Texas) lives and works in Brooklyn. Recent solo exhibitions include O, at Half Gallery, New York (2018), and Dancers and Dominas at the Rhona Hoffman Gallery in Chicago (2015). She is a Fulbright Scholar and her work is in the permanent collection of the Whitney Museum of Art, New York, the Yale University Art Museum, New Haven, the Art Institute of Chicago, Chicago, and the Burger Collection, Hong Kong. This past March she completed a large-scale commission for Grimm Tales, a full-length performance at Ballet Austin. Her forthcoming book, The Island of Happiness: Fairy Tales of Madame d’Aulnoy, for which she also wrote the preface, will be published by Princeton University Press in 2020. She has two other publications currently available at Salon 94: The Story of O, an erotic novel (Lucia/Marquad, Seattle, 2017), and Tales of the Brothers Grimm: Drawings by Natalie Frank (Damiani, 2015).