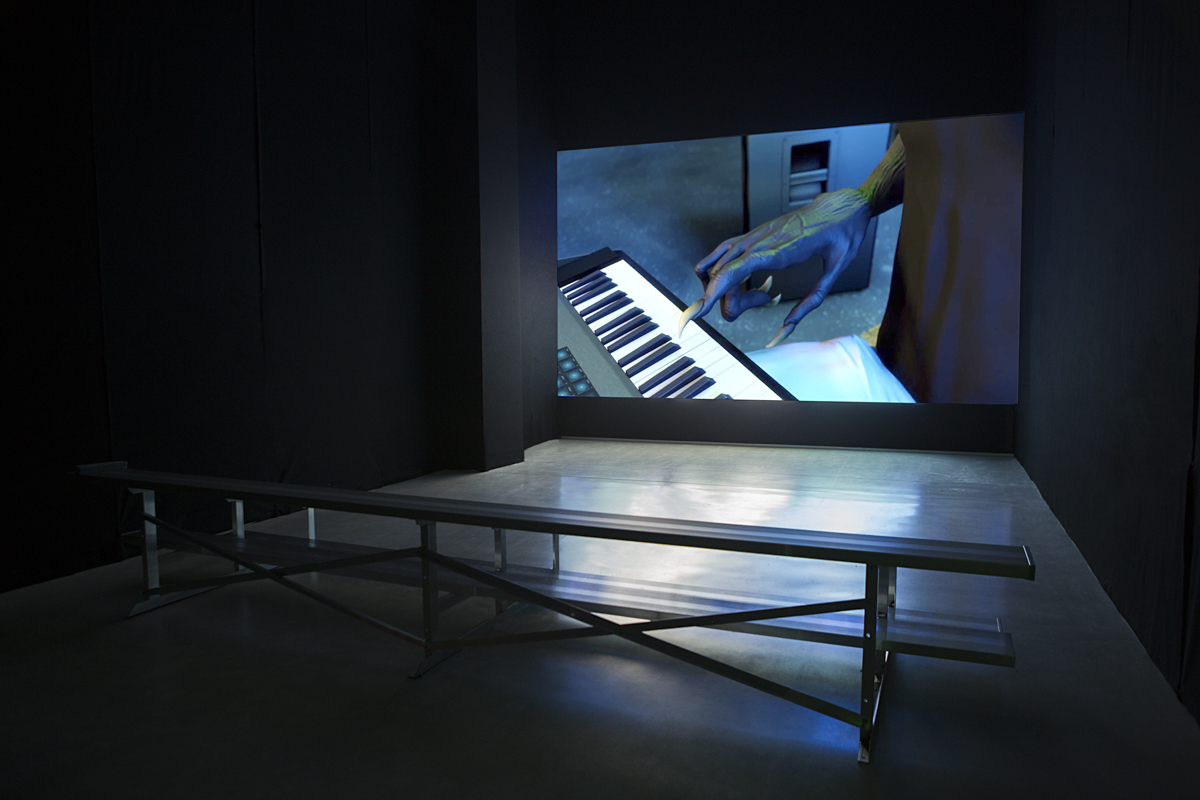 ​Takeshi Murata (American, b. 1974) works with CGI (computer generated imaging) and digital animation in a variety of mediums. His innovative and evolving processes range from intricate hand-drawn animations, to installations accenting the defects and broken codes of film, advertising and pop culture. Known for a sophisticated, psychedelic style of image-making with deep, dream-like spaces and a digital color palette, he stands as one of the top artists using computer software as his medium.

OM Rider (2013-14, 11 minutes 39 seconds) is the latest video by Murata, with soundtrack by Robert Beatty. The video tells a suspenseful story of a murderous encounter between a punk werewolf and a dapper old man. Set in a cavernous digital environment, the space of the action is dark and mysterious. The soundtrack pulses and accelerates with hypnotic, electronic rhythms. Suspense drives the narrative forward.

The wolf rides a scooter through dark, underwater-like environments – he is submerged in a simulated world. He wears cut-off shorts, smokes a pipe, vomits green goop, plays the keyboard and the trumpet. The man sits in a suit and tie at an oversize table. He peels and slices a banana with a pocket knife and climbs an endless spiral staircase to nowhere or infinity, or both. He also takes a few breaks along the way to catch his breath.

Using symbolism, humor, and horror movie tropes, Murata flirts with the comically absurd and appeals to the enigmatic symbolism and surrealist impulses of filmmakers like David Lynch and Alejandro Jodorowsky. OM Rider can be seen as an homage to cult thrillers like Altered States and John Carpenter’s The Thing, as well as Hollywood monster movies like King Kong, Jaws, An American Werewolf in London, and many more. The video also shares a relationship to the manipulated video game environments of Cory Arcangel and Harun Farocki. OM Rider mingles the maximum psychedelic effect of Paul Sharits, with the playful deconstructions of Jack Goldstein, and the tragic, often silent toy characters of Laurie Simmons.

OM Rider – like Murata’s last animated short I, Popeye – incorporates tragic humor alongside nods to Hollywood cinema in the telling of a story where the central character dies, one tragically and one murderously. Like his practice at large, Murata’s CGI realism incorporates both figurative elements and abstract fields, patterns, and breakdowns.

The exhibition will also include Yellow Jogger, 2014. This dream object is another hyperreal, hybrid character out of a cartoon, a game avatar or a lucid dream. The work collapses simulated and real space, with a drawn wall sculpture that functions as a frame. The animated image depicts a yellow smile face sphere trapped in a clear cube – a pop culture nod to the cubist-like breakdown of a face into line and color. The artist’s frame cuts through the center of the composition, deconstructing the simulated space and underscoring its flatness in reality. The frame shape comes from a digital line drawing, then fabricated in unibody aluminum and seamlessly painted in gradient color. The handcrafted work pushes forward the artist’s ongoing exploration of new media and technologies.

Salon 94 Bowery is located at 243 Bowery between Stanton and Rivington Streets. The gallery is open Tuesday through Saturday 11am – 6 pm, and Sunday 1 – 6 pm. For more information please call the gallery at (212) 979 0001 or email: [email protected]

A selection of the artist’s videos will play on Salon 94’s outdoor Video Wall through the duration of the exhibition. Videos include: