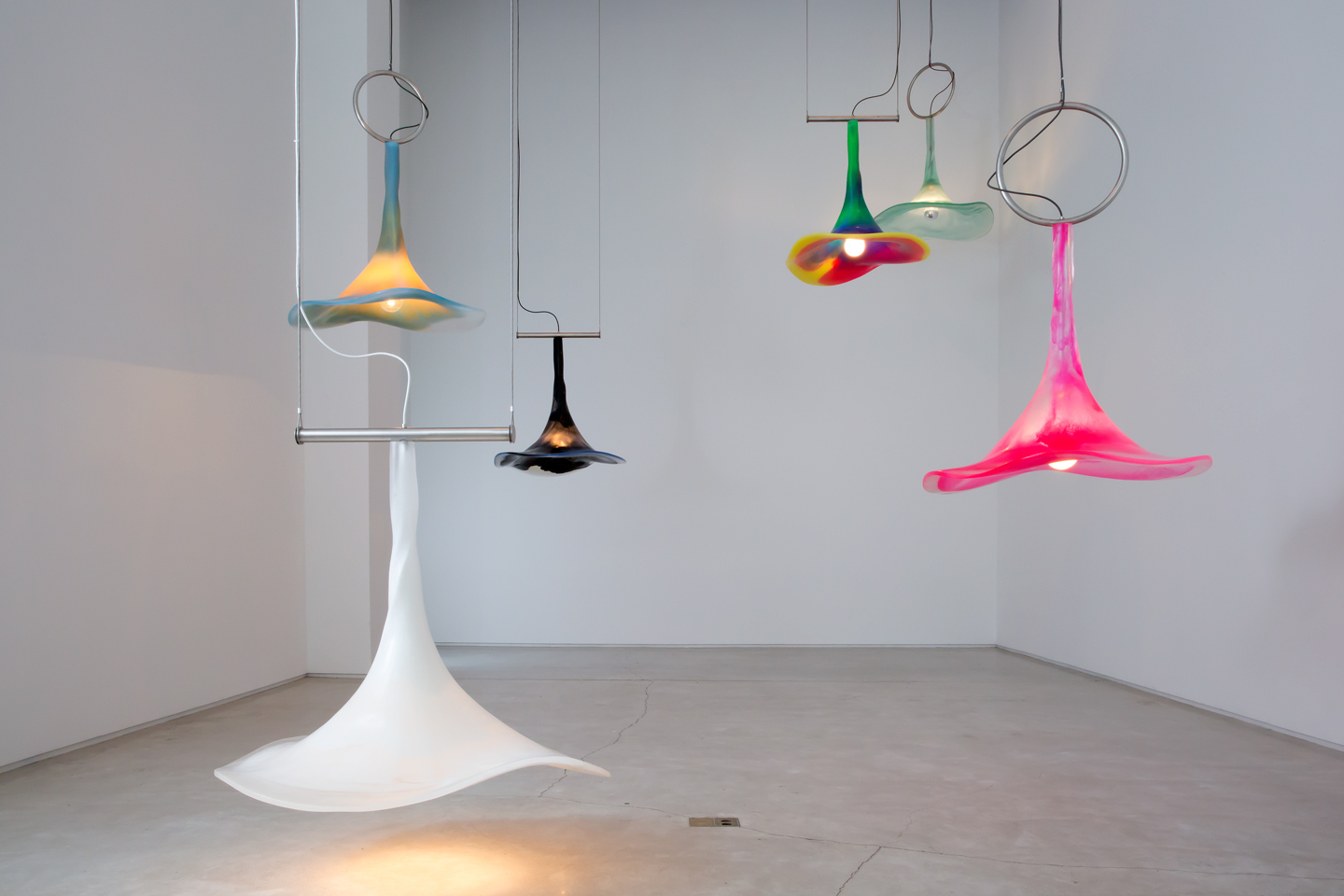 Aurora borealis is inspiration for a celestial landscape of brilliantly hued, luminous chandeliers.

According to ancient Finnish folklore, a magical arctic fox roamed the mountains at night. Whenever its tail brushed the ground, great sprays of snow would swirl skyward and turn into flashes of blazing light. The Lapps, or the Saami people, believed that the northern lights that flickered above were the spirits of recently departed souls, while in Norway the flickering lights represented ghosts of old women dancing in the sky. Aurora borealis—the lights of the northern hemisphere - occurs when electrically charged particles from the sun enter the earth's atmosphere, flowing past the earth’s magnetosphere and causing a magnificent display of moving colored light. In Paula Hayes’ first exhibition at Salon 94 Bowery, Morning Glory, this natural phenomenon is inspiration for a celestial landscape of brilliantly hued, luminous chandeliers. The living plants and gardens that have defined Hayes’ work for two decades have been replaced with suspended sculptures.

In Morning Glory, Paula Hayes shows eight hand-cast acrylic light sculptures - unfurling flowers on vines. Trapeze art is a second inspiration for the work, where each fixture hangs at varying heights from hoops and bars, like aerialists caught in flight. Works are paired together as if they are performing in unison. The colors of Aurora borealis permeate them in deep chromatic variations, emitting a glowing spectrum across the room. Nature is still Hayes’ subject, but it is alluded to in the form and colors of the works, and in the heightened sensory environment. Nature and art are Hayes’ catalysts, which allow the viewer to enter an altered state, much like the psychotropic seeds of the genera Convolvulaceae (morning glory), from which Hayes’ garden of light gets its name.

Paula Hayes is known for her meticulously crafted works which bridge the worlds of art and design. Working with local artisans, engineers and cutting edge design technology, she creates sculptures that are functional—a bird bath, a tree planter, a light fixture. Each work reveals beautiful detailing and materials, and is typically hand-made. Concept, form and function are in perfect balance. Hayes’ is also known for her environments, both micro and macro, that demand participation from the viewer. In the case of her living sculptures - hand-blown glass terrariums filled with mini-ecosystems of plant life and minerals – owners are required to care for them. She asks her audience to look at her materials not just formally, but also emotionally (and even spiritually). The relationship between the viewer, nature and her mediated environment are integral to the experience – and narrative – of the work. In her space we become her tumblers and trapeze artists, without a net, gazing upwards.