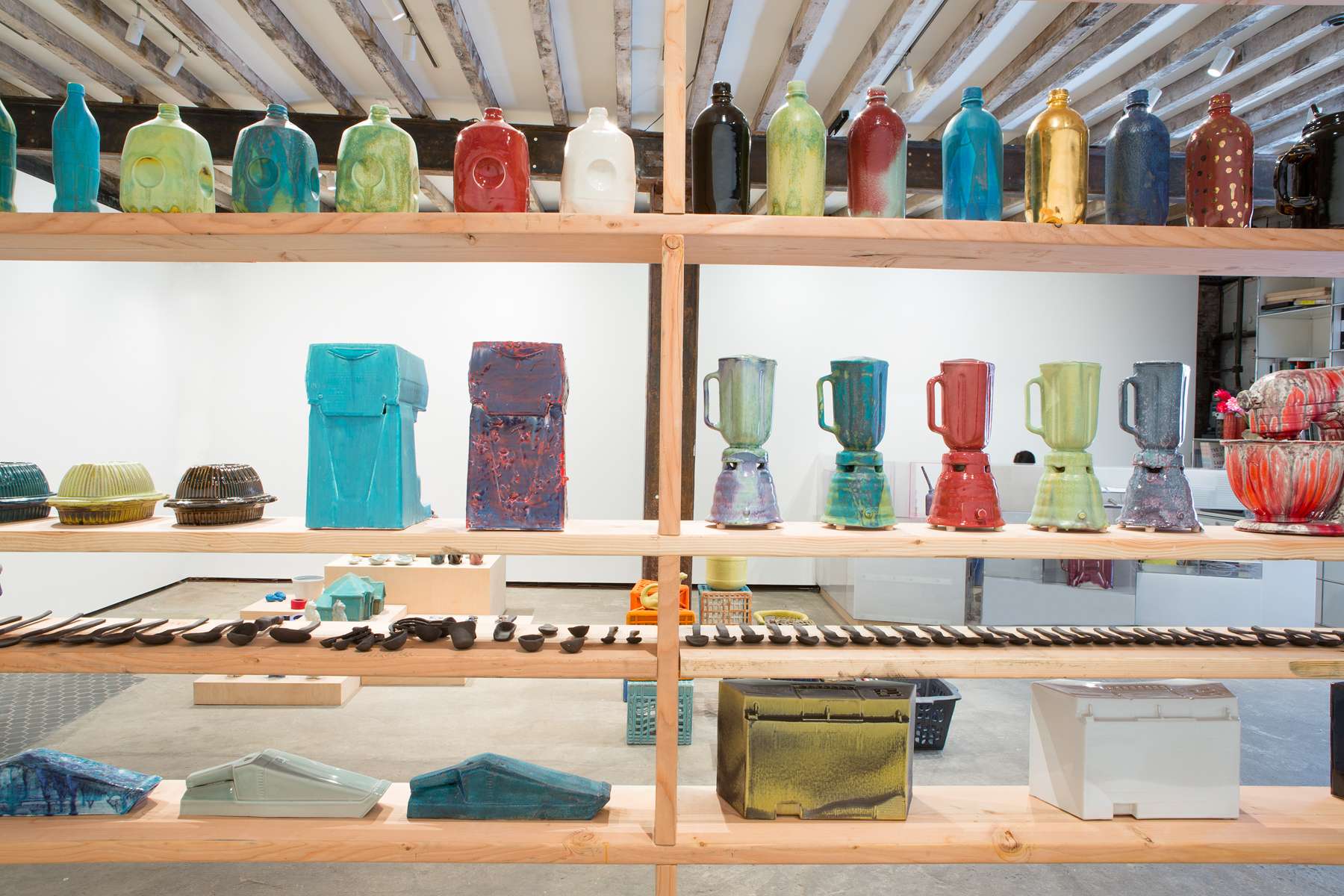 Using a set-up in-between storage and shrine, the artist constructs a body of work that builds on his previous Bucketry pieces where he remade plastic vessels in clay.

​Salon 94 is pleased to present Hereafter, curated by Fabienne Stephan.

For his first New York solo exhibition, Los-Angeles based artist Matthias Merkel Hess presents a diverse collection of ceramic and paper objects entitled Hereafter. Using a set-up in-between storage and shrine, the artist constructs a body of work that builds on his previous Bucketry pieces where he remade plastic vessels in clay. Here he adds household appliances, toys, and food items to his repertoire of containers, that range from an Original Mr. Coffee, vintage DustBuster, KitchenAid Stand Mixer, SuperSoaker SS-50, Mr. Potato Head, a Froggy Toddler Potty and a rubber chicken to stick deodorant, duct tape and every spoon in his apartment rendered in ceramic.

Riffing on the Readymade and ideas about permanence and immortality (the artist notes that 2013 is the 100 year anniversary of the Readymade), Merkel Hess casts the cheap plastic and cardboard objects of everyday life into seductive grave goods mythically buried with bodies for “use” in the afterlife. The accumulated sculptures come from items that are both disposable and downmarket (plastic buckets, crates, and coolers) as well as dated memory objects (Oster Blender, Mr. Potato Head) that include toys, tools and electronics. For some pieces, he hand-sculpts the surface details and sometimes the silhouette, re-shaping and re-inventing the forms. For the mats—works that have a namesake play on the artist’s signature—the soft single entities are broken down into multiple ceramic parts with abstract surface pattern, hung together on the wall like both tiles and painting. The individual works have a hippie kind of humor, resonating as a result of the variations in scale from their dime-store referents, subtle shape differentiation and word plays and their unlikely colors, shiny, drippy and psychedelic.

The installation foregrounds the empty vessel and the closed container, playing with the historical use-value inherent to the medium, and considering the relationship of vessels, art objects and consumption. There is a striking and witty relationship made here between 19th century American stoneware used for storage—now obsolete—and the contemporary counterpart to the domestic and utilitarian receptacle that is mass-produced and disposable. There is also a playful and meaningful relationship of “empty vessels” to grave monuments, cenotaphs, and other memorial sculptures meant to pay tribute to a body that is not contained inside. Seen as a whole, the visual quality of this collection reflects the personal and commemorative nature of possessions accumulated over time, registering individual eccentricities and impulses as well as points of banality and absence.

Merkel Hess’ work brings to mind the sculptural pop products of Claes Oldenburg’s The Store, the surrealist gestures of René Magritte, the collection displays of Mike Kelley as well as Kelley’s found toys, the commercial merchandise of Takashi Murakami, the cartoonish and humorous abstractions of Philip Guston, and the brightly colored non-functional and over-sized vessels of Betty Woodman.

This is Merkel Hess’ first solo show at Salon 94. The artist received his MFA from UCLA in 2010, and since then his work has been included in the Venice Beach Biennial 2012 curated by Ali Subotnik, the group presentation Keramic at Pacific Design Center in Los Angeles, Paul Clay at Salon 94 and a three-person show at the Nerman Museum of Contemporary Art in Overland Park, Kansas last year. His work was the subject of the one person show Bucketry at ACME. Los Angeles in 2011, and he currently has a simultaneous solo show at ACME. Los Angeles entitled Anvils, on view through July 6th.