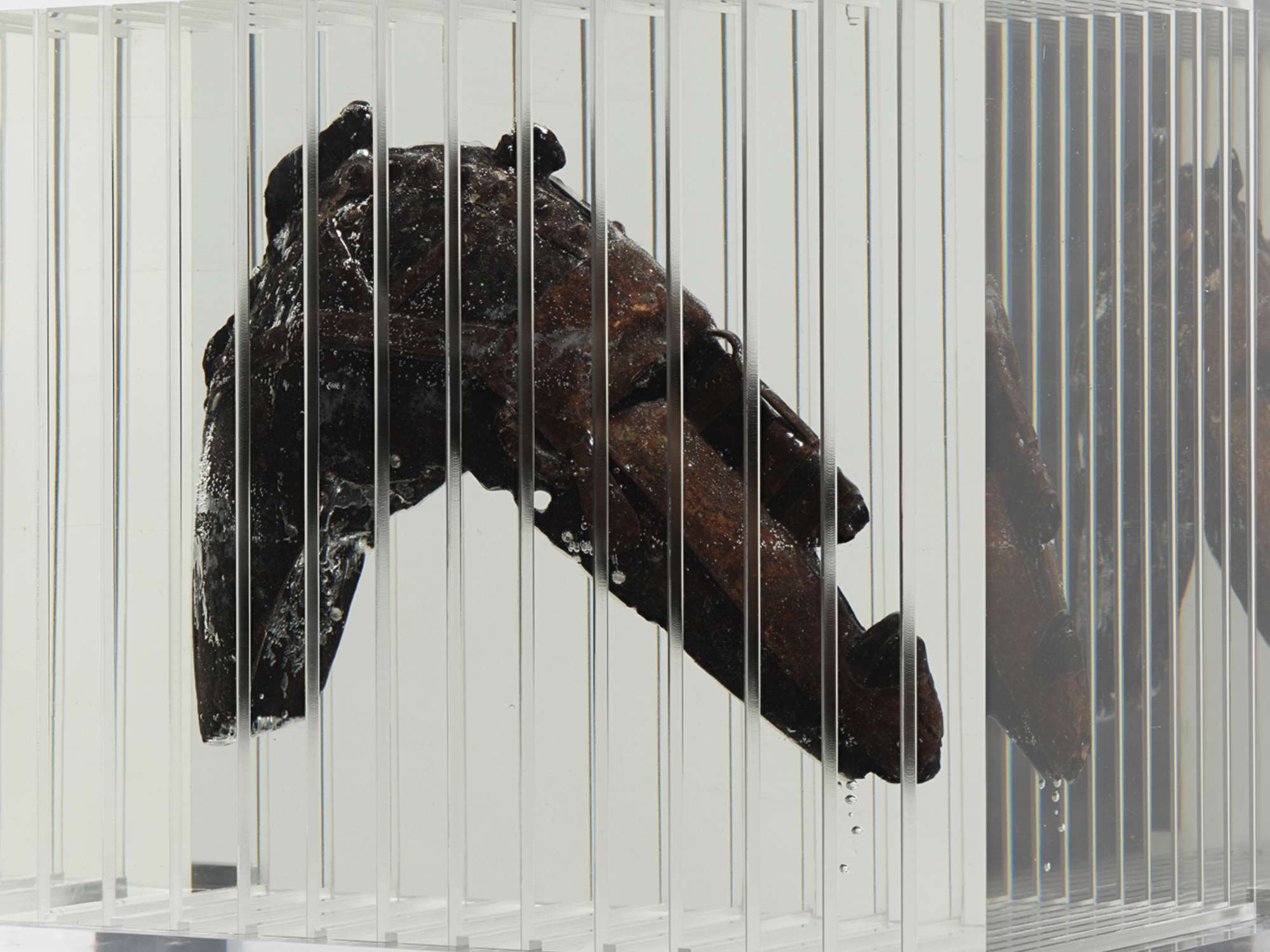 "I like to play with the idea of the archive, with longevity and perpetuity. My resin encapsulations take wooden sculptures targeting the tourist trade­­—in other words, semi-disposable momentos—and give them a lasting platform, a stage to mean more, like a dragonfly caught in amber." 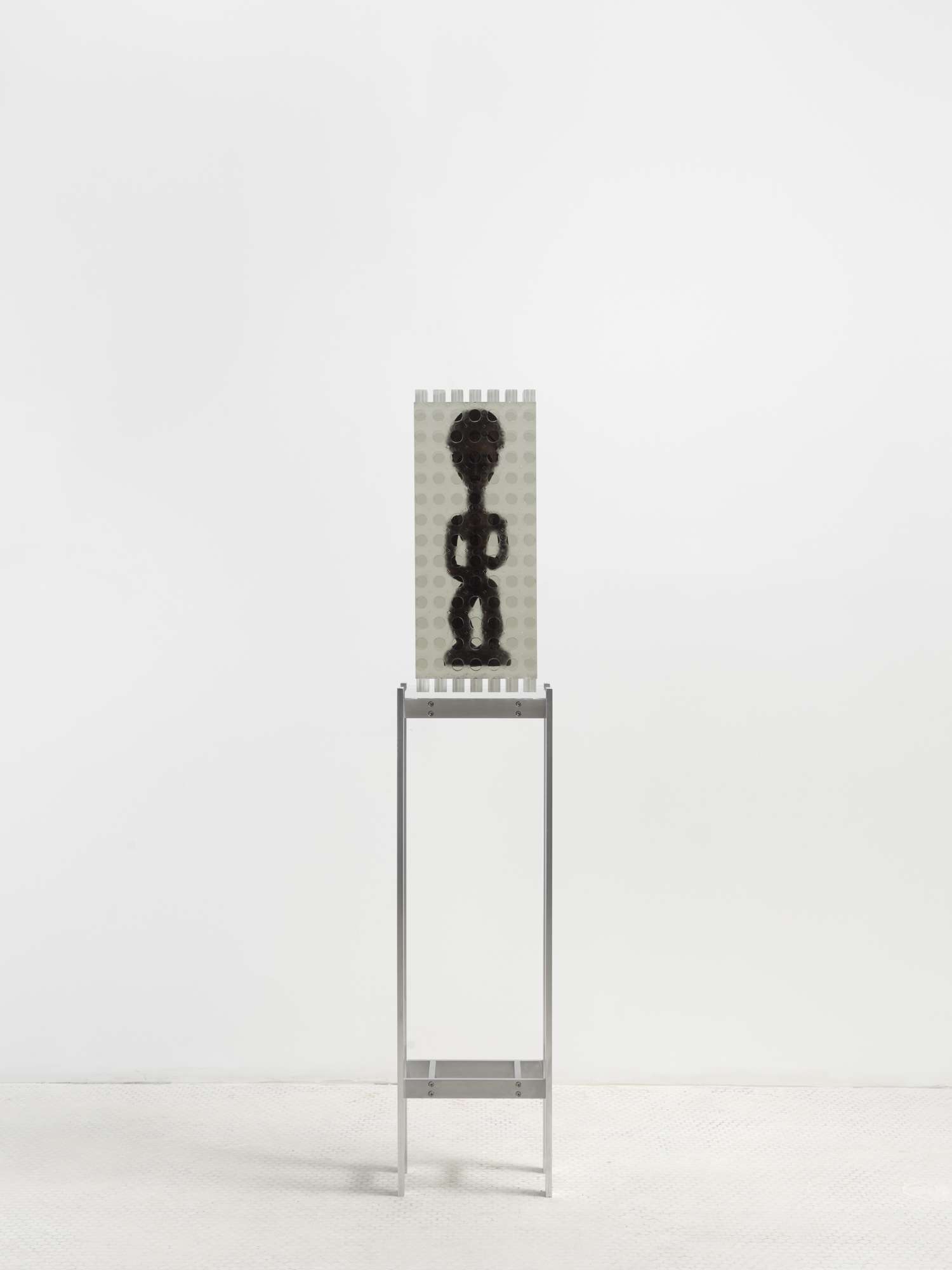 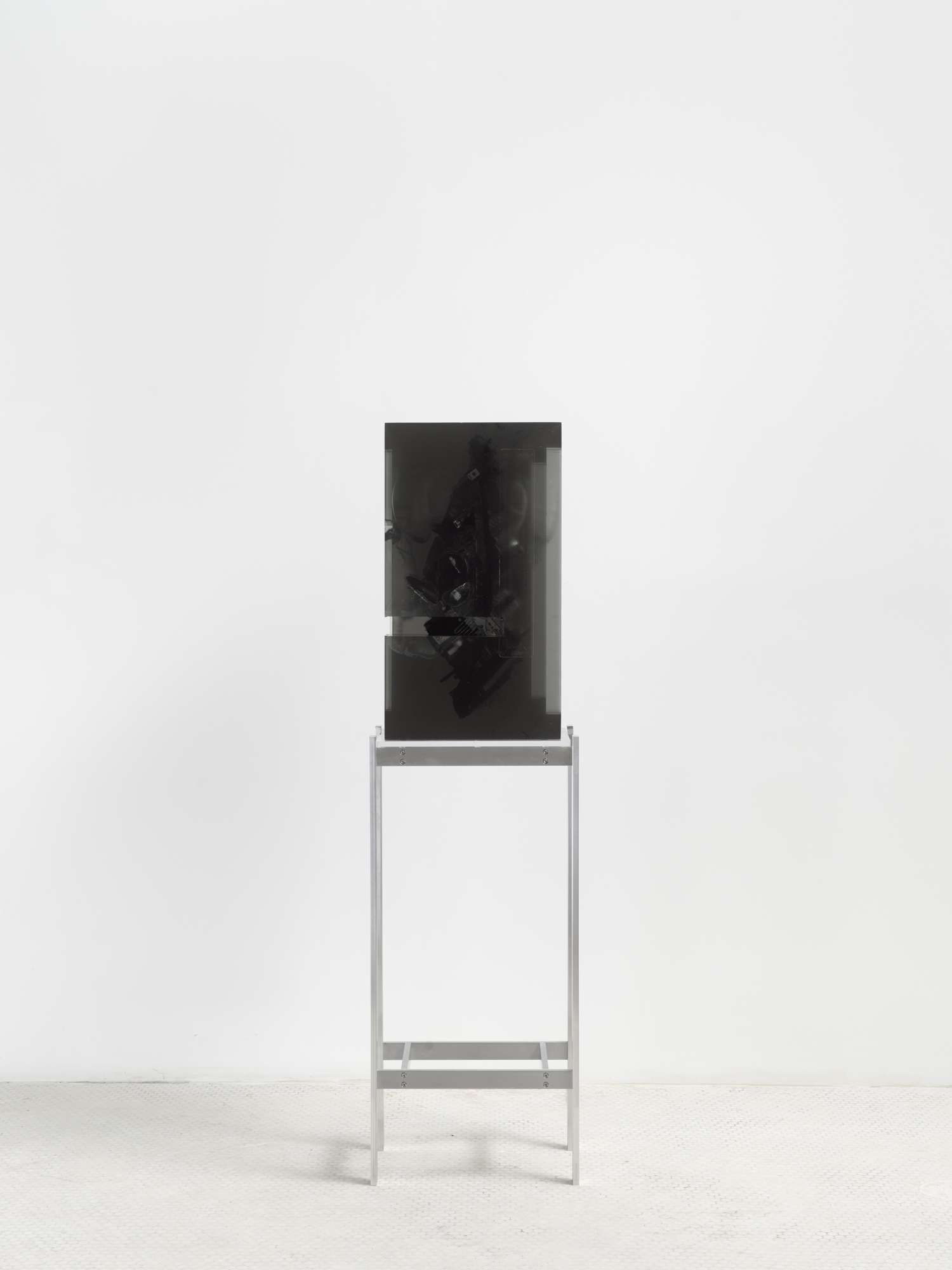 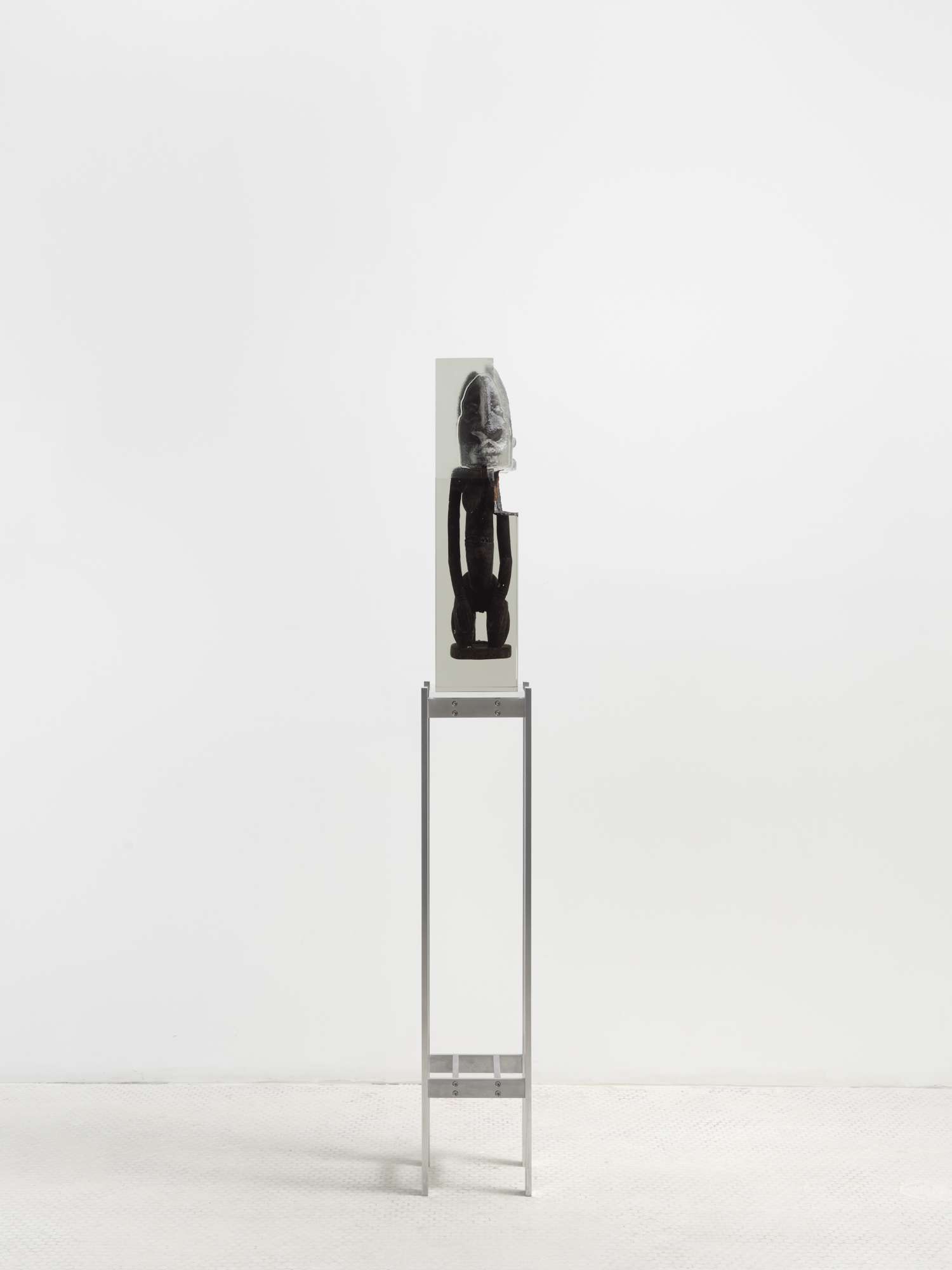 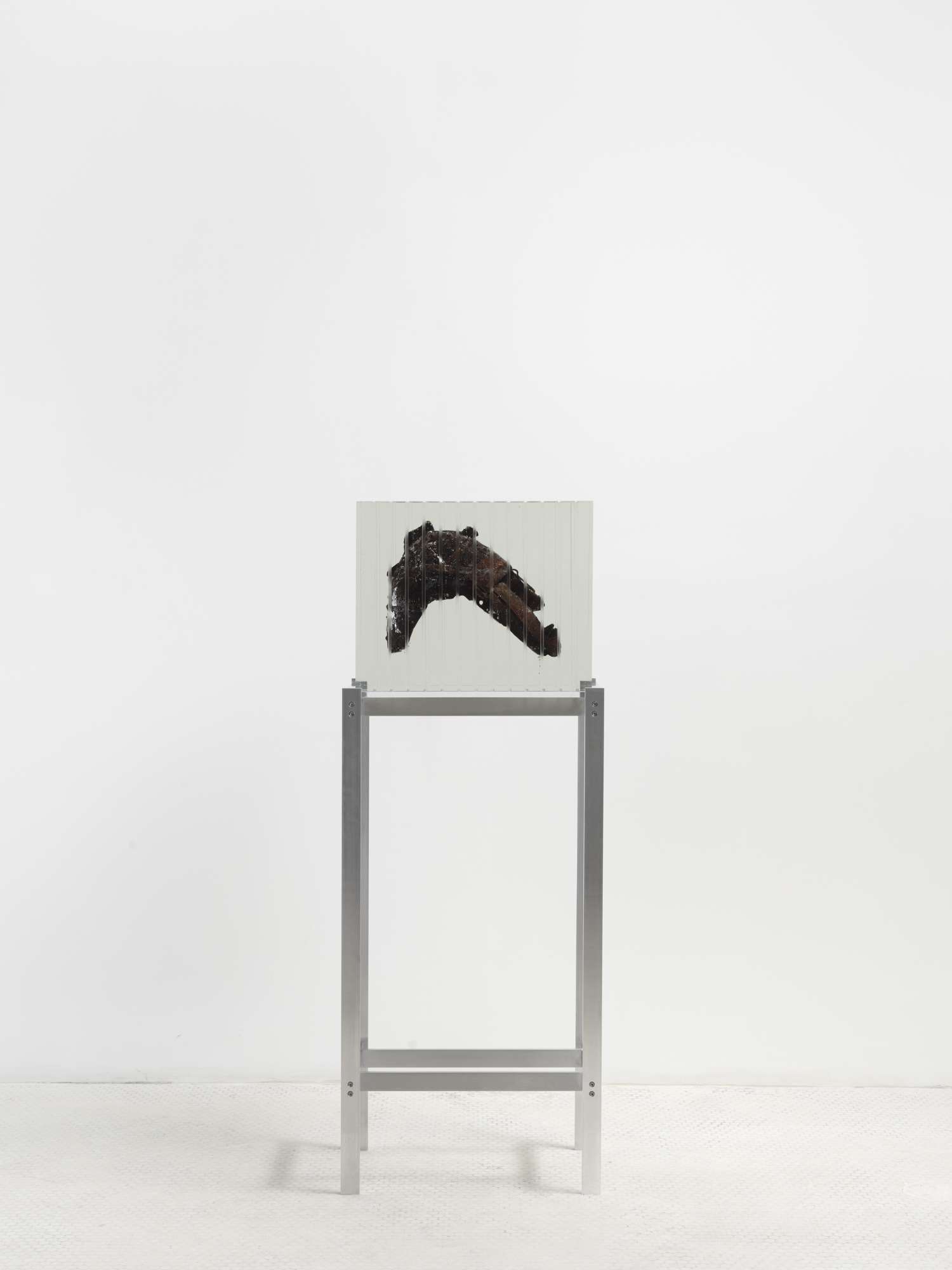 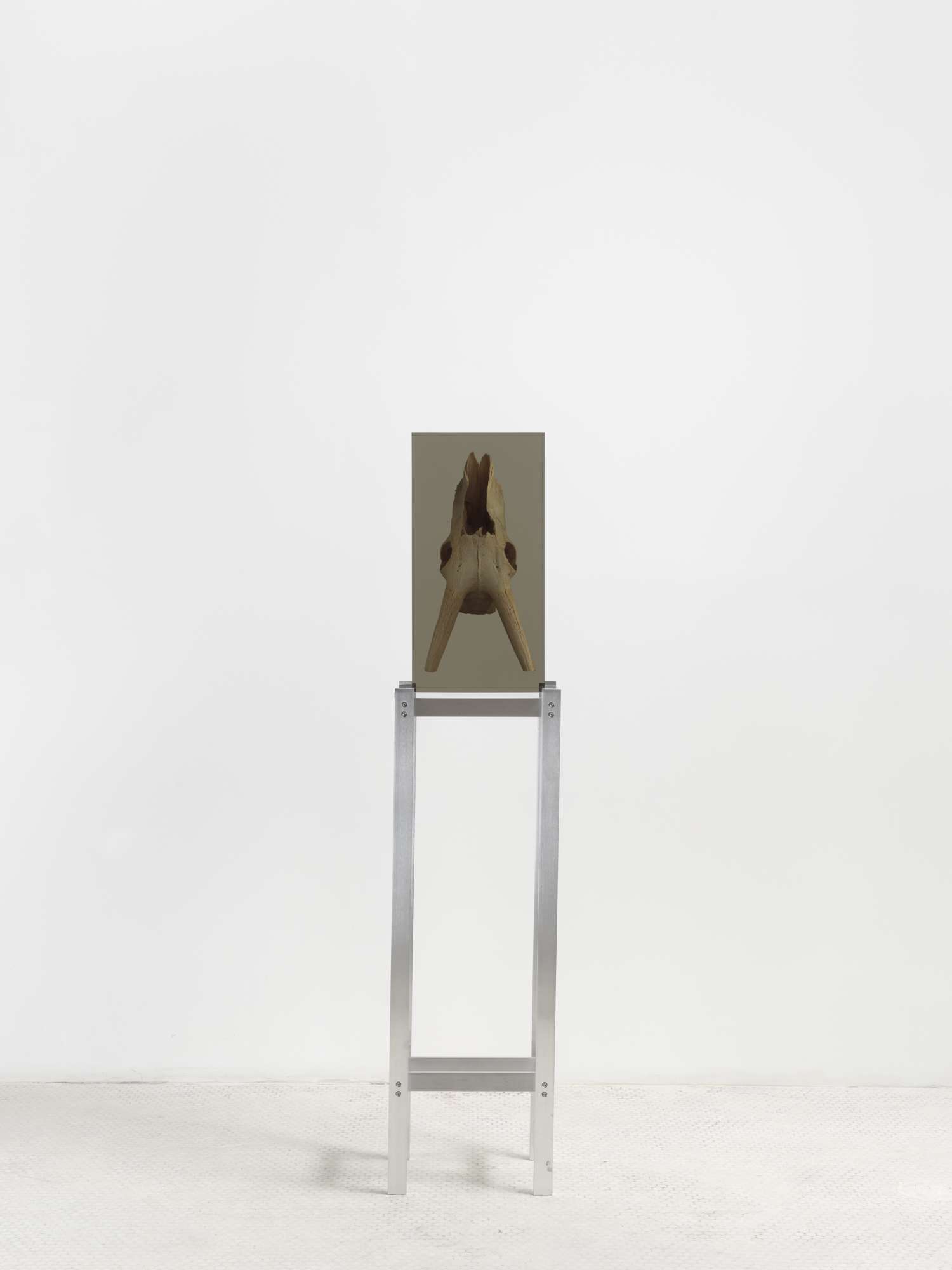 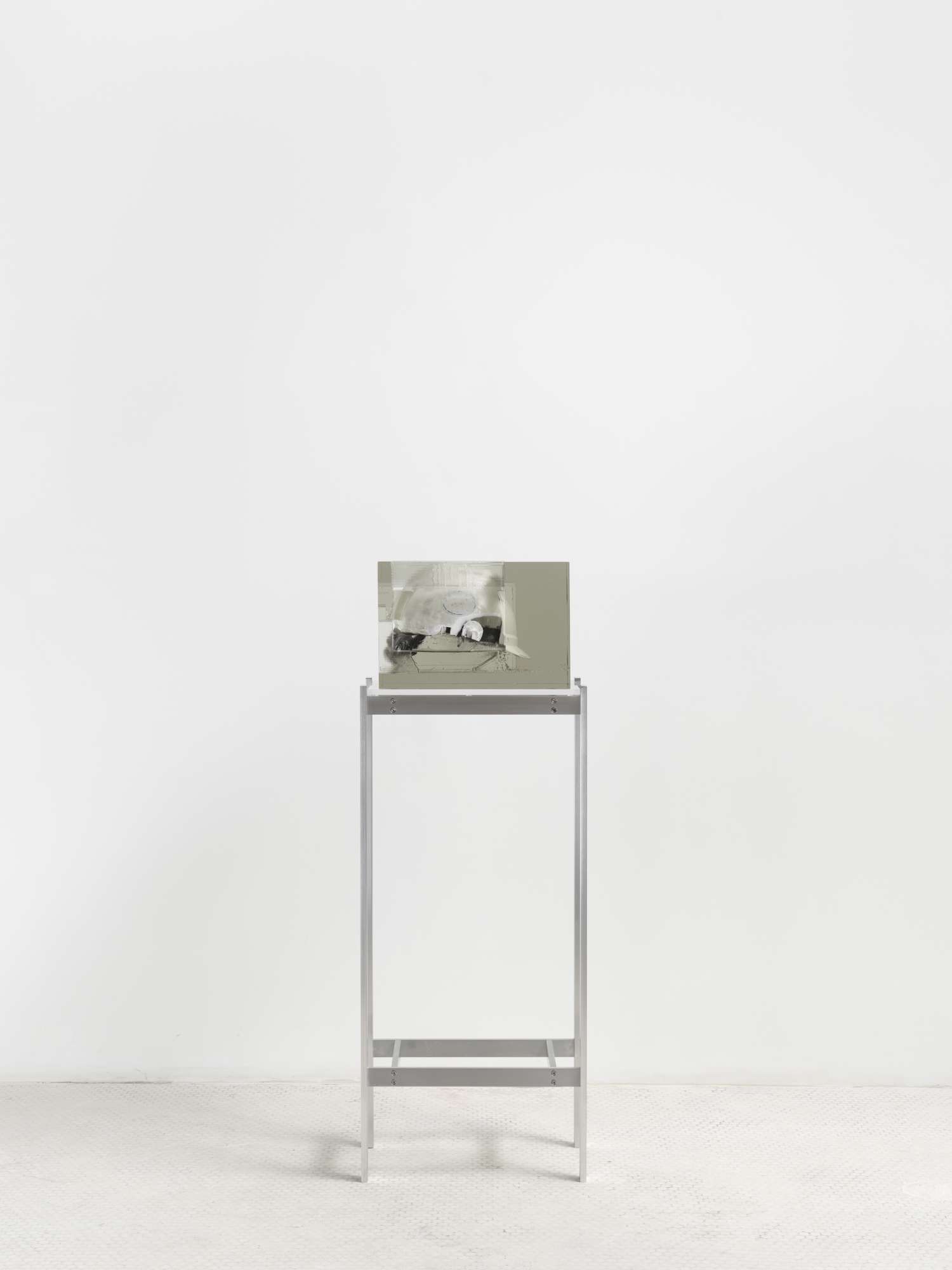 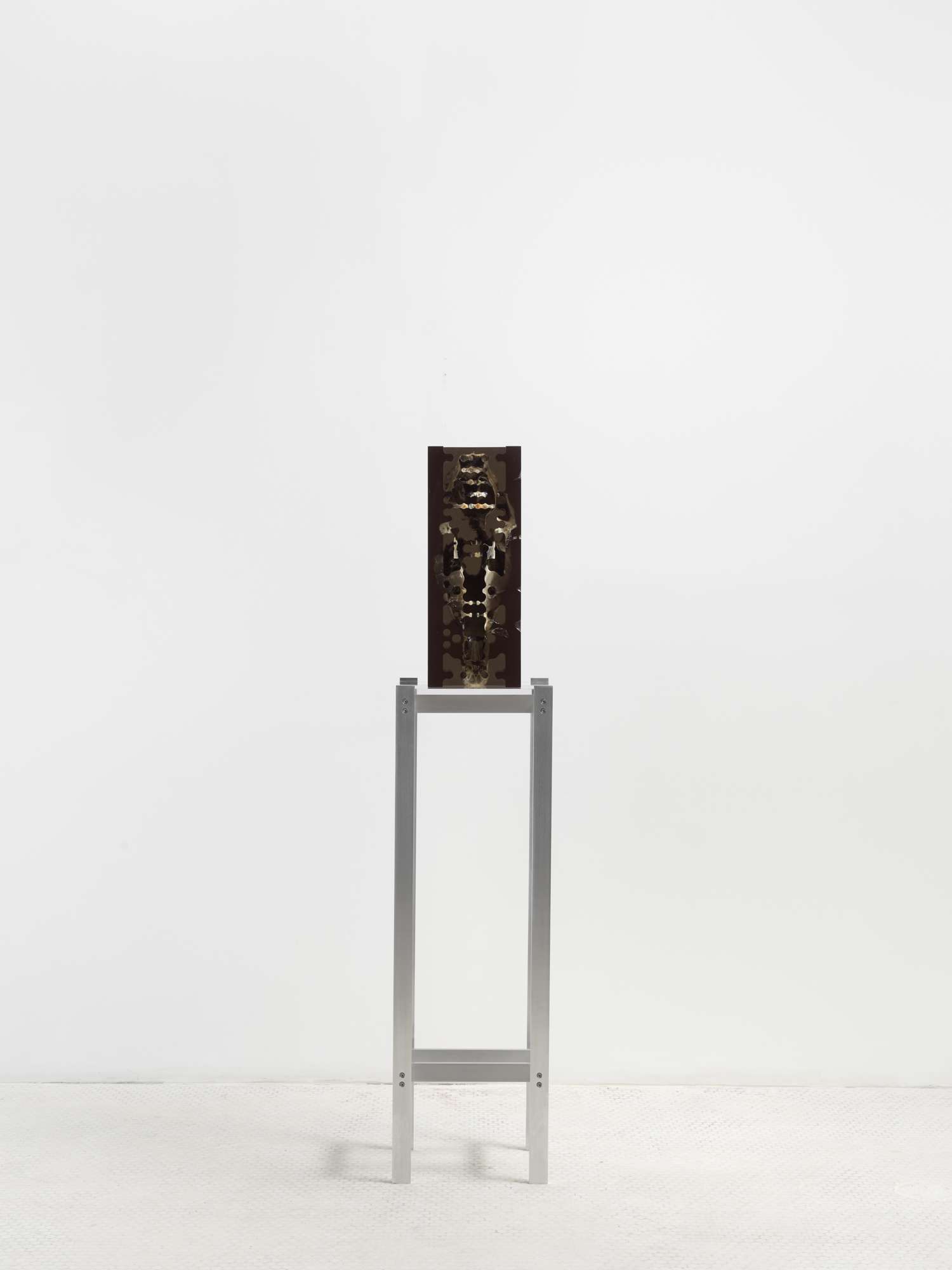 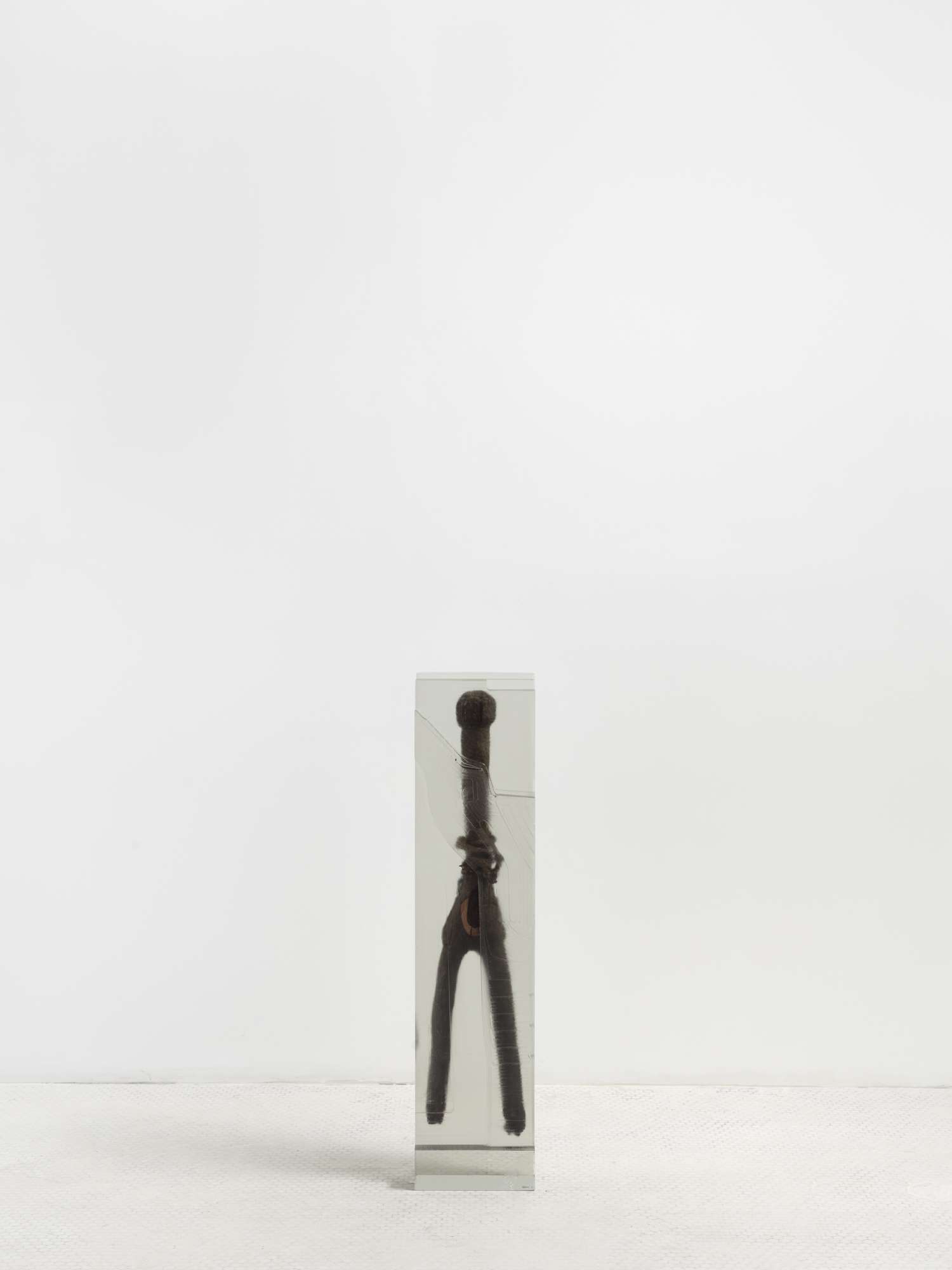 Imagine an America fossilized in resin, in red and white and black and blue.

The works in Ambidex, Matthew Angelo Harrison’s first solo exhibition at Salon 94, build on the resin sculptures that Harrison has been producing in recent years and featured in Proto, a solo exhibition at Kunsthalle Basel. In Ambidex, each polished resin block contains an artifact or sculpture that is emblematic of the United States in some way. Elongated, ectomorphic figurines share space with masks and animal bones. All of these suggest a vaguely African provenance. In practice, they are drawn from the Bambara, Dogon, Makonde, and Senufo cultures and North American animals like the caribou, but like the descendants of enslaved peoples in America, whose ancestors were taken on the same transnational circuits that these objects now traverse, the specificity of their origins has been erased.

Of course, some ghosts loom larger than others, and it's hard not to see an invocation of the Black Atlantis or even Drexciya in the figures encased in resin as if trapped underwater. But rather than creating a temporal disjunction, the specters of the past segue smoothly into those of the present-day in a kind of visceral hauntology that unites multivarious legacies of the Middle Passage to underscore the ever-contingent relationships between identity, race, and economics in the United States.

In recent years, the repatriation of looted colonial objects has become an increasingly prominent concern for many, particularly in Europe with collections holding Benin Bronzes. For Harrison, however, their origins are “besides the point because these channels were considered clean at some point.” Similarly uninteresting is the fetish of authenticity that is usually baked into the transactions around these objects. Many are acquired by dealers who specialize in these particular objects; Others may or may not be entirely fake. More pertinent to Harrison is the environment and circulation of the objects and the heterotopic spaces in which they might be encountered. One sculpture in the exhibition features ephemera from his mother’s archive of United Auto Workers paraphernalia (the union is currently embroiled in one of the biggest corruption scandals in labor history.)

The works rest upon metallic armatures that recall both Belgian industrial design and that country’s particularly gruesome colonial practices. Shown together, the contents of the resin blocks collapse the distance between both the African continent and the Midwest—there’s nothing more American than automobile factories—and the economic systems of plantation capitalism and Fordism.

Harrison cuts into each resin work using a CNC router. His incisions aren’t pre-planned; rather, Harrison tries to respond to the energy of the sculpture in some way, and have the cuts reflect how the piece speaks to him. The cuts reflect a machine-reminiscent geometry that slips between minimalism and the visual vocabulary of manufacturing: parts, injection molds, and industrial technology. The works are all sculptural, but we might understand them as architectural drawings or even blueprints, following Gordon Matta-Clark’s statement that “A simple cut or series of cuts acts as a powerful drawing device able to redefine spatial situations and structural components.” But these works go further, linking not only disparate geographies but—through the cut—the confluence of competing ideologies and value systems.

In Ambidex, Harrison addresses the history of the United States from the more localized scale of his personal history with an approach he describes as simultaneously engaging and mediating. The artist attacks his own set of inherited ideologies, not renouncing identity in any way but rather establishing a dual perspective. “I try to be as authentic as possible, to capture the moment around me,” he explains.

“The history of manufacturing in America is one of illusion, and the concept is breaking because of reality,” Harrison says, asking that “If you do the same work, are you the same, are you equivalent?” He draws links between the ideologies of laissez-faire economics, with its emphasis on and promoting extended growth, and the commercialization of racial identity. Even as unions are nominally about collective action, an individual’s identity as a teamster or just a hard worker is “really tied to American identity long term; everything the US does is tied to labor.” As such, the bootstraps myth of the American dream, where “whatever happens is your fault,” meanwhile, is something so endemic and so pervasive as to have become a metaphor for tech entrepreneurship. And yet—is there anything more un-American than the stoppage of work?

While they share a visual lineage with older resin sculptures, these new works differ in a few ways. The forms on view here will a different emotional palette that describes the tension between Harrison’s optimism and frustration at the obsolescence built into the “ecological landscape of ideas that America has falsified for its convenience,” of both goods and the labor that produces them. For example, a car might be expected to last only ten years instead of thirty. And by extension, the value of the individual worker to both a factory and the state has declined exponentially, even as work conditions become ever more extractive and exploitative.

Harrison’s own fabrication process is unusual in that he builds his own machines and as such, finds himself constantly upgrading them. He has been working on completely automating his artist studio, building machinic arms and collaborative robots, with a focus on amping up the precision of his CNC router. “Precision is literally power: whoever has the precision has the scope,” he explains. He notes that the arc of human technological development is one of ever-increasing precision and resolution, from measuring things with body parts to standardizations of measurements where a ‘hand’ is now always four inches and a ‘foot’ is twelve, through to the ultraprecision of picometers and individual photons. “If those things can be quantified, that’s a ridiculous amount of power to have.”

What comes after power? For Harrison, it’s not even more power but a redistributive justice that recalls Arthur C. Clarke’s famous dictum that any sufficiently advanced technology is indistinguishable from magic. “We can start talking about witches and warlocks again,” he says. “I want to be an alchemist—I am an alchemist, but I gotta learn more spells.”

Matthew Angelo Harrison (b. 1989, Detroit, MI) creates otherworldly sculptures that are in conversation with anthropology, science fiction and industrial design. His work combines found objects made from organic materials such as wooden sculptures from West Africa with synthetic materials like acrylic resin, which he then molds and sculpts with state-of-the-art machinery. The resulting forms investigate the subtle politics of mass production, authenticity, metamorphosis, and what the artist calls “abstract ancestries.”

The first monograph of Harrison’s work has just been published by The MIT Press in conjunction with his exhibitions Proto at Kunsthalle Basel on view until September 26, 2021, and Robota at the MIT List Visual Arts Center in 2022.

Harrison has been awarded grants and fellowships by the Los Angeles County Museum of Art (LACMA), United States Artists, and Kresge Arts. Harrison completed his BFA at the School of the Art Institute of Chicago in 2012. Harrison lives and works in Detroit, MI. Harrison is represented by Jessica Silverman.

Matthew Angelo Harrison: Ambidex is on view by appointment at 3 East 89th Street from September 14 to October 30, 2021.

Please go to salon94.com/visit to schedule your appointment.

For press inquiries, please contact Michelle Than at michelle@companyagenda.com.