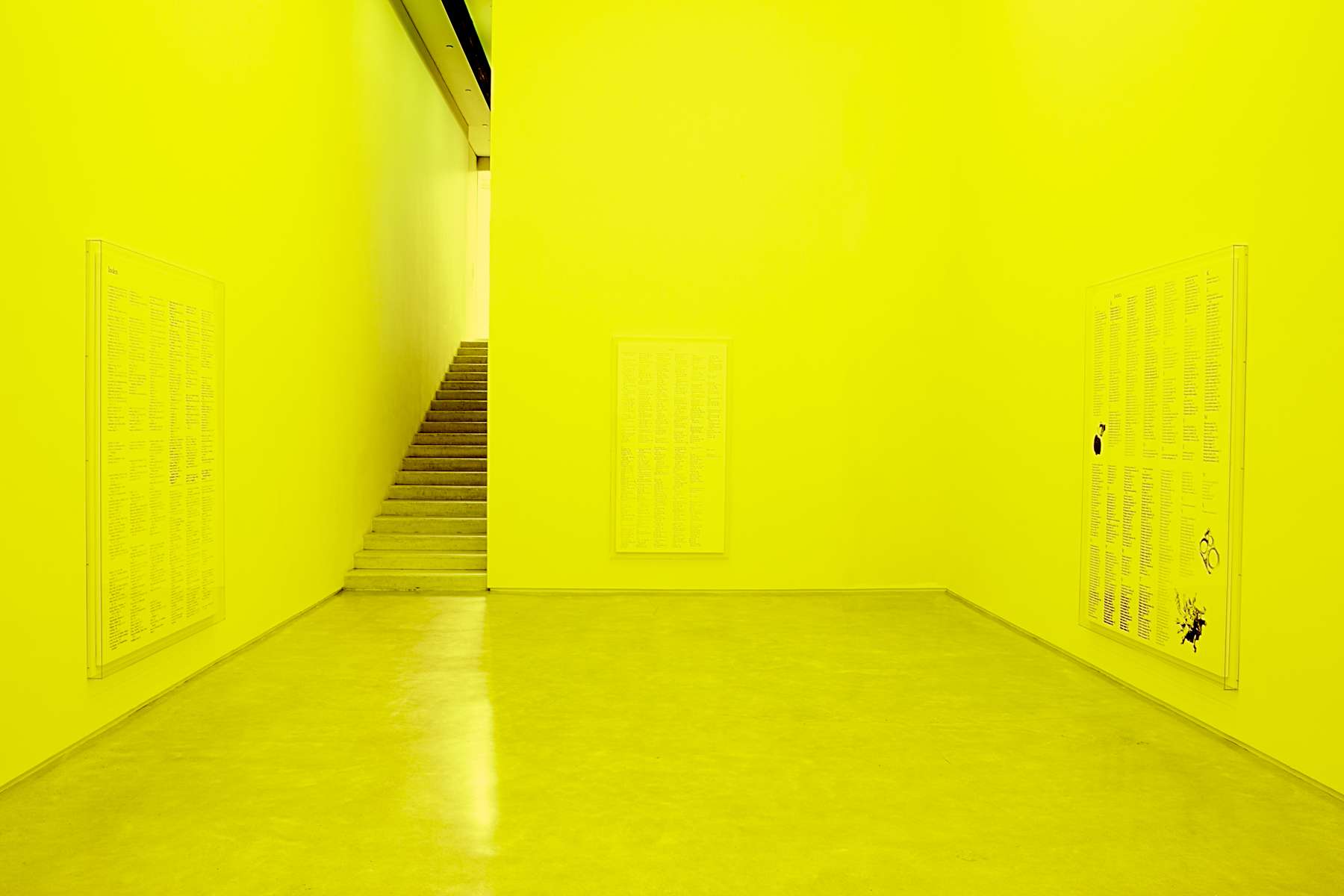 Lucien Smith Nature is My Church

Filled with a yellow light both pure and toxic, displayed in the gallery are Lucien Smith's new Ark paintings.

Nature is My Church, the title of Lucien Smith's exhibition, is borrowed from a pantheist bumper sticker. The exhibition is in two parts located at Salon 94 Bowery and the gallery's Freeman's Alley location.

The vestibule to the Bowery is filled with a yellow light both pure and toxic. Displayed in the gallery are Smith's new Ark paintings. They are silkscreens of indexes taken from various scientific textbooks, framed behind protective plexiglass. The series refers to an "ark," as a vessel that protects against extinction. Here, the cataloguing of sea creatures, shells and coral reef are stand-ins, accounting for and preserving the complete contents of the natural world. The species names read as a memorial. On one side of the gallery, is a compilation reel titled I Like America and America Likes Me depicting Michael Jordan in flight—eternally ascending towards victory while being serenaded by Frank Sinatra's “Come Fly With Me”. In a god-like feat, he never touches the ground. This angelic, though prosaic, vignette serves as a warning to the worship of false prophets. The gallery functions as a sanctuary for this composite, creating a Noah's ark of oceania and semi-biblical ephemera—its religious connotation reinforced by the stained glass light.

Smith cites Rembrandt's famous painting Belshazzar's Feast as inspiration for the show's concept: the divine light, the writing on the wall, the disembodied hand. This element is a sculptural one—a man's arm cut from his body— seemingly animated from a slasher film—is placed at the entrance of Salon 94 Freeman's space. A comic subtext given that the polyester cast is the artist's hand—this body part is loosely based upon the missing limb of Ernst Ludwig Kirchner from his 1915 self-portrait as a WWI soldier. Mene, Mene,Tekel, Upharsin, a landscape painstakingly rendered in oil enlarged from a 1970's postcard of a sunset from Smith's collection hangs alongside the hand. Here we stand in front of this classic horror movie trope (night falls and the undead rise) as Smith mines both the mysticism latent in popular culture and art history.

Expressions of faith are rare in contemporary art. Smith is an archivist and a cataloguer, digging into digital archives. Here he culls a bumper sticker, a basketball hero, a disembodied hand and index pages of scientific books.

This is Lucien Smith's first exhibition at Salon 94. Since he graduated from Cooper Union in 2011, Smith has mounted solo exhibitions at OHWOW in Los Angeles, The Suzanne Geiss Company in New York and most recently with Bill Brady/KC in Kansas City.