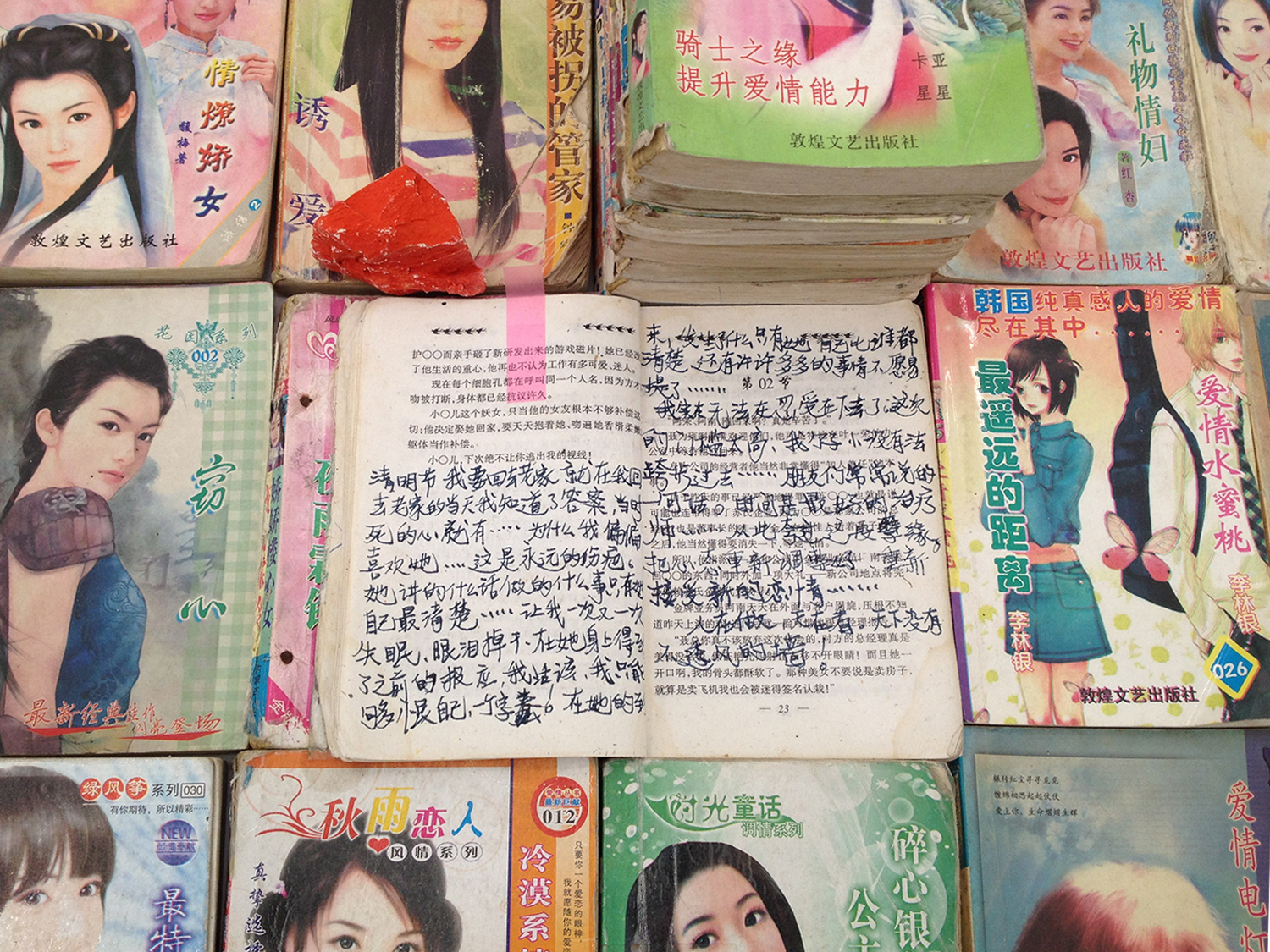 Salon 94 is delighted to present the first US solo exhibition of conceptual Chinese artist Liu Chuang 刘窗. Known for his critical projects that engage the social, economic, and political realities of contemporary China, his practice is made up of quiet interventions and accumulations into the public sphere. Often Chuang sites and gathers specific personal details in order to reveal voices and inner secrets, dreams and daily routines.

Love Story 愛情故事 presents 3,000 used pulp fiction novels rented or borrowed by migrant workers in boomtown Dongguan, China, and the anonymous notes accumulated within them. What Chuang calls Love Stories includes the romantic popular fiction of proletariat China, read mainly by teenagers, students, and young workers - mostly female. These novels were mostly written by Taiwanese and Hong Kong writers in the 1980s to the 1990s. It was a golden age for Taiwan and Hong Kong and new social classes were created, these books met the cultural needs of these new social classes. After the Chinese economic reform in the late 1980s, the books were imported to China and became popular. As contemporary China developed and the industrial revolution took hold, a large number of workers became readers of this new pulp fiction. This literature had low rental fees (1/2 Chinese dollar per book per day) and had the largest readership in mainland China by 2010. Rarely translated into other languages, these books were mainly circulated within China.

As if the notes of the Love Story readers were written directly to him, Chuang has culled, translated and painted them onto the gallery walls. Chuang has identified six types of notes scribbled into the collection of books:

1. Draft for a letter

4. Home address and contact information, biographical info (perhaps an attempt to become pen pals as the books are exchanged)

6. Daily memo (lists of what the person did, ate, or bought that day)

Copied in different hands, the scrawled passages become a portrait of working class China. Each entry is coded with a hand painted rock that relates to the color of text written on the gallery walls. While the love stories are written in a Taiwanese dialect, its readers are from mainland China and speak a different vernacular of Mandarin. Their notations revealing their identities - background, gender and place. Thus, the language acts as a kind of portrait. Chuang is interested in understated and idiosyncratic meanings of mainstream language, the way it interacts as a palimpsest in the public sphere. More, the inaccuracies and transfigurations that occur through the act of translation.

Like a micro network or an analogue internet, users comment individually and do not engage with one another—there is no mutual communication. Like a blog or the app Secret, the notes posted are often personal, with no specific readership. They reveal intimate feelings, like a monologue, meant for a stranger to see. Connection between voices is mute. The readers who rent and return the books – writers themselves – are in a constant monologue. Like the mouse trap – or the play inside a play – there is a new kind of story that circulates and connects the readers.

In his 36 years, Chuang has been witness to the unprecedented industrial and urban growth of China, and his practice interacts with this ever-evolving environment. For his 2010 performance Untitled (Dancing Partner) in Beijing, he altered the flow of traffic using a pair of cars on the road in a slow synchronized drive. He replaces one traffic barrier with another, modifying it, or inserting everyday objects in the space like an air conditioner, apparel or second-hand books, the flow of daily life is his medium.

In another project, shown at Younger than Jesus at the New Museum (2009), he paid job seekers in line at a workers market in exchange for everything they were wearing. Like a contemporary archaeologist trying to capture the personal identities of his generation, he displays the belongings on low plinths. The clothing and personal effects resonate with a strange bodily absence. They convey a varied portrait of the contemporary working class, societal infrastructures and status quo.

Liu Chuang (刘窗 b. 1978 Hubei, China) is a Chinese conceptual artist who lives and works in Beijing, after developing his early practice in Shenzhen. His work Buying Everything on You was featured in The Generational: Younger Than Jesus exhibition at the New Museum in 2009, and in The Rubell Family Collection, Contemporary Arts Foundation, Miami in 2013. The artist’s work has also been shown at Ullens Center for Contemporary Art, Shanghai, Astrup Fearnley Museum of Modern Art, Oslo, and National Art Museum of China, Beijing. He has had solo exhibitions at Taikang Space, Beijing in 2010 and at Leo Xu Projects, Shanghai in 2012. This is the artist’s third solo presentation.