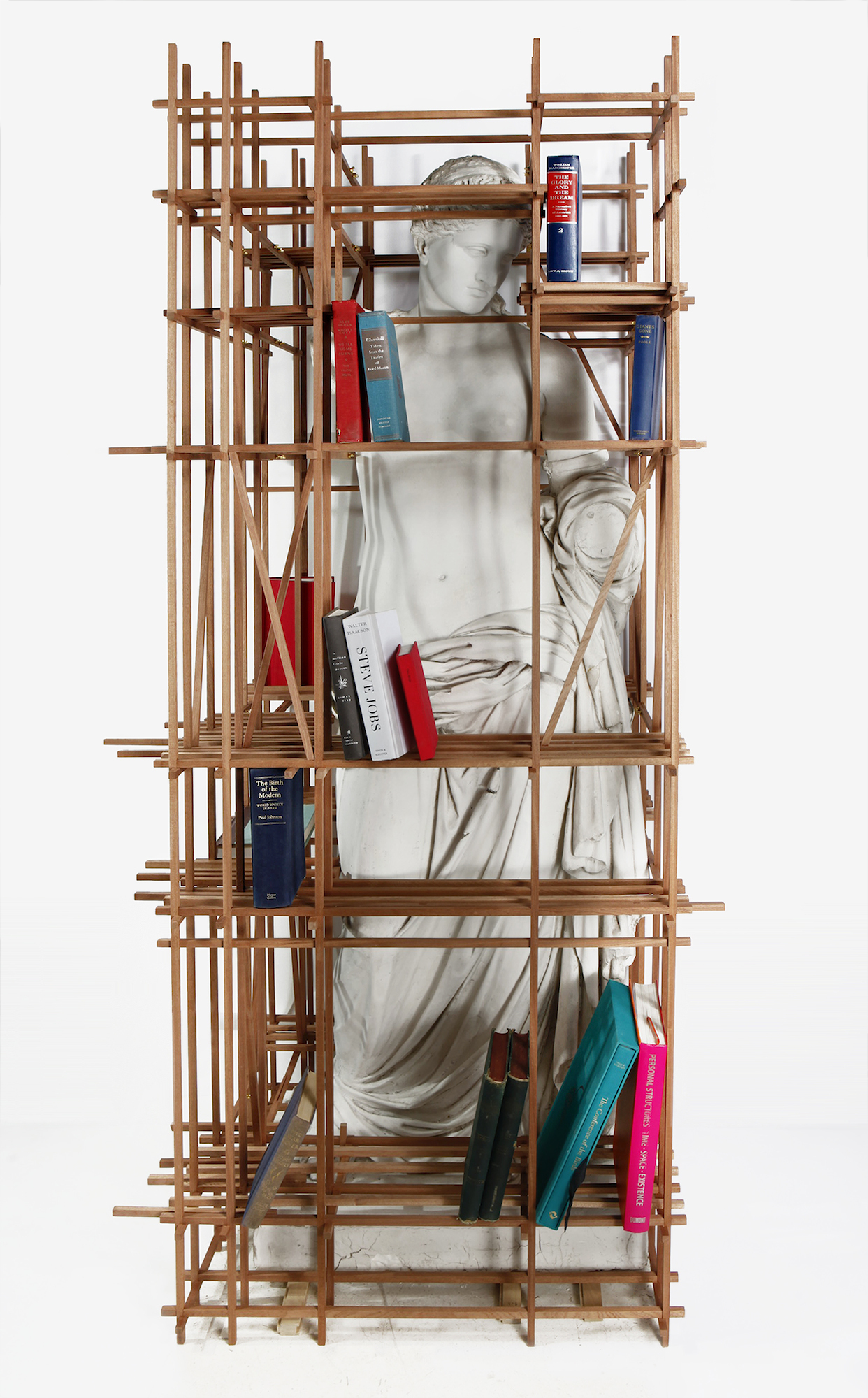 Cristina Grajales Gallery and Salon 94 are pleased to present Functional Sculpture / Sculptural Furniture by Chilean-born, New York-based Sebastian Errazuriz. The dual exhibitions act as mirrors, remodeling known artworks into functional design and cabinets into theatrical, sculptural stages. Re-visualizing and re-engineering the familiar pieces of our lives, Errazuriz turns them around and backwards, reflecting one another.

Errazuriz co-opts the standard design objects of our daily lives – a bike, a lamp, a table, a door, a swingset – and asks viewers to look again, to linger a little longer, and to question our accustomed design. Errazuriz re-makes familiar objects, adding humor, darkness, profanity, shock, provocation and obsession. His interventions include: a lamp made by replacing the head of a taxidermied chicken with a lightbulb; a racing motorcycle where the engine doubles as an open casket for a small bird; swapping out the seat of a playground swingset for a child-size wheelchair. The irreverent and shocking functional objects, can also be seen as memento mori furniture – works about mortality and our fragile bodies. There is often a wink and homage to period style and art historical icons.

At Salon 94, Errazuriz wraps a delicate mahogany shelving system around a marble replica of the Venus d’Arles. The functioning bookshelves double as scaffolding, and we are positioned as a tourist viewing an antiquity in a perpetual state of conservation, with its hidden parts and obstructed views. The half-naked, half-draped goddess of beauty is a much admired, copied and cosmetically reworked theme among Greco Roman sculptors. The original Venus d’Arles was a gift from Julius Caesar to the city of Arles and was lost until it was unearthed in 17th century Versailles. Still today, the Louvre questions whether to place the work in Antiquities or its 17th Century galleries. She languishes in the storeroom, forever invisible. Errazuriz here pairs the seen with the unseen, and playfully turns the Venus replica into home design, confounding classification, and turning a famed sculpture into furniture.

Errazuriz relentlessly collides the division of visual art and design. He takes, for example, Joseph Kosuth’s legendary 1965 One and Three Chairs, made up of a generic photograph of a chair, an actual wooden chair, and the dictionary definition of the chair, combining them meticulously with traditional wood marquetry into one folding chair that hangs on the wall, or can be used as a chair. Errazuriz makes a single chair with object, photograph, and definition in one piece. The artist riffs on the urban legend that MoMA stored Kosuth’s work according to the logic of the museum: the actual chair in the design department, its photograph in the photography department, and its definition in the library! Paying homage to this story, Errazuriz humorously, inextricably connects the three elements. Recontextualizing this seminal work, he also places the multiple realms of the object – material, visual representation, and language – onto the surface.

The concurrent exhibition at Cristina Grajales Gallery is a play of six cabinets in dialogue. Here, the artist’s superb craftsmanship is high art! Errazuriz reinvents the standard box where personal treasures are stored. The idea of “opening” the cabinet is an exercise in turning functional object into sculpture. Re-shaping standard engineering, Errazuriz’s Explosion lays bare the nucleus of the cabinet when the connected exterior panels are pulled outward; Kaleidoscope multiplies the interior objects with mirror paneling; Porcupine’s individually controlled quill-like slats can lay flat or be configured outwards; Mini Magistral has an aggressive exterior of 20,000 outward facing bamboo skewers; Wave has a vertical orientation like the scissor doors of a Lamborghini. Errazuriz says, “I’m inviting people to look at one of the simplest forms of furniture design and to forget that we’re talking about furniture, instead to see it as a way of breaking a box.”

Sebastian Errazuriz was born in Santiago, Chile in 1977, raised in London, and moved to New York in 2004. Errazuriz was selected as one of the top emerging designers by I.D. magazine in 2007, and in 2010 he received the title of Chilean Designer of the Year. In 2011 he was selected as a finalist for the Compasso d’Oro, one of the highest honors of industrial design.

The first solo museum exhibition of the artist’s work, Sebastian Errazuriz: Look Again, is on view now at the Carnegie Museum of Art in Pittsburgh, September 6, 2014 – January 12, 2015. The show includes the hand-crafted furniture and objects made by the artist over the last decade. The exhibition is organized by Rachel Delphia, The Alan G. and Jane A. Lehman Curator of Decorative Arts and Design at the Carnegie.