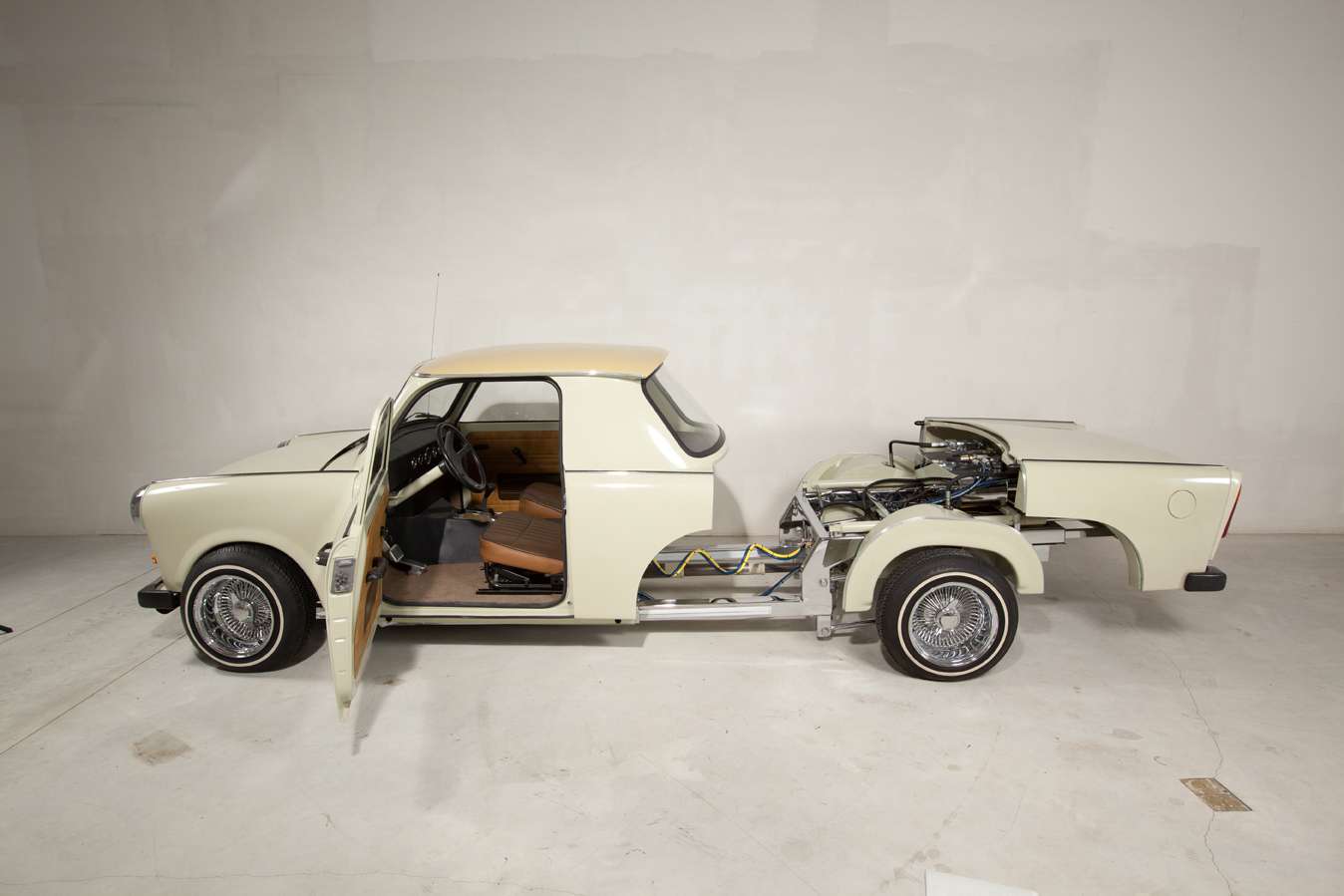 Trabantimino takes center stage after eight years of body work and an unlikely journey from the former East Germany to Oakland, Scottsdale, and Detroit.

Salon 94 Bowery is pleased to open our renovated doors with an exhibition of Detroit-based artist Liz Cohen. Trabantimino, takes center stage after eight years of body work and an unlikely journey from the former East Germany to Oakland, Scottsdale, and Detroit. Trabantimino is a hybridized car and kinetic sculpture that combines a former East German Trabant with a Chevrolet El Camino.

The Trabantamino is an amalgam of two different now-defunct Cold War era types: the East German “people’s car-” humble, anonymous, and functional, and the all-American, large-bodied, low-rider cowboy car. The sculpture contains roughly equal parts of both cars; its main frame a modest Trabant beige, yet then extends out into the full length of the El Camino- showing off its newly chromed American parts.

Cohen purchased the Trabant in 2002 in Berlin, and in the intervening years has become a master mechanic, doing most of the physical work herself. With the help of her mechanic mentors, including Dave Ornellas of World Wide Customs in Oakland; Don Barselloti of Elwood Bodyworks in Scottsdale; and Harvey Ledesma, Don Roberts, and Tom Mello at Kustom Creations in Detroit, Cohen learned the tools of the trade. In the process she hybridized herself, taking on the seemingly disparate roles of journeyman mechanic and bikini-clad car show model, mimicking the pinups found on body shop walls.

Originally a photographer, Cohen began the Trabantimino as a way to break down the barriers between her models and herself, literally becoming what she documented.

Originally a photographer, Cohen began the Trabantimino as a way to break down the barriers between her models and herself, literally becoming what she documented. Alongside the car, the gallery will be showing a series of photographs called the 5 P’s (Proper Planning Prevents Poor Performance)from 2005. Cohen documented every tool amassed by her original mentor, Bill Cherry, throughout his thirty-plus years as a mechanic. The tools are photographed starkly, in black and white on a cement ground, and are reminiscent of Walker Evans’ 1955 project The Beauty of the Common Tool. In addition, we will include the ephemera and various publications featuring the Trabantamino, from inception to display.

Liz Cohen lives and works in Detroit. She has exhibited nationally and internationally including exhibitions at the Rubin Center for the Visual Arts, Galerie Laurent Godin, Fargfabriken, David Klein Gallery (Detroit), The Scottsdale Museum of Contemporary Art, and the Yerba Buena Center for the Arts (San Francisco). She has received awards and fellowships from the Creative Capital Foundation and Artadia: The Fund for Art and Dialogue, the MacDowell Colony, and Akademie Schoss Solitude. She is the Artist-in-Residence/Head of Photography at the Cranbrook Academy of Art.