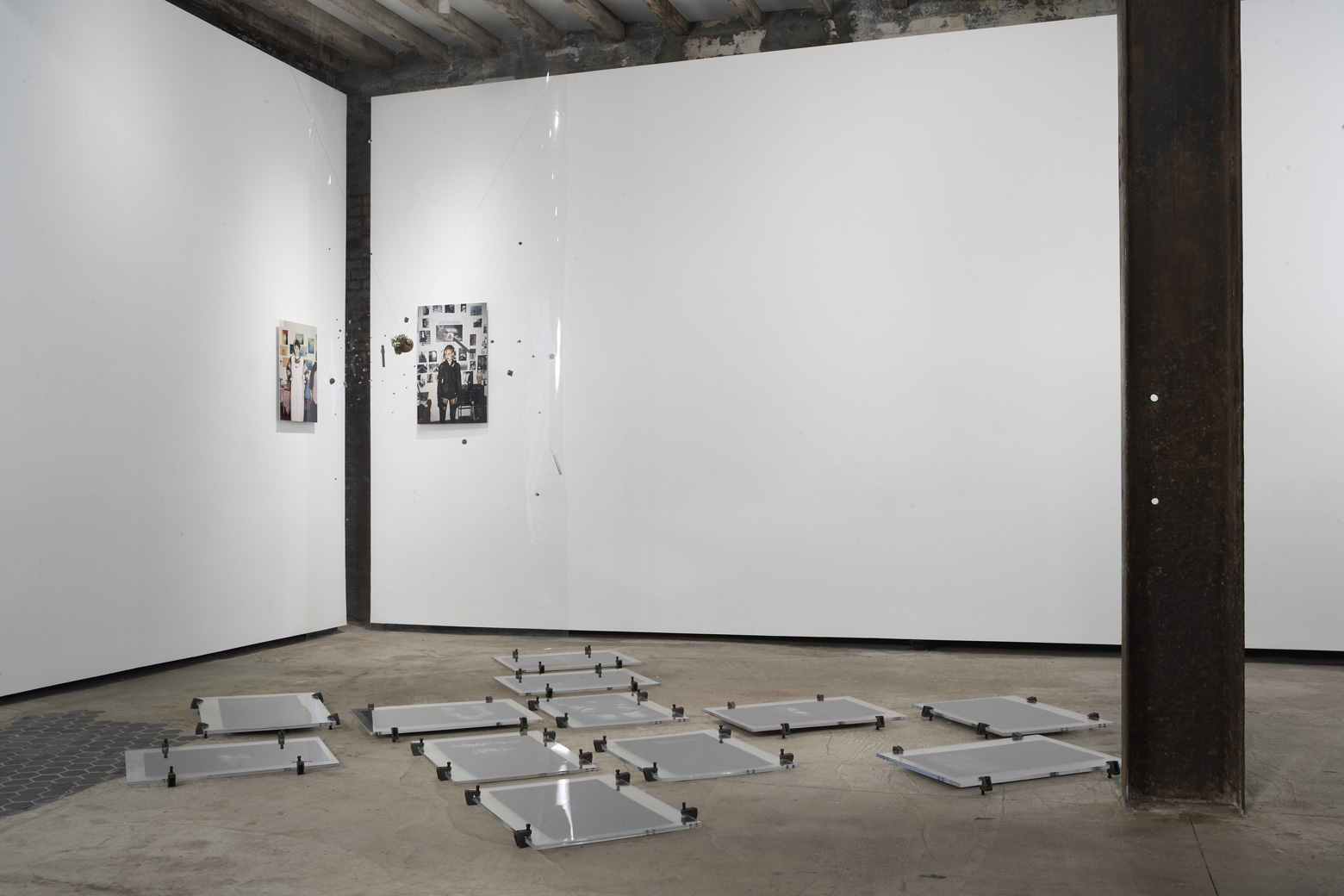 In “Identity Installation,” created for Salon 94 Freemans, Kerstin Brätsch conceived a three-dimensional space based on the idea of spontaneously building a house without blueprints, the premise of E.T.A. Hoffman’s story, “Rath Krespel”. Her construction starts with twelve floor tiles made from New York Times advertisements treated with spray paint and enclosed in thick Plexiglas. A clear plastic divider with embedded magnets hangs above the tiles, revealing a hanging plant and two photographs of a young woman behind. The installation introduces durable materials (metal clamps, plastic film, magnets, etc.)into a volatile assemblage, with the oscillating plant acting as an organic intervener between static states.

In 2005, as part of a public art project, Tue Greenfort ran a free public bus converted to run on emission-free biodiesel over the river Elbe between Niedersachsen and Lower Saxony, a region renowned for its expansive rapeseed fields that supplies biodiesel production. He kept the bus for personal use for two years, after which he began doubting the sustainability of rapeseed biodiesel given the effects of monoculture on the ecosystem—potential soil depletion and heightened crop susceptibility to pathogens. The oil tank formerly used to fuel the bus now appears in Circulation-After Hans Haacke (2007). Haacke’s 1969 work Circulation presented a tangle of pipelines that extended across the gallery floor as air bubbles propelled water through the network of pipes, illustrating the idea of freedom within a strictly defined system. Greenfort expands on Haacke’s idea, exchanging the “neutral” distilled water for plant oil, now representing not only a source of food but also a method of green transportation as an alternative to crude oil.

Jordan Wolfson’s piece, a two-channel projection titled ‘Tropical Nirvana’ (2004-2008), shows mirrored views of a young man delivering a monologue while sitting in a tall, densely foliaged tree. In stream of consciousness style, he parallels the marketing of idyllic islands in the Caribbean and the impact of the tourism industry on these “tropical nirvanas” with the self-destruction of Kurt Cobain, the lead singer of the band Nirvana.

Kerstin Brätsch (b. 1976) lives and works in New York. In April 2008, she will perform at MuMok, Museum of Modern Art, Vienna in a performance titled whe n you see me again it won’t be me /this is the waiting room, a collaboration between “its our pleasure to serve you” (performers: Kerstin Brätsch, Allison Katz and Georgia Sagri, costume designer: Adele Roeder) and artists Jeremy Eilers and Nic Xedro.

Tue Greenfort (b. 1973) lives and works in Berlin. Upcoming exhibitions in 2008 include solo shows at the Kunstverein Braunschweig Galeria Zero, Milan and the Fondazione Morra Greco, Naples. Tue Greenfort will also participate in the Liverpool Biennial.