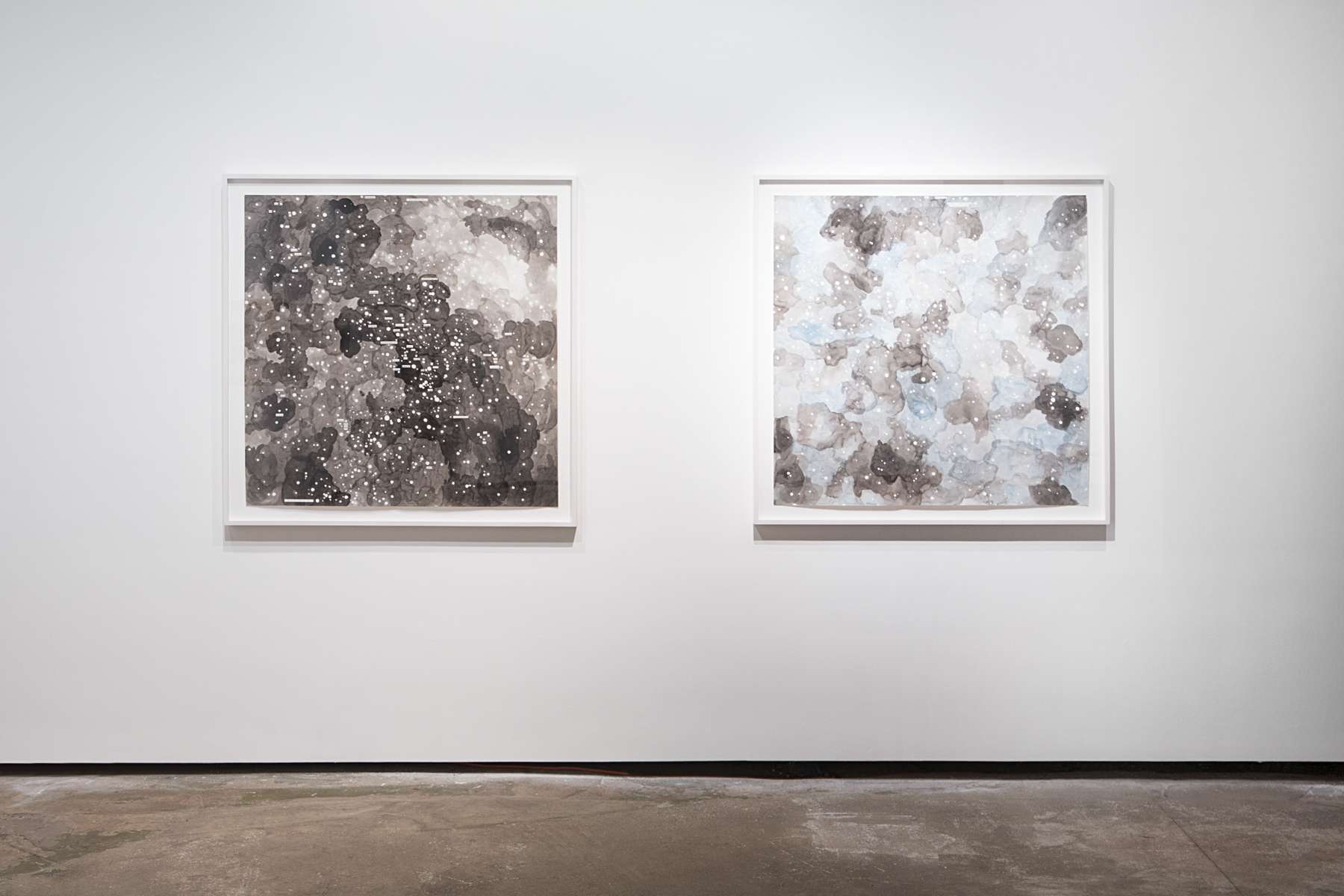 ​“many words into one”….”Let the awful shade stop rising”

Jessica Rankin’s new constellation drawings accumulate words, sometimes sparingly, sometimes in rhythmic convulsions. Like her text-based embroideries for which she is known, these randomized word paintings are stitched together into complex, nonlinear patterns and arranged against cerulean blue & black ink mappings of the stars. Taking theories of cosmic expansion and contraction as her starting point, Rankin creates dynamic and highly personal abstractions that oscillate between order and disorder, construction and destruction.

Rankin begins her creative process with the written word, combining stream of consciousness, found texts, stories, memories and fleeting thoughts. She then cuts apart individual words and phrases and recomposes them into new sequences using a method of “guided chance.” Words are integrated like stars into celestial maps, each one a specific night sky. The constellations, as it were, become sites for the re-inscription of meaning and make up a vast visual poem based on the unpredictable, the fractal.

Within each piece the string of words read as a poem. The constellations they inhabit function as a complex web, brain-scape or vascular system. While new meanings are formed in their chance encounters, there are also the absences, elisions or the obscured. “Reading” these works is a dynamic process as each viewer enters and leaves them at different points and experiences a poem of seemingly infinite possibility.

Rankin’s new series of small-scale collages and accordion books similarly explore the phenomenological interplay between image and text. Sourced from astronomy textbooks, maps and other found material, these works pair phrases with abstracted images that co-exist in a play between harmony and chance.

Jessica Rankin has long been inspired by poetry and the written word. For this exhibition, she has collaborated with noted poet, Brenda Shaughnessey, to select a group of writers to react and riff upon the drawings. The result are poems of faded love, the dog of Sputnik, and an ode to Beyoncé. In conjunction with the exhibition, Salon 94 Freemans will host three poetry readings on November 5th, 7th, and 16th and will publish a catalogue of Rankins’ work alongside the poems of Michael Albo, Raphael Allison, Mark Bibbins, Tina Chang, Eduardo C. Corral, Alex Dimitrov, R.Erica Doyle, Matthea Harvey, Cathy Park Hong, Morgan Parker, Brenda Shaughnessy, Pamela Sneed and Craig Teicher.