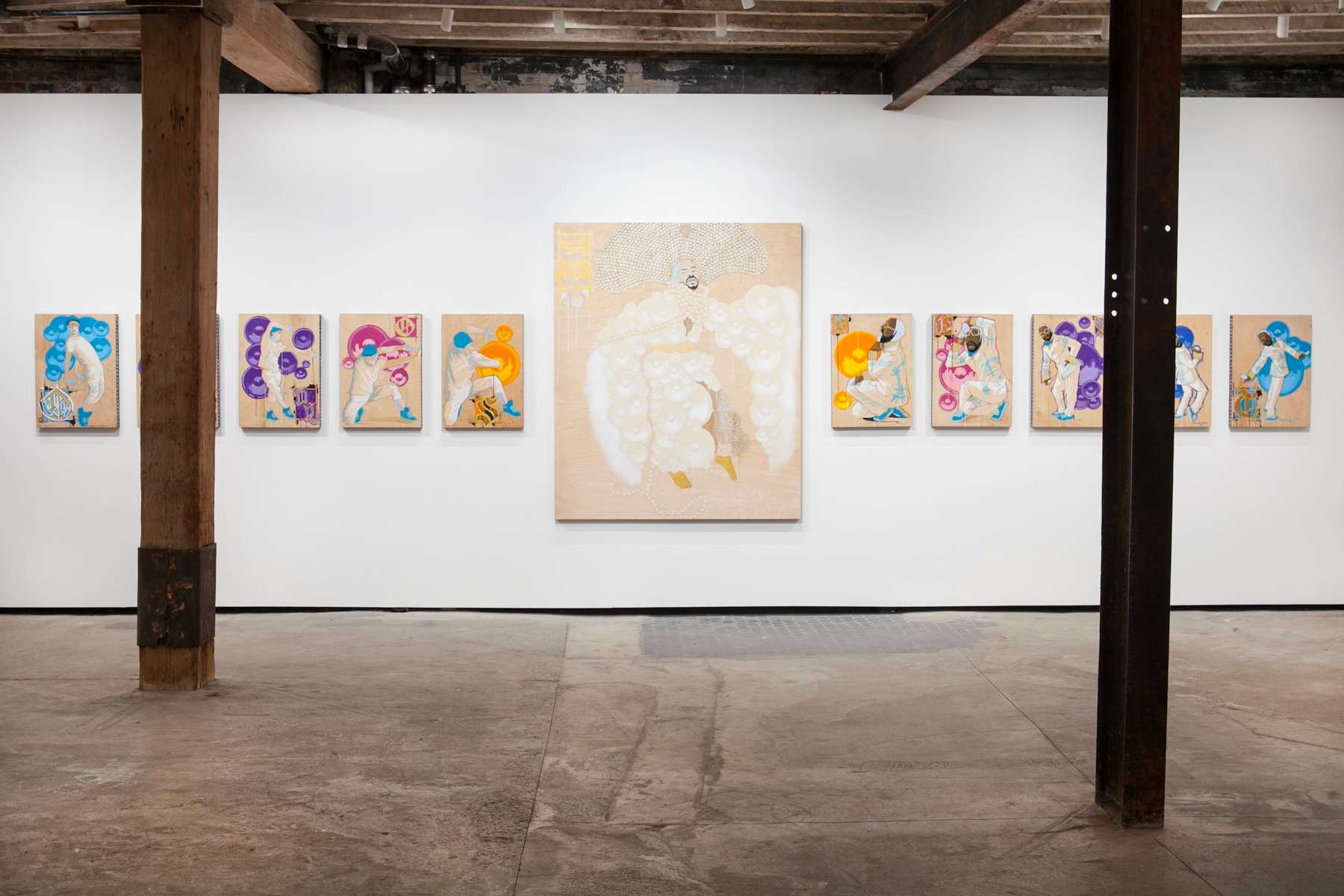 In eleven new paintings installed as an altarpiece, iona ROZEAL brown depicts the mid-motion performances of collaborators and dancers Benny and Javier Ninja and Monstah Black.

Salon 94 is pleased to present the gallery’s first exhibition of iona ROZEAL brown. A simultaneous solo show by the artist will be on view at Edward Tyler Nahem Fine Art located at 37 West 57th Street. The artist will present a live performance program at Salon 94 Freemans on Sunday, March 10th from 1 – 7 PM.

iona ROZEAL brown’s paintings are rooted in the performance of gender, sexuality, and identity. In eleven new paintings installed as an altarpiece, brown depicts the mid-motion performances of collaborators and dancers Benny and Javier Ninja and Monstah Black. The artist recognized the relationship between their movements and the performances of Bando Tamasaboro, a well-known female impersonator, or “onnagata”, of Japanese Kabuki theater. The figures presented are strong bodies in solid postures with celebratory attitudes. The poses come from a remix of vougueing, hip-hop, and break dancing culture as well as devotional church hymnals and traditional Kabuki and Noh Japanese theater. The attitude also picks up where Brown’s Performa 2011 project left off—in the battle of yestermore… the artist collaborated with the same hip-hop and vogue-ing dancers Monstah, Benny and Javier in a choreographed Kabuki-inspired modern-day dance-off.

The portraits continue Brown’s ongoing body of cultural and mythological remixing, an artistic practice that mirrors the artist’s own DJ strategies of sampling, mixing, and syncing. The new works are meant to represent icons, angels, and archangels, and they take from tropes of Byzantine iconography in idiosyncratic ways. The African-American and Latino characters are painted with bright white and gold highlights on thick panels of raw woodgrain, the white and the wood functioning as markers of purity, the natural and the heavenly. Multicolored circular shapes stand in for speakers, records, and turntables while doubling also as halos encircling the figures. The works have edges painted with silver ring patterns meant to echo the dots on the side of a turntable platter. The surfaces are imbued throughout with self-conscious drips, a formal code and deliberate reference to a particularly masculine brand of mid-century modernist painting.

Iona ROZEAL Brown is a native of Washington DC and a graduate of the San Francisco Art Institute and Yale University. In addition to her critically acclaimed commission for Performa 2011, the artist has been featured in solo exhibitions at the Corcoran Gallery of Art, Washington DC, MoCA Detroit, MoCA Cleveland, and the Wadsworth Atheneum Museum of Art, Hartford. She currently lives and works in Brooklyn.