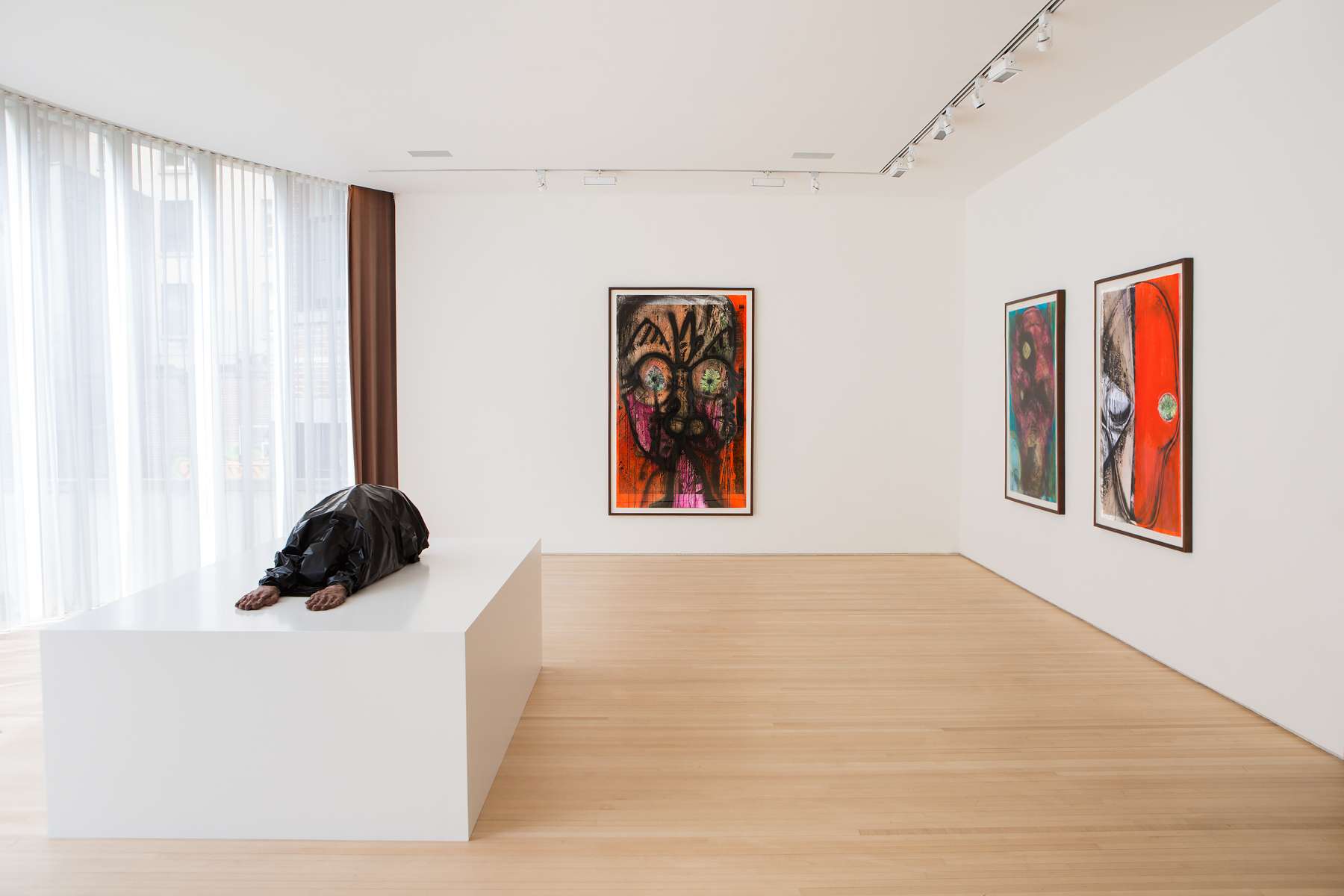 Huma Bhabha With A Trace

A sculpture, a suite of photo-drawings, and a series of studies on paper—the genesis of Huma Bhabha's concurrent installation at the Metropolitan Museum of Art’s Iris and Gerald B. Cantor Roof Garden.

Huma Bhabha’s fourth solo exhibition at Salon 94, titled With a Trace, includes a sculpture, a suite of photo-drawings, and a series of studies on paper, which were the genesis of the artist’s concurrent installation at the Metropolitan Museum of Art’s Iris and Gerald B. Cantor Roof Garden.

Bhabha’s visual vocabularies are vast. While rooted in the Romantic, allusions to science fiction, B movies and arthouse films merge with Modernist sculpture, Egyptian reliquary, and Greek kouroi. They call to mind the poetic limbo of Tarkovsky’s Stalker, the alien Nature Studies of Louise Bourgeois, and the jewel box universes of Mike Kelley’s Kandor series. As her reconfigured references overlap and multiply, they become an avenue to explore place, memory, war, and the pervasive histories of colonialism.

In the ink, pastel, and charcoal studies, Bhabha’s cinematic approach is reminiscent of the sequential narrative of comic book panels. The drawings serve as a storyboard for two actors on a stage with Central Park as the backdrop. In a recent interview, Bhabha stated that “the roof is a landing pad where the sculptures look as though they have just touched down from outer space.” The first is a looming, muscled super hero depicted with a black avenger’s cape or sometimes a tail. The other, a kneeling prostrate figure, appears in prayer, resembling a lifeless relic or body bag. Across the works, Bhabha approaches the figures from different angles. Panning in and out, she uses abstract swaths of bright blues and greens to create the sky and earth. Other works appear underwater, engulfed in a wave.

At the center of the room is her early sculpture with clay and black plastic (Untitled, 2006), an antecedent to the inky specters that appear on the page. Set atop an altar-like plinth or landscape, the figure lies in a submissive pose. She originally created this form in 2002 and made different iterations in 2005, 2006, and now it appears again as a monumental bronze on the Metropolitan Museum of Art’s roof. Bhabha’s abject pilgrim is both a prophet and a memento mori.

For her new photo-drawings, the artist begins by taking photos of unpopulated landscapes in places she has lived or visited: Karachi, Bhopal, Kauai, and Poughkeepsie. She captures barren stretches of dirt road and abandoned construction sites. The focus is on places in which a sculpture could exist—the landscapes become a plinth for the marks to come. Bhabha alters the surface of each oversized print with ink and paint, mapping visceral forms, suggestive of Songye masks or Ridley Scott’s Alien. She adds collage elements that morph into all-seeing marijuana eyes on haunting, otherworldly faces and bodies. This idiosyncratic chorus of avatars, Golems, and anthropomorphized animals watch as the drama unfolds. Is the totemic figure seeking an offering? Is the Other performing penance or will it rise up? What traces will be left behind?

Born in 1962 in Karachi, Pakistan, Huma Bhabha received her B.F.A. at the Rhode Island School of Design in 1985 and her M.F.A. from Columbia University in 1989. Forthcoming solo exhibitions include Other Forms of Life at the Contemporary Austin (2018) and a survey retrospective at ICA Boston (2019). Bhabha’s work will also be included in the 57th edition of the Carnegie International (2018) and will be included in Many Tongues: Art, Language, and Revolution in the Middle East and South Asia at the Museum of Contemporary Art, Chicago (2020). Her work has been the subject of numerous solo and group exhibitions at prominent institutions worldwide, including the 56th International Art Exhibition at the Venice Biennale (2015); The Metropolitan Museum of Art, New York (2013); Palais de Tokyo, Paris (2012); MoMA PS1, New York (2012 and 2005); Collezione Maramotti, Reggio Emilia, Italy (2012); Aspen Art Museum (2011); Whitney Museum of Art, New York (2010); the 7th Gwangju Biennale, Korea (2008); and the Royal Academy of Arts, London (2006). She is the 2013 recipient of the Berlin Prize, Guna S. Mundheim Fellowship from The American Academy, Berlin, and the 2008 recipient of the Emerging Artist Award from The Aldrich Contemporary Art Museum, New York. She lives and works in Poughkeepsie, New York.

The Roof Garden Commission: Huma Bhabha, We Come in Peace will be on view on the Iris and Gerald B. Cantor Roof Garden at the Metropolitan Museum of Art, New York through October 28, 2018. The exhibition is curated by Sheena Wagstaff, Leonard A. Lauder Chairman of Modern and Contemporary Art and Shanay Jhaveri, Assistant Curator of South Asian Art.