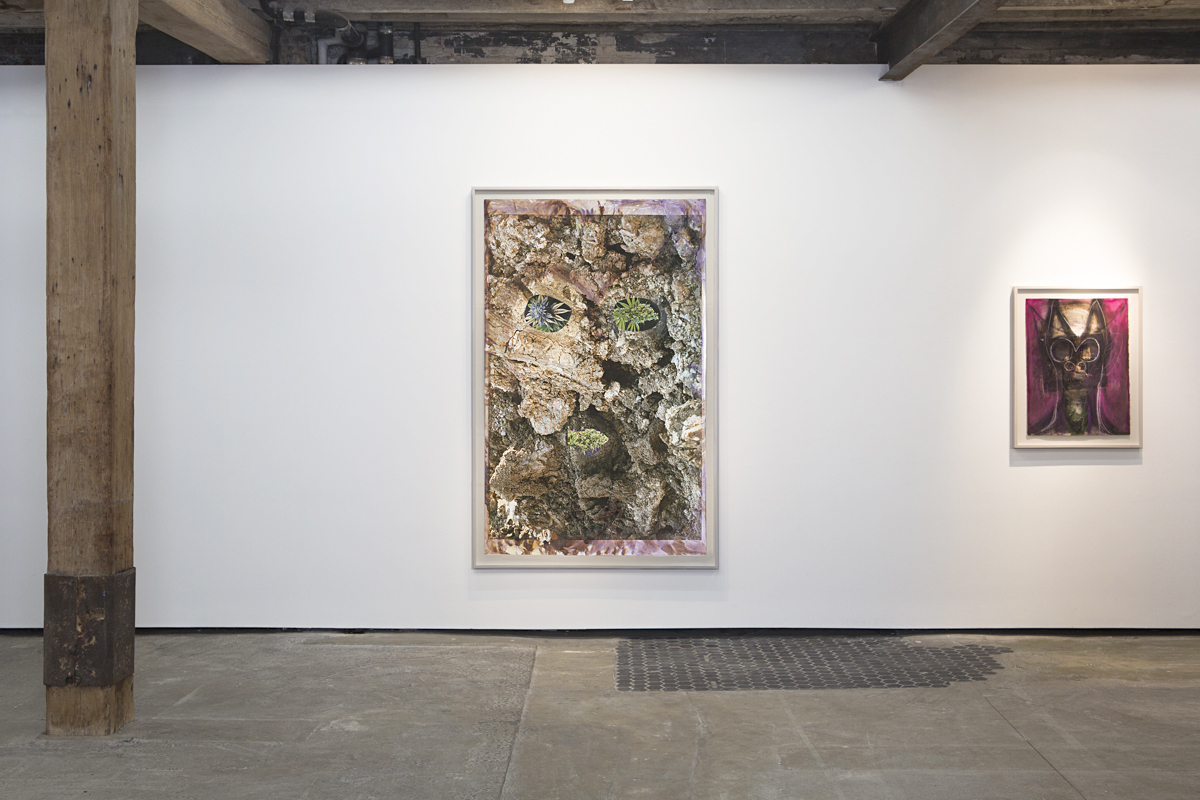 Huma Bhabha presents drawings on photographs as well as pastel and ink drawings—electrifying slow, dark and feverish passages with shocks of color.

​In Huma Bhabha’s third exhibition at Salon 94, the artist presents new work in both of the gallery’s downtown spaces. In each installation, Bhabha draws from an expansive trove of references that cross genres, centuries, continents and mediums. Her inspirations are non-hierarchical, coming as much from popular horror movies and science fiction as from ancient artifacts, religious reliquary, Modernist sculpture and German neo-expressionism. The work can be read as an encyclopedic memory that maps, retraces, and re-imagines cultural history as an active interplay between decay and renewal.

At Salon 94 Bowery three bronze figures -- a pantheon of broken gods, totemic cyborgs, and animalistic demons -- take center stage. Two standing figures are monumental in scale -- over six feet tall -- part of an extended family of the artist’s figurative works. One figure is painted with bright yellow, while another is white as a ghost with black markings, channeling Christopher Wool and the graffiti-ed walls of Karachi. A third writhes on the floor below like an intertwined serpent. Together, they recall famed Jean-Paul Sartres’ No Exit (Huis Clos), his existential play that locks three deceased characters in a room for all eternity. Playing with the gallery’s architecture, Bhabha has staged an installation that allows viewers a bird’s eye view before descending into a cell (or hell).

Surrounding the sculptures are drawings made on rolls of white photography backdrop paper. These works reveal a palimpsest of Bhabha’s art making practice. The paper was set on the ground of her studio during the making of her recent sculpture; footprints and other markers are left visible. The distressed works carry traces of studio scraps and process, and depict other architectural and building materials like bricks, wood, and stone.

At the gallery’s Freeman’s Alley location, Bhabha presents drawings on photographs as well as pastel and ink drawings. The pastels are visceral hollowed-out, mask-like portraits that repeat the outlines of a face—as if tracing a human or spiritual presence. Bhabha electrifies slow, dark and feverish passages with shocks of color. The larger collages and drawings on photographs similarly suggest haunting presence and deal with persistent mapping and re-tracing, considering abandoned bodies and spaces, destroyed landscapes, re-birth, abject civilization and its discontents.

Bhabha’s sculptures are also prominently on view now in All the World’s Futures curated by Okwui Enwezor at the Venice Biennale 2015. The artist’s first solo museum exhibition took place in 2012-13 at MoMA PS1 and she has had recent solo exhibitions at VeneKlasen Werner Gallery, Berlin (2014), Collezione Marmotti, Reggio Emilia, Italy (2012), and the Aspen Art Museum in Aspen (2011). Her work is included in the public collections of The Museum of Fine Arts, Houston, TX; The Museum of Modern Art, New York; The Metropolitan Museum of Art, New York; Centre Georges Pompidou, Paris; and the Whitney Museum of American Art, New York, among others. The Pakistani-born, American artist lives and works in Poughkeepsie, New York.This exhibition is accompanied by a full-color monograph featuring an essay by David Levi-Strauss.