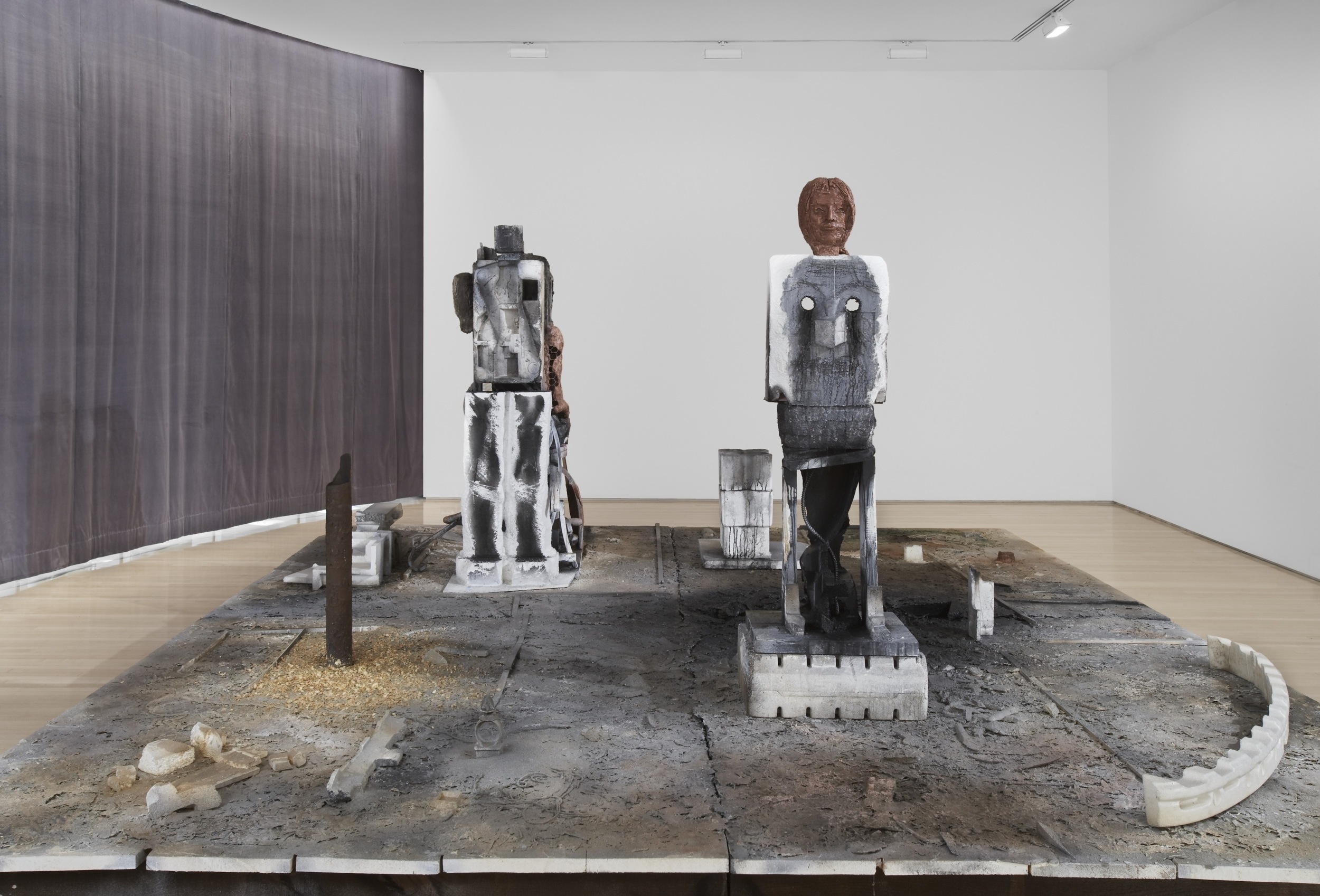 Bhabha has gained widespread recognition for her raw, sculptural forms, which evoke primeval, ritualistic personages or the post-apocalyptic inhabitants of a world gone awry. Constructed from such humble materials as air-dried clay, wire, mud, Styrofoam, studs and scavenged wood, her work explores the fertile ground where the amorphous and the material collide. In Bhabha’s hands, for example, a dilapidated, rusted and discarded chair is recycled into a throne upon which a cyborg king sits. Architectural materials, junk and baubles are thus re-assembled into hybrid beings.

At Salon 94, Huma Bhabha will exhibit a monumental sculpture composed of a plinth and two ancient figures whose bodies show signs of their decaying mortality. The craggy, distressed surface of the plinth from which the figures emerge suggests the topography of a Kiefer painting scraped and rearranged by time, war and erosion. The plinth acts as stage, a theater in the round for an unspoken drama that has perhaps already occurred or can only be witnessed as future tragedy. The figures stare outwards, their backs to each other and to their shared pasts. Yet the title of this work implies a future and a re-birth:

"...And in the track of a hundred thousand years, out of the heart of dust Hope sprang again, like greenness." - Omar Khayyam, The Ruba’iyat

The three works on view at Salon 94 Freemans are a sarcophagus, a bust and a pair of desiccated, amputated clay feet. Feet have always played a central role in Bhabha’s lexicon both for what is and isn’t there. They are cinematic props of destruction, actors without a body, human flesh in decay. Together with the bust whose ancient skin lies grafted onto an armature of detritus, they signify nomadism and stasis, progress and ruin, art that simultaneously destroys and invents. The final work in this exhibition, “The Immortal Story” (2007), is a Renaissance inspired sarcophagus whose Carl Andre-like stacked linearity is repackaged as 21st century modernist garbage architecture. The tomb itself becomes a golem-like being, hovering between death and life until the inevitable promise of new life rises from the debris.

Concurrent will be an exhibition of her photographs at ATM Gallery, New York.