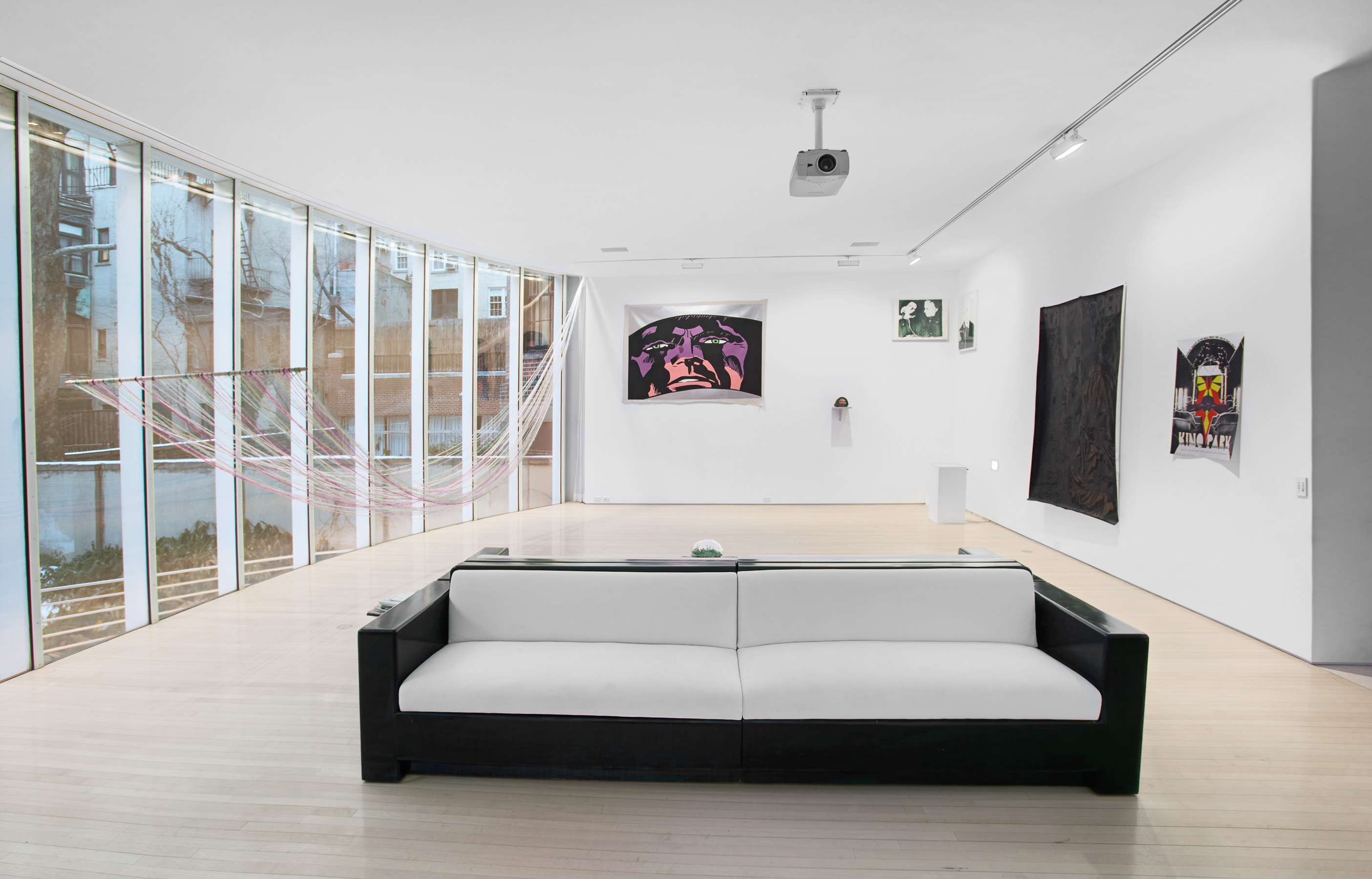 Hello, I'm crashing is an exhibition bringing together works that share a pared-down style, a simplicity of means, that express an idea of vulnerability and impermanence of life. These works suggest an intuitive acceptance of forces that exist beyond oneself. Wabi Sabi serves as a guiding force in this exhibition. Principles of Wabi Sabi, an ancient Japanese aesthetic belief, serve as alternatives to Western aesthetic ideals of perfection, beauty, and monumentality. Wabi Sabi stresses a lack of pretension, simplicity, and satisfaction with imperfection. It implies an intuitive, rather than a rational and logical, worldview, and immateriality, rather than materiality, becomes an ideal.

Chuck Nanney's 1998 painting appearance 's' acts as the starting point of the show. The work depicts Dave Bowman, the astronaut floating in space in 2001: A Space Odyssey (Stanley Kubrick, 1968). Nanney reproduces on canvas the close up of the face of the astronaut from a frame of the 1976 Jack Kirby adaptation of the movie for Marvel Comics. Nanney magnifies the moment when the hero stares at himself on his death bed and is transformed by the monolith into a fetus; the story moves back to its start, endlessly.

In Angie Reed (2007), a large pastel, watercolor and charcoal drawing, Iris van Dongen captures an ephemeral moment of a performer on stage, her arms raised.

Hamakarma (2006) by Vidya Gastaldon, a wool hammock that seems to disappear at the end of the space like the Milky Way, floats over the exhibition space. This new work is an addition to Gastaldon's universe of handmade wool mushrooms, stones, ponies, mountains and monsters, all made in soft pastel colors. Gastaldon's positive energy objects are linked to spirituality and the creative forces of the universe. She has taken an interest in geobiology. According to geobiology, all objects, including works of art, are a source of invisible forces, and it is essential to handle this power emitted by objects consciously and responsibly. She deliberately uses simple materials –often yarn and felt, and watercolors with minimal shapes to create intricate sculptures and drawings.

Costa Vece shares her talent for alchemy, turning modest materials into potent sculptures. Here, he transforms a loaf of bread and a wool skiing hat into a disturbing ghostly character.

In 2005, Norwegian photographer Torbjørn Rødland attended two Sasquatch symposiums in the Seattle Area. Between the conferences, he drove around Washington State's Olympic Peninsula - a hotspot for Bigfoot sightings – making the images for his third film. More pantheistic meditation than Discovery Channel documentary, Blues for Bigfoot is nonetheless built around an interview with a wildlife biologist and the eyewitness account of a native American Rødland met in Bellingham. The melancholic score is improvised by Sam 'Bluzman' Taylor. In Rødland’s work, reality is constantly negotiated and endlessly slipping into alternatives provided by fantasy and myth. Rather than trying to explain nature, Rødland's images present us with places where intuition seems to be more helpful and reliable than rational thought.

Bozidar Brazda’s portraits have the ephemeral quality of propaganda flyers or concert posters, but are not made using a silkscreen press: they are paintings on paper, often soft watercolors developed slowly with no sharp edges in a technique that contrasts with the brashness of the subject matter: a punk rock couple. These works are connected to an ever-expanding narrative which Brazda develops in his installations and performances.

Paul-Aymar Mourgue d’Algue’s drawing of man (Lee ‘Scratch’ Perry) holding a makeshift camera towards the audience is rendered in different shades of black marker, graphite, china and gold ink layered on top of each other, revealing a fantomatic silhouette. The work is an allegory for the constant experimentation, risk taking, potential failure of the moment of artistic creation.