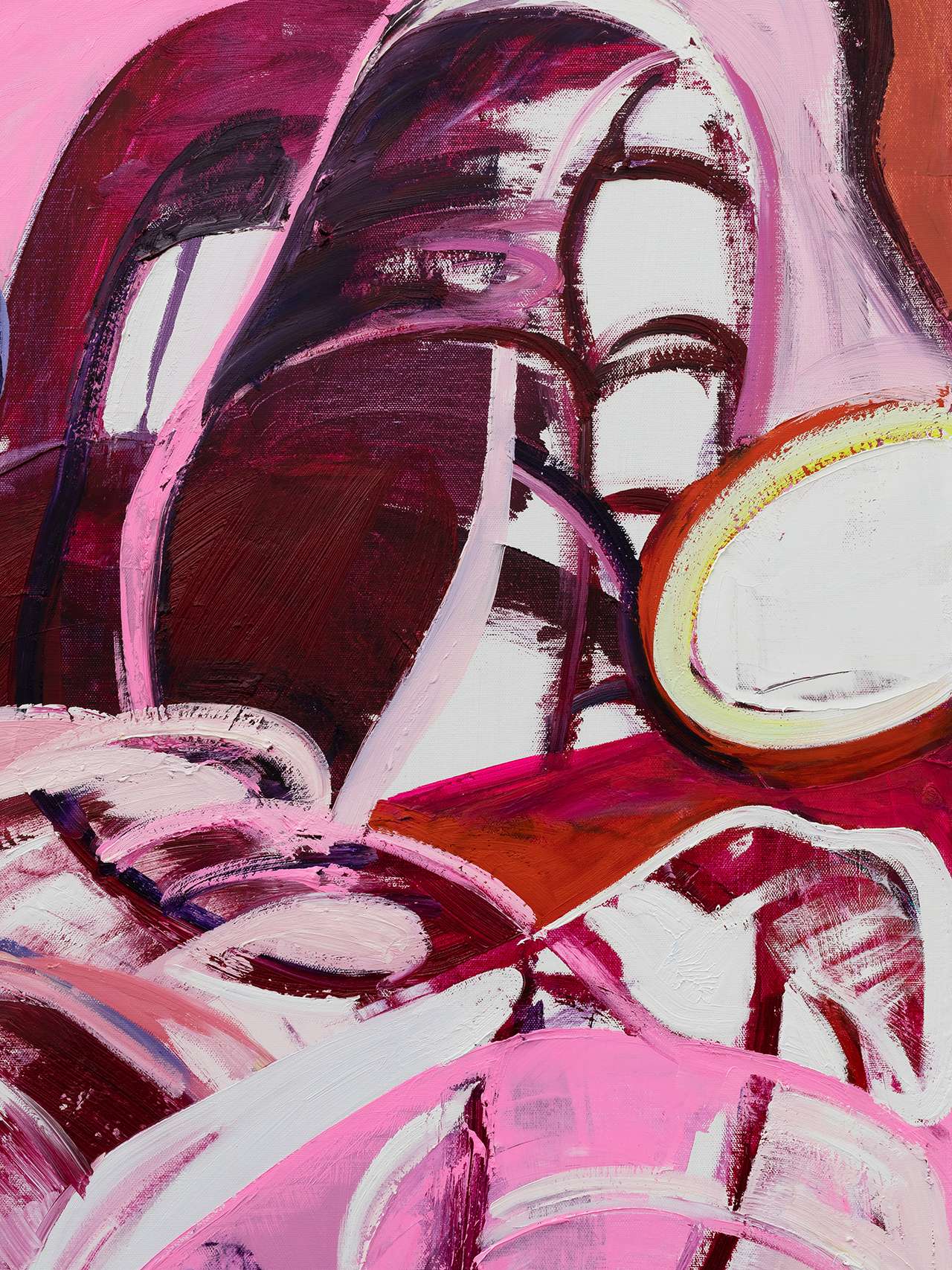 "Each painting, with its loose and spontaneous quality, is larger than life and matched with pent-up energy that propels viscous blood, tumbling folds, voluptuous flesh, ripped organs, and deconstructed meat cascading from the canvas, like a simultaneously seductive, dissonant, and violent cacophony." – Danielle Shang, 2021 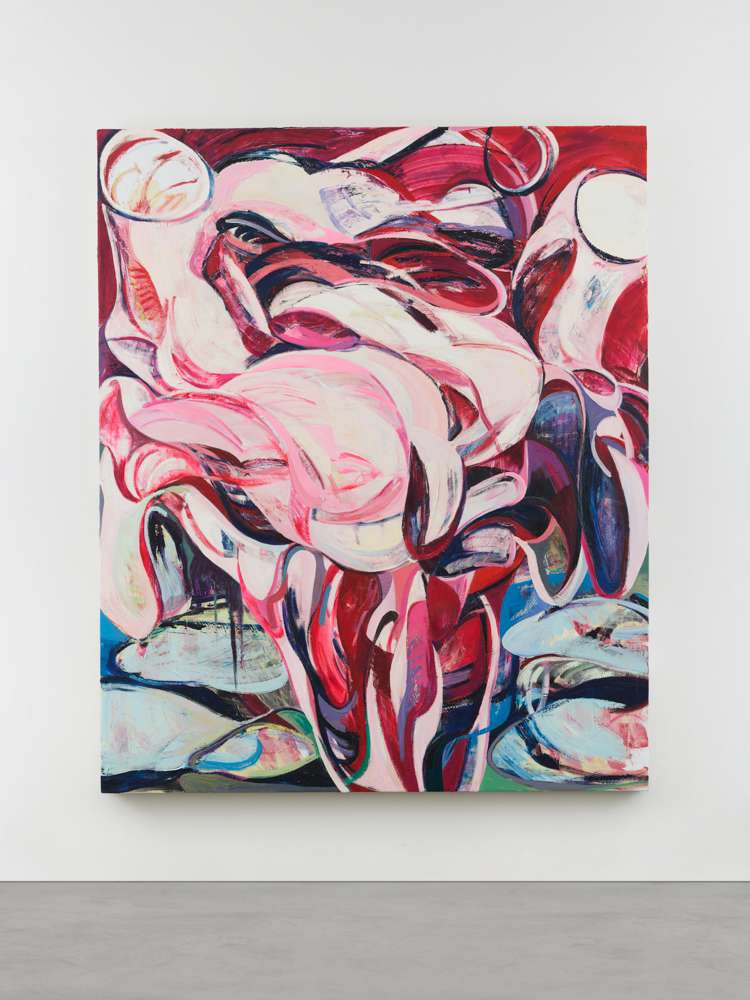 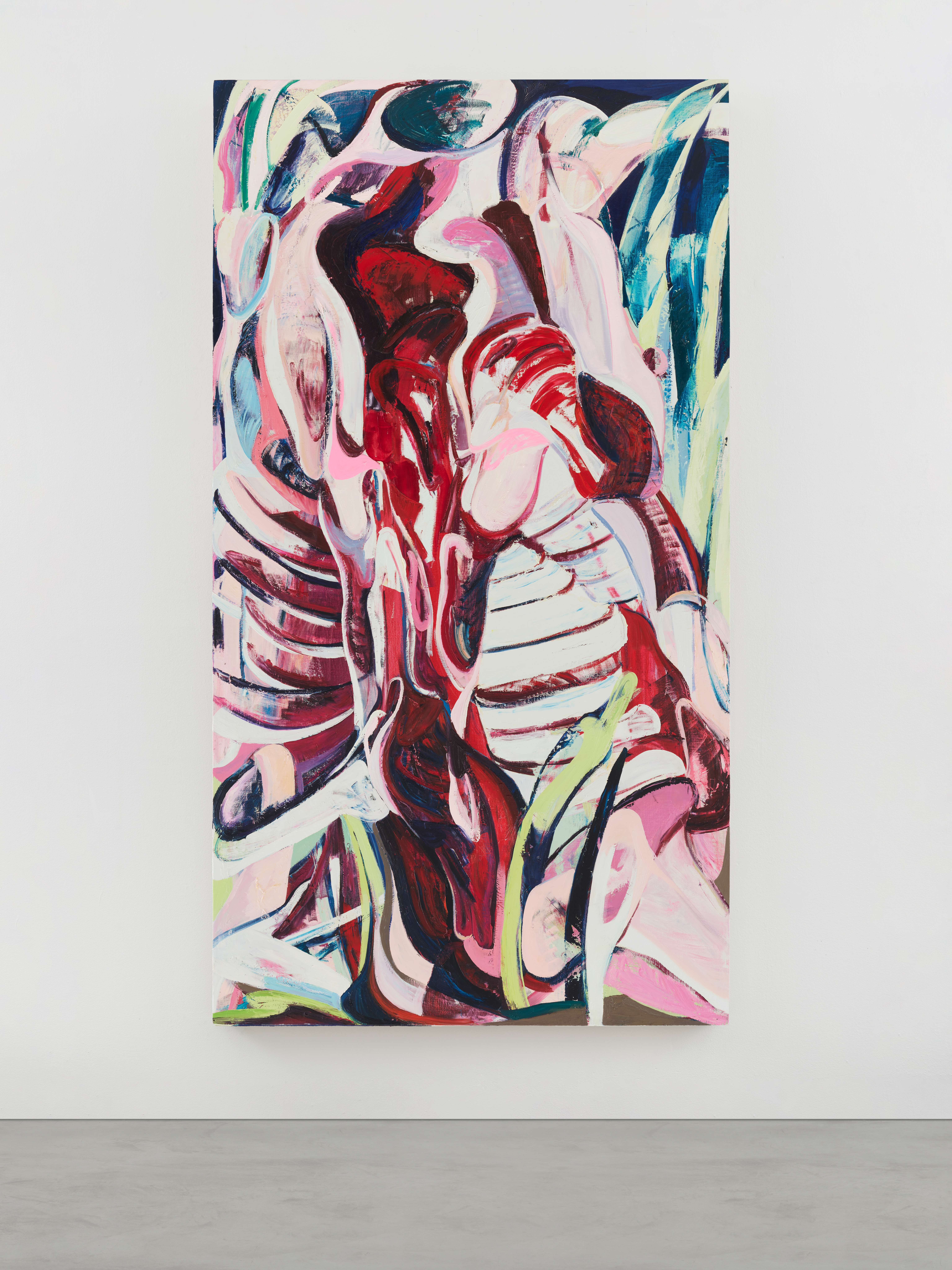 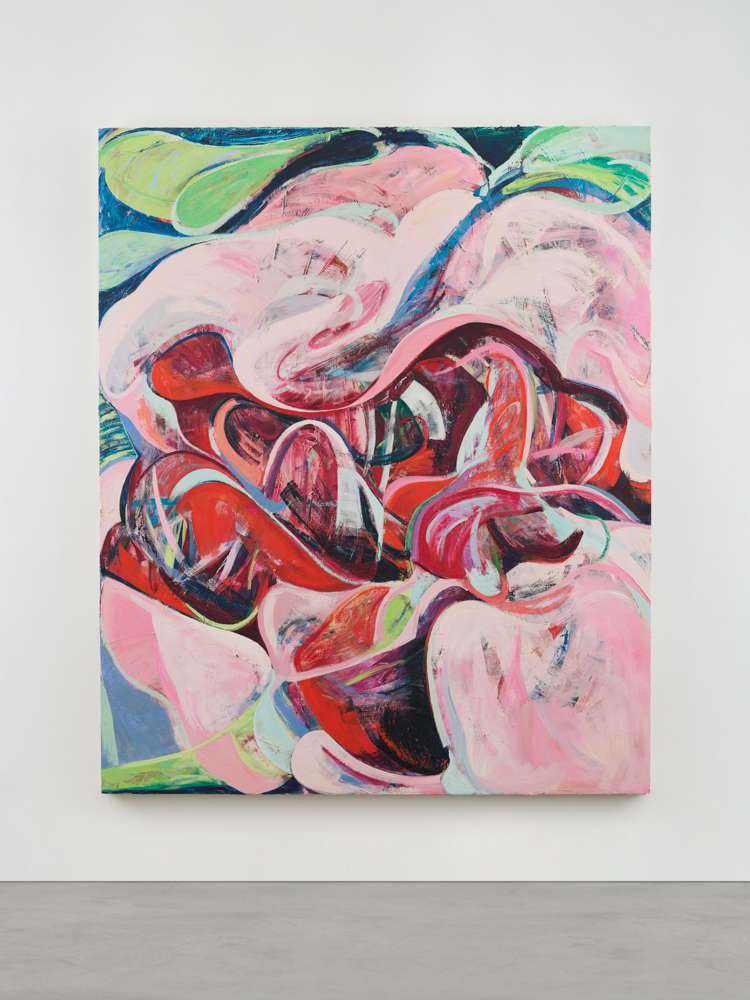 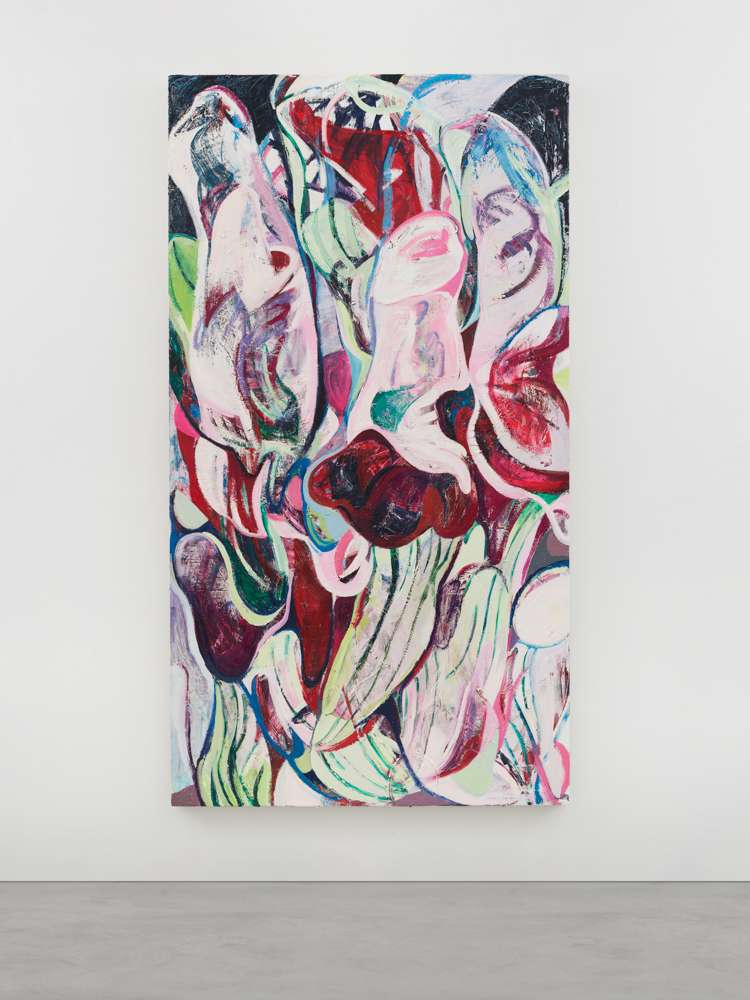 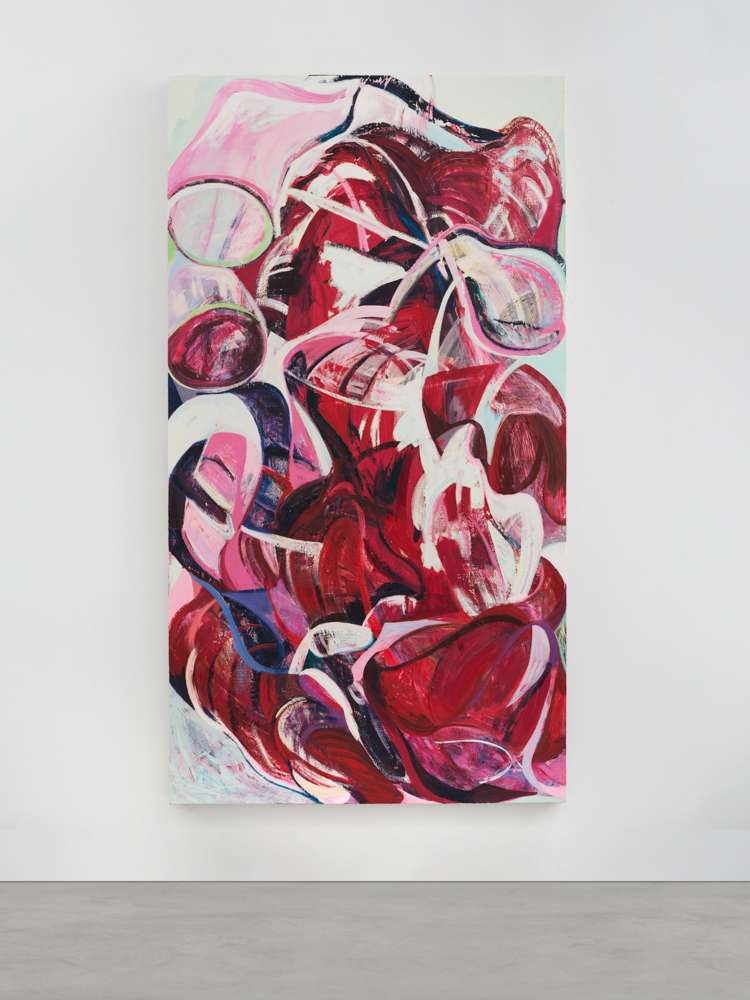 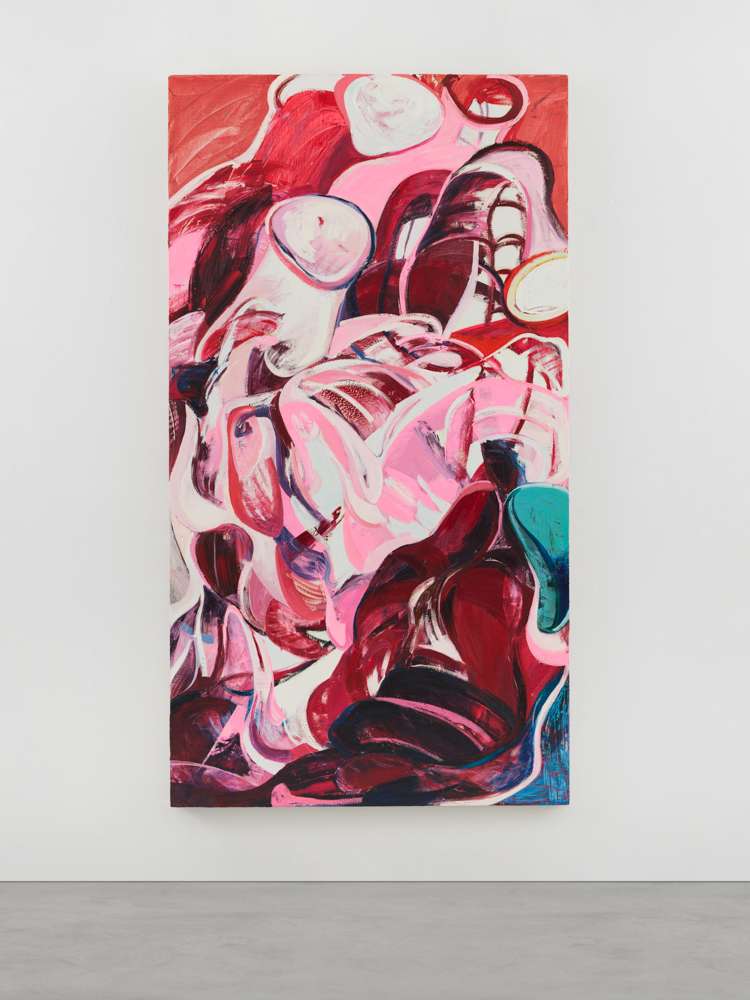 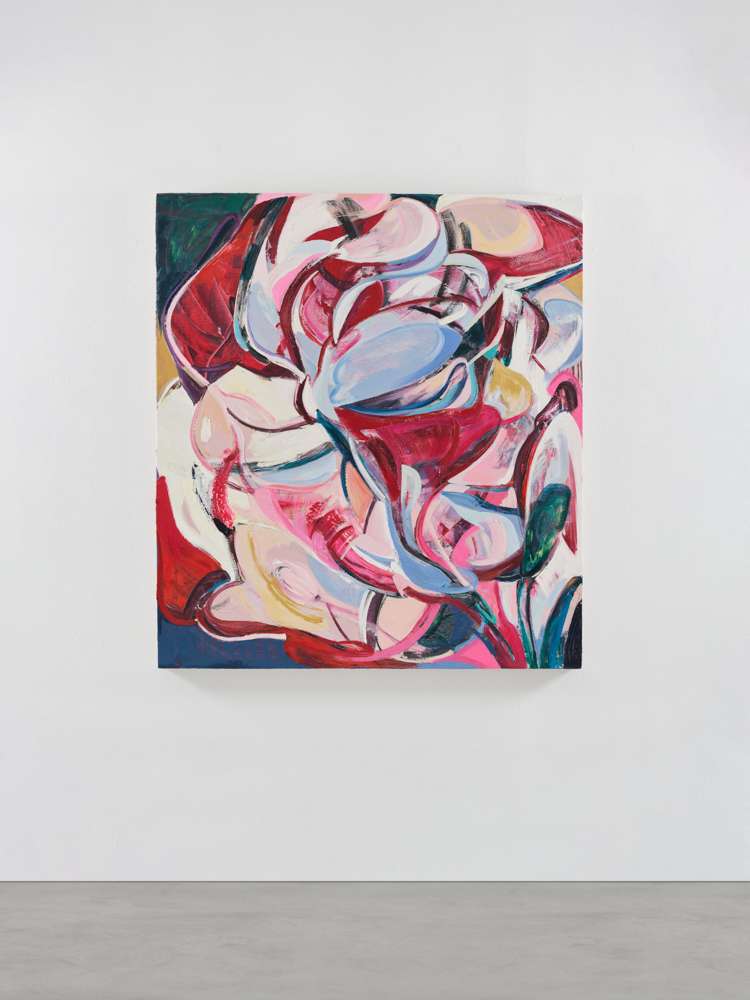 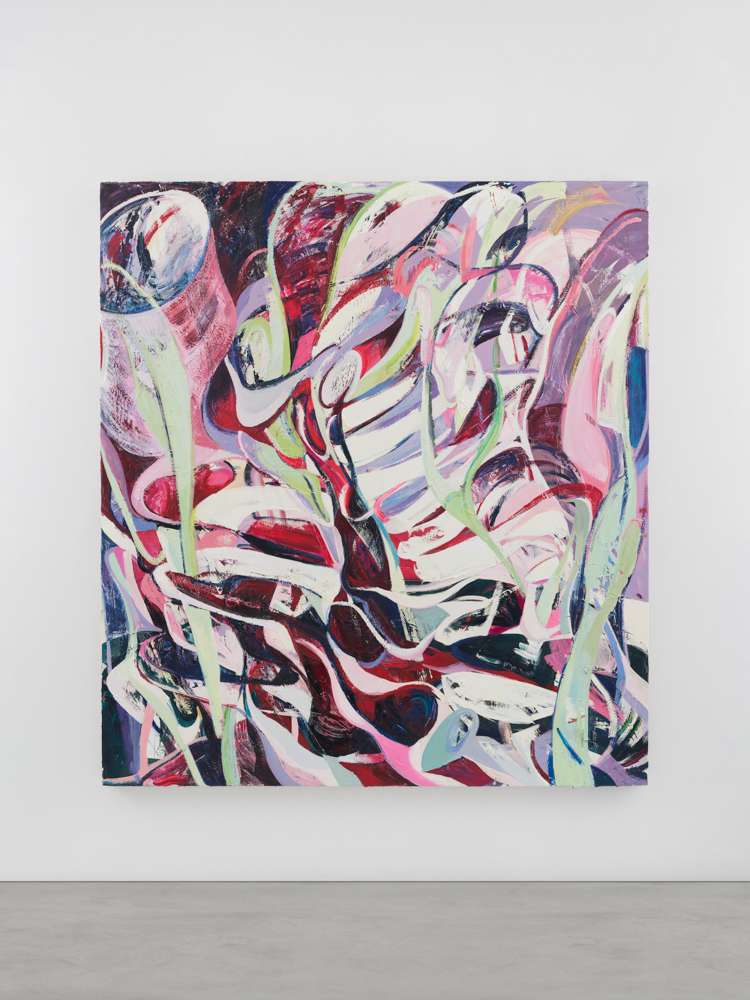 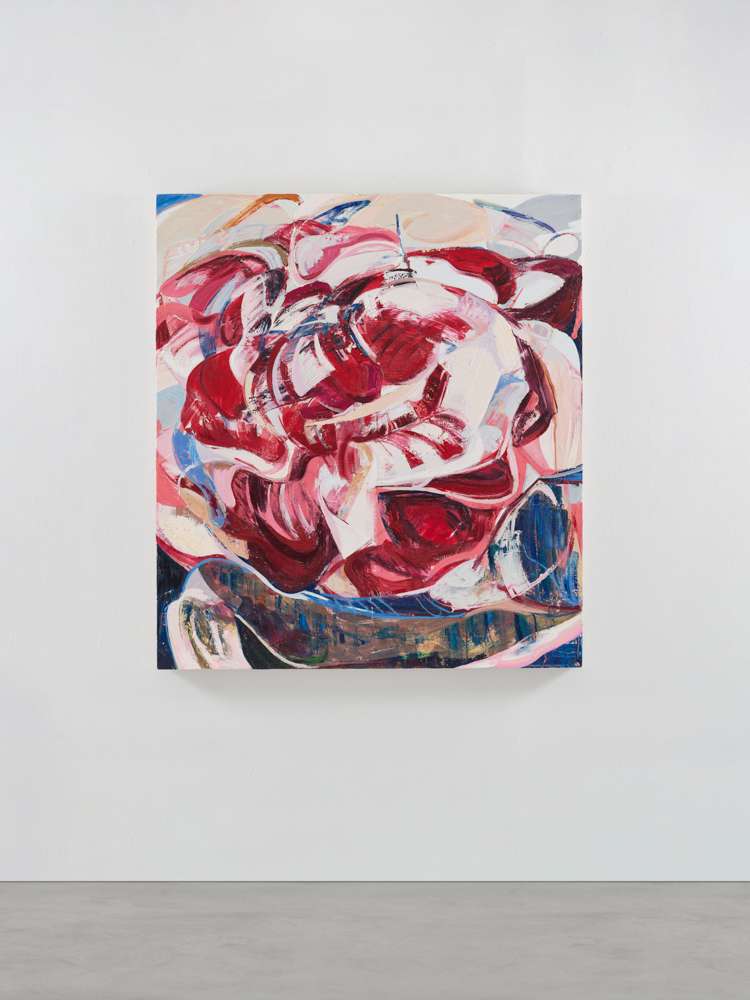 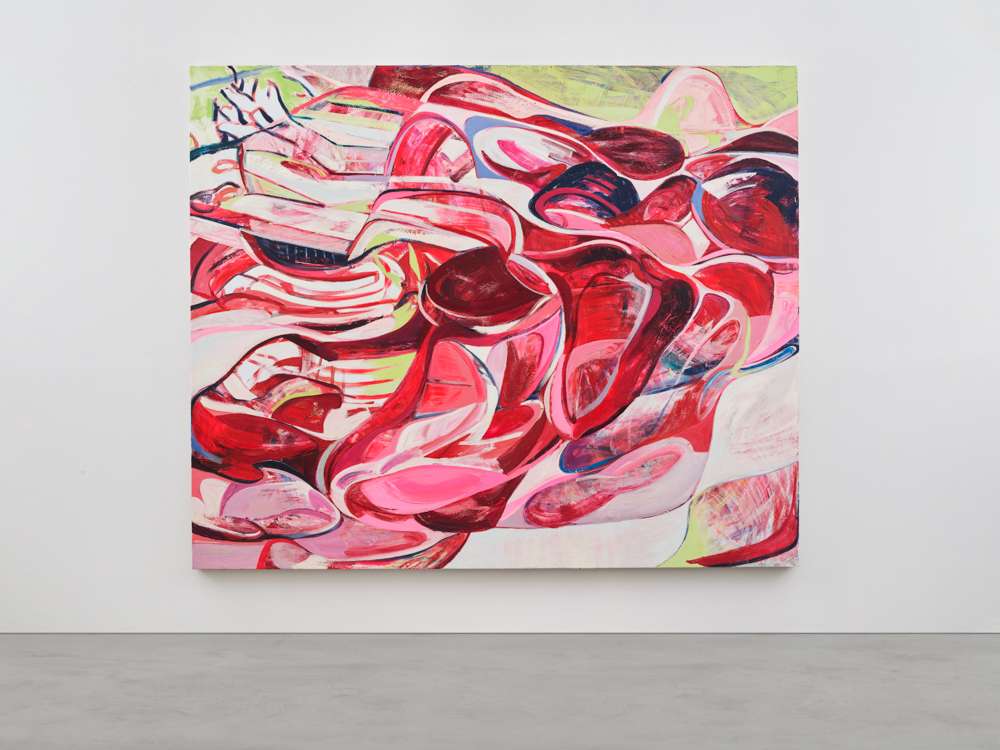 Meat and Flower by Danielle Shang

Human perception of the body is so acute and knowledgeable that the smallest hint of a body can trigger recognition. —Jenny Saville

For her debut solo exhibition Heart of Anchor in the United States and at Salon 94, Zhang Zipiao has painted ten large-scale oil-on-canvases, fraught with abstracted meat and flowers—as suggested by the titles—enlivened by lurid red, pink, and green. The work continues her exploration of an explosive palette and intertwined forms, as channels for raw emotion and restless energy. Zhang wholeheartedly embraces change and contingency. Her paintings are spontaneous, instinctual, and physical—she sweeps, smears, and scrapes pigments directly on canvases from edge to edge, often skipping preliminary sketches—rendering deconstructed flesh, butchered meat (a frequent visitor to her neighboring butcher), bodily fluid (blood, oil, tears, sweat, milk, and piss), evanescent petals and blooming flowers that twist and spiral into one. They prompt Francis Bacon’s notion of non-illustrational forms that work “first upon sensation and then slowly leak back into the fact.” ¹

Born in 1993 in Beijing, China, Zhang attended Maryland Institute College of Art (MICA) and graduated from the School of the Art Institute of Chicago (SAIC) in 2015, where the rich collection of modern and contemporary art housed in the institute’s Modern Wing made a profound impression on her. Among the masterpieces is Francis Bacon’s malerisch² Figure with Meat (1954), which depicts a nightmarish image of a seated, delirious man flanked by two sides of a split carcass with the rib cage forming a vault to encase the daunting figure. The metamorphosis of man into meat and vice versa dictated many of his later work, epitomized by his Three Studies for a Crucifixion (1962) that paid homage to Chaim Soutine’s Half-side of a Beef (1922-23).

Amid undulating lines and tangled forms in Zhang’s Battle field 01 (2021) and Floral Field 03 (2021), bloody carcasses and gruesome ribs are also visible. The rib cages are rendered with opaque white stripes floating on top of layers of various hues of crimson and blush, while cool green and lilac ribbons weave through, conjuring a sense of depth. As her paintings oscillate between abstraction and figuration, the set of bones here function less as a representational element, but more as a structural device that anchors the pictorial plane in the center. Other paintings in the show, however, are completely devoid of recognizable subject matter. A few, such as Peony 07 (2021) and Rose 02 (2021), curiously call to mind graffiti’s throw-up bubble style in their liquid curviness and bloated forms.

Heart of Anchor is a departure from the artist’s previous series of dissected juicy fruits, such as pomegranate whose oozy, red nectar reminded her of blood and whose shape of an organ; naturally, she then segued to depicting deconstructed, opulent flowers with the metaphorical representations of anatomy: sometimes isolated body parts, sometimes cleft meat and sometimes gushing wounds. Similar to Georgia O’Keeffe, Zhang detects in flowers something that lies at the limits of human comprehension. In her Peony 07 (2021) and Rose 02 (2021), for example, bodies and body parts—although their contours are barely perceptible—are transposed onto flowers, whereas in Pork Belly 01 (2021), blossoms are morphed back into a distorted mass of meat, swirling forward in the central foreground, nearly bursting into the viewer’s space from a dark penumbra on the bottom of the canvas. This duality affords the artist not only to capture life’s ephemerality before it withers with the pain of unrequited love but also to meditate on passion and suffering.

In comparison, Zhang’s garden of meat and flower is rampant with violently bent shapes and menacingly flamboyant colors. There is an undeniably symmetrical sensibility shared between her paintings and Tracey Emin’s stained bed sheets that aim at deconstructing fantasized femininity. The metaphorical gestures in both artists’s works are addressed to the body—the female body— as the locus of misperception, artificial desires and trauma, revealing a deep awareness, both intellectual and sensory, of how women’s bodies are sexualized and represented in society. Similarly, their works also provoke visceral and considered responses to the lovelorn angst and fleeting moments frozen in time, underpinned by personal experiences, events, and memory.

To an extent, Zhang’s paintings can be located between visual sensuality and an awakened feminist reasoning. If Barbara Kruger spells out “Your body is a battleground” in text, Zhang confronts us with the wreckage on the battleground with a visual wit in her Battle field 01 (2021) and Battle field 03 (2020). Looking at Zhang’s paintings underlined by Kruger’s agitprop aphorism, we cannot help but be affected by the visual pleasure that articulates the rapturous, albeit chaotic, pleasure of the flesh that is so threatening to patriarchal culture disguised in critical theories, such as distanciation—coined by Bertolt Brecht and reinforced by Pierre Bourdieu—that condemns pleasure as immoral contamination in discourses of “high” culture.

A kindred spirit with feminist body artists in the 1960s and 1970s, Zhang’s gesture transgresses the ideological sanctimony, as art historian Amelia Jones explains, “Explicitly playing out highly charged scenarios through the performance of female...bodies, the feminist body artists break down the masculinist critical prohibition of pleasure. As authors of and objects within their own works, they perform female artistic agency.” ³

However, we should not depend too much on the titles for deriving explicit meanings, and instead let ourselves be seduced by the lush brushwork, the immense scale, the delicious colors, and the intricate shifting between lure and grime. Each painting, with its loose and spontaneous quality, is larger than life and matched with pent-up energy that propels viscous blood, tumbling folds, voluptuous flesh, ripped organs, and deconstructed meat cascading from the canvas, like a simultaneously seductive, dissonant, and violent cacophony. If only her mark-making were more impulsive, and brushstrokes less uniform, the forbidden garden could be jazzed up even more with intensified polyrhythm and visual punch.

Zhang Zipiao: Heart of Anchor is on view by appointment at 1 Freeman Alley starting September 8th.