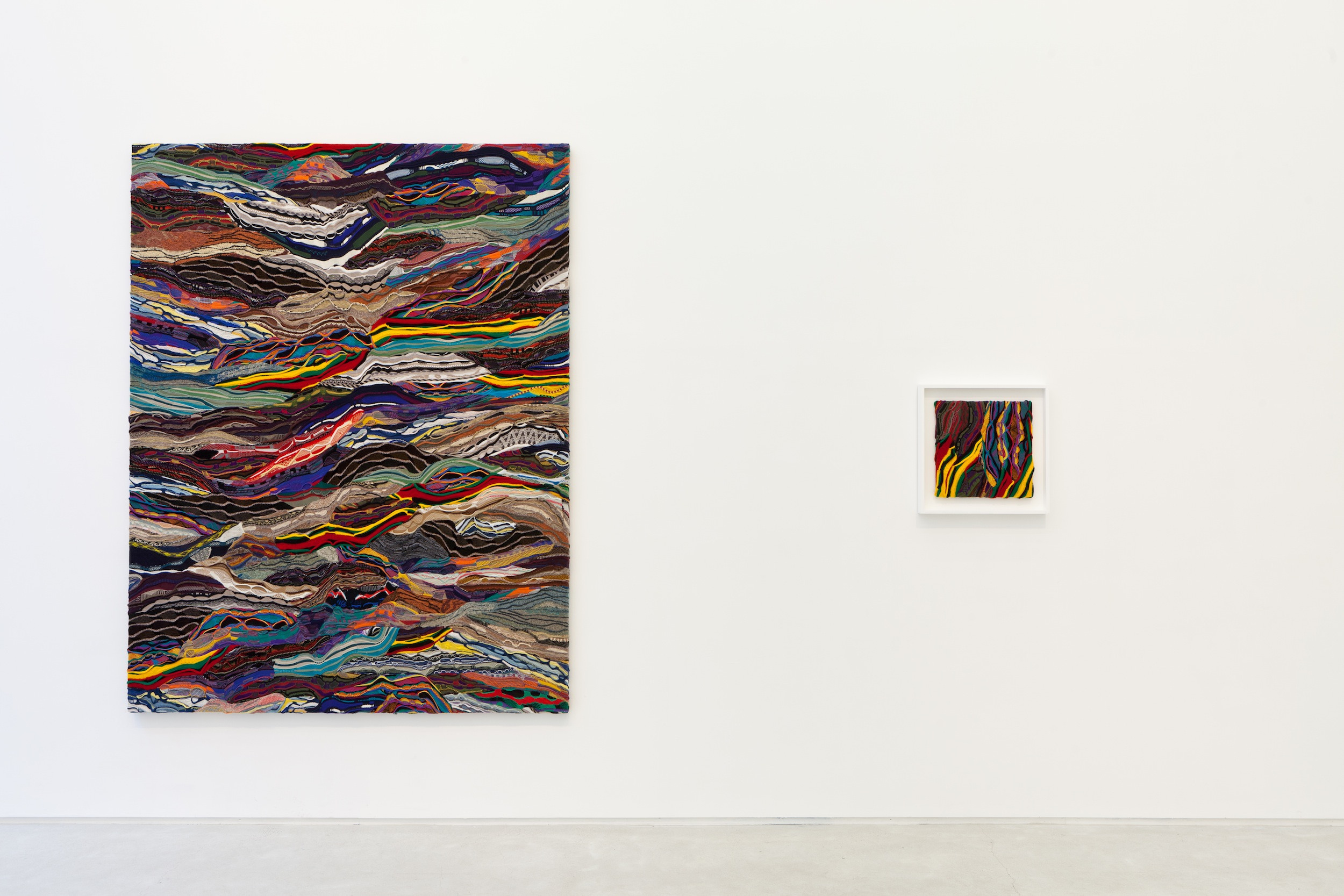 Jayson Musson: One spring night in 2011, while combing the internet, I came across an image of a hooded sweater made by Coogi, an Australian clothing company. Coogi brand sweaters are commonly known for their vibrant textured knits and most commonly conjure a generational association with Bill Cosby as Clifford Huxtable on The Cosby Show, or the late rapper Notorious B.I.G. of Bed-Stuy, NY. As someone raised on rap music and its signifiers of status, Coogi sweaters always possessed a kind of peculiar allure - the garments revered as a status symbol.

The thing I found most alluring about Coogi sweaters was how painterly they were. They seemingly lingered on the borders of gestural abstraction. I made the joke, "That Coogi looks like a Pollock". Over the course of the following weeks, I began collecting images of the sweaters, studying their composition. They seemed to defy the traditional logic of the textile, opting instead to appear spontaneous and created by hand rather than machine-made. Each sweater, though a manufactured object seemed to seek its own authenticity. Even the old Coogi slogan "Wearable Art" seemed to confirm the desire for each sweater to be considered an objet unique, a specialized commodity.

It was then that Jayson Musson decided to aid the sweaters in their quest toward an artistic purity by disassembling them and reconfiguring them into larger "paintings". In this simple inversion, Musson (in the likes of a Rosemarie Trockel knitted painting, Anni Albers textiles, or a Warhol Brillo Box) delivers the manufactured sweater back to its original place of inspiration, an idealized abstract artwork. This show celebrates this backdoor approach to finding and critically discussing abstraction.

The artist then wondered about the purity of modernism.

JM: Is this a tainted endeavor? Is it possible for one to inhabit the singular and monolithic and pure through this 'reverse engineering' of a commodity? Halcyon Days refers to a general sense of nostalgia. We keep revolting against the art object, yet it persists. My paintings refer to a continued love/need/dominance of painting throughout history despite painting's many wonderful deaths. I also refer to a second nostalgia, one that belongs to people of my generation who look back at the late 80s and early 90s as the Golden Age of hip-hop, those who sometimes have a hard time greeting the evolving face of black music and culture. Ultimately, I am suspicious of any form of nostalgia as it represents a paralysis that idealizes the past, compromises the present, and transforms the unfolding future into the production of returning to a past that never existed.

Musson then laughs. This is his first body of work that is not text- or explicitly humor-based, but rather visual. He has envisioned paintings in elegant monochrome and joyous Technicolor. Composed on the floor, they are all over paintings with thread and needle rather than paint. After all, it began online, and with a sale on Twitter.

Jayson Musson works in a variety of mediums: painting, photography, video and more. Using the alter ago “Hennessy Youngman,” he has produced a series of online video segments entitled Art Thoughtz that have become viral sensation. A native New Yorker, Musson received his Bachelor of Fine Arts in Photography from the University of Arts, Philadelphia and his MFA in Painting from the University of Pennsylvania, Philadelphia. Jayson Musson lives and works in Brooklyn, NY. Halcyon Days is his first show with Salon 94. His work can be viewed online at www.salon94.com and www.jaysonmusson.com.

ART THOUGHTZ: How to Make an Art