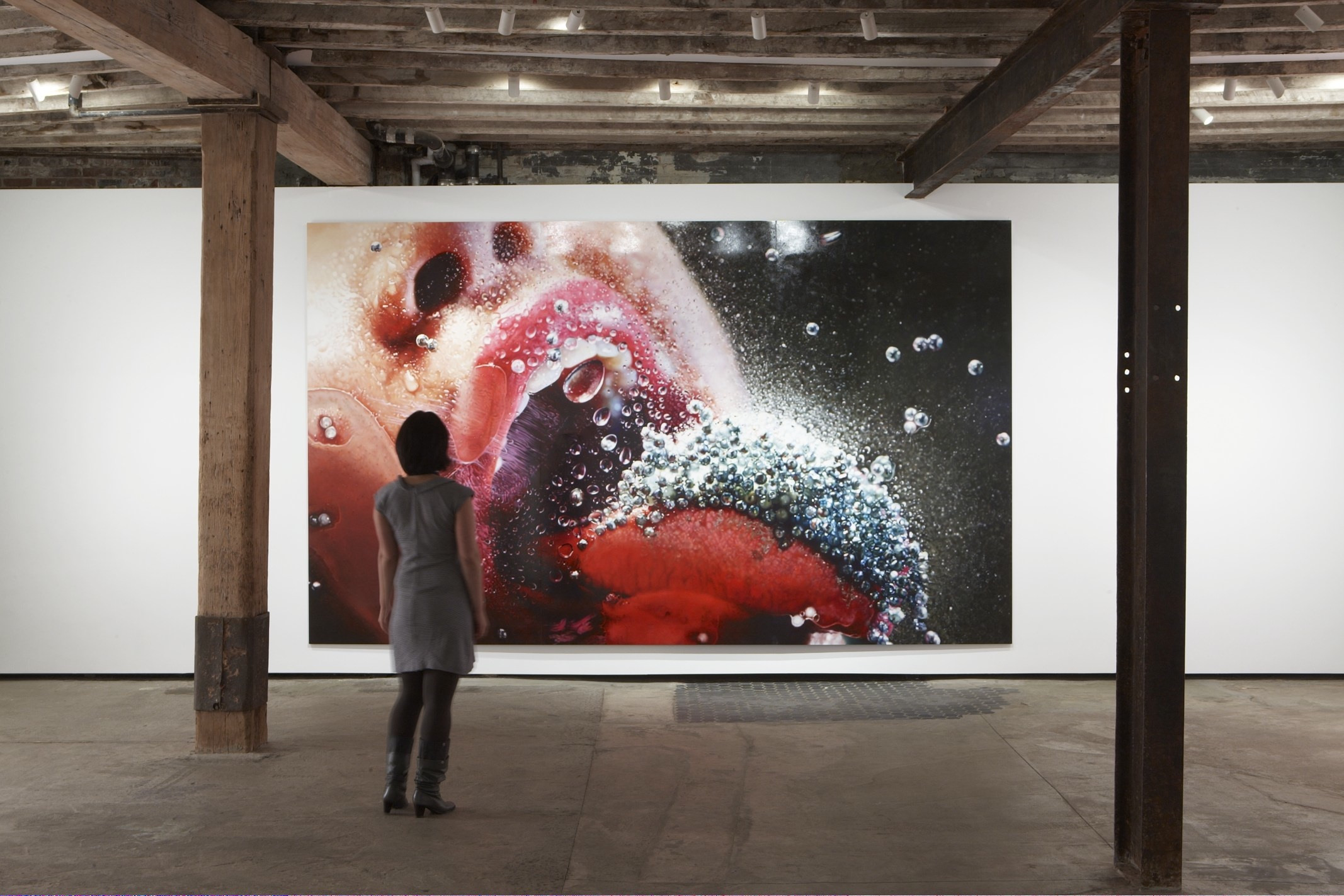 Salon 94 is pleased to present Green Pink Caviar, an exhibition of new paintings and photographs by Marilyn Minter. This is the artist’s second solo exhibition at the gallery. Continuing her examination of glamour and its underbelly, Minter juxtaposes photorealistic paintings and painterly photographs, which hone in on the moment where clarity becomes abstraction and beauty commingles with the grotesque. In Minter’s world, the body is cast as a site of aggressive desire. Tongues covered in glittering candy attempt to push beyond the picture plane and enter the viewer’s space. An androgynous nipple is menaced by a snake tattoo and adorned with pearls, and a freckled, made up model blows a bubble that is about to burst.

In Pop Rocks, Minter’s largest painting to date, as well as in several photographs, Minter explores the idea of painting with the tongue. To achieve these works, she directed her models to lick brightly colored candy on a sheet of glass and then photographed them from the other side. The tongues mixed the “paint” with saliva, slurping and pushing the color around the glass surface. This concept of painting with the body mimics Minter’s own technique of finishing her highly glossy surfaces with her fingers.

Marilyn has always been interested in blurring the boundaries between commercial and high art. She has shown her photographs as billboards, aired a commercial on late night television, and done fashion shoots in which she subverts cultural ideals of beauty and sexuality. Concurrent to our exhibition, her directorial debut, also entitled Green Pink Caviar will be screened at 44 1⁄2, Creative Time’s presentation of video art in Times Square as a part of Chewing Color. The video will be presented as a trailer to midnight movies at the Landmark Sunshine Cinema on Houston Street. For more information on the video, including screening times, please visit www.greenpinkcaviar.com.

Marilyn Minter was born in 1948 in Shreveport, Louisiana, and lives and works in New York. She received her Bachelor of Fine Arts from the University of Florida in 1970 and a Masters of Fine Art from Syracuse University in 1972. Recent exhibitions include the 2006 Whitney Biennial, SITE Santa Fe, Fotomuseum Winterthur, and a solo exhibition at San Francisco Museum of Modern Art. She will be the subject of a solo exhibition at the Contemporary Art Center Cincinnati in September 2009.