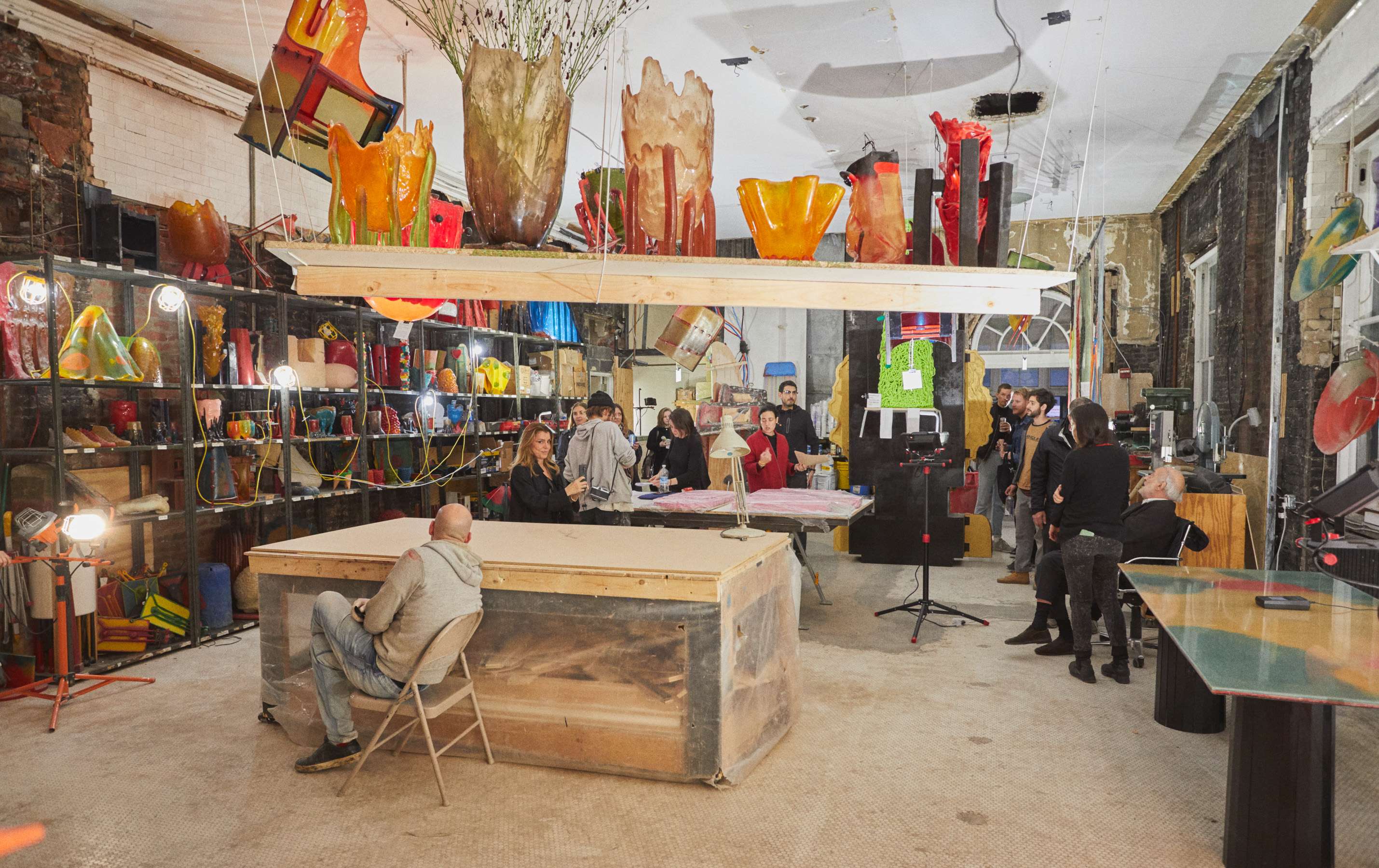 I don’t know how the experience will end. That is very important, I would say, because it is a way to discover. Otherwise you repeat what we already know. — Gaetano Pesce

For over sixty years, Gaetano Pesce has been dedicated to the principle of research and innovation. Now, he will stage his most extreme realization of this idea, relocating his studio to Salon 94 and Salon 94 Design’s new space on 89th Street. This will allow Pesce, a pioneer of design practices who has continuously researched and experimented with process and materials, to conduct his restless experimentation in the public eye, in direct engagement with his audience.

This gesture has deep roots in Pesce’s practice. In the 1960s he was active as a performance artist– on one memorable occasion filling an entire auditorium with fake blood, and on another, promising to make a portrait for anyone in attendance, and then simply presenting them with a mirror. Deeply involved, and one of the first in the field, in researching modern materials, notably polyurethane and other synthetic materials, he has made work that inflates, is draped over armatures and allowed to harden, or that incorporates free drawing by factory workers. In preparing for this new presentation, he has developed a resin chair, entitled Nobody’s Perfect, which he characterizes as “a little creature, sweet, intriguing and changing from chair to chair.” Like many of his designs, it has an evident figural form, which Pesce sees as a means of communication (as opposed to the non-narrative forms of geometric abstraction). Versions of this chair, as well as other recent works, will be on view in the space.

During regular gallery opening hours, his assistants will be at work as they normally would: preparing molds, pouring resin, hand finishing, and other processes. Pesce will be present personally at various times. The intention is to “transfer the atmosphere” of the working shop, with its sounds, machines, and urgent, improvisatory energy. “It is a beautiful idea,” Pesce says, “to give visitors the idea of what it is to create. It is not only me having an idea, it is also realization. We will show what it really means to create an object.”Born in La Spezia, 1939, Gaetano Pesce studied architecture at Venice University. Gaetano Pesce, architect, artist, and designer, has created public and private projects worldwide, in the fields of architecture, town planning, interior design, and industrial and exhibition design. In Pesce’s production, the borders between art, design, and industry become irrelevant because art is also a product, it is the creative reply to the needs of the times we are living in.

Pesce’s works have been celebrated in exhibitions of outstanding importance, such as, Italy: The New Domestic Landscape held at the MoMA in 1972; a solo show in the Goodwin Gallery of MoMA in 1977; the retrospective Gaetano Pesce: Le Temps Des Questions, organized in 1996 in the Centre Georges Pompidou; Pushing The Limits, held in the Philadelphia museum of art in 2005; Gaetano Pesce: Il Rumore del Tempo, at the Milan Triennale, also in 2005; The Retrospective il Tempo Della Diversitá, at the MAXXI in Rome in 2014, and the retrospective II Tempo Multidiscilpinare in Padua in 2018.WORKINGALLERY opens on Friday, October 25, 2019 from 6pm-8pm, and will operate daily between 10am - 6pm, until November 2nd, at 3 E 89th Street, Gaetano Pesce will be performing daily between 4pm - 6pm. To visit the workshop email the gallery at info@salon94design.com\, this event is by appointment only.

A closing performance for Gaetano Pesce: WORKINGALLERY will be co-presented by Performa and Salon 94 Design for the Performa 19 Biennial on Nov 2nd from 4-6PM