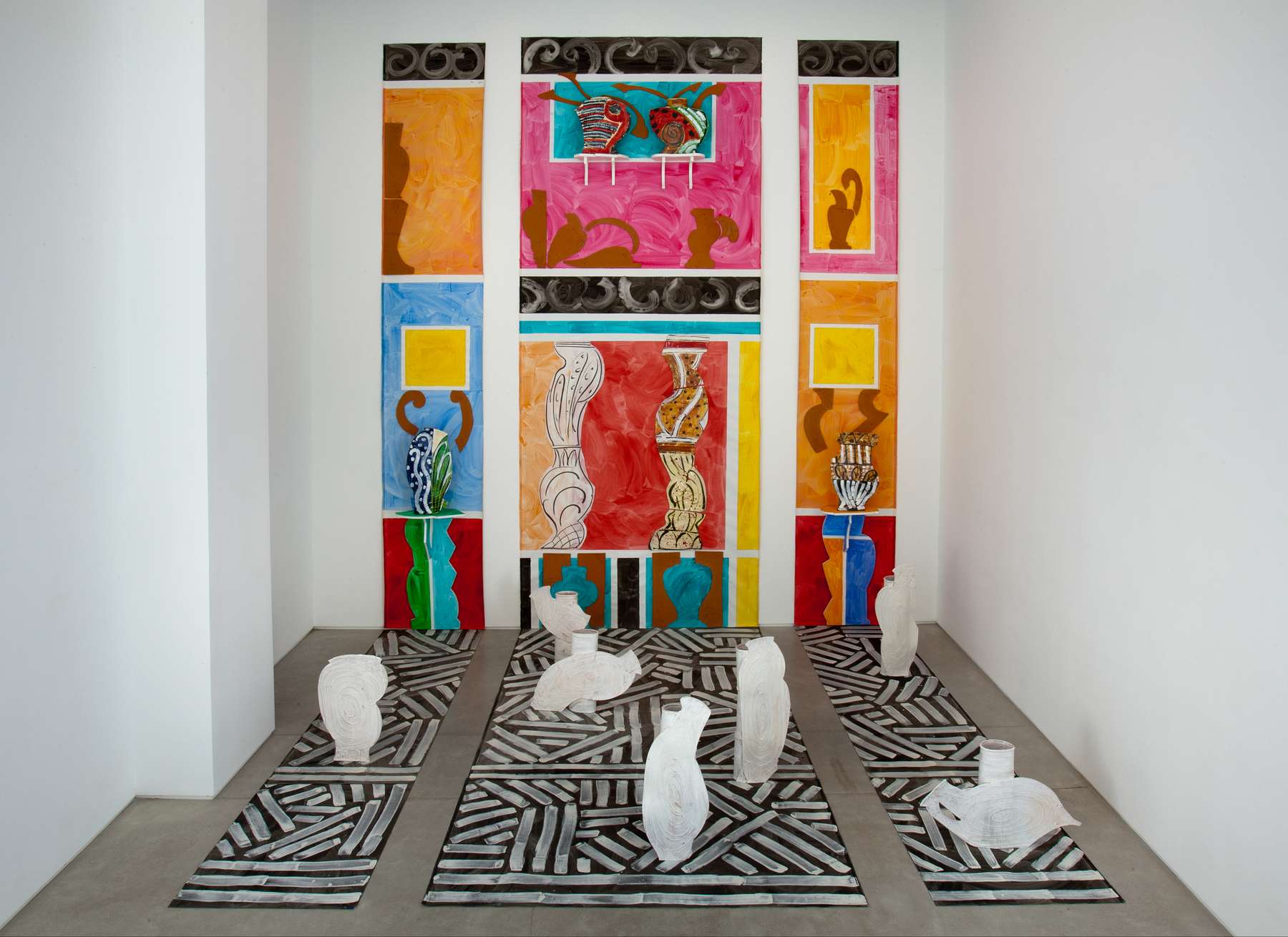 Woodman’s vases are vases. But, they also are paintings of vases on vases. Her generous sized vessels, many with winged panels, provide surfaces for paint.

For almost 50 years, Betty Woodman has blurred the border between craft and high art, art and decoration, ignoring conventions of form and function. Today, Woodman's dualities are accepted, and we enjoy her vases for their complexity. It is thus with great pleasure that Salon 94 presents Front/Back- new work by the renowned Betty Woodman.

Woodman’s vases are vases. But, they also are paintings of vases on vases. Her generous sized vessels, many with winged panels, provide surfaces for paint. Scavenging imagery from ancient Greek and Etruscan ceramics, Japanese woodcuts, Korean folk painting, modernist painting, architecture and fashion, Woodman marries painting and sculpture into her exuberant sculptures.

The centrality of the vase in my work is certainly a reference to a global perspective on art history and production. The container is a universal symbol—it holds and pours all fluids, stores foods, and contains everything from our final remains to flowers. The vase motif connects what I do to all aspects of art. I can mix the motifs of a classic Greek vase on one side of a triptych with the details of a Japanese print on the other all conveyed with a palette based on the hues of a recollected Hindu temple. — Betty Woodman, 2010

On one side of the sculptures there are paintings of nudes, flowers and Japanese ladies in kimonos. These motifs are depicted in a deliberately casual way, with broad, loose expressionistic brushstrokes. The front and back of the vases do not correspond- for each figurative front there is an abstract back. Incongruous and playful, the duel sides never match. Ever present is the image of the vase itself painted on the vessel, plus the possibility of seeing an image of a female figure. Their backs bare, extremely simplified often exposing the clay beneath.

Shown alongside the two sided vases are three large works from her ongoing Aztec Vases series, which are four sided vases with complicated shifts in spatial reading. Also shown as dramatic backdrop, Sunset (2010), is a two dimensional canvas and ceramic installation relating the composition of Japanese screen painting, to Bonnard's private world of interiors and windows.

The work of Betty Woodman (b.1930, Norwalk CT) been collected in over 50 museums around the globe, including the Metropolitan Museum of Art in New York, the Museum of Modern Art New York, the Stedelijk Museum Amsterdam, and the Gulbankian Museum in Lisbon. The Gardiner Museum in Toronto is showing Woodman s porcelain work until Summer 2011 and in March 2012 she will curate the exhibition Playing House at the Brooklyn Museum.