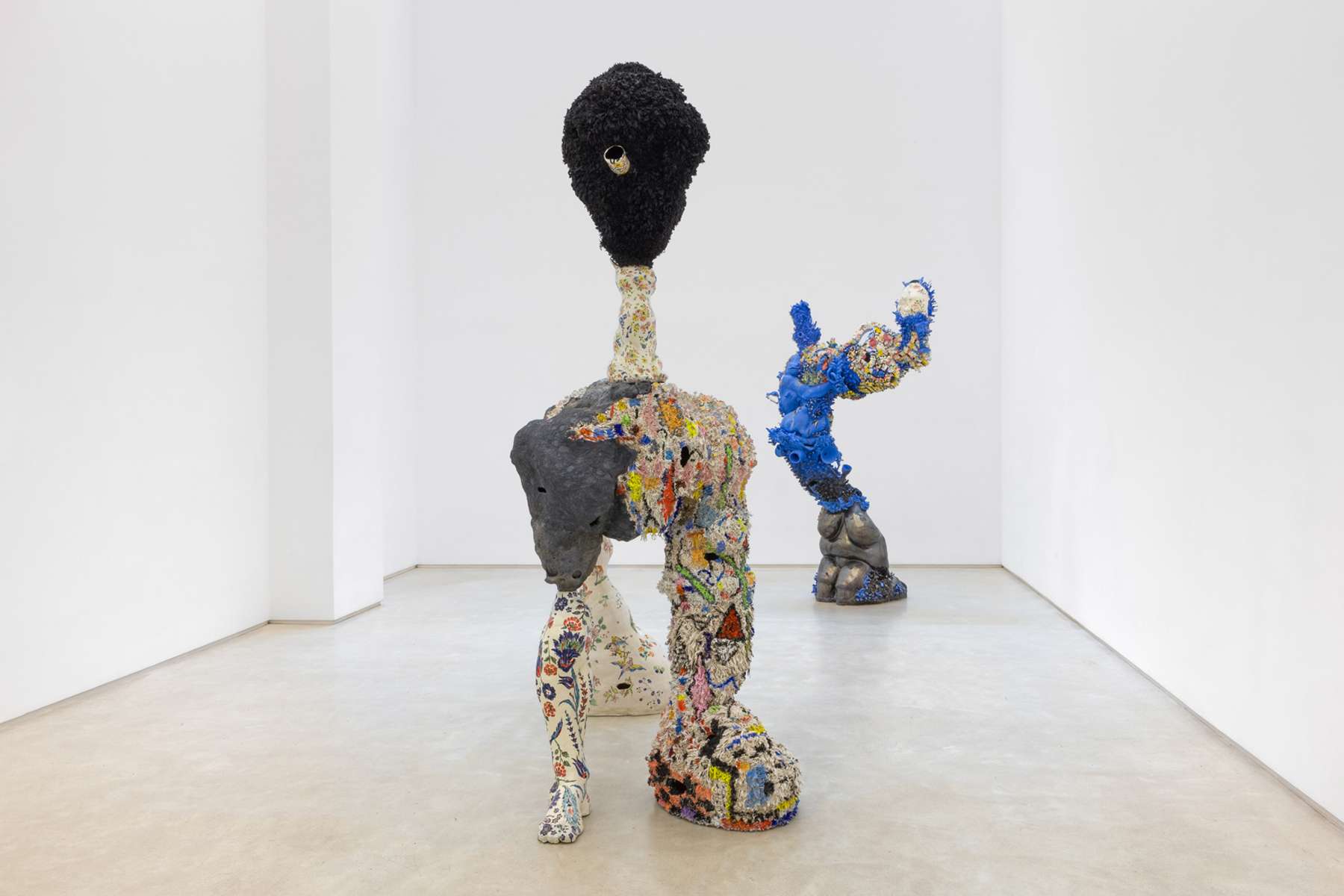 Francesca DiMattio returns to the aesthetics of craft for inspiration, metamorphosing traditional techniques and imagery into mad-cap mise en scenes.

What is the contract of a copy? How does a reproduction shift meaning? Monet’s waterlilies are at once associated with a Kleenex box and to MoMA. I love how a reproduction can reroute the value system, pointing out an image's inherent instability. That’s in part why I was drawn to porcelain. It’s development can be mapped through the copying from one culture to another- a history of hybrids: a Dutch version of an Asian scene, the white glazed clay cup faking porcelain, etc. I am most attracted to such dueling combinations.

Salon 94 is pleased to present an exhibition of new paintings and monumental ceramic sculpture by Francesca DiMattio. In her fifth solo exhibition at the gallery, DiMattio returns to the aesthetics of craft for inspiration, metamorphosing traditional techniques and imagery into mad-cap mise en scenes. Boucherouite, the exhibition title, refers to the rag rugs traditionally made from torn and reused clothing by Berber women in North Africa. In a nod to their improvisational and idiosyncratic style, DiMattio shreds and weaves together images from many centuries and cultures, turning them into a new hybrid form.

Included in the exhibition are three seemingly impossible towering ceramic sculptures. In these works, DiMattio fractures and reconfigures a wide array of references; she borrows from art history, children’s books, cartoons, pop culture, and craft. Though elements seem ready-made, she sculpts and paints everything by hand. As the works extend upward, they become more complex and multifaceted—each angle revealing seemingly endless experimentations in ceramic and glazing techniques. Throughout each assemblage, DiMattio’s layering and fragmentation maps a crucial dialogue between cultures and styles, pointing to the plasticity of representation. Through shifts in scale, elements that are typically accents become primary. Things do not behave as expected. Tiny figurines appear over scaled, floral motifs become viral, and torsos morph from flora and fauna.

Extruded colorfully painted clay, mimicking the thick hi-pile texture of boucherouite rugs visually connect each sculpture. In Venus I, a feminine Ancient Greek figure is enveloped by a rug—on its reverse a cascade of breasts à la Louise Bourgeois. The bust’s hands hold a phallic vase adorned with Ming dynasty porcelain detailing from the 16th century. In Venus II, a giant panda’s backside is a goddess. Extending upward are a mass of protruding steel nails that echo those found in Nkondi fetish sculpture. At the top of the work, a masculine Roman bust is encrusted in DiMattio’s signature floral detailing. Each work is both masculine and feminine, ancient and contemporary, animal and human.

The exhibition also includes two paintings that are similarly layered and non-hierarchal in their imagery. In The Octopus and The Fish, mountains from a traditional Japanese shunga print appear in one corner while verdant grass from a Curious George illustration grows in another. Roman mosaic tiles mix with a flat pink floral textile print taken from a thrift-store dress. Each fragment is interrupted by another: a hand from Goya’s 1810-1820 etching series Disasters of War, a tentacle of an octopus, and Cinderella’s castle. At the center of the composition of The Fox and The Hound, a reclining dog from the 1981 Disney film, lounges on the exaggerated skirt of the Infanta Margaret Theresa from Velázquez’s painting Las Meninas, 1656. An inherent sweetness is present amidst the dissonant visual noise; an underlying nostalgia permeates the canvas. DiMattio compresses time by pulling images that span centuries and cultures. Her work playfully and irreverently calls into question notions of beauty and kitsch, the “exotic” and the domestic, history and nostalgia, seriousness and levity.

Francesca DiMattio (b. 1981) lives and works in New York. Solo exhibitions include “Francesca DiMattio: Housewares,” at the Blaffer Art Museum, Houston in 2014 (catalogue) and “Vertical Arrangements,” at the Zabludowicz Collection, London. Her work is in the permanent collections of The Perez Art Museum, Miami, FL, The Frances Young Teaching Museum and Art Gallery at Skidmore College, Saratoga Springs, NY, The Saatchi Gallery, London and The Zabludowicz Collection, London.