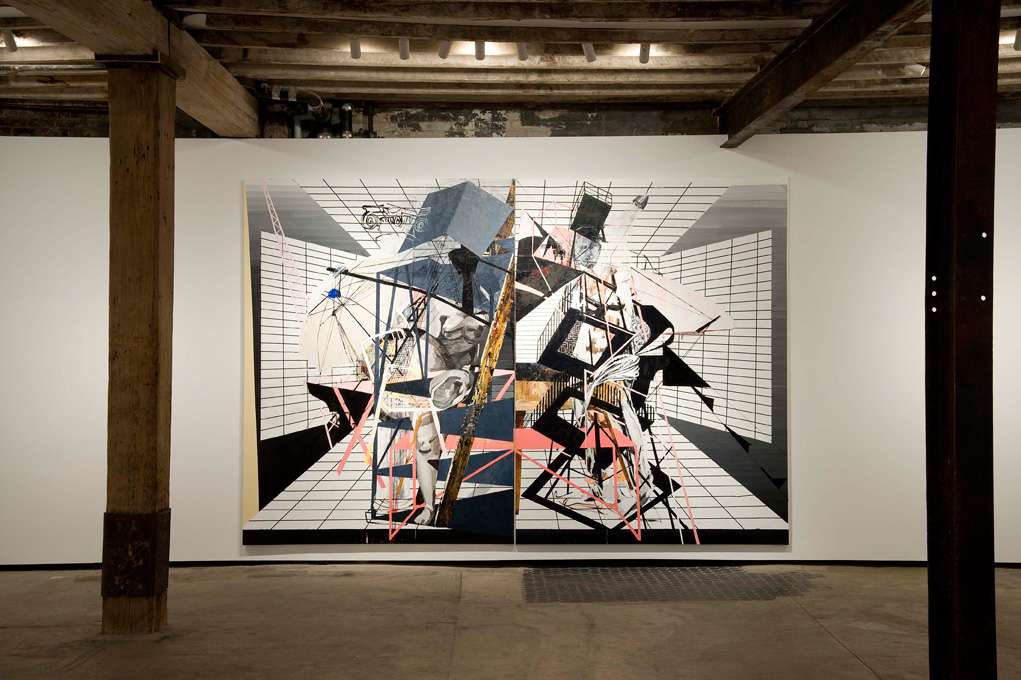 Salon 94 is pleased to present a two-part solo exhibition by New York based painter Francesca DiMattio. This is the artist’s second show with the gallery, following New Work in 2006. At Salon 94 Freemans there will be four large paintings depicting sculptural figures in fantastic architectural spaces. At Salon 94 she will show several small studies of heads.

In her large paintings, DiMattio creates a space in which architectural forms, sculptural figures, birds, modernist chairs, ladders, and other elements collide and become entangled. As she has in the past, DiMattio’s paintings contain both art historical references from classical sculpture to Bacon and quotidian items such as quilting, lace, and linoleum kitchen tiles. Each element is given equal weight, radically altering traditional hierarchies of value. The architectural settings in the paintings are stage-like; there is an illusionist floor and a backdrop of immediately receding one-point perspective in which the action unfolds.

DiMattio’s introduction of the figure in these paintings is a departure from her earlier work. The figures are culled from various periods of art history: Roman sculpture is present, as is the Italian Baroque as she quotes Artemesia Gentileschi’s famous version of Susannah and the Elders. Rather than presenting a coherent narrative, however, the figures are fragmented, broken, and interrupted. They do not retain their gravity as the artist cuts through them with chairs, lace fabric, and abstract lines. Other paintings feature a pared down palette of red, black, and white. In White Out and Black Out, the canvases become palimpsests, as she uses large monochromatic expanses to obscure other thickly applied passages to create new and ghostlike forms.

DiMattio is interested in creating a sense of slippage in her paintings. She vacillates between abstraction and figuration, never settling for one or the other. The objects in her paintings never quite remain discreet; they morph and converge in often disturbing ways. She invites the viewer in with easily identifiable, seemingly benign chairs and lace patterns, only to disrupt the visual framework and sense of order. In a seductively logical, organized vision the viewer is forced to question the reality of the visual – and of painting itself.

Francesca DiMattio (b. 1981) lives and works in New York. She has had solo exhibitions at Salon 94 and LAXART. Her work is in the collection of the Miami Museum of Art. Concurrent with this exhibition is the publication of the artist’s first catalogue, featuring a conversation between DiMattio and painter Amy Sillman.