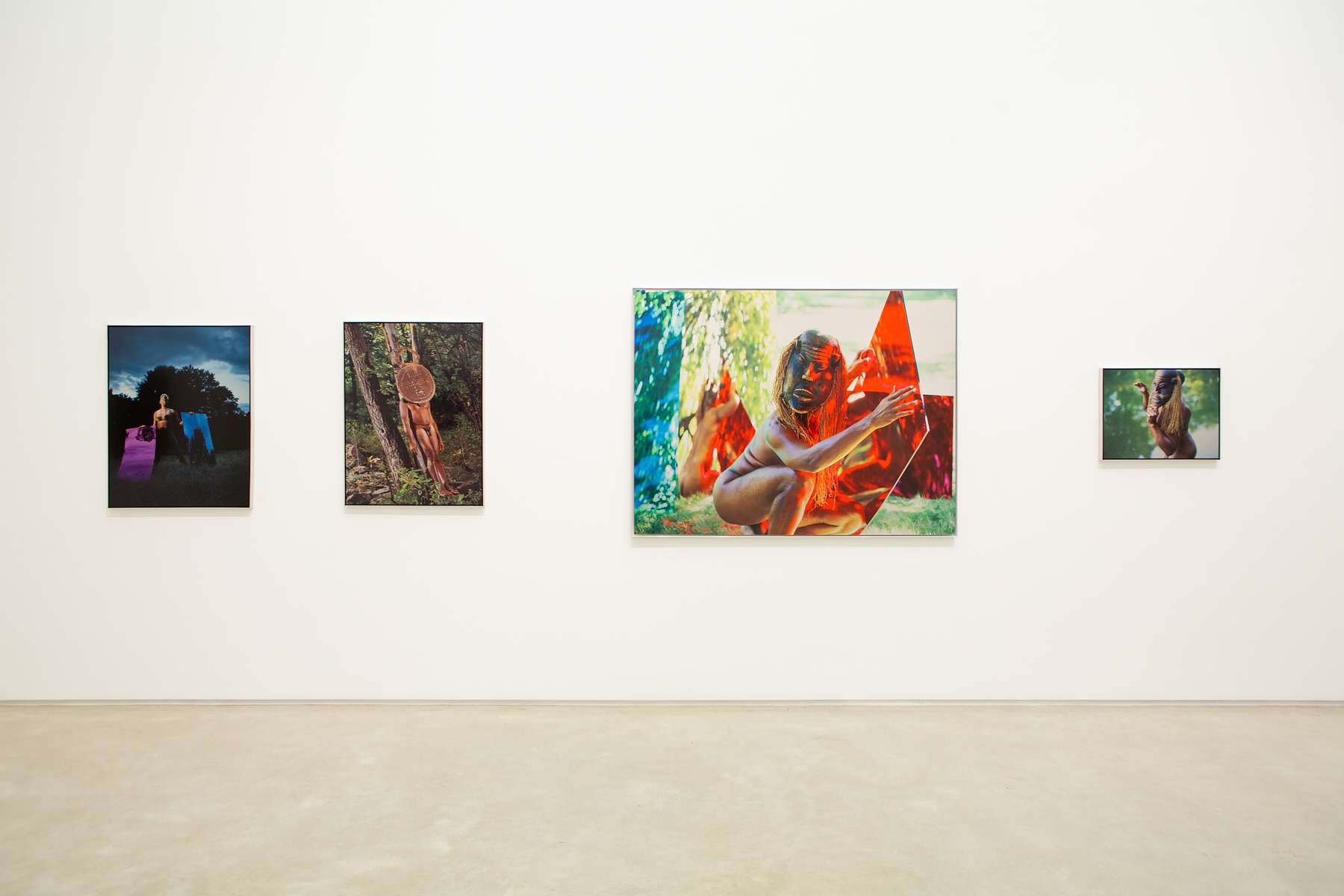 With Lyle Ashton Harris’s inaugural show at Salon 94, a performance of another sort has begun. The fifty-three-year-old artist returns to self-portraiture, unabashedly claiming his place as an artist for whom sexuality, race, gender, ethnicity, class—and now aging—continue as core engagements.

​“How long will I continue to play the game of mastery of the false self? When will the performance end? I long for that.” — Lyle Ashton Harris, statement from MFA exhibition, California Institute of the Arts, 1991

“The mask sits on him in the picture the way he concludes a string of run-on sentences with a final simple sentence, and then is still for a moment. And it would seem that with the final sentence you have heard everything, but in fact you have not heard everything. In fact, you are just beginning to hear, and all you hear is the silence. And so he sits in the mask. [. . .] No matter how much he shows you, you will want to see more, and no matter how much he shows you there is a lot more stuff that he can keep to himself behind the mask.” — Anna Deavere Smith, excerpted from her essay published in Lyle Ashton Harris, 2004.

With Lyle Ashton Harris’s inaugural show at Salon 94, a performance of another sort has begun. The fifty-three-year-old artist returns to self-portraiture, unabashedly claiming his place as an artist for whom sexuality, race, gender, ethnicity, class—and now aging—continue as core engagements. To enact this series, Harris sought a plurality of masks, several borrowed from his family's collection of African masks belonging to his uncle, Harold Epps, who traveled throughout West Africa in the 1960s. Growing up in both the Bronx and East Africa, Harris often encountered such masks, which have embedded themselves into his identity. In their reanimation, his mythopoetic portraits aim to recharge and reclaim these familial objects. 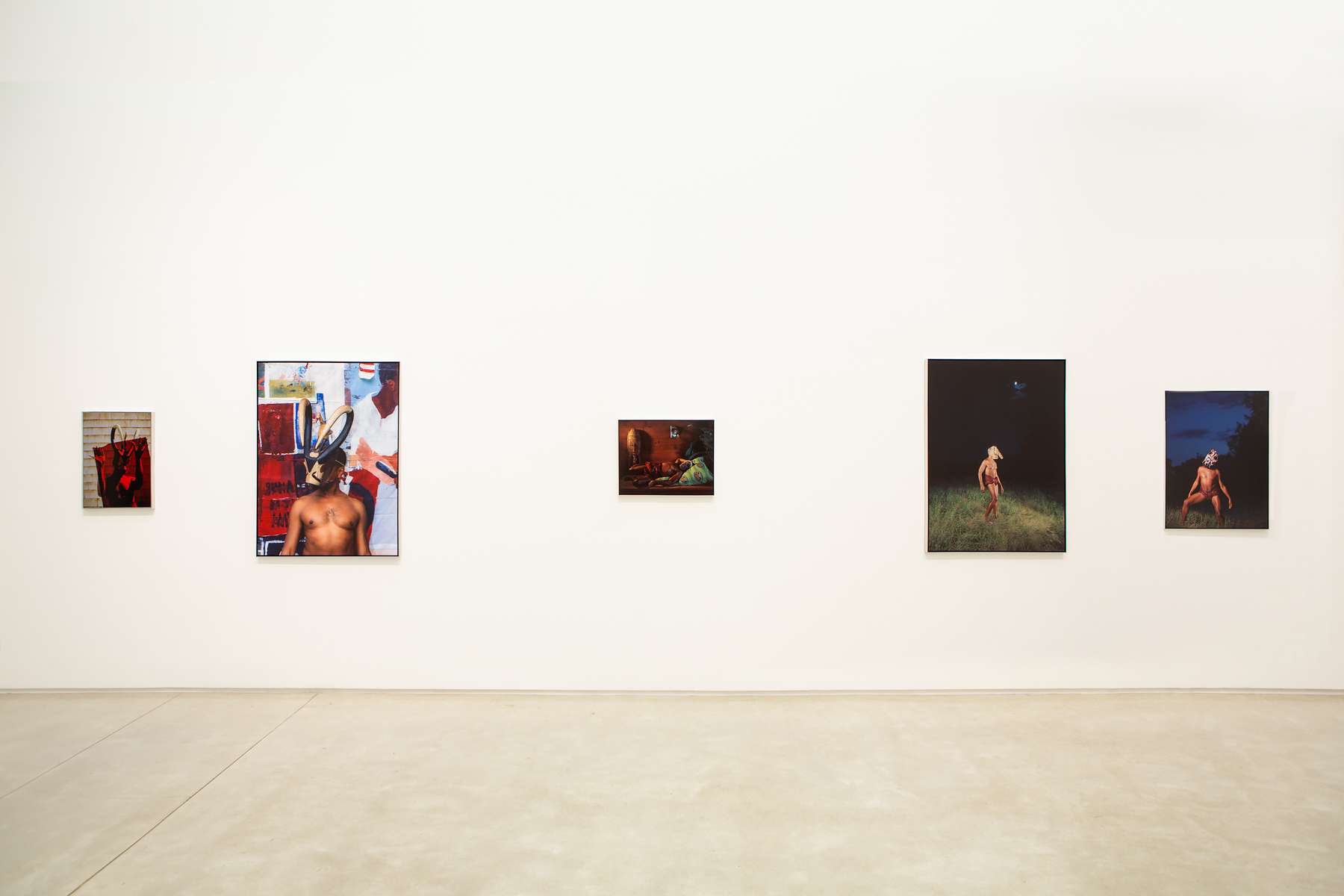 This use of masks echoes expressive gestures found in Harris’s early iconic works. Yet, in these new cinematic images, the studio backgrounds have been replaced by lush, bucolic natural environments. All of the shoots took place in idyllic landscapes: Germantown in New York’s Hudson Valley, Provincetown, Massachusetts, and on Fire Island, New York. The mid-to-large-scale photographs (in editions of three), are dye-sublimation transfers printed on aluminum, giving the images a saturated luster.

Harris has employed masquerade variously throughout his thirty-year career. In his earliest bodies of work, such as Americas (1987-88), Harris appears in whiteface, posing defiantly or writhing ecstatically. In Constructs (1989), he presents himself as a solitary, statuesque figure striking poses across four panels, stripped bare, save for a wig and swath of crinoline. In both cases, Harris stands in confident possession of all aspects of his bodily form and identity. Constructs, which featured in Thelma Golden’s 1994 exhibition, Black Male: Representations of Masculinity in Contemporary American Art, at the Whitney Museum of American Art, exemplifies Harris’s intentional use of artifice to question his own image in relation to the social and cultural “constructs” being projected upon him.

In a later body of work, Billie, Boxers, Better Days (2002), the artist uses full masquerade in a series of performative self-portraits, ranging from portrayals of jazz singer Billie Holiday, to a bloodied male boxer. In the Better Days images, layered mise-en-scènes also incorporate African masks in reference to modernism’s cultural appropriation of primitivism and ambivalent negrophilia.

Alluding to an Afrofuturistic aesthetic, Harris’s new work luxuriates in his cultural roots, embodying a series of enigmatic masked figures engaged in a bold, uninhibited dance of gestures, taking us beyond stereotypical affectations of sci-fi superheroes or sentimental ethnographic conceits.

Alluding to an Afrofuturistic aesthetic, Harris’s new work luxuriates in his cultural roots, embodying a series of enigmatic masked figures engaged in a bold, uninhibited dance of gestures, taking us beyond stereotypical affectations of sci-fi superheroes or sentimental ethnographic conceits. Found throughout the world, masks are seen as the ritual embodiment of spirits and ancestral beings connected to the realm of the living. They also represent defiant symbols of endangered cultural legacies and act as protective avatars of forces that sustain ancient ethical traditions against an uncertain future. Harris’s use of masks embraces their mystery with abandon, to evoke elemental powers that invite deeper exploration into our hybrid intersectionality of history, race, gender, sexuality, mythology and memory.

Harris speaks from where he stands through this new work, in exploration of his place in the world as an artist comfortable in many roles—as performer, educator, son, brother and friend—a Black queer man of the diaspora in America. 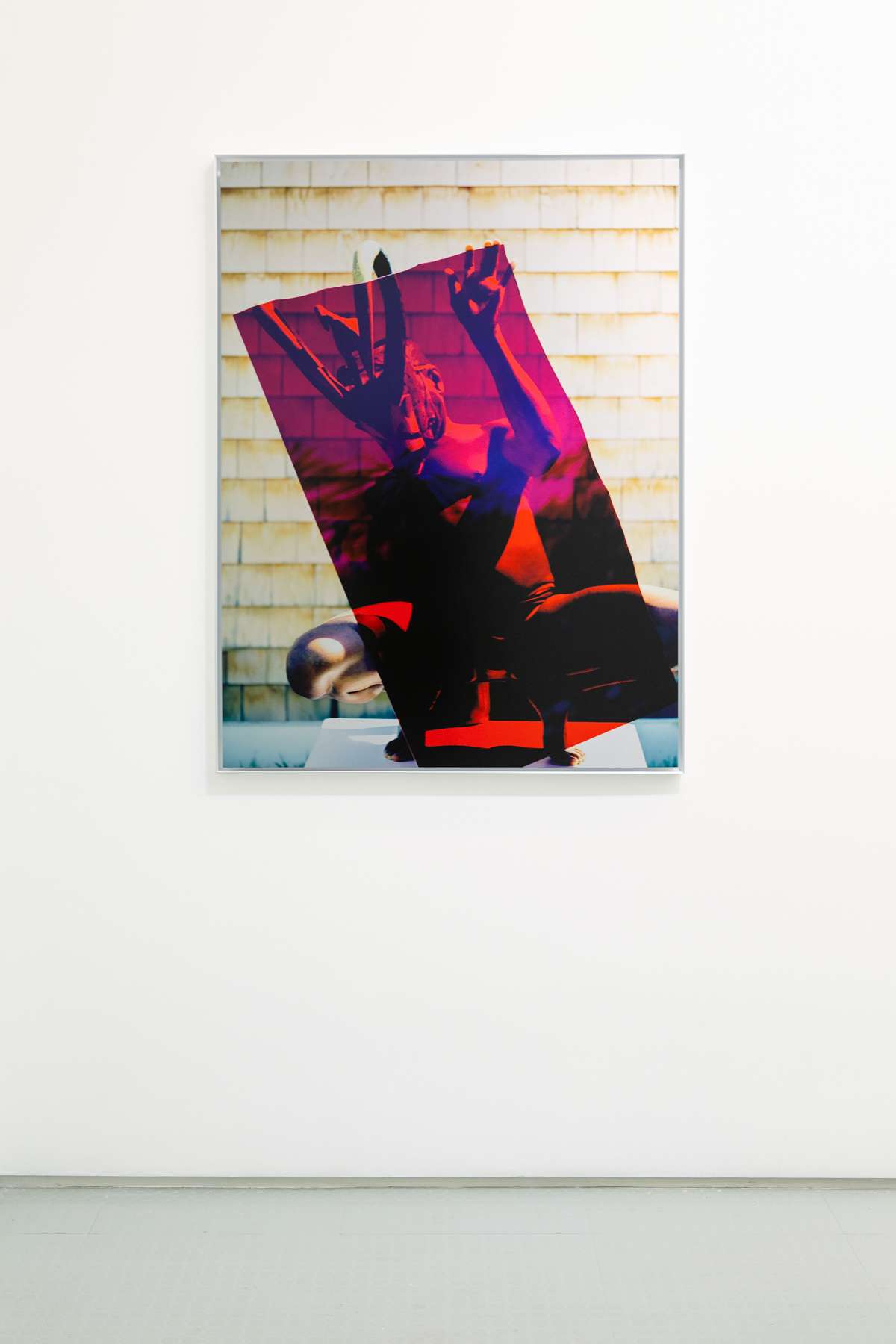 Lyle Ashton Harris (born in the Bronx, New York, 1965 and raised in Dar es Salaam, Tanzania, and New York) received his BA from Wesleyan University, his MFA from the California Institute of the Arts, and attended the Whitney Museum of American Art Independent Studies Program. His work has been exhibited worldwide, including most recently at LUMA Arles, France; the Cinéma Du Réel, 40th Edition, presented at the Centre Pompidou, Paris, France; the 2017 Whitney Biennial, New York; the 2016 São Paulo Biennial, Brazil; The Studio Museum in Harlem, New York; the Solomon R. Guggenheim Museum, New York; the 52nd Venice Biennial, Venice, Italy, among others. His work is represented in permanent collections including The Getty Museum, Los Angeles County Museum of Art, and Museum of Contemporary Art, in Los Angeles; Guggenheim Museum, Museum of Modern Art, The Studio Museum in Harlem, and Whitney Museum of American Art, in New York City; Museum of Fine Arts, Boston; Pérez Art Museum Miami; and the Walker Art Center, Minneapolis. Harris received a 2016 fellowship from the John Simon Guggenheim Memorial Foundation, among other awards and honors. He currently lives and works in New York City and is an Associate Professor of Art at New York University.