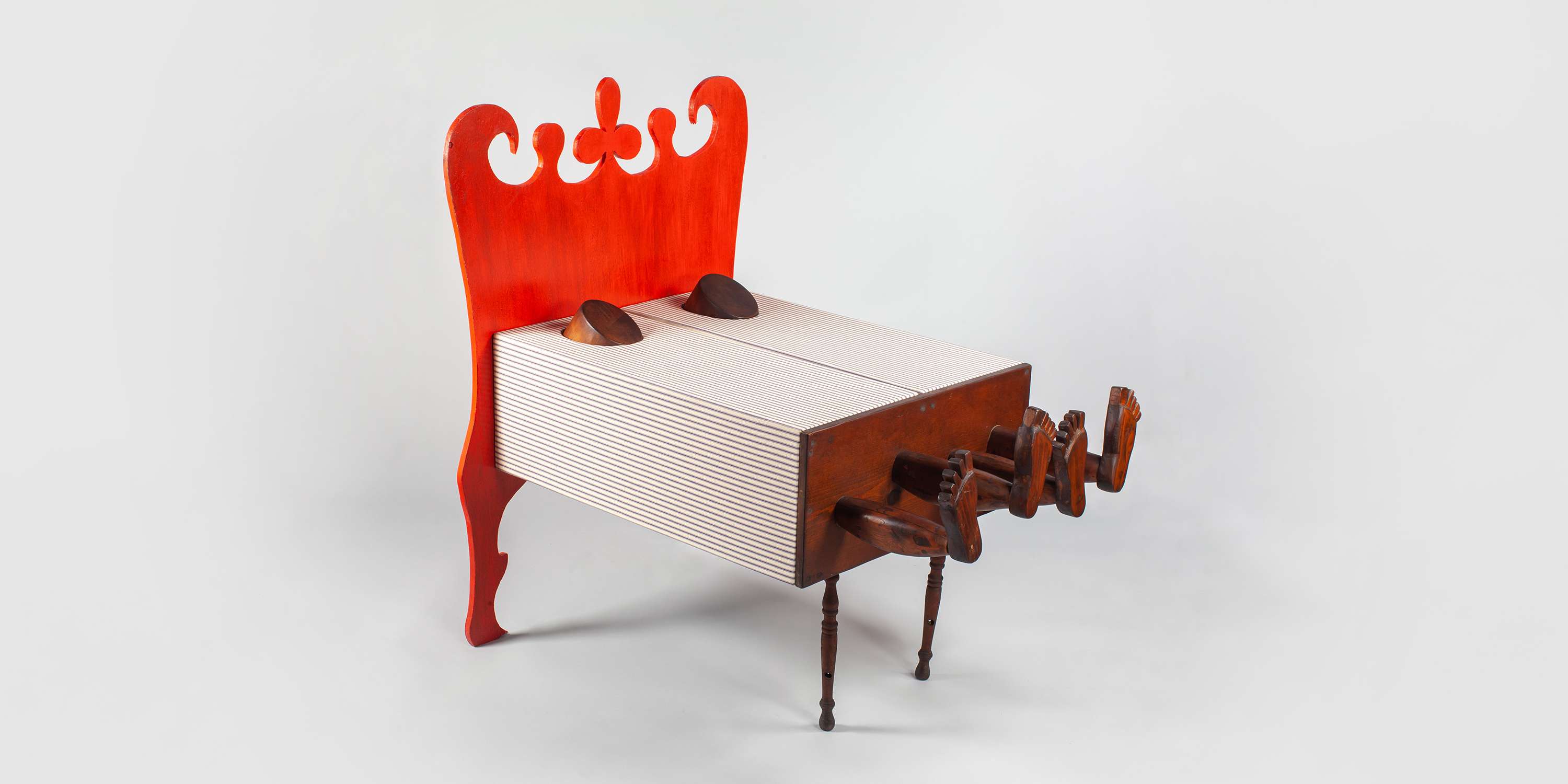 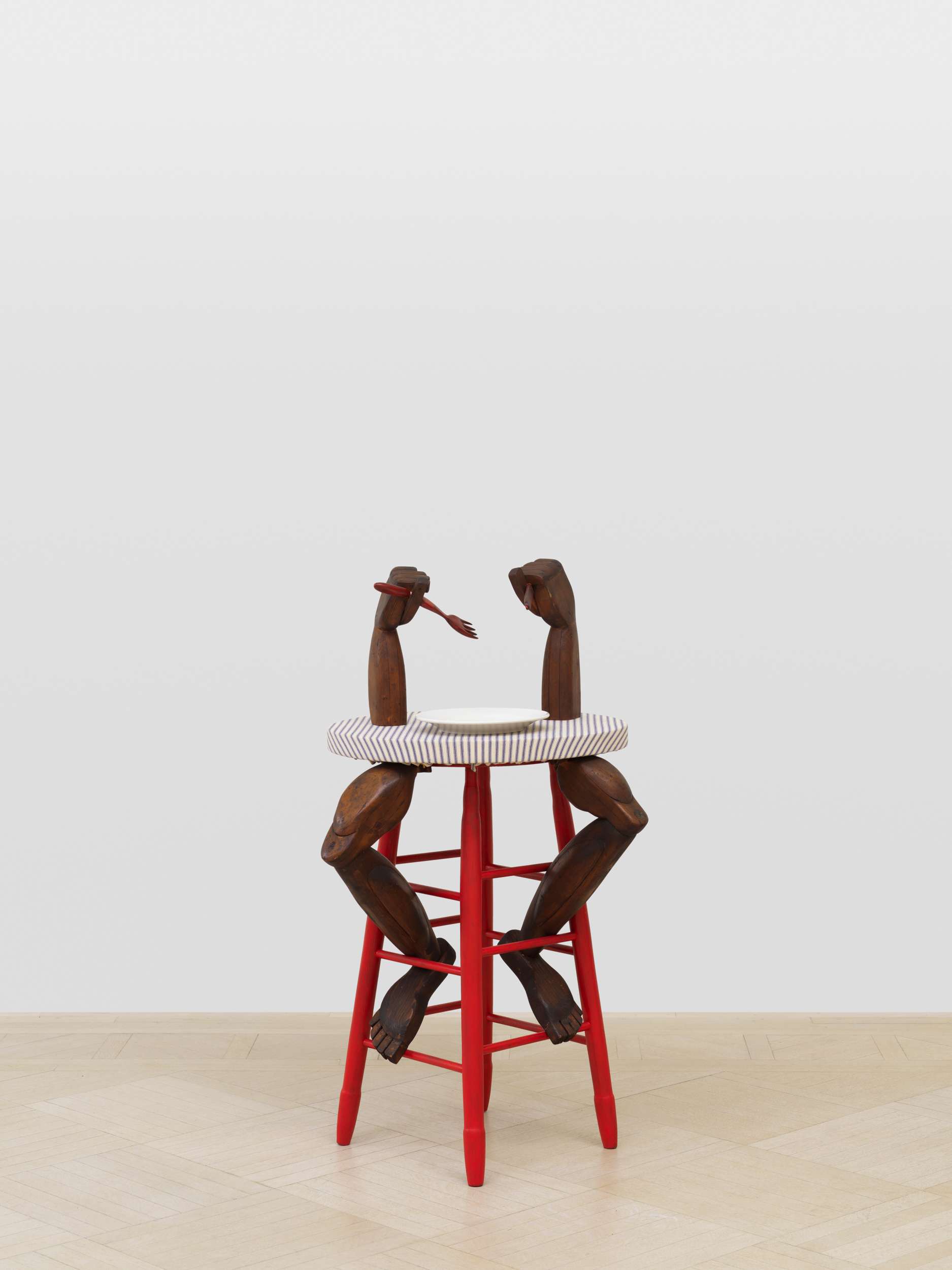 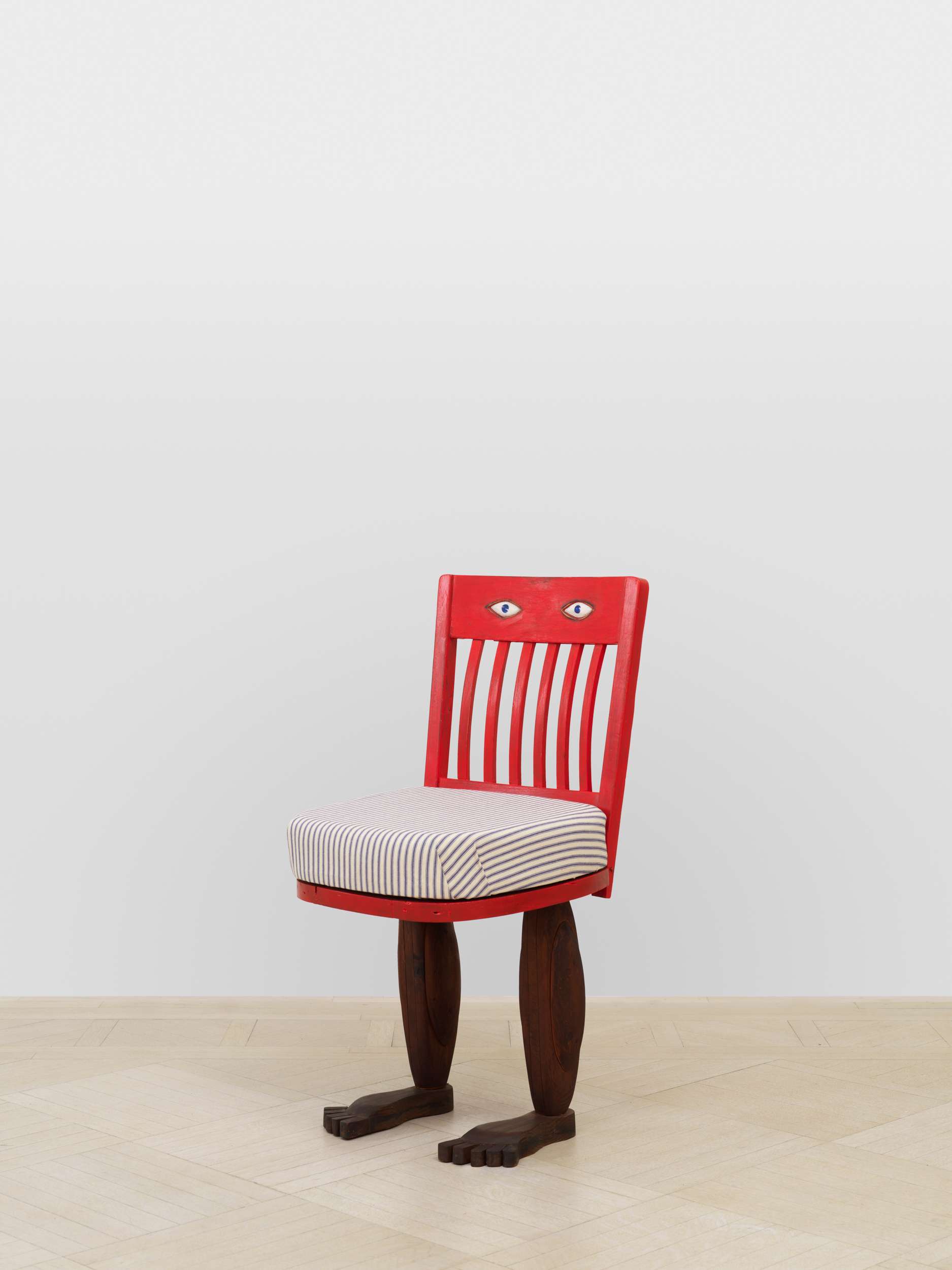 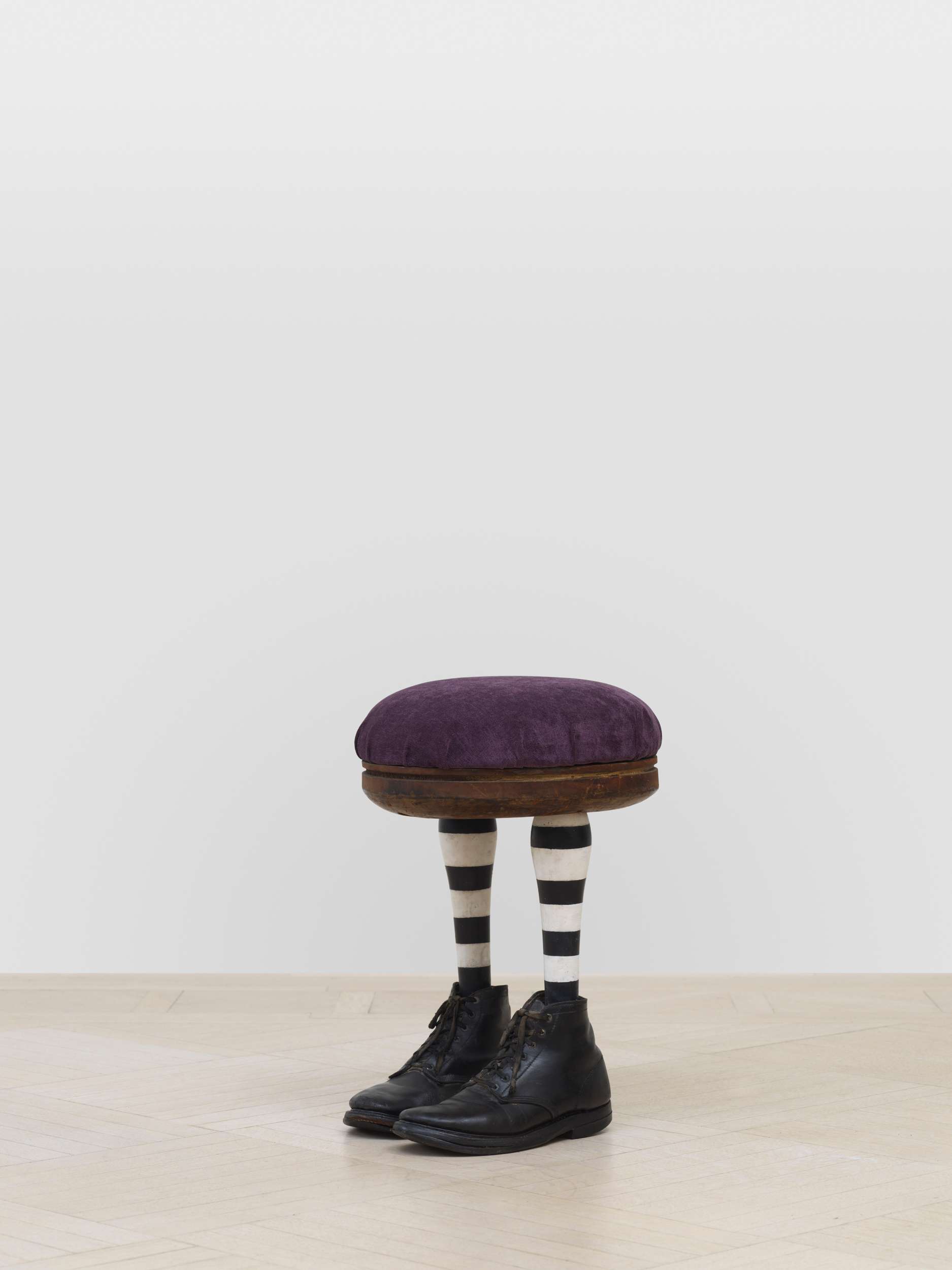 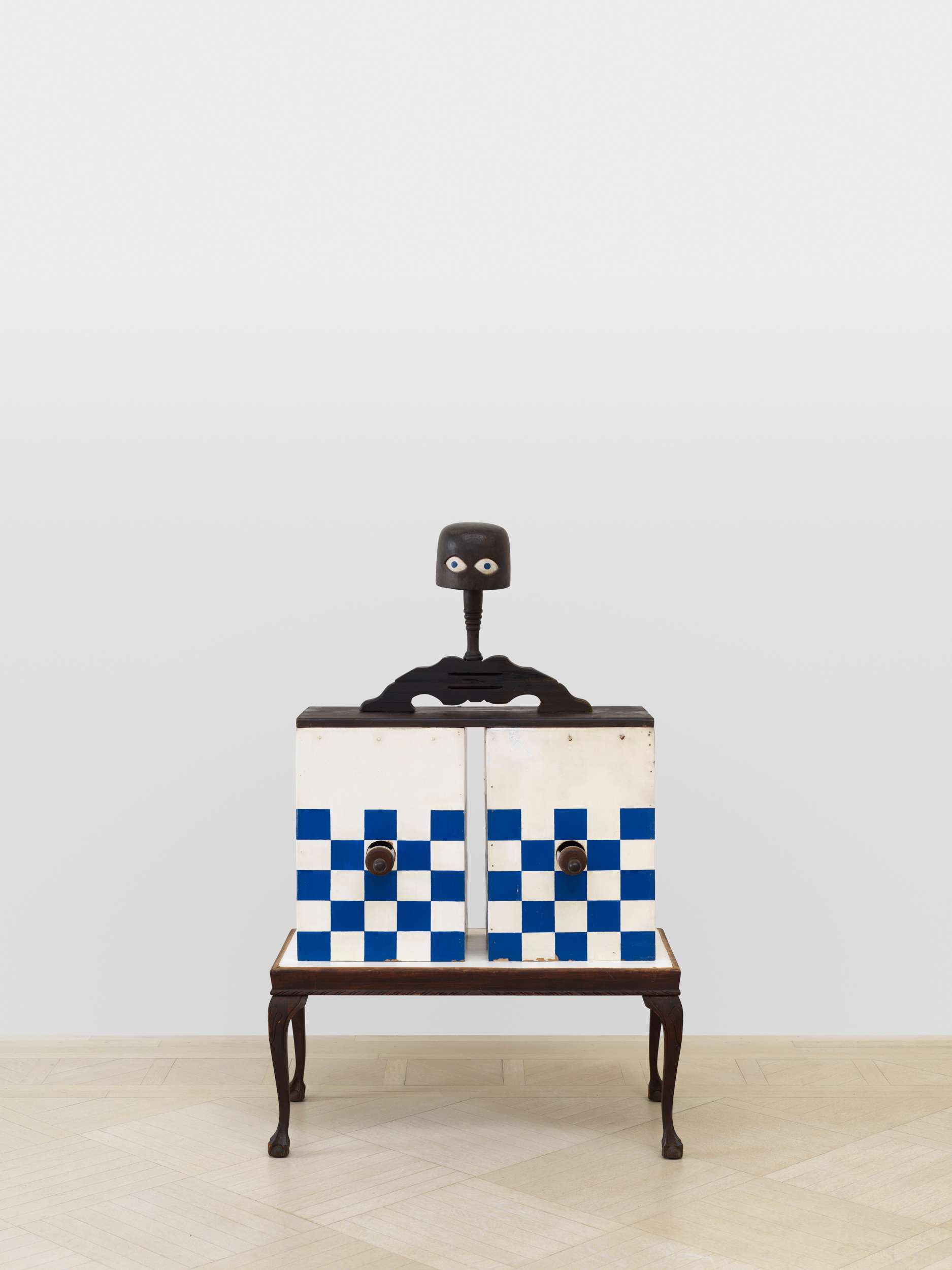 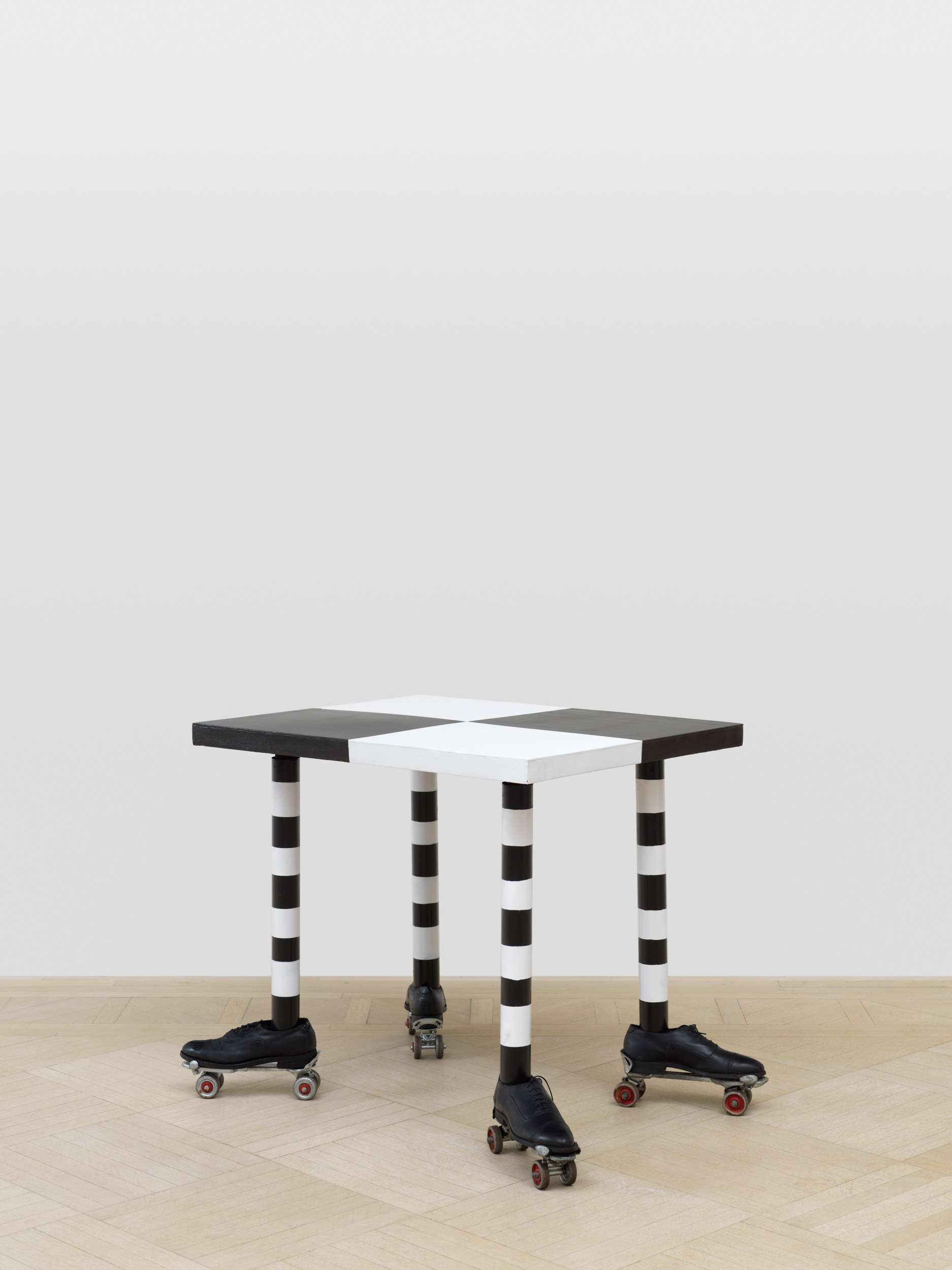 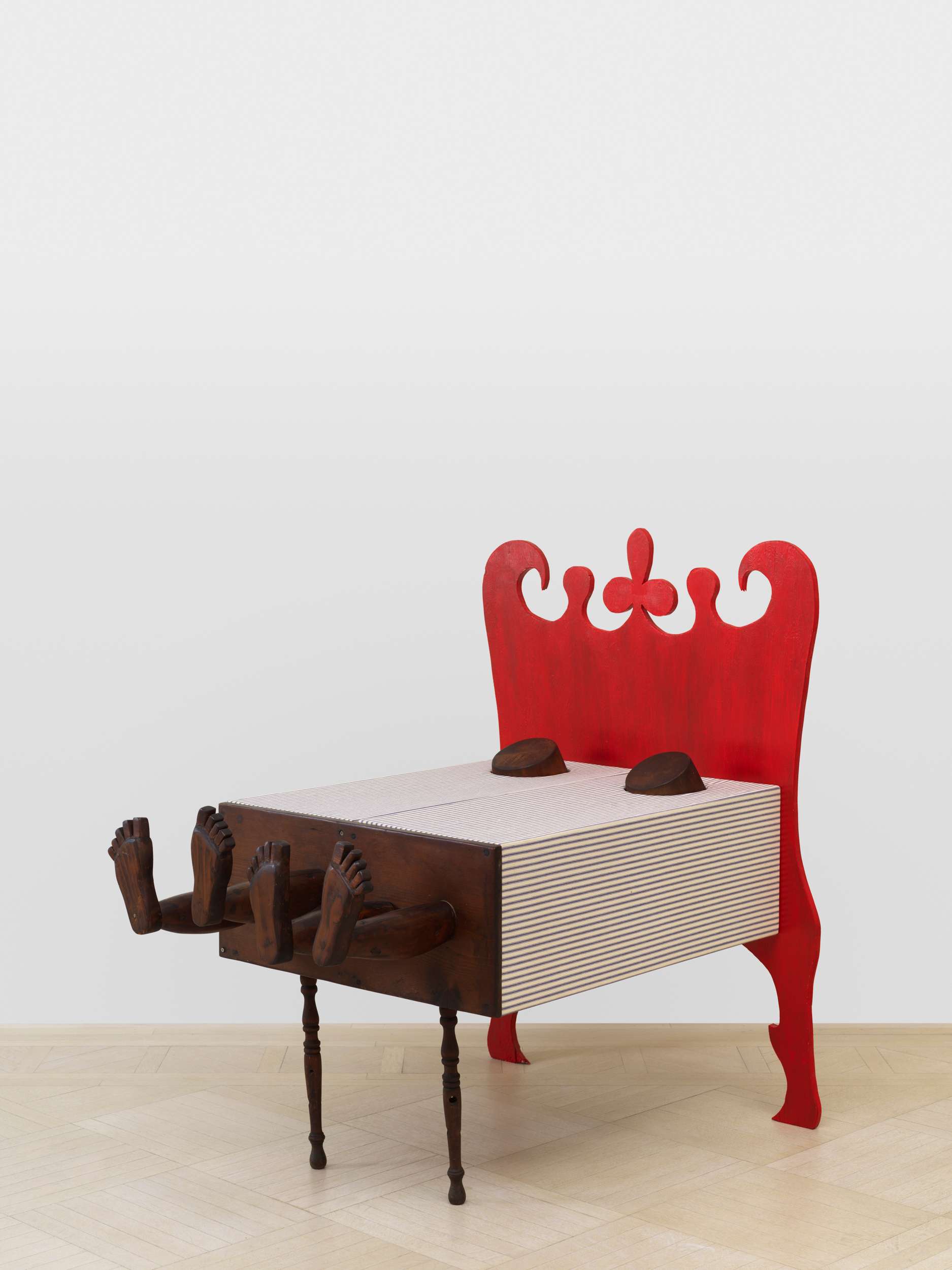 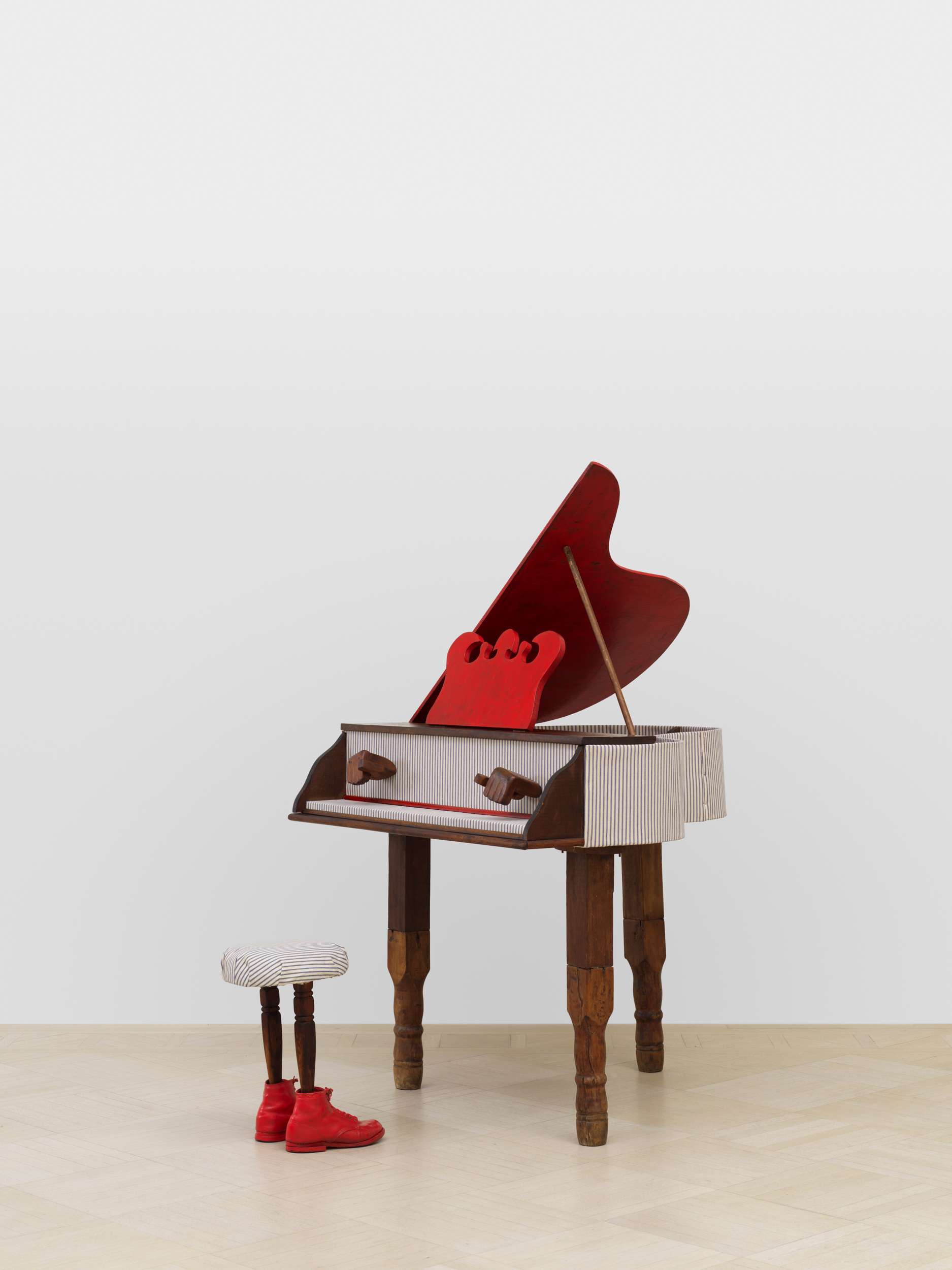 Salon 94 Design presents Fantasy Furniture, 1967, an exhibition of work by the late writer, activist, and Fluxus artist Kate Millett (b. 1934 – 2017). Widely known for her seminal feminist texts including Sexual Politics, 1970, Millett was also an accomplished artist and member of the downtown New York art scene – working alongside Fluxus artists like Yoko Ono and Pop artists such as Marisol Escobar. This exhibition recreates Millett’s first New York solo exhibition at The Judson Gallery in 1967, originally titled Furniture Suite and later described by Millett as Fantasy Furniture, with works on paper from 1976–1980.

Assembled together for the first time in 50 years, Millett’s Fantasy Furniture works are hand-carved of wood, upholstered in mattress ticking and combined with found objects into anthropomorphic sculptures resembling domestic furniture; Chair, 1965 stands on two feet; Blue Eyed Marble Box, 1965, a cabinet of curiosities, peers out from a head with two blue eyes; Bed, 1965 with two sets of legs and heads protruding, suggesting a scene of two resting partners.

As Jenni Crain’s thesis Kate Millett: Crossing Boundaries, 2021 suggests, Millett’s Fantasy Furniture works were created during a domestic period of sorts in Millett’s life – upon her return to New York when married to Japanese sculptor Fumio Yoshimura – and grew out of this relationship. They speak to “‘coupling as a phenomenon, all told through the metaphor of the domestic space couples share, more specifically, its furniture.’ In Sexual Politics, Millett denounces the established norm of heterosexual partnering in relationships and the mythologies of heteronormative familial structure as a socially contrived system that maintains masculine authority within and beyond the confines of the home, while allowing women – the female partner – little freedom, autonomy, or agency, if any, at all.”[1]

Fantasy Furniture, henceforth sets the stage for prolific life of feminist activism and critic and also establishes Millett as part of the Fluxus Movement with the inclusion of Uncle Louis Stool with Boots, 1967 and works from the Metaphysical Food, Food for Thought series in the Fluxus Codex and The Gilbert and Lila Silverman Fluxus Collection.

Please go to salon94.com/visit to schedule your appointment.

For inquiries on the work of Kate Millett, please contact Zoe Fisher or Trang Tran.

To live a double life, a triple one, an infinite life comprised of endless limbs, bodies, and minds is the condition of women, queer people, people of color, those who have been called crazy, excessive, those who have been brutalized and locked away. And to live intersectionally is to live with swirling and compounding selves and fantasies, at times beautifully abundant and at others the cause of deadly trips and falls, somewhere between, among, and within criticality and pleasure. Kate Millett made her competing identities no secret: a queer-feminist, a scholar-artist, an intellectual sojourning in the loony bin, a graduate student who had already garnered attention for her work outside academia, a communally minded activist in a world that only rewards rugged individualism. Despite her and our penchant for living as anomalies, as anthropomorphic figures encompassing mute sculpture and what might be derided as shrill agitprop, there is always need for rest. There might be a need for a dinner for one. It is wonderful to not feel freakish, trapped, drilled into a pedestal, played like a piano, estranged like seated lovers who will never face each other, if only for a moment. It is wonderful to not feel overwhelmed by regret that rips into you like history does to female/femme bodies, trying to exhume their flesh and place it into an insincere narrative that wishes it would die. One must sit occasionally or at least find a platform on which to hang a circus of disappointments, bric-a-bracs of rage. One must accept, with some pathos, the cuteness of Millett’s characters like Chair (1965) and ask what stories they might want to tell us as they saunter along. Millett never did hold still, though surely she wished she and we could occasionally hold still, because feminist history, always restless, does not: “And the history of the emancipation of women is—like other stories that describe the long, difficult winding down of oppressive systems—circular; a little forward, almost as much backward, then standstill, reaction, repression, then another surge.”[1] These sculptures are a part of that surge, just as they are situated at the moment of calm before a new wave. Maybe they are a conduit between those states.

Millett was an accomplished artist and member of the downtown scene in New York before she became a feminist celebrity with the publication of Sexual Politics in 1969. She found herself intersecting with Fluxus, an avant-garde group of artists, poets, and composers who used performance, humor, assemblage, video, and other media to deconstruct power structures and normative ways of looking at art. Alongside other women artists like Yoko Ono, her longtime friend and colleague, Millett was a figurehead of a feminist Fluxus. Millett also found herself in dialogue with Pop artists like Marisol Escobar, whom Millett admired and invited over to her studio at 295 Bowery.[2] Drawing upon the expansive, multi-disciplinary, and feminist context of the New York avant-garde, she first showed her Fantasy Furniture in 1967 at the iconic alternative art space The Judson Gallery, housed in the basement of a progressive church. Millett became a part of a wave of artists working between art and furniture, among them Nicola L., a feminist proponent of “functional art” in the French New Realist circles, and H.C. Westermann, who used his training as a carpenter to examine the horrors of war.

It might not be useful to try to divine a relationship between Millett’s visual art and her writing, since one cannot determine the other, just as one amorous body cannot determine another amorous or indifferent body. More important than a question of medium is the re-evaluation of Millett’s visual and literary work as affirmative that all of us, those who appear in history books and those who do not, are so much more than the discourse about us could ever contain, more weight than a stool or box or flesh could hold. It was exactly this plenitude that Millett’s professors found irksome, dilettantish: “As a doctoral candidate in literature at Columbia I led a double life; during my preliminary examination the fact that two of my sculptures had recently appeared in Life magazine was thrown up to me as proof I was not a serious scholar.”[3] In the Life article, there is a photograph of one of Millett’s sculptures, a table on skates, being rolled down the streets of New York, a punchline and a gurney. In the same Life advertorial lives Stool (1967), which provides a nodding, wise support to an archetypally cute child at the piano, smirking at the seriousness of art, theory, and literature.

To the detriment of many students, the Barnard College English Department did not renew Millett’s teaching contract. Perhaps as an understandable internalization of the biases of academia, Millett thought of herself as a dilettante as well: “I was an angry young woman with a message, a graduate student who wanted to be a scholar, a sculptor who wanted to learn to write.”[4] Yet we might tell her, were we able to reach her, that she was all these things, and we know that to be true because we too are simultaneous, continuous despite the demands of academia, the police state, the patriarchy, the biomedical industrial complex, and other arms of the hetero-patriarchy. In the face of these multiple hegemonies, Millett had a good time.

And fun Millett’s sculptures remain, unconcerned perhaps with the weight of discourse, or simultaneously deeply concerned with it, since many of them are meant to make bearing weight easier, or at least more enjoyable, with more possibilities for motion and new directions, indeed multiple directions at once or no direction at all, a feast or a dinner for one. However, as this exhibition reminds us, pleasure is not an absence of criticality. It is a different kind of criticality. Reviewers suggested there was an admirable complicity in the Fantasy Furniture, that Millett was “not being satirical, ironical, or making fun of the establishment, as some artists are accused of doing. She’s simply having a thoroughly good time making furniture.”[5] A thoroughly good time is certainly not something you ought to be having as a scholar, or as a young feminist theorist.

Yet there is so much in between irony and blithe enjoyment, as if that binary could ever hold. Between those poles lies feminism and queerness—political ways of living and ways of living pleasurably. It is true that, with her discovery of the tragedy of Sylvia Likens, a young girl who was tortured and murdered in a boarding house in 1965, Millett’s work would become more serious in tone and turn from whimsical movement into cages and stasis, but that does not mean that the Fantasy Furniture series is an ersatz and apolitical intermediary to her more serious work, or a mere diversion from the heft of Sexual Politics. For Millett, sculpture was something more than words, a cabinet of inarticulable curiosities: “Words, insubstantial nominators facing the thing: height, mass, weight, solid and in space, so clearly defined you could fall over it.”[6] And we must allow this clarity and not force Millett to be inscrutable, in on some learned joke we could not possibly understand. We are all just moving along, until we can move along no more.