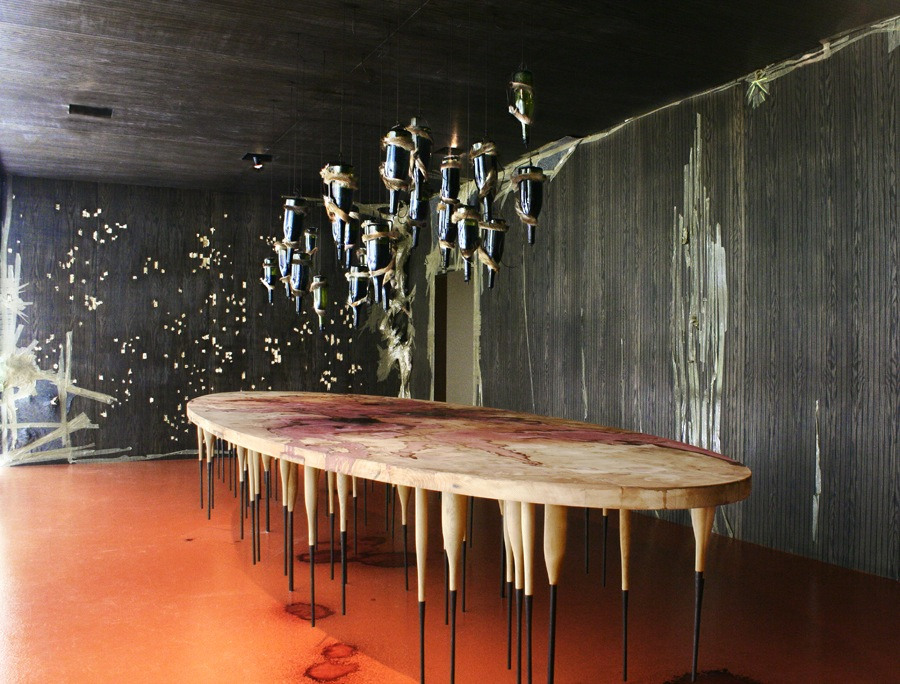 Salon 94 is pleased to present an exhibition by artist Wangechi Mutu in collaboration with British architect David Adjaye. Opening on Sunday, May 21, 2006, “Exhuming Gluttony: A Lover’s Requiem,” is an installation that re-imagines the idea of the banquet.

Wangechi Mutu has taken the notion of the salon and the white cube gallery and hacked into it a beastly feast. Creating a succulent room filled with the tropes and smells of entitlement and over-consumption, Mutu uses her weeping wine bottles and bullet-ridden walls to frame the uncomfortable romance between wealth and waste, affluence and mass poverty.

Within the space, Mutu fashions a romantic feast of exaggerated forms and icons, where sacrifice and opulence are on grotesque display. In the center of the room, for example, is an enormous banquet table, made from a single wood slab supported by a forest of wooden legs cut at various lengths. In front of this crippled table is a trophy sculpture made up of various animal pelts. A diaphanous curtain haunted by a tumorous image oversees the space, where food, wine, and conversation would be flowing.

This installation invokes the same demons and worlds that Mutu's latest collages on Mylar conjure. Her languorous warriors posed in contentment and exhaustion will have a concurrent exhibition downtown at Sikkema Jenkins and Co.

Born in Nairobi, Kenya, Wangechi Mutu lives and works in New York. She is one of thirteen artists in the SITE Santa Fe Biennial curated by Klaus Ottoman and has shown at the Whitney Museum, the Aldrich Museum, P.S. 1 in New York, and SFMOMA in San Francisco. She is represented by Sikkema Jenkins and Co. in New York and Susanne Vielmetter in Los Angeles

David Adjaye, born in Tanzania, is recognized as one of the leading architects of his generation in the UK, He designed the Nobel Peace Center in Oslo, Norway and recently exhibited “Making Public Buildings” at the Whitechapel Art Gallery in London