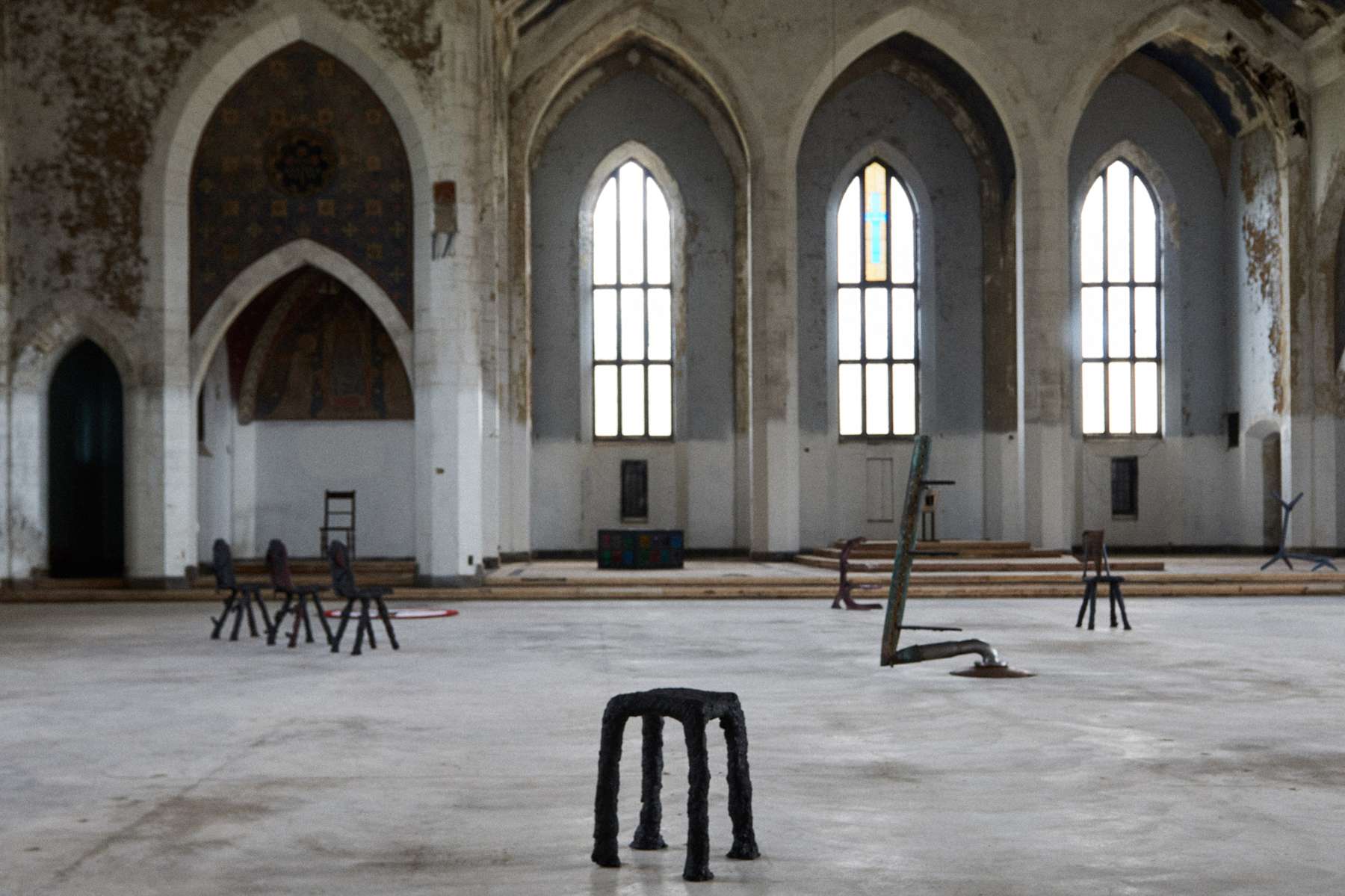 Working from Portugal while unearthing his Nigerian roots, Kanu explores objecthood and resilience in a new series for the woods cathedral in Detroit, Michigan.

The show’s title borrows from the graphic ensign of The Royal Niger Company, a short-lived trading corporation (1879-1900) that was instrumental in the formation of colonial Nigeria. Translated from the latin, "Ars Jus Pax” means “art, justice, peace”—though according to a 19th-century trade document, the company’s founder understood the motto to mean “unity, equity, and ingenuity.” It’s a catchphrase that continues to resonate today, despite its unsettling and paradoxical origins. By revisiting this history, Kanu questions the ethics of our trade practices and, by extension, the possibility of an equitable exchange of the arts.

Kanu hand-sculpts concrete onto welded steel under-structures. Pigments in the concrete color many of the works in a deep rich black, while Kanu’s Hot Seat is devilishly flamed in red, and Student Loan Debt Relief 1 is dusted, fittingly, in a dollar-bill green. His sculptures are functional, additive, and figurative; their skins reminiscent of Giacometti’s forms and molten volcanic ash. At times, he leaves the found frames bare to reveal the raw forms of these materials.

Kanu’s sculptures riff on the idea of the church as venue, evoking pentecostal sermons, which are iterated in the parentheses of his titles: The Reaper, Hot Seat, Whole in Won (Baptismal Font). Crosses and thorns ornament the work.

In a statement, Kanu describes his own “trade route”:

“In February 2018, due to the increasing costs of apartment and studio space and a whole host of other reasons, I relocated from New York to Santarém, Portugal, a small city one hour north of Lisbon. I found an old warehouse in the village countryside and converted it into a live-work space. A certain lucid energy came from living and working in this remote area. Simultaneously, Salon 94 Design invited me to put together a show at Visitation Catholic Church in Detroit.

Designed by the British Architect Raymond Carey, the church was founded in 1919, as part of the northward expansion of Detroit in the early 20th century. The church’s membership began declining in the 1960s, coinciding with the rise of the civil rights movement. The riots of 1968 resulted in increased “white flight” from the city, and the church closed its doors in 1983, when it was sold to a new congregation: Woods Cathedral Church of God in Christ, part of a large black pentecostal movement that had originated in the south and moved north in the 1920s and ’30s. When word spread that visitation would soon be closing, Pastor Amos L. Woods began fundraising, outlining an ambitious plan to use the church as a base for job training programs, substance abuse treatment, and assisting the poor. After two decades as a congregation, Woods Cathedral began struggling as well, and closed sometime between 2006 and 2008. In 2014, Salon 94 Design’s Paul Johnson purchased the building at auction for $6,700 and got to work replacing the damaged roof, removing asbestos, and renovating the church’s structure.

On December 18th, 2018, I boarded a flight to Nigeria for the first time. I was born in Houston, Texas, to Nigerian immigrant parents who never managed to find the time or funds to take our family back home. So i decided to go and see it for myself—to experience the culture I was raised under firsthand. In Nigeria, I observed many links to the way I was currently working, including the complete and total utilization of available objects and resources. It was surprising to me, because I’d spent a lot of my childhood trying to suppress my Nigerian roots. Now I find myself in constant search of connection to this heritage.

For Ars Jus Pax, I drew on the story of the 1895 Akassa Raid, when King Koko, leader of the Nembe Kingdom of the Niger Delta, led over 1000 men in a pre-dawn raid on The Royal Niger Company’s headquarters. I used this history to loosely frame the ethos of this new body of work, embedded with the idea of withstanding authoritarian regimes. Along with fragments of Nigerian colonialism and rebellion, the exhibition focuses on the transcendent nature of conceptual art, objecthood, and purpose. By taking found objects and giving them a new function, I’m challenging the notion of art being purposely useless. Assigning each work with a reason for existing was fundamental—just as with human life. I created many of the works with metal “skeletons,” which I later fleshed out using pigmented concrete.”

Dozie Kanu (b. 1993, Houston, tx) is an American artist and designer living and working in Lisbon, Portugal. Kanu studied production design for film at the school of visual arts in New York. In 2016, he began working with Salon 94 Design.

In 2018, Dozie Kanu was invited to put a progressive spin on Rimowa’s iconic designs for Salone del Mobile in Milan. Later that year, he was awarded the Miami Design District’s 2018 Holiday Commission, as well as The Hublot Design Prize. Kanu’s group exhibitions include Midtown, which took place at the historic Lever House in Manhattan, and Blow Up, curated by Felix Burrichter at Friedman Benda in Chelsea, New York. In 2018, he exhibited his first solo show, Humane Alternatives, at London’s Soft Opening. Ars Jus Pax will be Kanu’s first solo exhibition with Salon 94 Design.