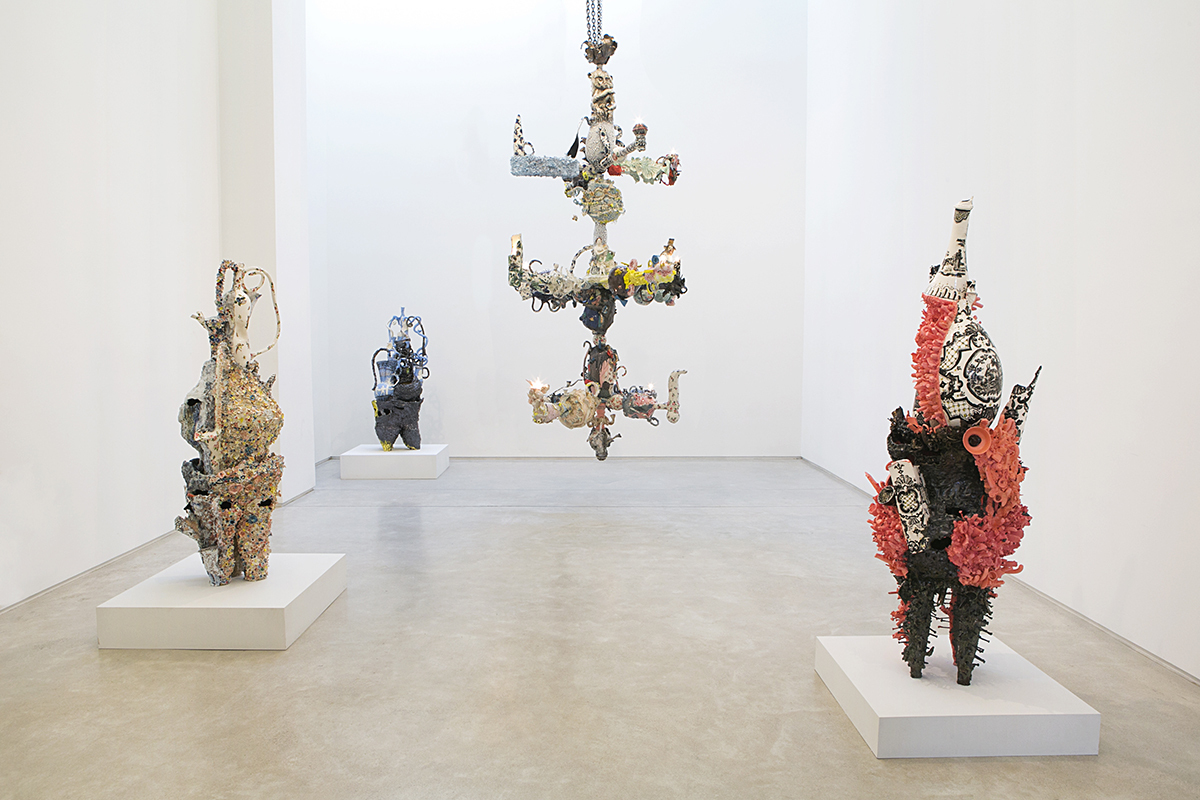 The forms of the functional domestic object—the handles, holes and spouts of vases; the legs and feet of tables and chairs; and the protruding arms of chandeliers—becomes subject and fodder for Francesca DiMattio's artistic inventions.

Salon 94 is pleased to present an exhibition of large-scale ceramic sculpture by New York based artist, Francesca DiMattio. Known for her canvases that bring together a cacophony of objects, architecture and painting traditions, DiMattio applies a similarly layered and non-hierarchical approach to sculpture. Where her paintings pair multiple languages culled from the history of Western painting, her sculptures draw from the equally rich tradition of ceramics, combining contrasting references and styles within each fluid construction.

DiMattio looks to the mechanics and aesthetics of craft for inspiration in her art-making practice. A sewing needle’s perpetual up-and-down motion or the juxtaposition of patchwork, appliqué and embroidery in quilt-making has influenced her sense of composition and structure as much as traditional, art-historical conventions. In both her painting and sculpture, she discovers ways to weave together the history and artistry of craft, transposing it from a practice of quiet control into one that seems unpredictable, explosive and shifting. Similarly, she mixes high and low, East and West, the historical and the contemporary. In her new works made from porcelain, she mines the rich history of the medium, alluding to an almost encyclopedic lineage: English Rococo vases, Turkish tiles and Islamic Fritware, Viennese Du Paquier and French Sevres porcelain, Wedgwood figurines, and Meissen vases are all sources. She pairs these historical antecedents with references to contemporary kitsch, like Chintz-ware porcelain, mass-produced glass vases, floral-patterned tissue boxes, and Laura Ashley bed sheets.

In both her painting and sculpture, she discovers ways to weave together the history and artistry of craft, transposing it from a practice of quiet control into one that seems unpredictable, explosive and shifting.

The forms of the functional domestic object—the handles, holes and spouts of vases; the legs and feet of tables and chairs; and the protruding arms of chandeliers—becomes subject and fodder for her artistic inventions. While domestic objects have historically been associated with the feminine, and relegated to the lowest position in the hierarchy of the arts, DiMattio elevates them into vehicles for expression through her monumental shifts in scale and in her deconstruction and abstraction of recognizable forms. In her largest and most ambitious sculpture to date, Chandelobra (2015), she perverts and distorts the familiar form of the chandelier, transforming it into something ominous and starkly unfamiliar. In Bloemenhouder (2015), DiMattio hand-sculpts hundreds of tiny porcelain flowers and pairs them with robust, flowing lava and crackle glazes. Overwhelming the surface with ornament, the floral accents become viral - almost grotesque – while the lava glaze shifts from the primordial to the elegant, partially obscuring the vessel beneath.

Porcelain became popular in the West in the seventeenth century after the Chinese began exporting familiar, utilitarian objects (candlesticks, mugs, bowls, dishes) coveted by the Europeans. As these objects were previously unknown in China, models were sent to the Far East to be interpreted and elaborated upon. DiMattio rifts on this history, creating objects that have been copied and re-imagined, using reproductions and illustrations as her guide. She then punches, bends and distorts her vessels, moving back and forth between careful control and aggressive destruction. Parts of the clay constructions record DiMattio’s fingerprints, building a rhythm that suggests speed and boldness. These moments are juxtaposed with detailed glazing that is slow and scrupulous, and is culled from reproductions of porcelains that she has amassed. DiMattio delights in these contradictions, grafting the masculine onto the feminine, pairing the beautiful with the grotesque, and seeking the imperfect balance between history and the ever-changing present.

Francesca DiMattio (b. 1981) lives and works in New York. Recent solo exhibitions include “Francesca DiMattio: Housewares,” at the Blaffer Art Museum, Houston in 2014 (catalogue forthcoming) and “Vertical Arrangements,” at the Zabludowicz Collection, London, in 2013. Her work is in the permanent collections of The Miami Art Museum, Miami, FL; The Perez Art Museum, Miami, FL, The Frances Young Teaching Museum and Art Gallery at Skidmore College, Saratoga Springs, NY, The Saatchi Gallery, London and The Zabludowicz Collection, London.