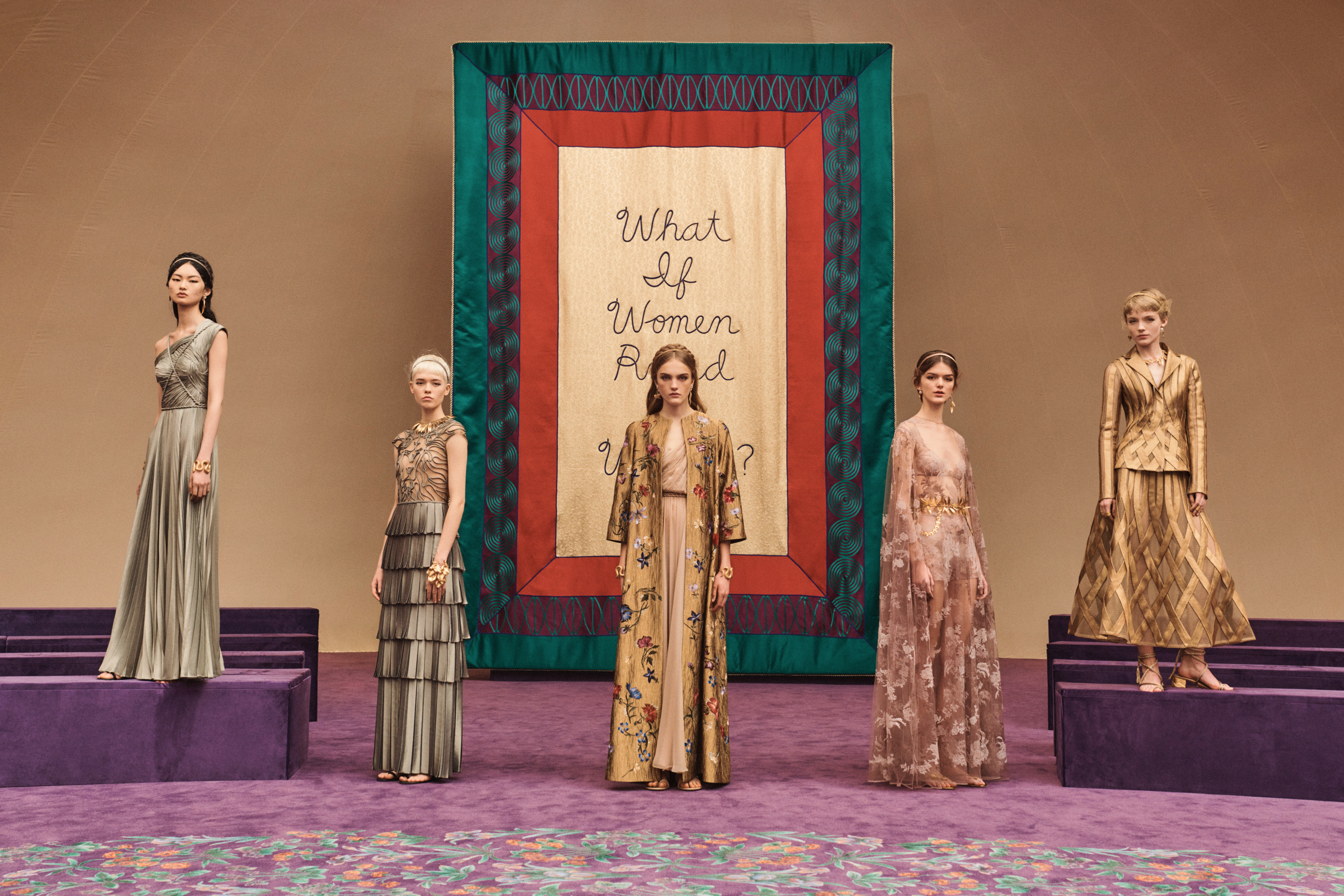 In my initial conversation with Maria Grazia Chiuri, we agreed that we would embark on a collaboration for the next Dior spring-summer 2020 haute couture show, which would be held at the Rodin Garden on January 20, 2020. At that time, I suggested that we explore whether it would be possible for fashion to bestow upon women a sense of divinity, one that might directly challenge their long-standing objectification in both the world of fashion and in the wider world. Since that time, I have been doing research about the history of Dior and discovered that each of Dior’s shows was based on a concept or theme, and that reinforced my idea of developing a show with Maria Grazia around the concept of the female divine.

This would be achieved in multiple ways, primarily through Maria Grazia’s designs, which would be presented in a specially designed environment. First, guests would literally enter a tent created in the shape of the body of the goddess. This huge, white translucent figure would measure 90 meters long by 20 meters high and 15 meters wide. An outdoor walkway would be covered in a transparent material in order to protect attendees from winter weather while allowing them to view the structure as they enter. Second, once inside the tent, the interior space would be covered with pale, translucent gold fabric and illuminated from within by gold lighting, intended to create a cathedral-like space and to endow the clothes with a spiritual aura.

The long, centered runway would be lined with of a mixture of three types of flowers - irises, roses and violets - traditionally associated with the great mille fleurs Renaissance tapestries: This motif was originally based on a custom developed in the Courts of Love wherein women pinned flowers to fabric. Recent scholarship has suggested that this era of the troubadours, which was presided over by women, was actually a reaction to the anti-social behavior of younger nobles who had come back from the Crusades having lost their veneer of civilization. Royal women took on the task of helping them shed their uncivilized behavior (acceptable during times of war) and re-acclimate them to the rules of society.

At the far end of the runway a large banner measuring 12 x 7 meters would hang. This banner would be comprised of purple velvet with gold brocade backing and gold braided edges. Embroidered in gold thread will be the question: What if Women Ruled the World?, aimed at inspiring viewers to imagine the possibility of a different, hopefully more humane world. Continuing along the sides of the runway will hang twenty more, smaller banners, embroidered with other questions formulated around this idea of imaging a world in which women are in charge. The questions would be asked in English and French.

My extensive knowledge of this historic imagery grows out of my years of research for The Dinner Party, when I learned that all early societies worshiped female deities. Re-igniting a greater respect for women across the world seems to be an appropriate goal for contemporary fashion, which after all, is a world in which women play a major role. Historically, clothing made for the male dominated church bestowed divinity upon its wearers; it’s high time for women to enjoy a comparable stature.

Hopefully, the combination of Maria Grazia’s designs, the goddess environment and the series of questions will lead viewers to be enlightened, empowered and inspired to bring a renewed respect for the power of women as they leave the show.

Note: The venue for The Female Divine remained open for 6 days welcoming 10,000 visitors during this short period of time.