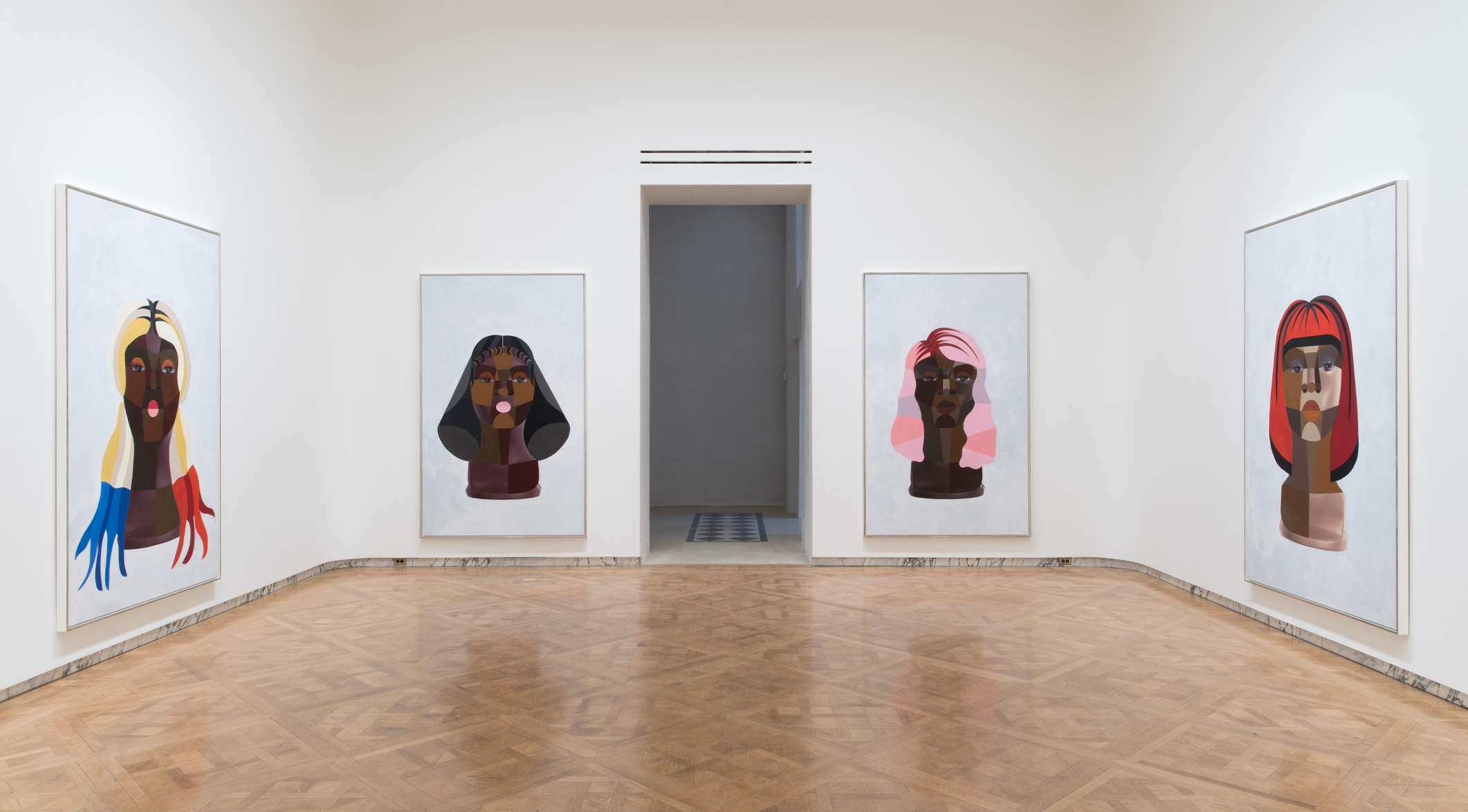 I feel more than ever that it is essential for artists to make work that celebrates Black culture. As a Black man, I am aware of my vulnerability and susceptibility to trauma and oppression on a daily basis...there are images that are less important for us to see than images of joy. — Derrick Adams 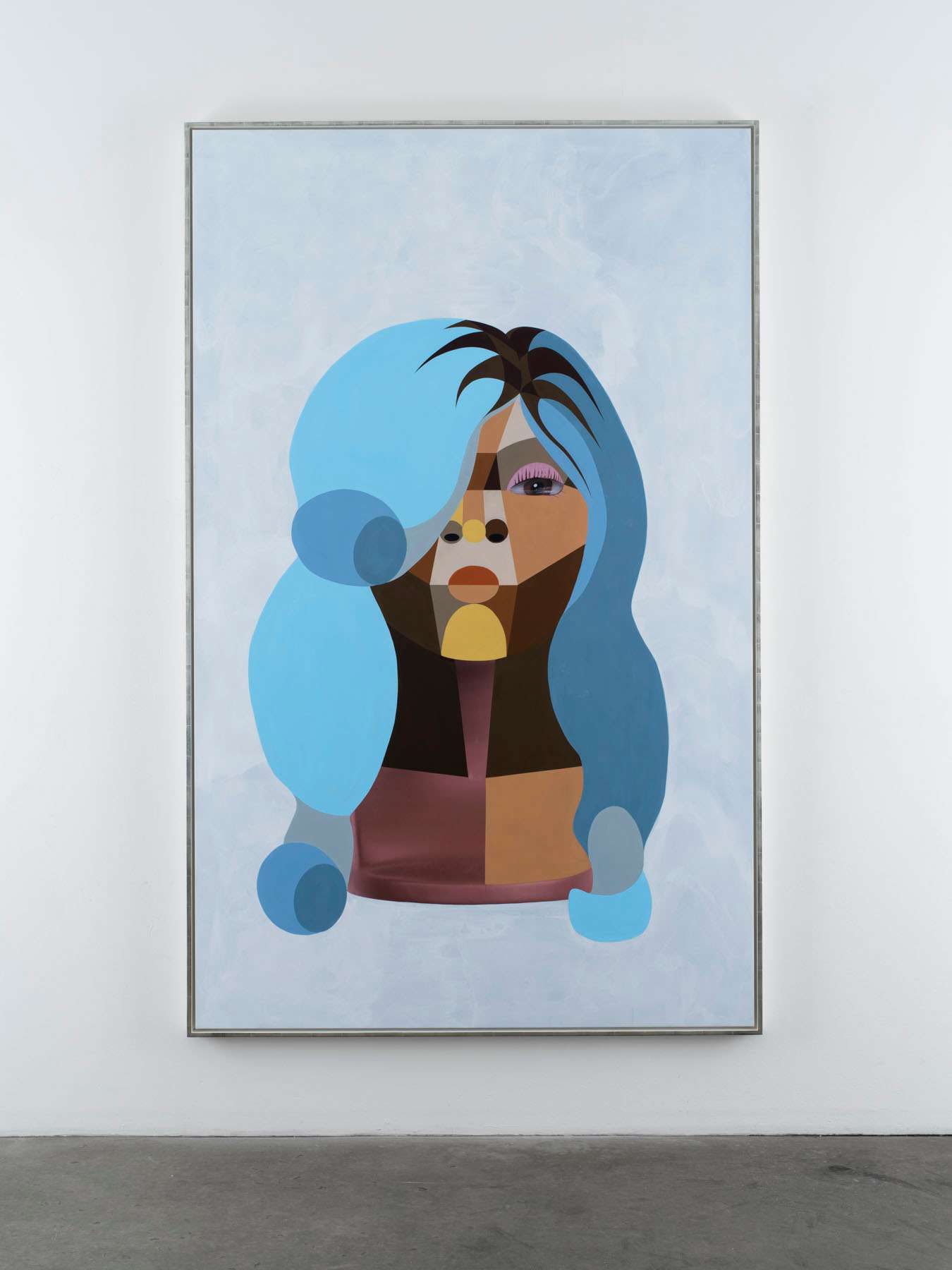 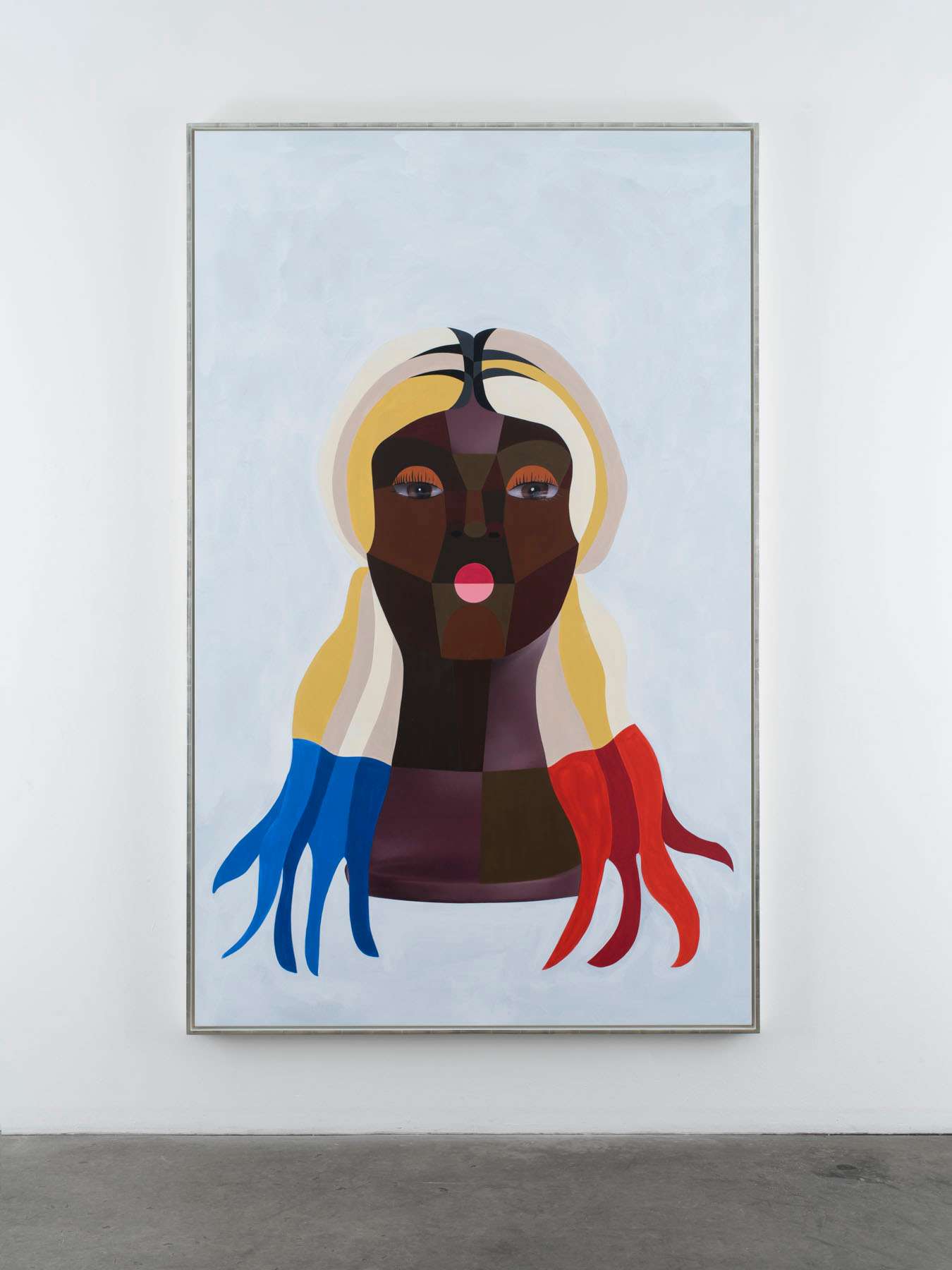 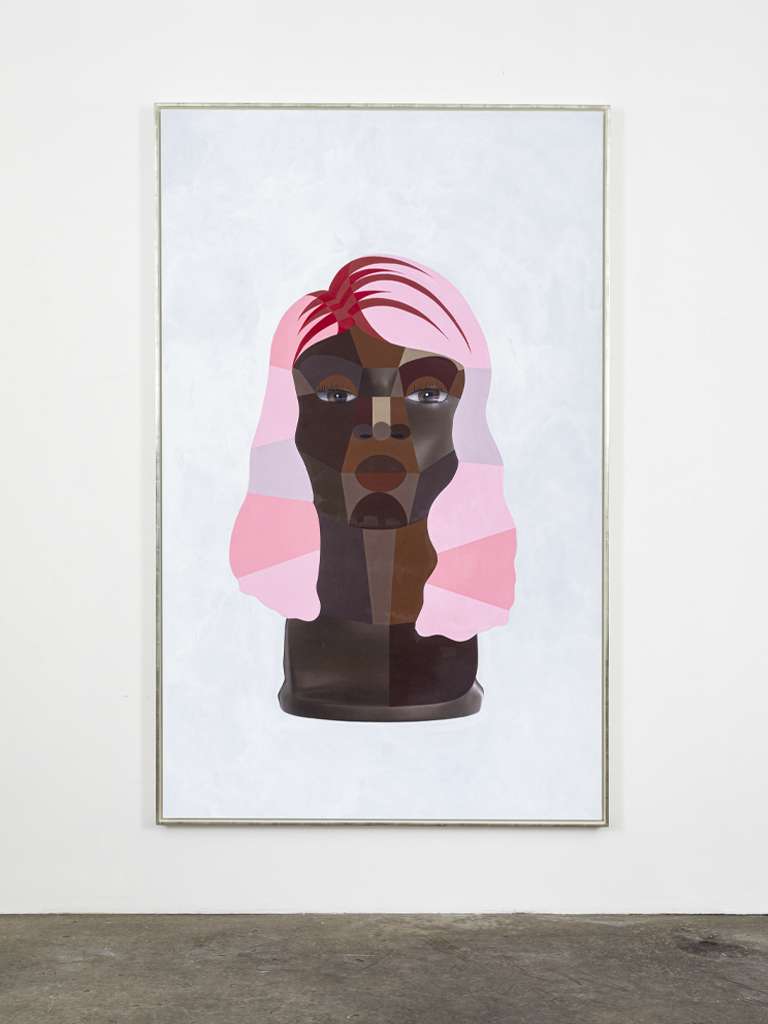 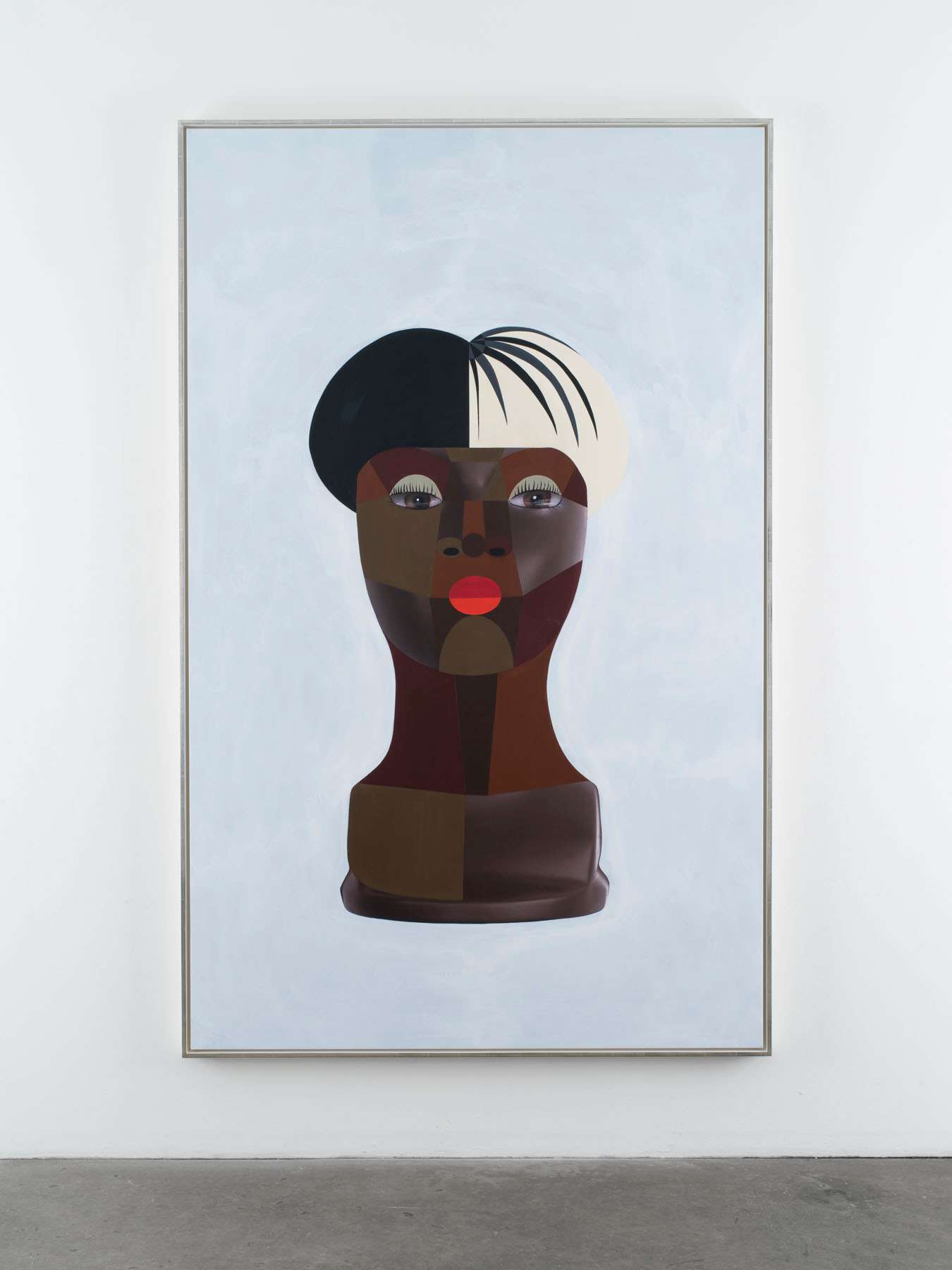 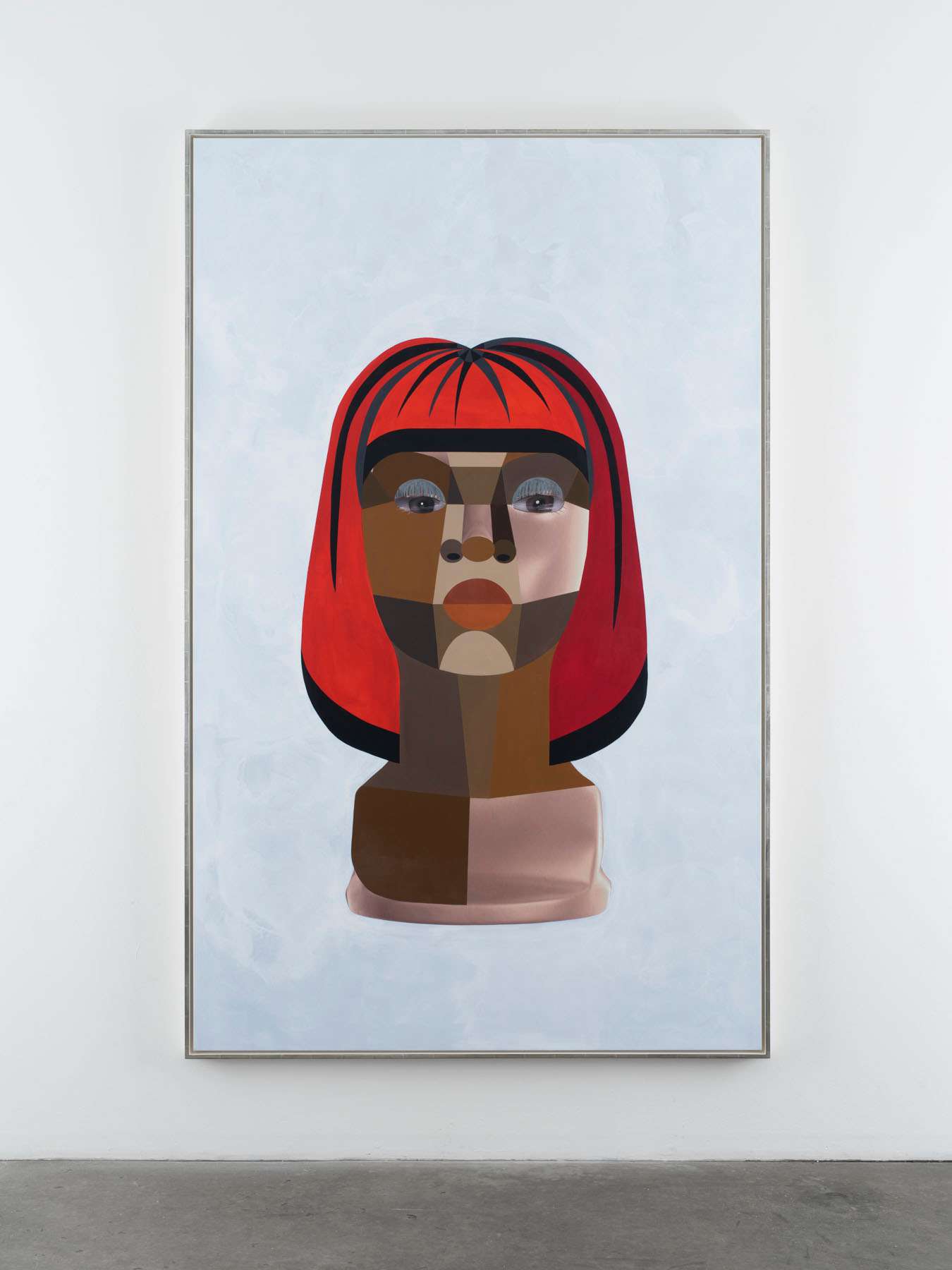 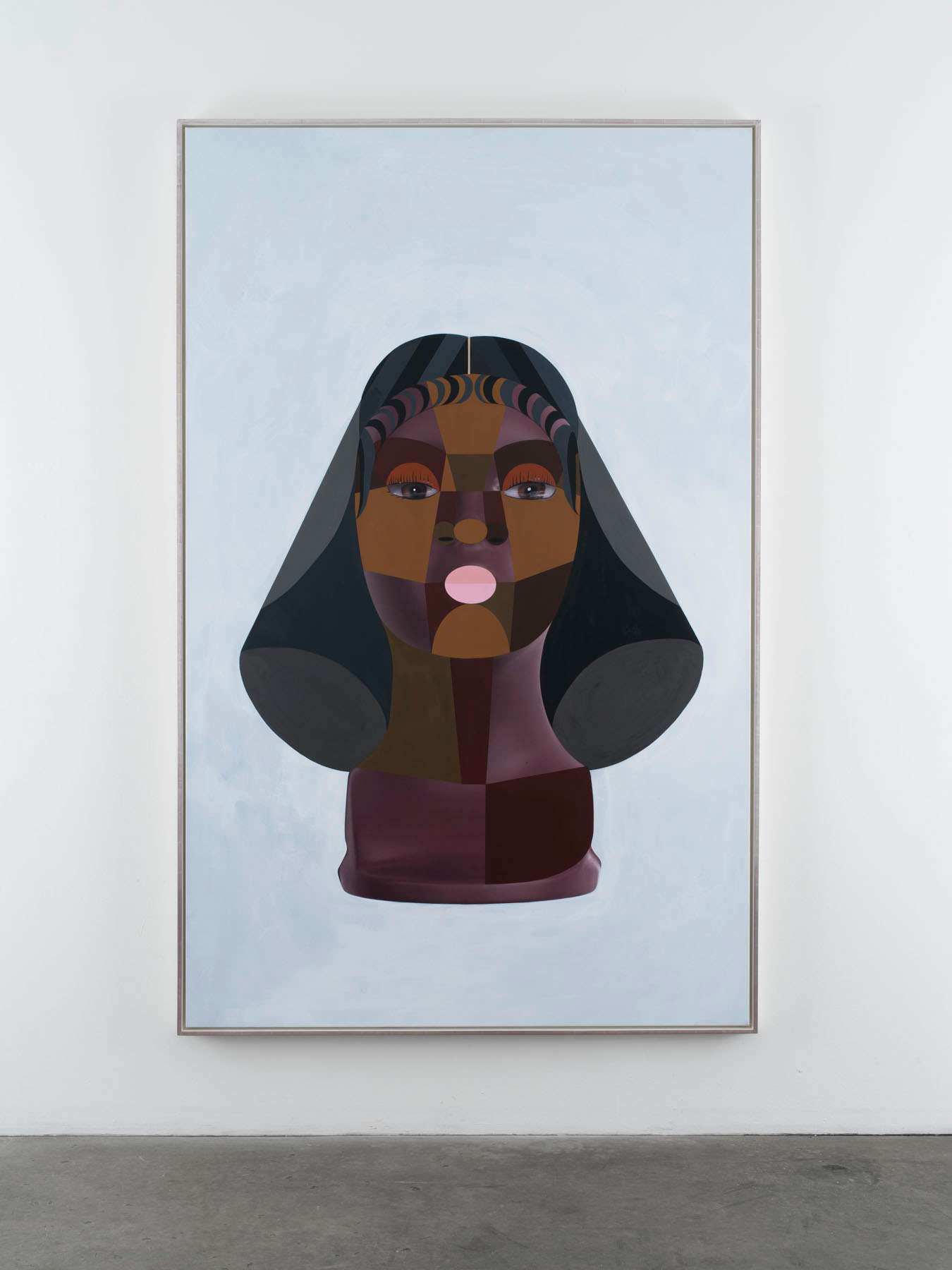 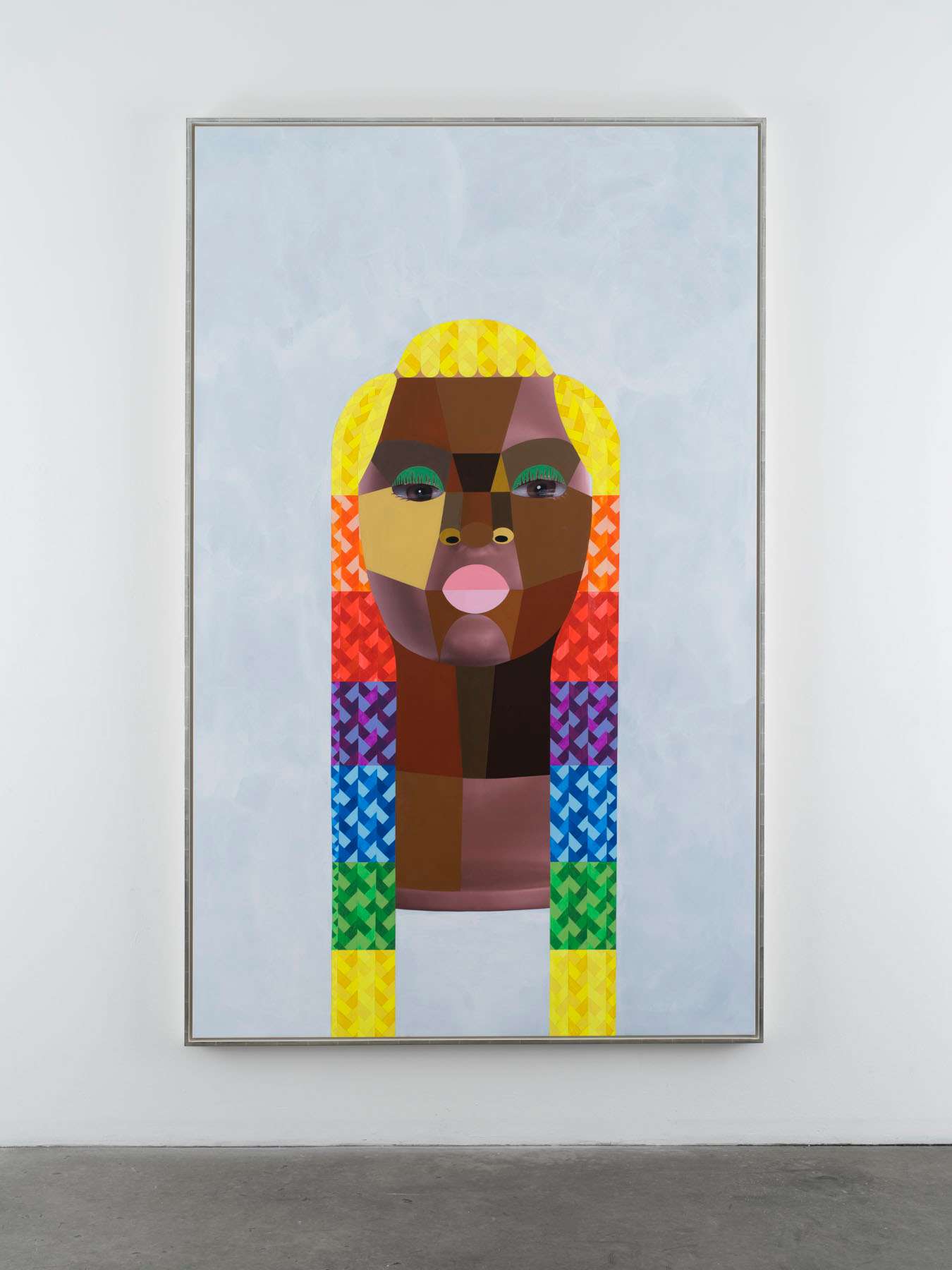 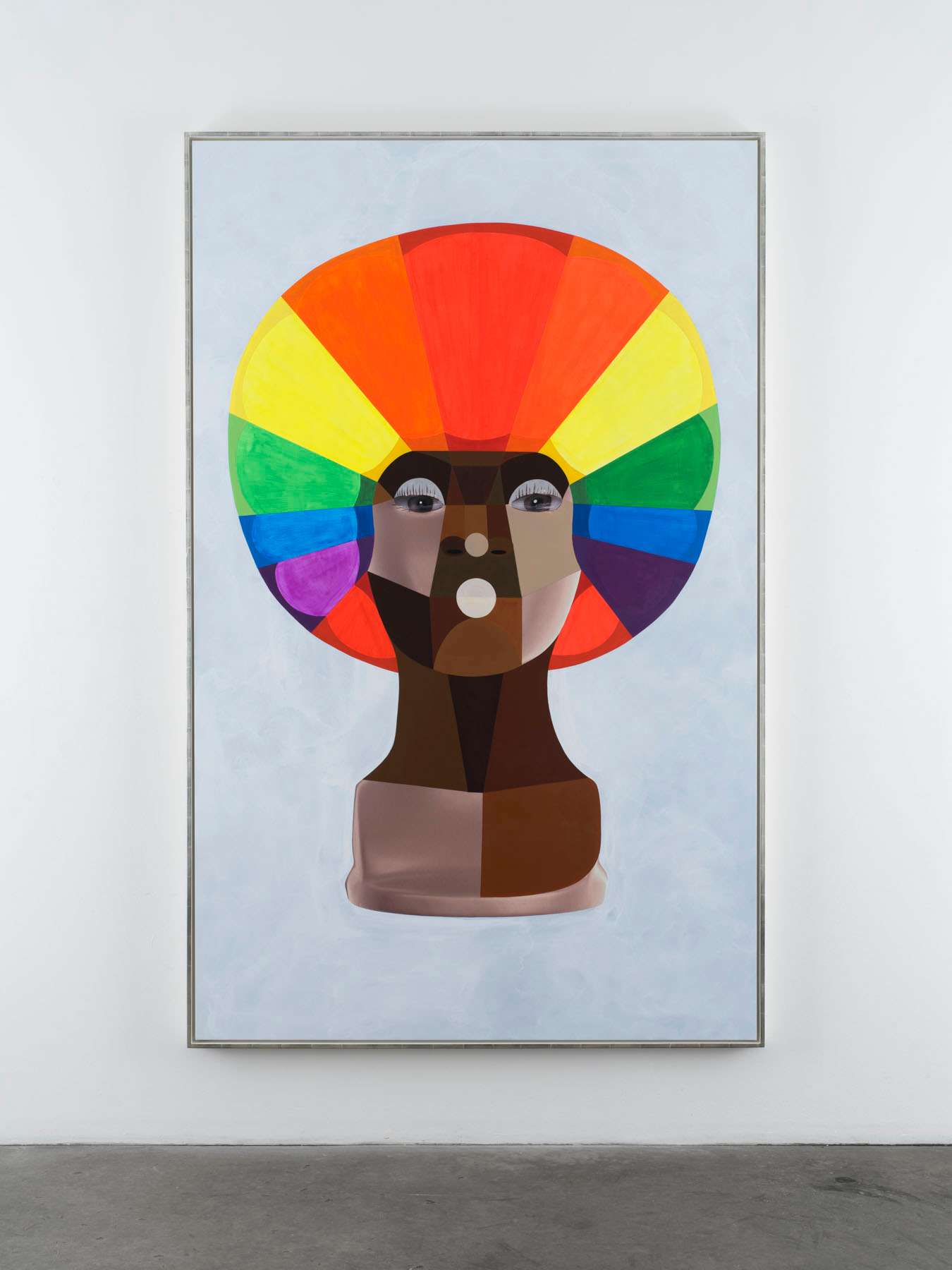 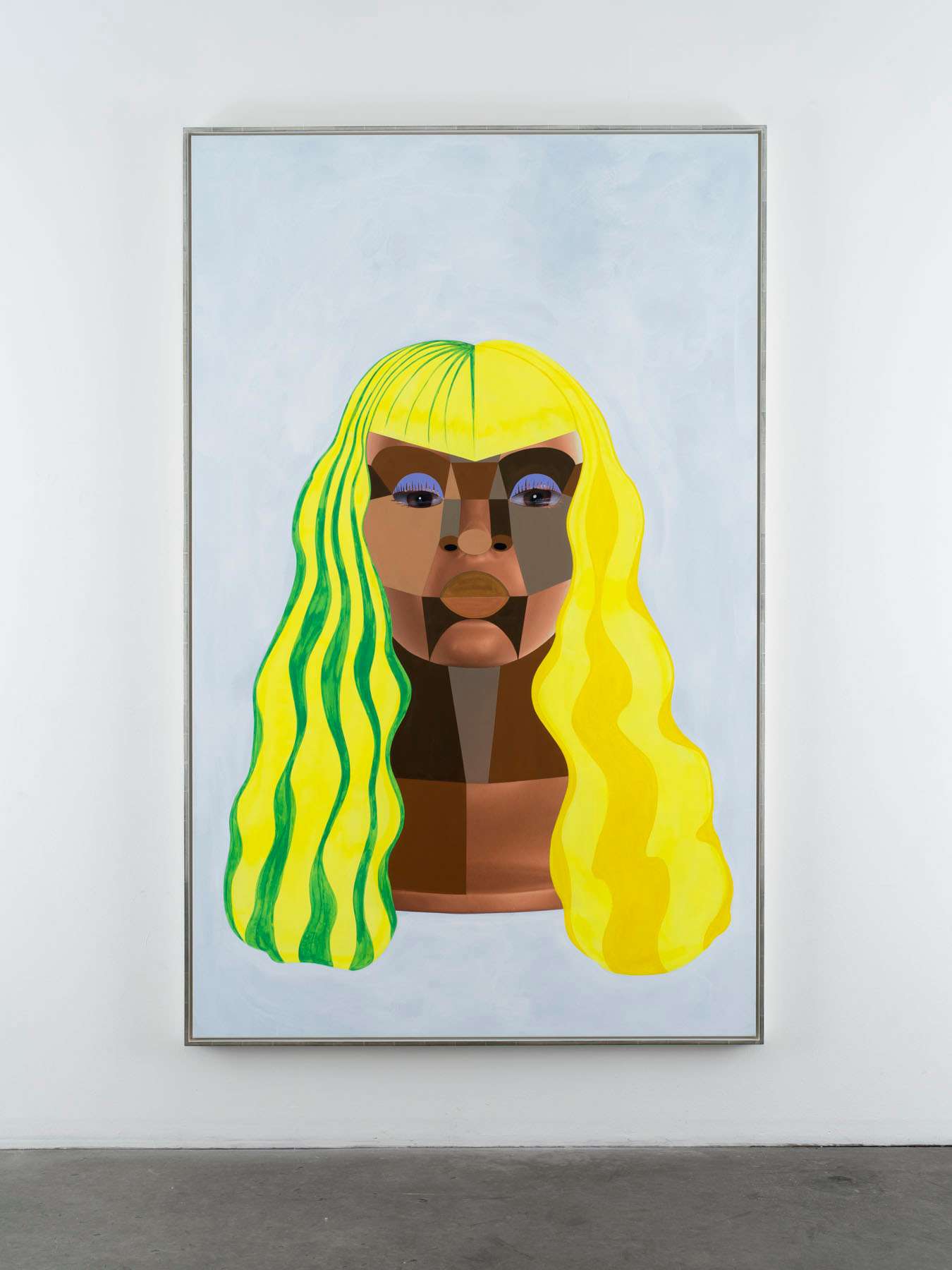 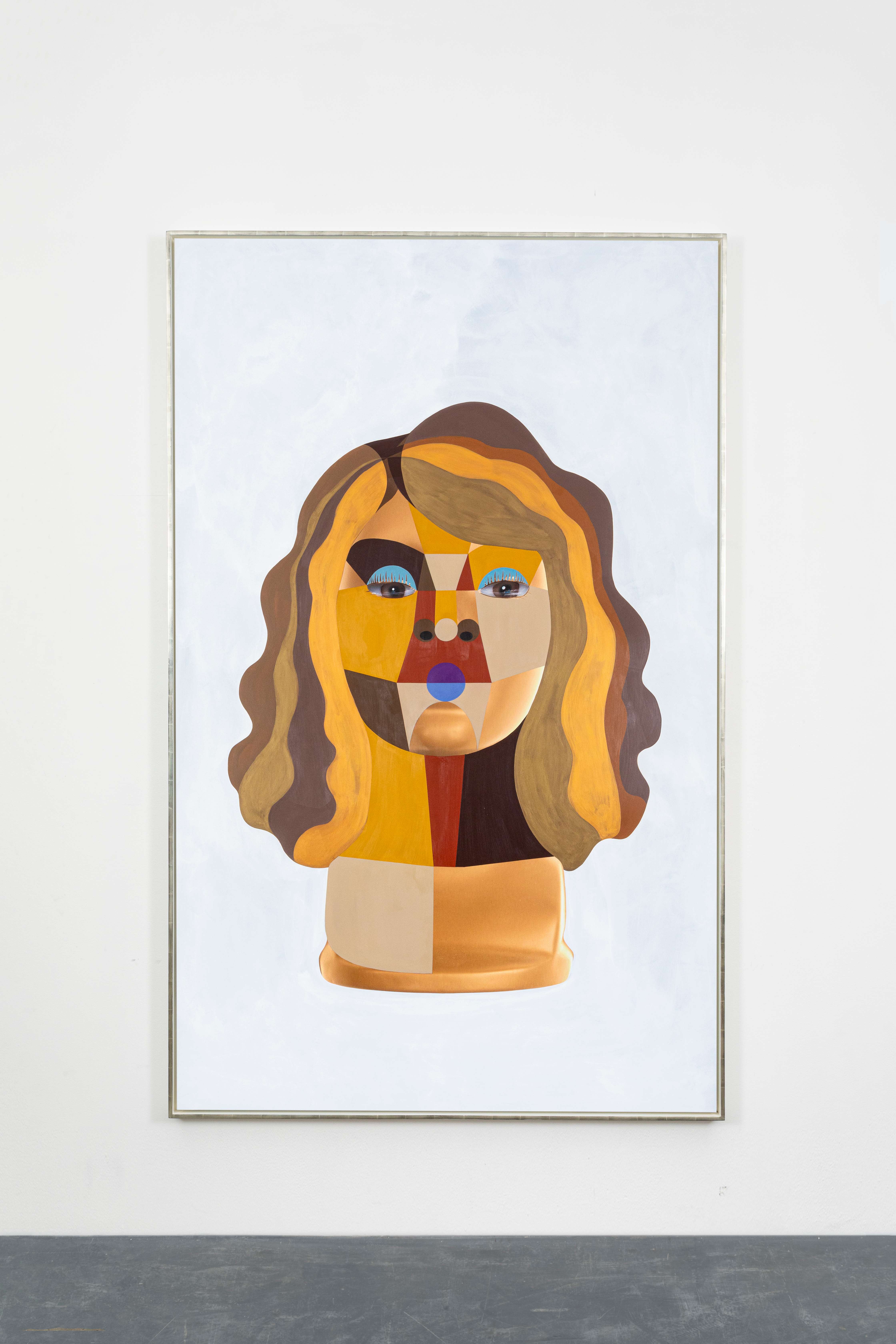 Can the power to shift identity be found in dyeing one’s hair, or changing lipstick color? A simple possibility to transform and redefine one’s own beauty, embrace gender fluidity, and vanquish societal labels and control. Derrick Adams: Style Variations is a collection of ten epic portraits variously and colorfully painted over the forms of a mannequin bust. Through costuming and fashioning, Adams’ monumental portrait series celebrates radical Black joy and self-actualization. Style Variations inaugurates Salon 94’s new headquarters at 3 E 89th Street while transporting us to the windows of wig shops, braiding salons, and hair boutiques in Bed-Stuy—the Brooklyn neighborhood in which Adams has lived and worked for over 15 years.

Adams passes by competing beauty shops daily. Over time he has photographed the storefronts, gathered historic images, and studied style variations from city to city. Venturing inside, he has asked the beauticians about the wigs—“Who made the cuts?” [the answer: apprentice hairstylists], “Do the styles have names?” [yes: Kitty (short cut), Fabulous (a bob), …]—and learned the business hierarchies. A character defined right out of the brand’s box, wigs arrive coined with the names of showgirls or recognizable Black pop stars. Young and new apprentices practice hand-cutting the wigs and styling mannequins. On display to the public, the cuts define street trends. In a year marked by activism, death, and unrest, Adams imagined new styles of his own and together these works might be read as commemorative mourning portraits—one marking lost time with roots grown into ombréd, spidery shapes flagging with dip-dyed red, white, and blue; others sport day-glow cornrows or Afros colored in the LGBT rainbow pride flag. 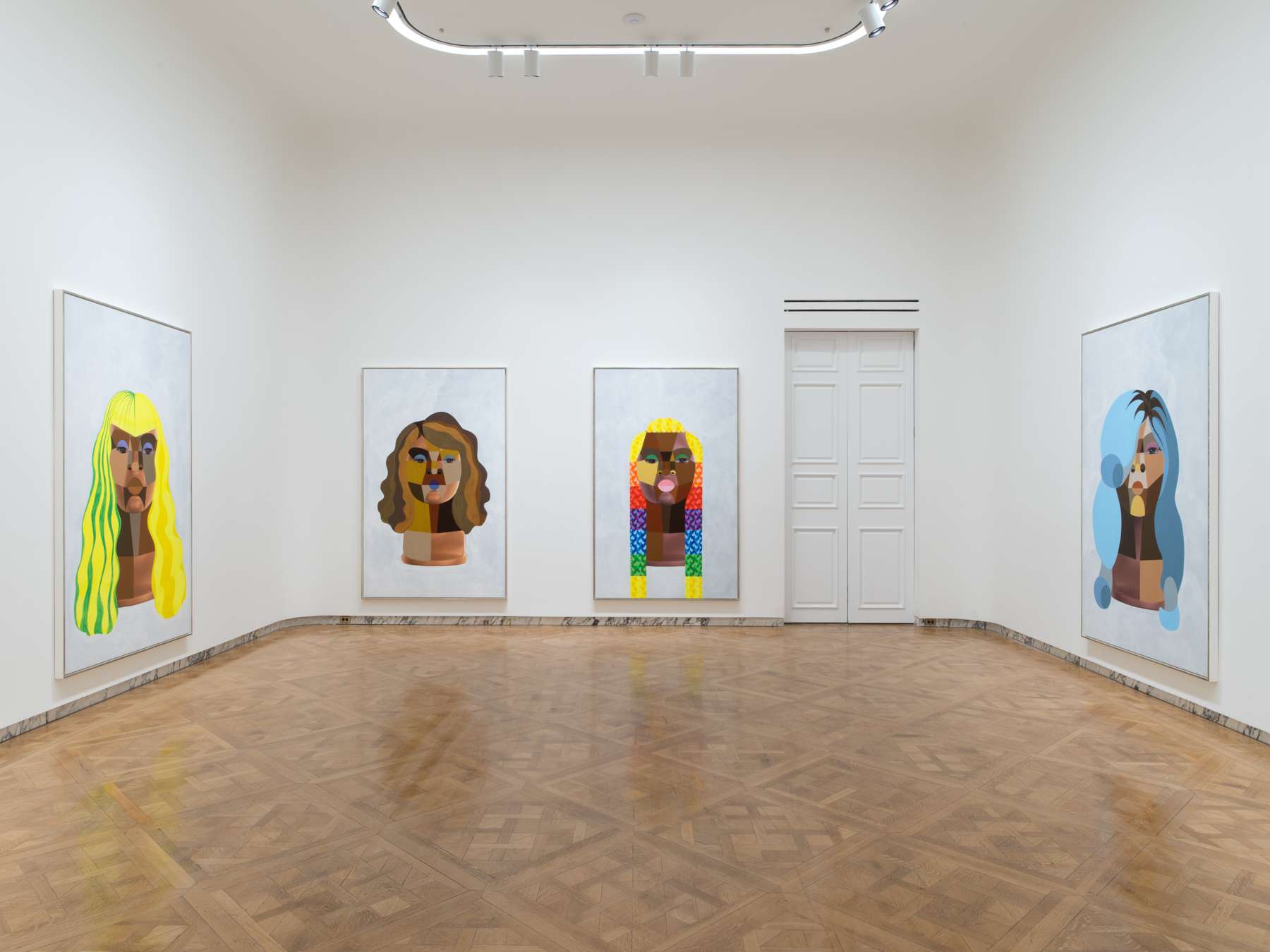 A constant portrait artist, Adams envisioned the wigs worn by friends and on the heads of passersby. In the studio, he began a complex game of painting circles and angles for cheeks, noses, eyes, and mouths on top of the otherwise anonymous mannequins. Intensifying this geometric play further, specific characters have emerged—familiar and of stature. A fellow artist’s young daughter questioned her own skin tone and hair color in his work, further imagining herself with purple lipstick and blue eyeshadow; Adams complied. 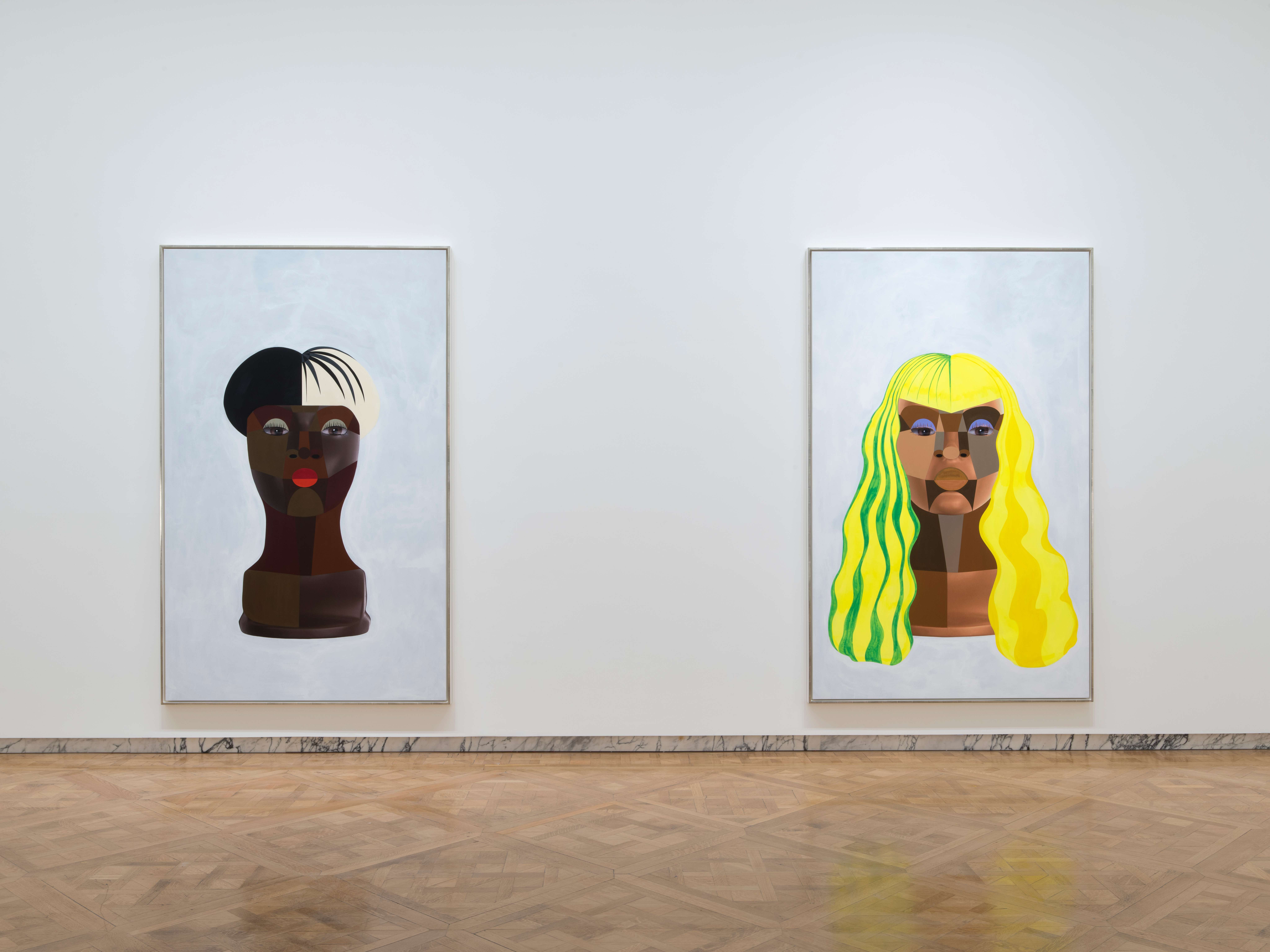 Made up of layers of acrylic and graphite, these cubist-like paintings are in debt to traditional West African masks and sculpture: “My interest in geometric composition began with looking at Benin heads, Kwele masks, Kota reliquary figures and so on,” says Adams. “The exaggerated forms, and the liberties that the creators took, are essential to a viewer’s understanding of the figure’s importance. I became invested in geometric shapes, their volume, and how one feels the weight of an image when something complex is broken down.” The larger-than-life scale and the white backgrounds these flattened geometric compositions are viewed against maintain this sculptural presence; each Sphinx-like, hearkening back to the “periwig” of ancient Egypt.

Ultimately, Adams’ paintings are full of joy and possibility. “I feel more than ever that it is essential for artists to make work that celebrates Black culture. As a Black man, I am aware of my vulnerability and susceptibility to trauma and oppression on a daily basis. I personally don’t need to be reminded of it in art and choose to instead highlight Black normalcy. Those who participate in Black culture understand there are images that are less important for us to see than images of joy.”

Born 1970 in Baltimore, Adams began his career in the twilight years of Conceptual art and the Pictures Generation. As those movements receded from the American art landscape, Adams adapted some of their methods and subject matters—cultivating a decades-long practice colliding art-historical precedent with contemporary Black culture.He alludes to a history of oppression while rejoicing in the liberation of self-determination and the power of Black joy. Style Variations engage the Black community’s complex, empowering, and versatile relationship to hairstyling and wig-wearing, which cultural luminaries—ranging from filmmaker Spike Lee, to musician Nicki Minaj, to actress Laverne Cox—explore and display continuously.

Coining Adams’ Style Variations as “ocular utopias,” where Black people express themselves through style and adornment throughout history, writer and producer

Jewels Dodson writes: “By the mid-20th century, hair had become politicized amidst America’s changing ethnic demographics. For women with curly, kinky, and coily hair textures, wigs became a tool for assimilation; a way to be more palatable to the dominant culture, especially in predominantly white corporate settings. The ‘right’ hair could give a Black woman more access, opportunities, money, and social mobility. A Black woman wearing her hair in its natural state could make her a target in the crosshairs of respectability politics, leaving her vulnerable to punishment and exclusion. Wigs and chemically straightened hair were at a premium through the white gaze. Hair became a type of currency. The narrative of ‘good hair’ and ‘bad hair’ pervaded the Black psyche and a collective undercurrent of shame developed throughout Black culture.”

Adams’ kaleidoscopic figures gaze with a lifelike, knowing stare—their dewy eyes and long “fake” eyelashes bring alive expressions that insist upon their own humanity.His patchwork of color swaths conjure the fashion of Patrick Kelly (whose activist golliwog prints went unspoken in the 80s), the color blocks of Barkley Hendricks, death masks, and together as a series, the Fright Wigs of Warhol—all masterworks.