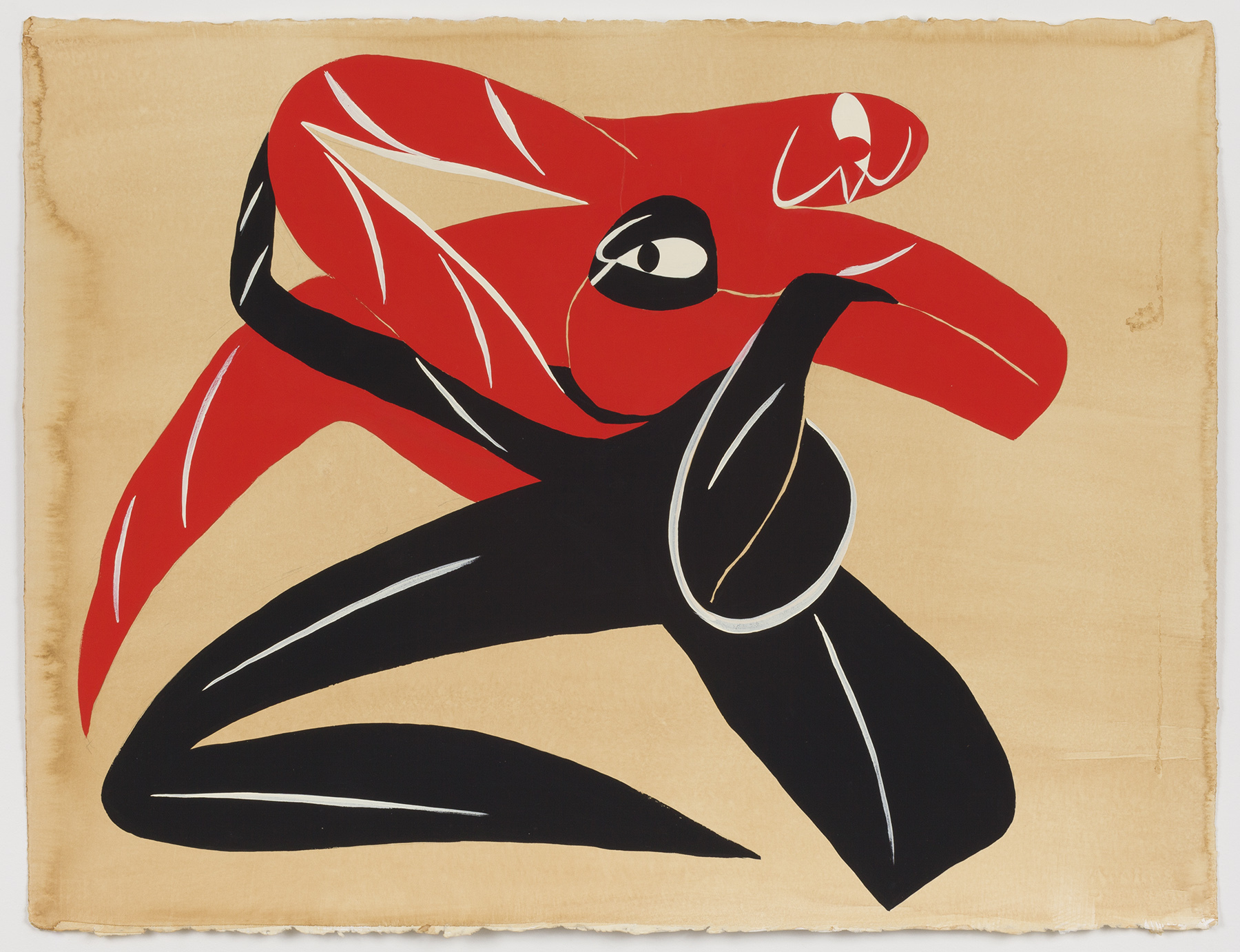 For his third show at Salon 94, Jayson Musson has returned to his roots; drawing. The canny art world chameleon is a master of forms, ranging from antic videos to “paintings” made of dissected Coogi sweaters, to an installation based on the art-historical satire of Ernie Bushmiller’s Nancy comic strip.

Musson himself is something of a cult figure, thanks to his YouTube persona as Hennessy Youngman, deadpan star of the artist’s 2010-2012 art tutorial series, “Art Thoughtz,” which cleverly satirized both art history and the contemporary art world. “Drawing is primal and essential to my art practice. I needed to go back to it,” the artist says. “All my work, no matter what appearance it might take, whether it’s my Hennessy videos or the Coogi pieces, always has an element of historical trauma.”

On its face, Musson’s new body of work is unabashedly old-fashioned: a series of intimate coffee-stained gouaches that tackle both the negative currents in the zeitgeist—including violence and aggression--and his own personal demons. In these drawings, the artist establishes a powerful personal lexicon; call it Haring meets Matisse. The sinuous interlocked forms in Demon All Day, done in primal black and red, resemble both ancient hieroglyphics and newly-minted alphabet letters.

Musson’s early ambition to be a comic book artist is clearly apparent in this series. “When I was a teen, being a comic book artist was my goal. I wanted to tell stories. I wanted to create worlds.” That intention first manifested itself in his videos, including “The Adventures of Jamel” (2015) Musson’s highly comic exploration of American history. The gouaches in the Demon series achieve the artist’s vision in a different way. “I really missed drawing. I don’t have the desire to make large paintings right now. I prefer to create smaller works, where the viewer is not in awe of a giant edifice to my ego. These works on paper are more immediate and more honest.”

The small but potent figures reference art history from Grecian urns to Jacob Lawrence to the Jamaican folk paintings the artist grew up with, and address contemporary issues, including immigration and police brutality, from both a personal and political perspective. The several gouaches entitled Ancestor I, II and III are homages to Musson’s “elders”: his aunt Delphine, his grandfather Henry, and his grandmother Mavis. “As the child of immigrants, I wanted to connect myself to a larger history of people making journeys to places where their children could have more opportunity, which is an experience I do not take lightly, or for granted.” But the personal is also the political: Musson’s Immigrations and Customs Enforcement directly confronts the threat resulting from the Trump administration’s hostile stance on immigration. “It could be my mom, it could be me. The only thing that separates generations of immigrants is the fortune or misfortune of time.”

In Dialectic V, the artist telegraphs the world’s endless penchant for violence; from the recent shooting in Paris on the Champs Elysée to the so-called mother of all bombs dropped on Afghanistan to the rising tensions with North Korea. “The character with the rock is assaulting another character on the ground. No matter how sophisticated the weapons nation-states might employ, it is still a rock.”

And, on a more local level, the powerful Loosie is a depiction of the Eric Garner tragedy. Gender politics also come into play: Odalisque’s Refusal shows a menacing male figure and a prone female. “The vast majority of the canon of Western art is to satisfy the male gaze,” the artist says. “This is about the object of male contemplation rejecting the gaze, the simple refusal of that access.”

But the Demon gouaches also have a lighter side. In The Center of the Universe, Musson pays tribute to both Courbet’s Origin of the World and Duchamp’s Étant Donnés. Moet with Medusa refers to the Nas lyric “I sip Moet with Medusa, give her shotguns in hell” (from the rap song It Ain’t Hard to Tell). “It is really about being an underworld figure, a black Orpheus,” says Musson.

The Ocean (is you)--by far the simplest gouache in the show depicting elegant Calder-like black ripples--provides a seemingly hopeful antidote to the exhibit’s fraught allegorical message. “It’s about the unconscious, the depths that everybody holds. No matter what they perform in their social lives, there are vast unknown depths to everyone. And so it’s a reflection of everything that people hold inside, and their potential.”

Jayson Musson has had solo exhibitions at Salon 94, New York; Fleisher/Ollman, Philadelphia, PA; Pennsylvania Academy of the Fine Arts, PA; and Dazed & Confused Magazine Gallery, London, UK. Musson and Alex Da Corte collaborated on an exhibition at the Institute of Contemporary Art, Philadelphia, titled Easternsports in 2014 which then traveled to Mass MoCA and was shown as part of Dreamlands, a group show curated by Chrissie Iles at the Whitney Museum of American Art, New York in 2016. Musson has been featured in numerous group exhibitions at venues including Contemporary Arts Museum, Houston, TX; Grey Art Gallery, NYU, New York; Galerie Perrotin, Paris, France; Hyde Park Art Center, Chicago, IL; Yerba Buena Center for the Arts, San Francisco, CA; and Cincinnati Contemporary Art Center, OH, among others. Musson received his BFA from the University of the Arts, Philadelphia in 2002 and his MFA from the University of Pennsylvania in 2011. He attended the Skowhegan School of Painting and Sculpture in 2011. His work is in the collection of the Museum of Modern Art, New York, The Philadelphia Museum of Art, Philadelphia, and the Whitney Museum of American Art, New York.

Salon 94 Freemans is located at 1 Freeman Alley off of Rivington Street. The gallery is open Tuesdaythrough Saturday 11 am – 6 pm. For all press inquiries, please contact Sophie Wise | Company Agenda | sophie@companyagenda.com | 212-358-9516.