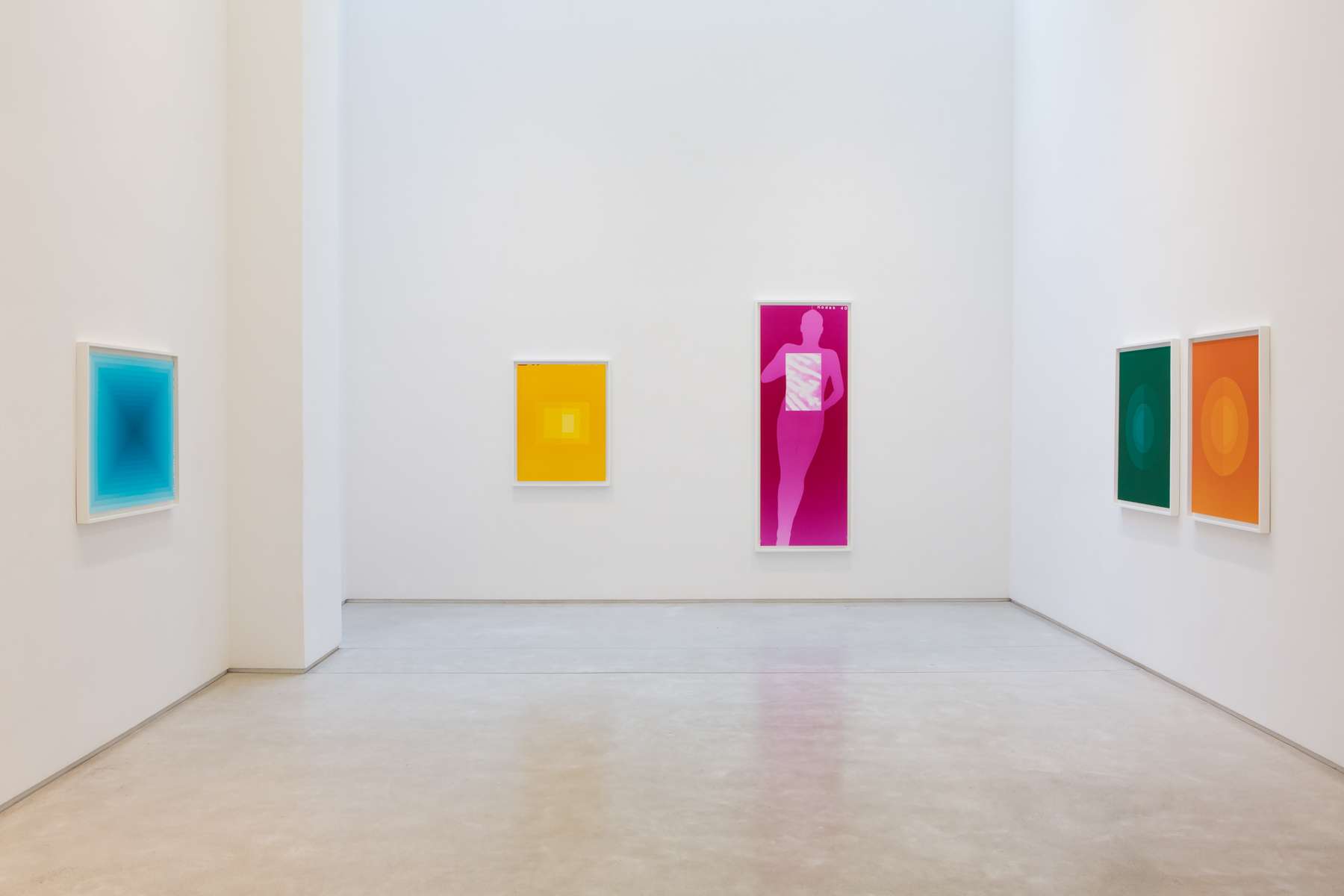 Enacting a series of performative movements in the darkness, with a virtuoso command of photographic techniques, David Benjamin Sherry has created a group of unique photograms full of saturated color and cosmic depth.

Pink Genesis, David Benjamin Sherry's third exhibition at Salon 94, features a group of new photograms that celebrate the transformative potential of the darkroom as an activated, ecstatic space. Enacting a series of performative movements in the darkness, with a virtuoso command of photographic techniques, Sherry has created a group of unique photograms full of saturated color and cosmic depth.

Over the last decade Sherry has become recognized as one of his generation's most innovative practitioners of analogue photography, remaining firm in his dedication to traditional processes. He has explored the large-scale American landscape photograph, the physical disruption of the photographic surface, and the changing role of documentary images. His work has been characterized by an ongoing exploration of queer perspectives, and he has frequently used his own body as a subject and site of visual experimentation.

Since photograms do not require the use of a camera, Sherry's newest works find him advancing even further into the alchemical heart of photography. Unlike black-and-white photograms, which allow for the use of a minimal amount of light in the darkroom, Sherry's color versions require complete darkness. While working blindly, Sherry’s years of printing his own work have given him the familiarity and the ability to move through a pitch black room as he adjusts his props––cardboard stencils, his body, sheets of printed acetate, his dog––before exposing the paper to the light of the enlarger.

His photograms can be divided into two basic types: precise geometric abstractions and freer, improvisational compositions in which the artist's body appears as subject.

To create the geometric works, Sherry makes hand-cut cardboard templates that he exposes on the paper to light in highly controlled intervals. He uses the enlarger in an unconventional fashion, intentionally misadjusting ratios of cyan, magenta, and yellow to produce extremely vivid colors. The photograms are printed on paper with a deep matte finish, allowing for levels of saturation that often make the surfaces feel more like paintings.

For Sherry, photography is a tool for connecting the entire body to its surroundings. In the new photograms in which his body appears, this intimacy is given literal expression as the artist puts himself in direct contact with the paper, posing on the enlarger table itself. Each of the artist's movements require both planning and a willingness to surrender to the unpredictable choreography of the moment. Sherry makes use of specially prepared sheets of acetate that incorporate visual patterning drawn from an array of digital sources. Their presence reaffirms the links between technological image production and human physicality.

Most of the figurative photograms are dense, multi-layered compositions, but Pink Genesis (Self portrait with Mars), 140C0M25Y, 2017 depicts the entire uninterrupted length of the artist's body in stark silhouette. The background surrounds him in a deep shade of pink; on a radiant white rectangle, which appears to be held between his hands, are graffiti-like textures sourced from images taken during a NASA satellite expedition to Mars. Though photography allows us to see things far beyond the reach of our own eyes, Sherry has made a group of works that celebrate––and are dependent upon––the limitless expanses of touch.

David Benjamin Sherry (b. 1981, Woodstock, NY) currently lives and works in Los Angeles, CA. He received a BFA from Rhode Island School of Design in 2003, and his MFA from Yale University in 2007. His work has been included in Greater New York 2010, at MoMA PS1, LIC, NY; The Anxiety of Photography, Aspen Art Museum, Aspen, CO; Lost Line, Los Angles County Museum of Art, Los Angeles, CA; and, What Is A Photograph?, International Center for Photography, New York, NY. His work is in permanent collections at the The Nasher Museum of Art, Durham, NC; Walker Art Center, Minneapolis, MN; Wexner Center of the Arts, Columbus, OH; Los Angeles County Museum of Art, Los Angeles, CA; and the Saatchi Collection, London, UK. Earth Changes, a catalogue of Sherry’s landscape work, with an essay by LACMA curator Britt Salvesen, was published in 2015 by Mörel Books, London.