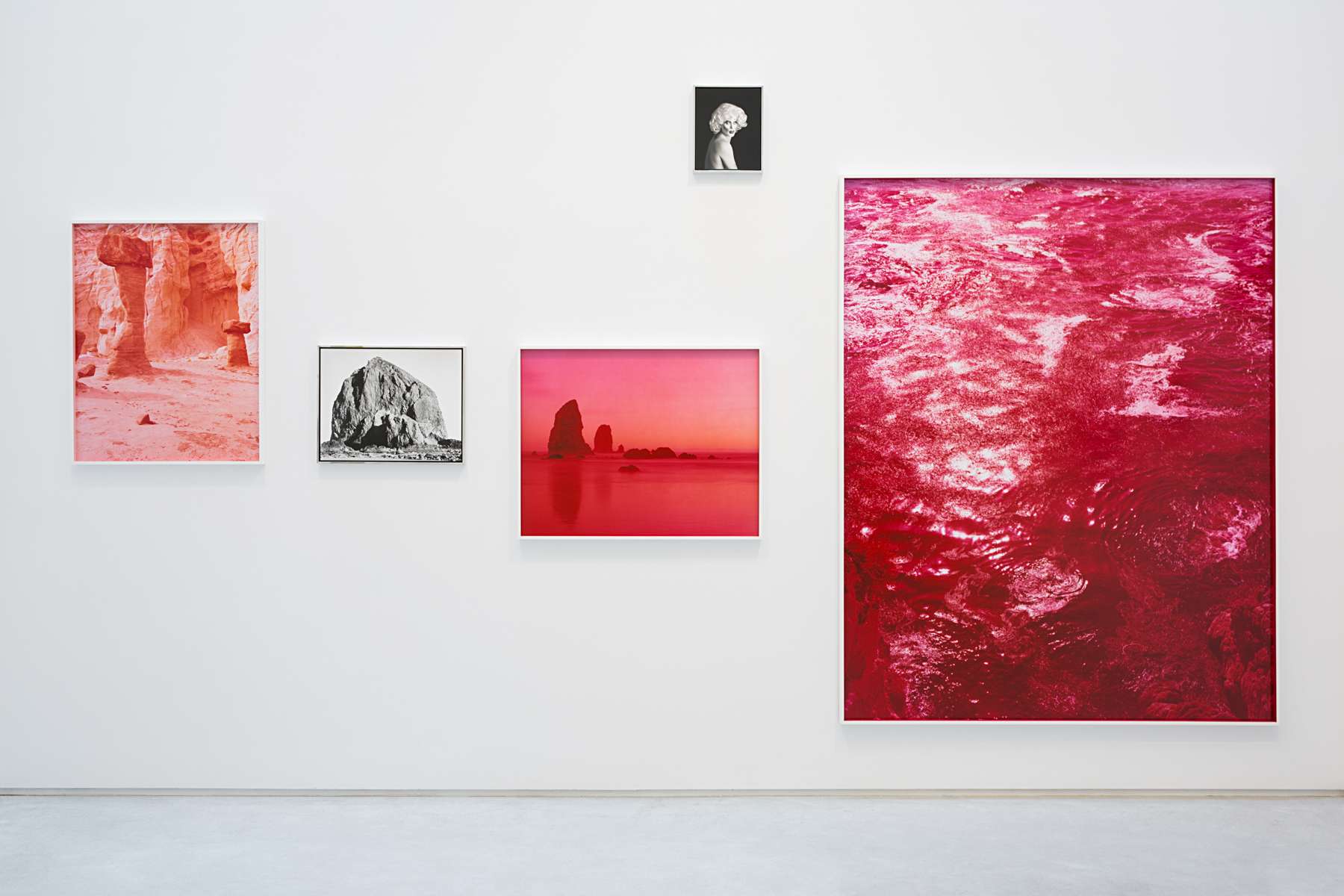 For the first time, Sherry juxtaposes black and white works, printed in traditional Gelatin silver process, with the energetic infusions of color that afford his landscapes an otherworldly quality.

David Benjamin Sherry is an explorer. He is a master of bold, sensual color. He ventures deep into the American wilderness and reimagines the surfaces of nature as if seen through a kaleidoscope. Part-archeologist and part-futurist, Sherry uses 8x10 film negatives and analogue techniques in order to speak to new technologies and our changing physical world.

Sherry’s latest works take on photography’s canonical genres, including landscape—which he is most well known for—as well as still life, portraiture, the nude, collage and darkroom photograms. There are more waterscapes than landscapes – it’s a murkier, more mysterious realm. Many of these compositions sit at an uneasy intersection of travel photography and surveillance imaging. A sunrise behind a boulder in the water is somehow both a picturesque postcard and a strange alien spotlight. Another large-scale image of ripples on the surface of a body of water, without a horizon, are stained glowing, neon red, a color that implies blood or a dangerous kind of heat as if on a topographer’s or meteorologist’s map—though not quite the right shade of either.

Sherry’s colors are surreal and often monochrome and painterly. A large degree of the compositions are achieved by the artist in the darkroom. His exaggerated hues border on acidic and futuristic, imbuing his sense with glowing sci-fi, filmic attitudes.

Sherry’s colors are surreal and often monochrome and painterly. A large degree of the compositions are achieved by the artist in the darkroom. His exaggerated hues border on acidic and futuristic, imbuing his sense with glowing sci-fi, filmic attitudes. Sherry’s particular, syncopated color palette gives sentiment and rhythm, setting up his scenes with suspense. This setup is a direct engagement to our changing physical world. Sherry’s acid-toned pictures, while beautiful, are also critical of the close human relationship to recent climate change. They consider what critics call “the anthropocene” – or, geology and the ecosphere as it has been impacted by human activity.

In addition to mapping the rarely visited sites of the earth, Sherry also shoots the personal territories of the body. One photograph of a nude man in body paint, shows him reclining in feminine odalisque pose against a stark black backdrop. Resembling a hand-painted black and white photograph, the image both exposes the man’s body and shields his flesh in a rainbow of color, shaped in an arch, as if constructing him as a spectrum of light in a night sky. Another image of two men, covered in thick black petroleum, kissing, is a noir romance. Shooting bodies like land surfaces, Sherry stages still performances like a reverse landscape – the impact of changing nature on our adapting skins.

For the first time, Sherry juxtaposes black and white works, printed in traditional Gelatin silver process, with the energetic infusions of color that afford his landscapes an otherworldly quality. Moments of exuberant color are tempered by abstract and introspective black and white nudes, shot like terrain or anthropological subjects. Seen from below, chunks of melted icebergs are shot in rich black and white portraying an eerily decadent vista. An orange-stained image of an endangered species of frog is captured precariously dangling from a blade of tall grass. Sherry’s idiosyncratic vision crystallizes a breathtaking yet fearsome universe.

Moments of exuberant color are tempered by abstract and introspective black and white nudes, shot like terrain or anthropological subjects.

David Benjamin Sherry was born in 1981 in Woodstock, NY and currently lives and works in Los Angeles. He received his BFA from Rhode Island School of Design in 2003 and his MFA from Yale University in 2007. Sherry is an analog photographer and an avid darkroom printer who pushes extreme and often monochrome color. He experiments with the historical genres of his medium, reinvigorating photographic types and creating new kinds of darkroom and print manipulation.

Sherry is represented by Salon 94, New York and OHWOW, Los Angeles. His work is part of the permanent collections at the Wexner Center of the Arts, Columbus, Ohio, Los Angeles County Museum of Art (LACMA), and the Saatchi Collection, London. His work was included in Greater New York at PS1 MoMA (2010), New York, The Anxiety of Photography at Aspen Art Museum (2011), Lost Line at LACMA (2013), and most recently in, What Is A Photograph? at the International Center for Photography, New York (2014). The artist’s latest book Earth Changes, with essay by LACMA curator Britt Salvesen, was recently published in September 2014 by Mörel Books, London.

Sherry has a simultaneous exhibition of photographs made over the last two years on view at Danziger Gallery, New York from September 11th – October 25th. The artist will be included in the exhibition FotoFocus Cincinnati opening this fall. His work will be presented alongside the artist’s selection of historical photographs from Cincinnati private collections.